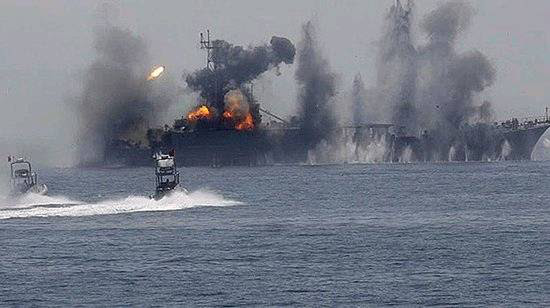 “They sunk my damn navy”.

This is more a post about military theory than about wargaming, but there’s an interesting crossover.  Yesterday I came across the story of Millennium Challenge ’02 (MC ’02) by Micah Zenko, a well-known US defence journalist.

MC ’02 was a major military simulation carried out by the US military in 2002.  The goal was to imagine military conditions in 2007 in a war between the US and Iran.  Iran, or the Red Team, led by a maverick and imaginative general, was given limited resources to defend against Blue Team  -  a US fleet with technology and abilities beyond what was foreseen to come online in 2007.  Using an imaginative and asymmetrical plan, the Red Team essentially destroyed the US force by swarming it with a mosquito fleet.

After an initial shock, the Blue fleet was refloated, the Red Team hobbled, and the exercise was allowed to follow a script that ended up validating US military doctrine.  The fortunate result of MC’02, however, was that it led to more freedom for Red Teams in military wargames and less tolerance for scripted outcomes.

Just out of curiosity, I flipped the link on Zenko’s story to my brother the Mad Colonel, who spent 15 years after retiring from the Army running simulations for military clients in a location that will remain nameless.

"I can say quite categorically that the friendly side never lost a war game in X.  Ever.  The force ratios were always in favour of the blue side and the control as such that even if it looked like blue might be threatened (which very rarely happened), control would step in to correct the situation.  I only ever had one force-on-force event when the CO of [XYZ Regiment] had his squadron commanders play a capture the flag (hill) scenario. We tried to suggest to the training audience to give the Opfor commander free reign, even with a much weaker force, but it never happened.  I was told very often that having blue get badly beat up would be bad for morale! It did not matter that they walked away with false conclusions of their state of training or their combat effectiveness."

My brother’s anecdote made me wonder about the limitations of wargames and simulations in situations, such as military training, where sometimes there are vested interests to produce certain outcomes.   Perhaps a new doctrine or technology needs to be proven desirable for procurement, or reputations of certain commanders need to be upheld, or morale needs to be protected. Of course there are exceptions, where military exercises allow opposing forces the freedom to seriously challenge and even embarrass the Blue Team.   A good example of this is in Dan Bolger’s 1991 book, Dragons at War: Land Battles in the Desert.  Bolger describes his experience as a US Army company commander, whose unit was sent to the National Training Centre at Fort Irwin in the Mojave Desert.   The NTC was home to a highly specialized OPFOR, trained to simulate a Warsaw Pact mechanized force which often beat the simulated crap out of the units sent for training.  Steve Whitesell, owner of the excellent blog Sound Officer’s Call, tells a great story about getting Bolger, a general by then, to autograph one of his books while they were in Iraq.

So while not all military simulations were as corrupt, to use Zenko’s word, as MC ‘O2, it’s worth asking what assumptions and desired outcomes are built into these sorts of exercises.  It also leads me to wonder if , sometimes, hobbyists might actually do wargames more honestly than militaries.   Wargamers don’t have careers to protect or enhance.  We don’t have morale to protect, or cherished doctrines or weapons systems that we want to show in the best light.   We’re usually just interested in who comes out on top.  Mind you, our wargames, rules sets and historical research can be  subject to our own pet theories, prejudices and assumptions, but that’s for another post, perhaps.