It took Frenchy Lamoreux a day and a half to snowshoe down from the mountains and into town.   Normally he gave the Mounties a wide berth, as did most of the trappers.   It wasn’t that he had anything to hide, he was as honest as any man, but where the redcoats were, it wasn’t long before the surveyors and the mining men and the road crews appeared, taking his way of life away bit by bit.

He shrugged when he reached the simple cabin of the RCMP detachment.   “Tant pis.  On fait ce qu’il faut.” 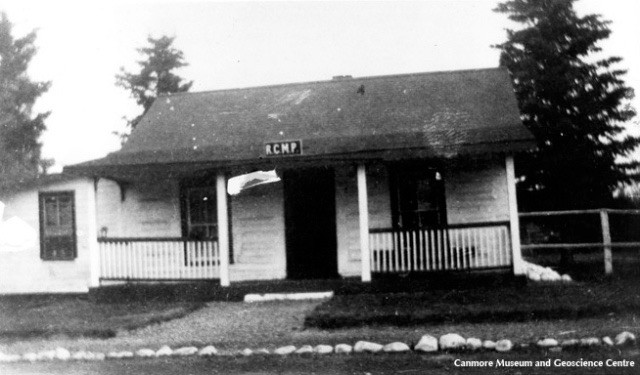 “Sergeant Craig’urst”, he nodded to the man in red serge behind the desk, as a friendly, hawk-nosed face looked up.   Craighurst was well known to the trappers as a fair and decent policeman, someone who knew the woods and mountains as well as any one.

“Frenchy!”  Bill Craighurst’s bantam figure rose easily as he offered his hand.   “What brings you down to town?” 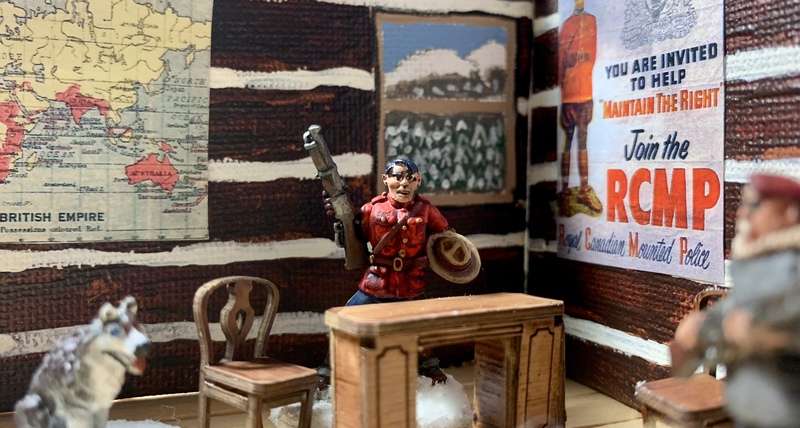 “Not any t'ing good, Sergeant.  Maybe you ‘ave coffee on dat dere stove?”

“Of course.   Sit down.”   Craighurst poured thick strong coffee into an enamel mug and handed it to the trapper.   “Tell me your news.”  He could see something haunting the other man’s face as Lamoureux sipped the coffee and gathered himself.

“You know old Grainger, ‘ee ‘as dat claim up on Indian River, nearby of me?”

“Scotty Grainger, yes.   Keeps to himself, but never troubles anyone.   By all accounts a good neighbour.  What of him?” 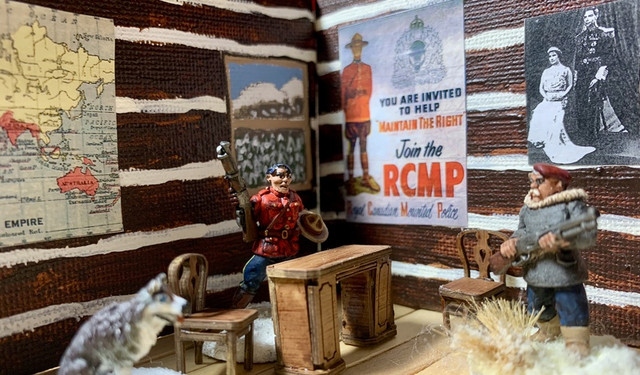 Lamoureux stared out the window behind the mountie’s desk for a moment.   "I t’ink ee’s dead, Sergeant.”  He told the story about finding the blood-soaked snow.

“The last time Grainger was in town, he spoke ill of another trapper, the Serb, Gligic.  Accused him of stealing his furs. Even threatened him.  Do you think there was bad blood between the two?”

One look at the trapper’s face told Craighurst not to ask for his company.  The man was clearly spent.  “Eh, you go if you want, Sergeant.  But as dey say, attache ta tuque."

Here are two Very Good Doggoes (are there any other kind?) for my 1930s pulp project, The Rockies Ablaze.   These good puppers are from Bob Murch’s Pulp Figures range of Yukon Adventure figures. 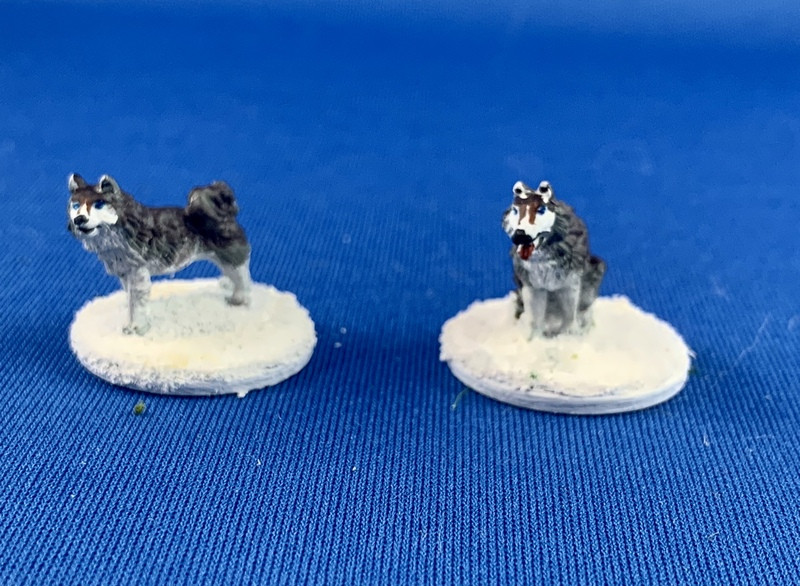 My wife Joy has had two Siberian huskies in her life, both sadly gone across the Rainbow Bridge, but our house is replete with pictures, which I used as inspiration.   Joy holds that huskies are the most beautiful animals that God ever made, and I am inclined to agree with her. 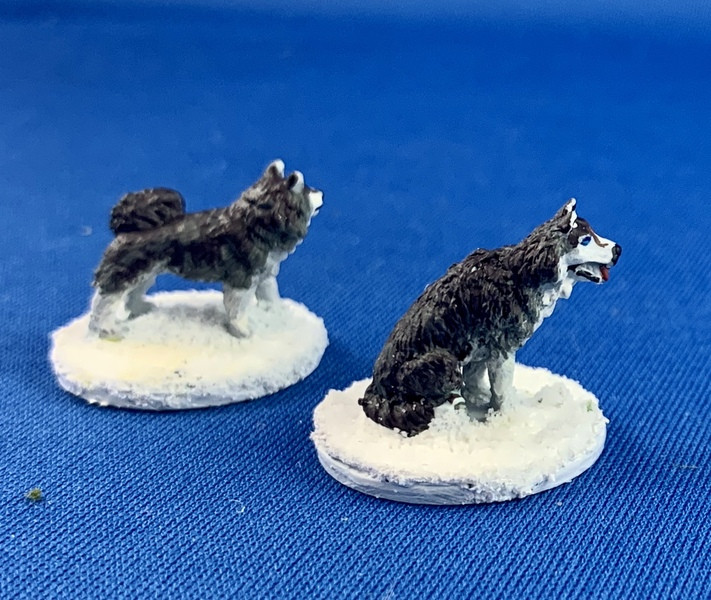 Of course, Mounties need husky sidekicks.  Maybe not Constable Benton Fraser from the TV series of the 1990s, Due South, but perhaps his grandfather. 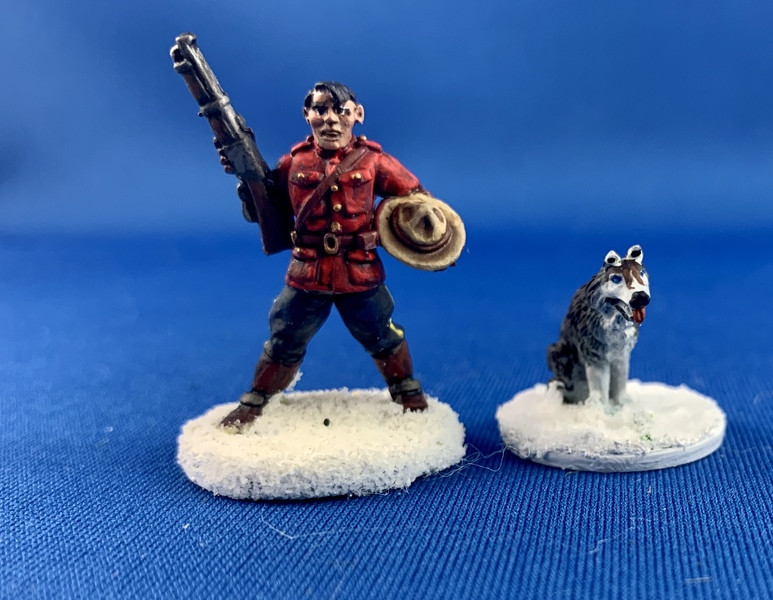 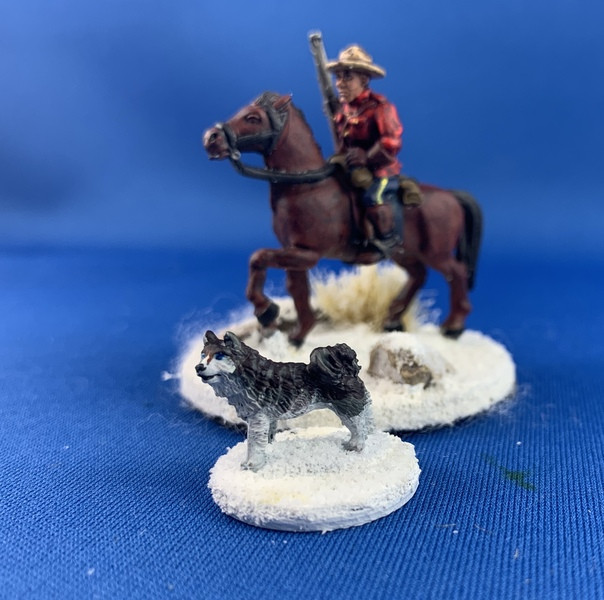 Sadly our house no longer has a resident dog.  Our very good girl Dinah came to the end of her road last week.   Joy adopted her three years ago after her owner passed away.  Dinah was already elderly then, and while she got deaf and started losing her sight, she had a good life until recently  when her ability to walk and keep clean declined, and we decided to let her end her life in peace and dignity.  I suspect the only dogs here in future will be miniature dogs, as we hope to travel once Covid is over, but you never know. 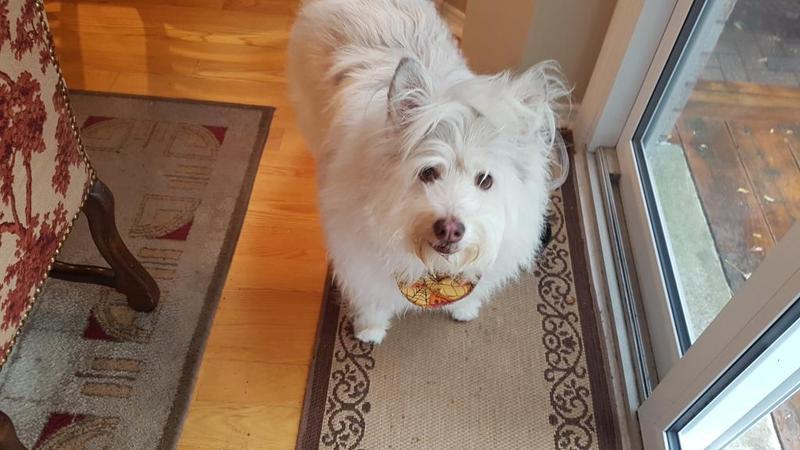 Blessings to your brushes and to your furry friends!

I’m always on the lockout for whimsical figures for my pulp gaming project set in the Canadian Rockies, including animals.   Hikers in the Rockies know all about bears, and what could be more dangerously Canadian than a bear?    I found this fellow on the Northstar Minis website, a Frostrgrave model, I think, and he looked the part.   Why he is up and angry in the middle of winter?   I’d be cross too if someone woke me from hibernation! 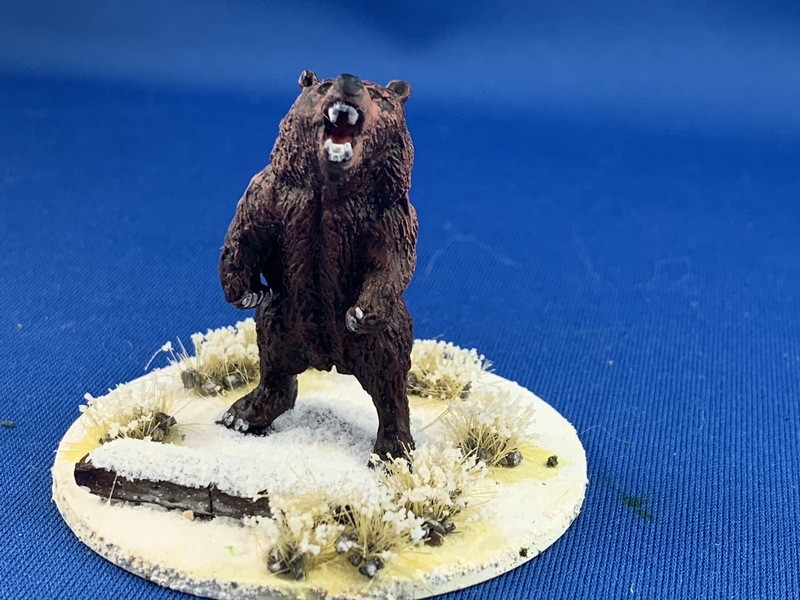 Once I noticed it in this photos, I wasn’t happy with the yellow blobs of glue left around the winter tufts by my white carpenter’s glue, so I went back with some white pain and cleaned them up.  Sometimes it takes a camera to see things. 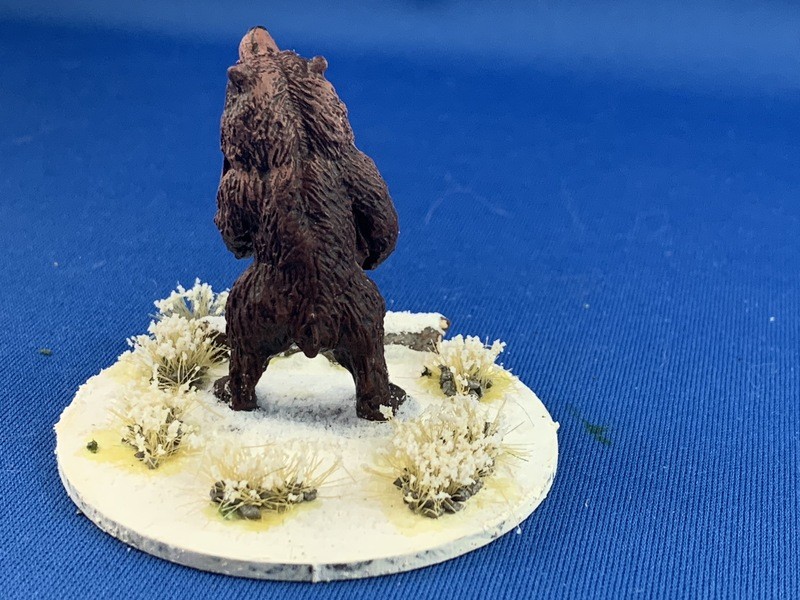 If you think the winter bear is a chonk, meet his resin friend from Thistle and Rose miniatures, their B01 Were Bear model.  He is HUGE by comparison.  He has a forst/grass base because he will be a possible option for my Elven Woodland Forest army for Dragon Rampant, a single base model. 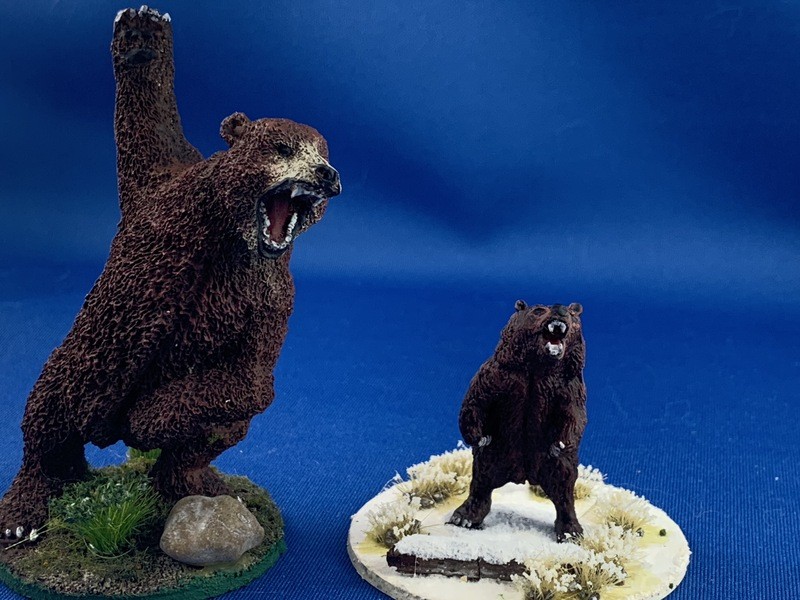 Serious chonk!  I like a bear with a big butt and I cannot lie.   That paw could take out an orc shield wall in one fell sweep, and then open up a pot of hunnee. 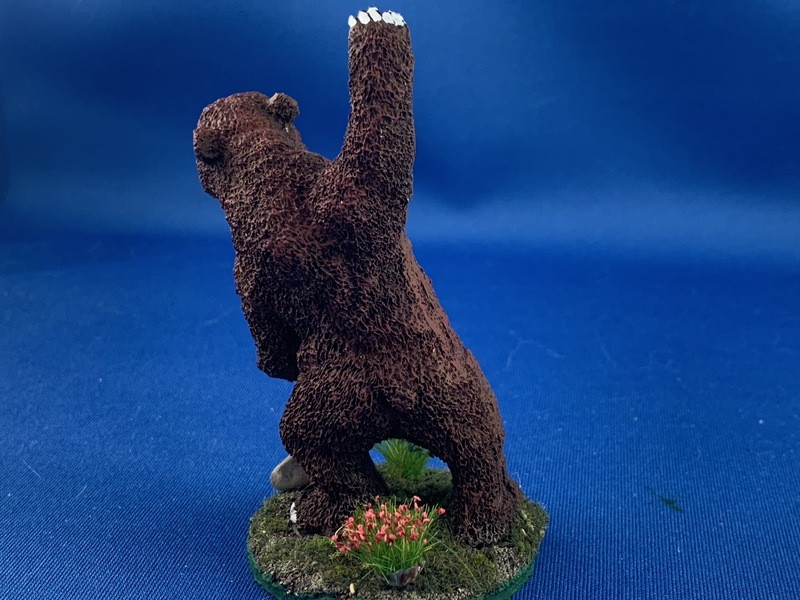 Finally, if you like big bears, I encourage you to check out Fat Bear Week, a bracket contest featuring actual brown bears in an American wilderness park in Alaska.