I am grateful to Cath Willey and to my Santa recipient, Chris Stoesen, for giving me extra time to  fulfil my Santa obligations after Kay got sick before Christmas and my spare time vanished.

Chris’ wish list included a camp scene from Baudea for his Romans.  Baudea make some lovely kit, quite detailed little resin models that were easy to pain.   These items finally on the way to Chris, I hope they will bring some rest and hot grub for his tired legionnaires.   15mm ancients aren’t really my thing, but if they were, I would invest in this kit. 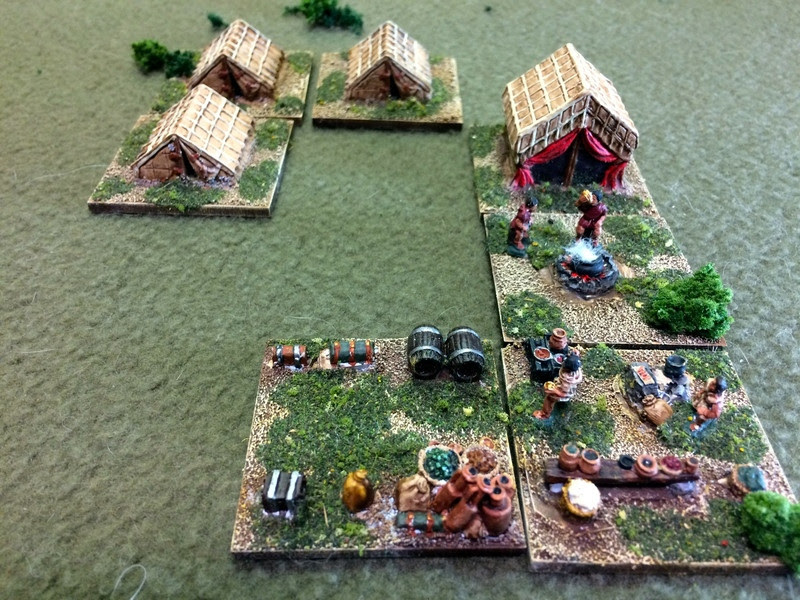 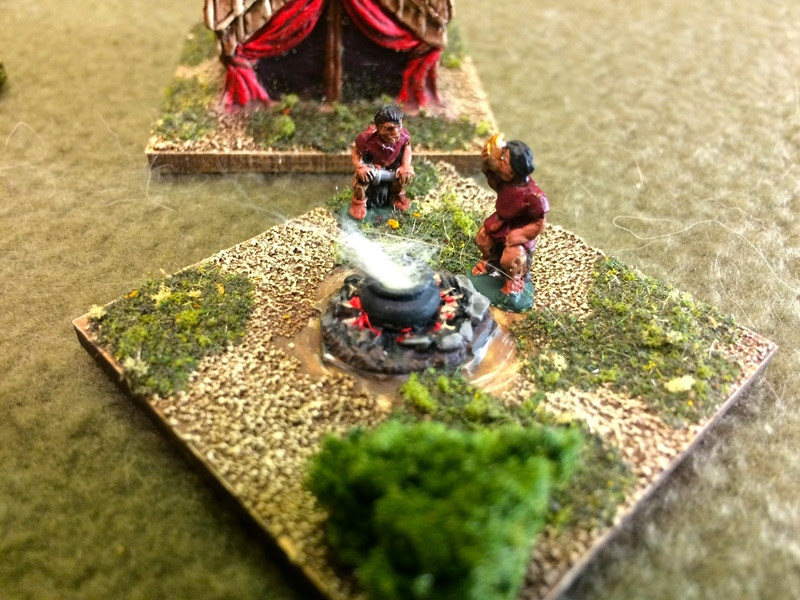 What Monster Have I Created?

My learning this week is that I shouldn’t have offered to give this game away.

If you are an old school board war gamer, you will remember that Avalon Hill did a card game based on its popular WW2 game of infantry combat, Squad Leader.   It was notorious for the ridiculously handsome, almost angelic SS guy on the cover.  I’m surprised that image has not been resurrected by the Alt-RIght.    The bits below, including AH’s Pacific War expansion, Banzai!, was gifted to me by an Army friend of mine.  I tried playing it a few times solitaire, and it didn’t really seem that much fun. 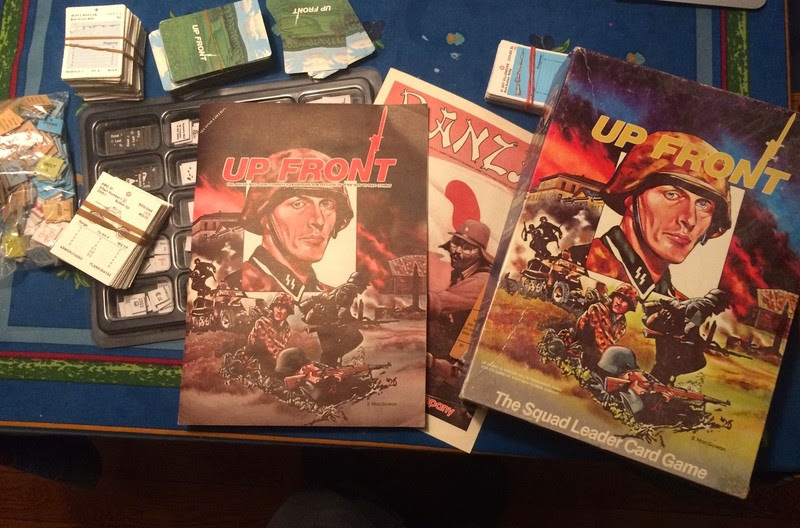 This week I offered the game up on a Facebook group called Wargamer Pay It Forward.  The deal is that members can place dibs on games they want, and if they win one, they have to offer a game in return.  It’s a great system.  I had won a copy of GMT’s Labyrinth, a game on the US War on Terror against international jihadism in the wake of the 9/11 attacks.   It seems like a good trade to me, as I like contemporary games and am a fan of the thoughtful work done by Ruhnke and his sometime collaborator,  Brian Train.

However, I wasn’t prepared for the 90+ claimants that have put in their dibs for Upfront!  I am fully expecting the number of entrants will top one hundred by the deadline of noon tomorrow.  Yikes.  I think I’ve found a robust random number generator that will do the job, but it will be a big job.  I suppose I could write the names on slips of papers and let Stanley the Cat draw one.  I’ve done it here before.

Just after Christmas I was with Madame Padre at Michael’s, a big box craft store in these parts.  It’s a place where determined looking housewives scout the latest Martha Stewart DIY projects, macrame sets, yarn, or hand painted signs with inspiring slogans such as “This Household Runs On Laughter” or “Dare To Follow Your Dreams”.   Sometimes these women are trailed by sad-eyed, bored men glued to their smart phones.    Not me.  I’m scanning the shelves looking for wargaming terrain ideas.

Case in point, these plastic flowers plants which I think might do nicely as forest terrain stands for the Elven Woodland Realm.  My idea is to cut up the big thing on the right to make a multitude of small shrubs, and glue them onto these round MDF bases along with the smaller shrubby looking things. 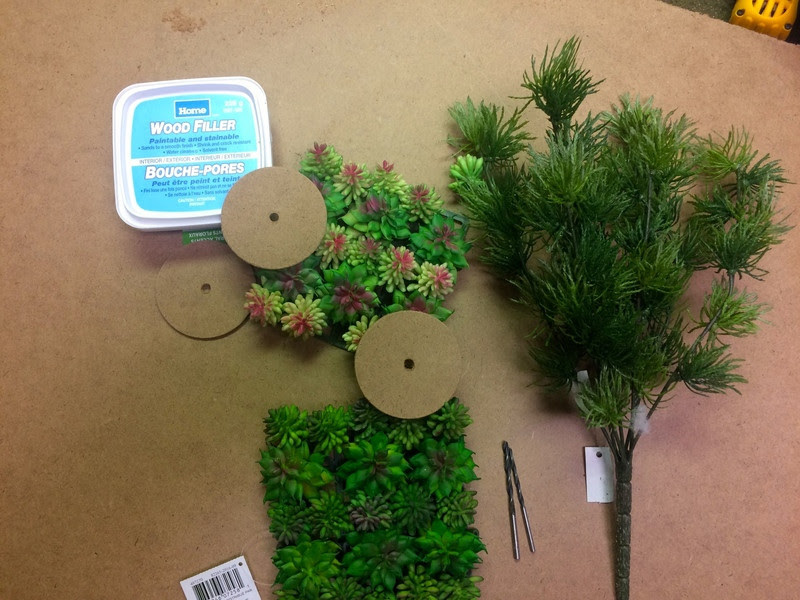 I think the plants on the left look reasonably strange and suitable for fantasy terrain, don’t you? 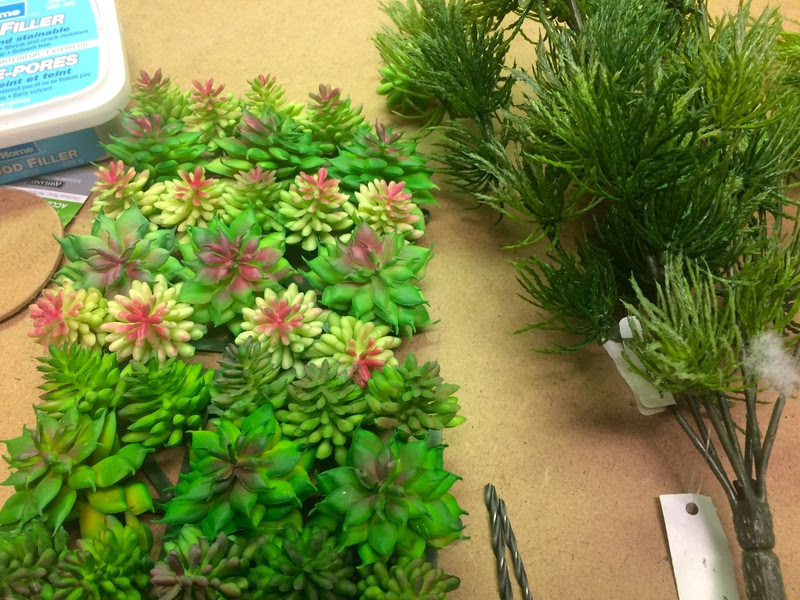 No clear plan yet, just thinking out lood.  More to follow.

Blessings to your terrain making!

Some Heroes of Spain

Not much to say about these chaps except that I painted them for MS Foy, proprietor of Prometheus in Aspic, in return for many kindnesses he has shown me.   These chaps are part of his 1809 Spanish army, and represent the Voluntarios de Campo Mayor, a light infantry regiment.  Tony has some learned background on them here and here.   A learned chap, Foy 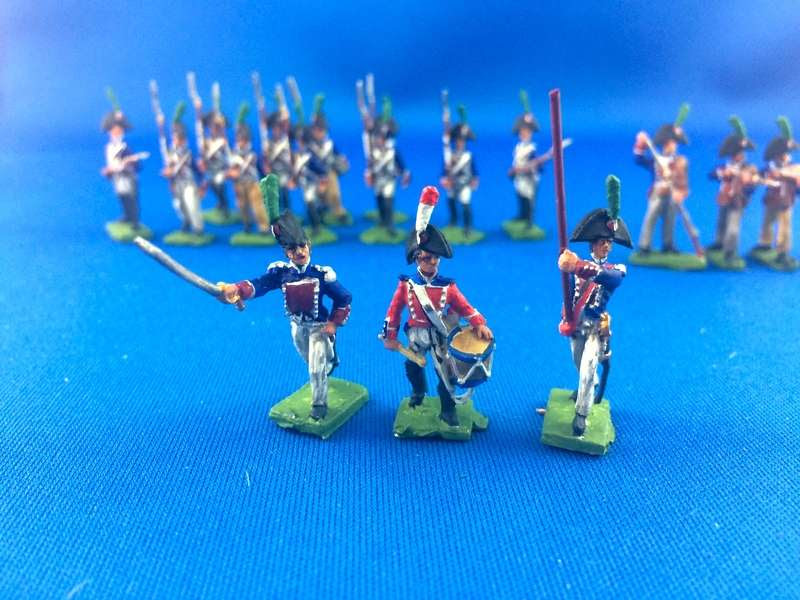 The figures are 20mm, by Spanish maker Falcata.  They are lovely sculpts, but according to Foy, Falcata has had a troubled business history and one would think twice about sending them one’s hard earned dosh. 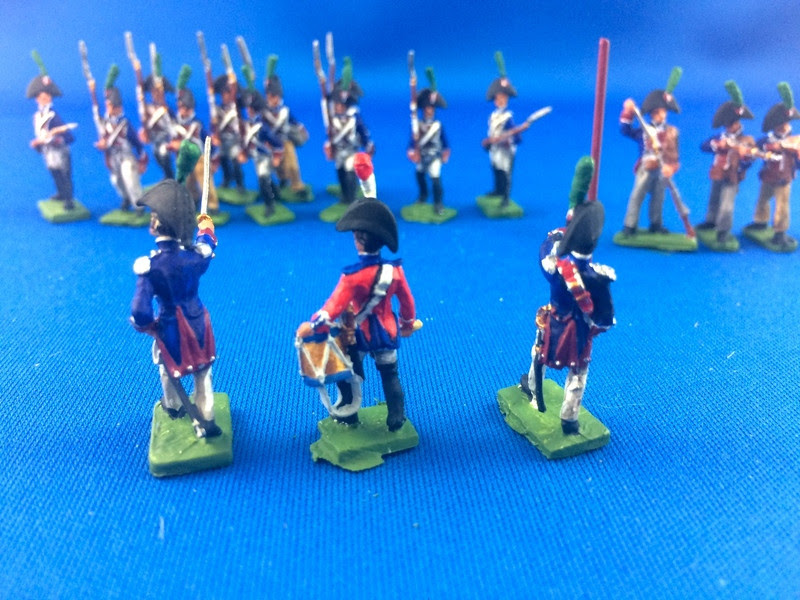 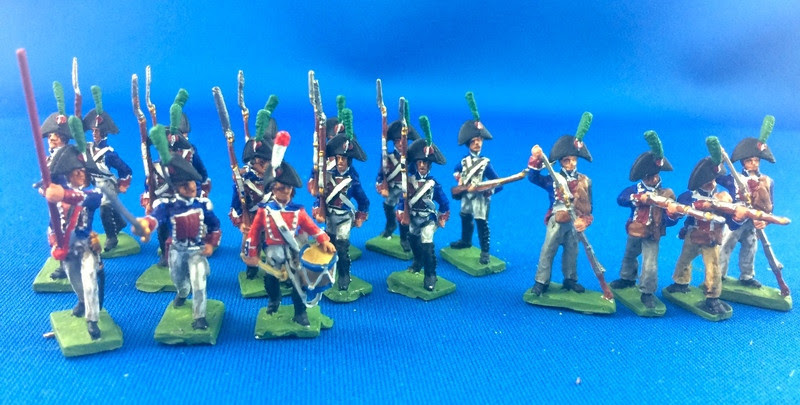 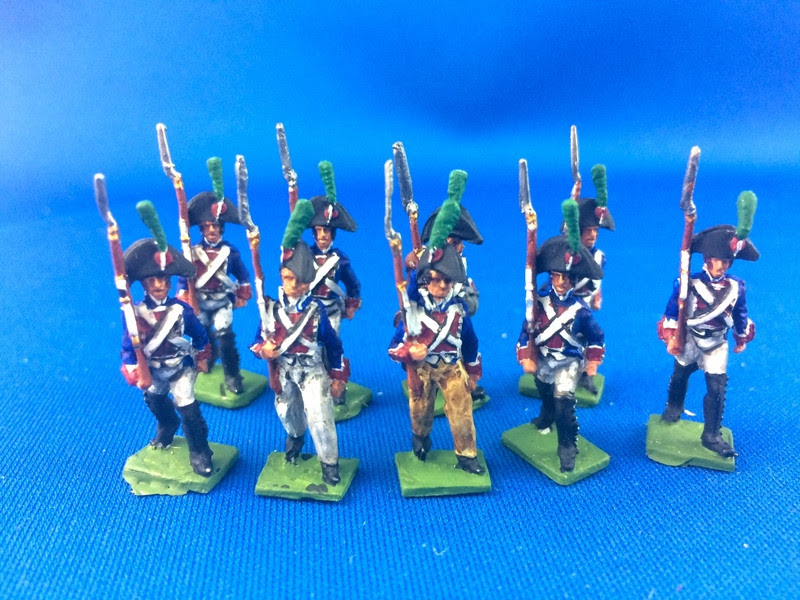 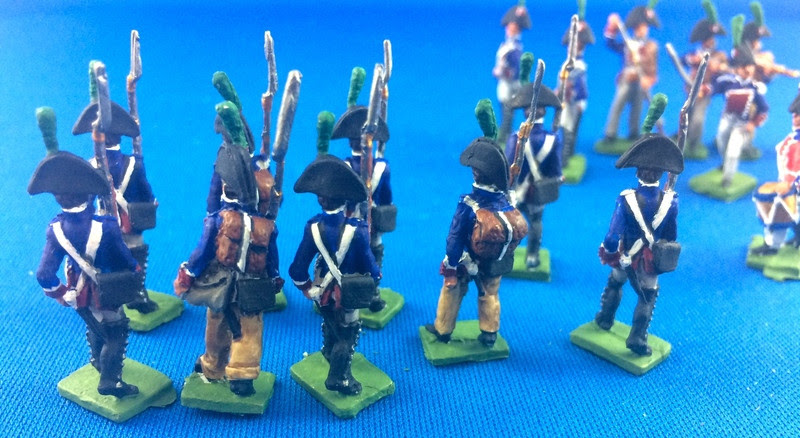 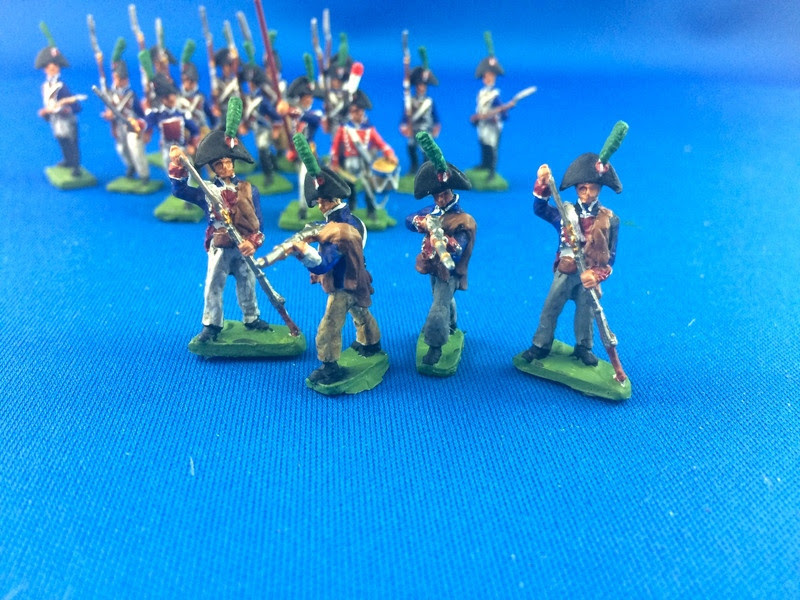 I had great fun painting them, but I think if I was to do Napoleonics in a larger scale than 6mm, I would go all the way up to 28mm.

I am happy to report that these fellows made it successfully over the waters and are now in Foy’s possession, where it does my heart good to think that they will certainly find the best of wargaming homes.

Some Women Of Valour

These 28mm igures arrived over Christmas and are now primed and on the painting table.  They are from Bad Squiddo Games, founded by Annie Norman (the Dice Bag Lady) to promote a more realistic kind of female figure and body type for war gamers.  These Dark Ages warriors seemed to me to be useful for my Lord of the Rings Project, where they will serve as Rohirrim.   No doubt a village will be attacked by raiders while the menfolk are away with their lord of the Riddermark, and so these shield wives and maidens will turn out to defend their homes and children

I am hoping to get them painted as an entry for the Analogue Hobbies Painting Challenge and maybe even attract the attention of the lovely Sarah for her choice of the best female figure of the contest.  A lofty goal, but I have my hopes.

These figures are generally well cast.  The two leaders, the lady with the banner and her companion blowing the horn, are exceptional.  The rest are good to fair. with the worst being the left most one in the bottom row.  I think they’ll paint up well.  They are on the average for 25 to 28mm figures, and should mix well with the primarily GW figures in my LOTR collection. 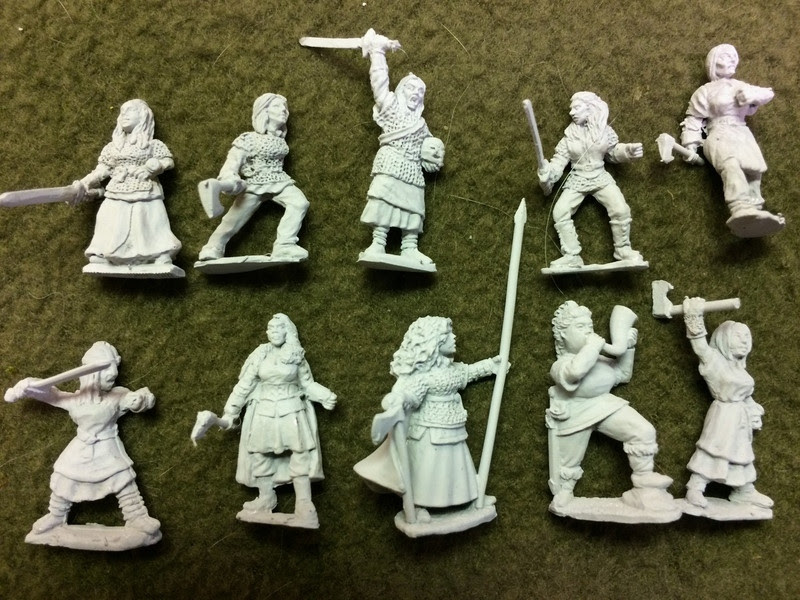 Here’s another Woman of Valour.  On Thursday Madame Padre went in for her second chemo treatment, and sported a very appropriate Tshirt from the Canadian Soldier On charity for wounded warriors.   She is indeed a warrior, who has never uttered a word of self-pity and is determined to maintain a positive attitude.   I am very proud of her. 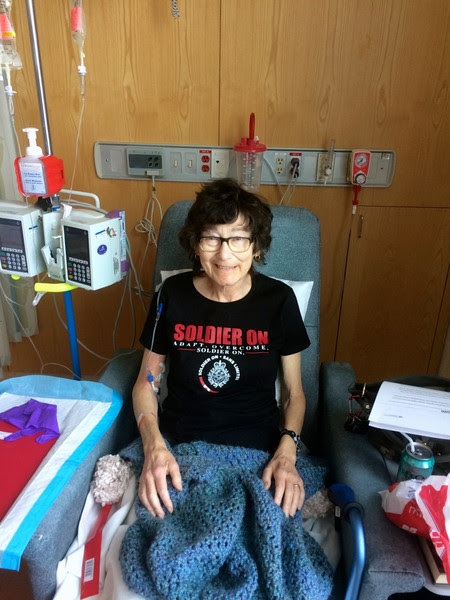 Blessings to you and those you love, be there for them.