My wargaming bestie James was over last weekend for the third instalment of what we call OP THUNDERING DICE.   Since we moved further apart last year, we have been running an ongoing series of slumber parties, and this time, ROTO 3, we decided to play another game of War of the Ring, try Sharp Practice 2 with my ACW collection, and then play a fantasy game of Dragon Rampant.

James got caught up in the Friday not rush north to cottage country and arrived late and somewhat frazzled, but some barbecued goodness and a beer downrange later, he was good to go.   We started with War of the Ring (2nd ed) by Ares Games.  You can read his account of our weekend here.  It was our second complete game.  The first time I played Mordor, this time I played the noble and winsome free peoples.  Both times Mordor lost when the Ringbearer achieved his quest.   It was a near run thing, and it turned on the draw of one chit.  Some would say that a game which invests so much in the military and political aspects of the war, and then hangs on a couple of dumb hobbits meandering through Mordor, isn’t really much of a game at all.   Well, I suppose, but you could argue that one could say the same thing about Tolkien’s book. We had fun, at any rate.

On to Saturday, when The Other Mike joined us.   James introduced us both to Sharp Practice, the second edition of Too Fat Lardies’ well known black powder skirmish game.  We threw an evenly matched force of Yanks and Rebs on the table.   Other Mike and I were new to these rules, though I’ve played SP1, but despite that faint advantage, Other Mile picked it up very quickly.

Here the gallant Major #5 leads his Union boys forward to try and flank the Rebel line. 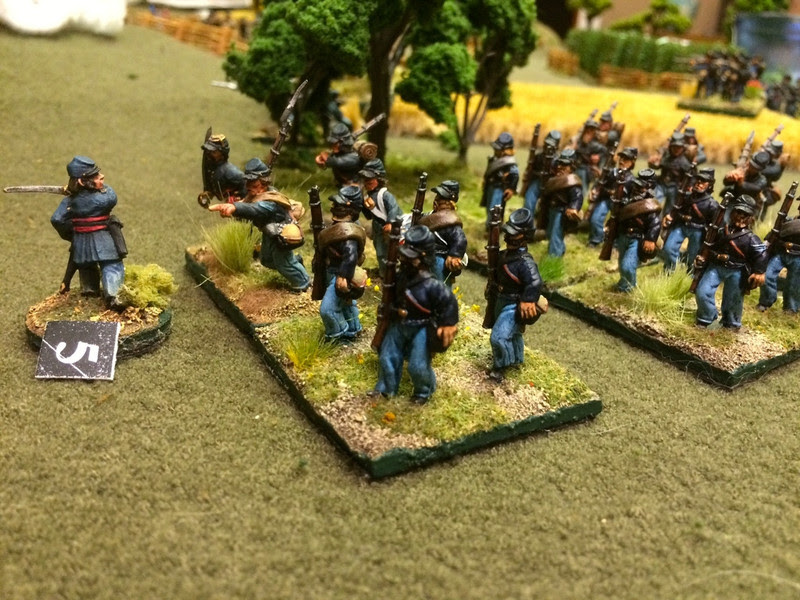 My company on the left wing gets into line and goes up against an equal number of Yanks.   However, the extra Union Big Man keeping their line steady, plus those annoying Yank skirmishers in the cornfield, would make it difficult for Rebs.  However, it’s the little hill on the right where the game will be decided. 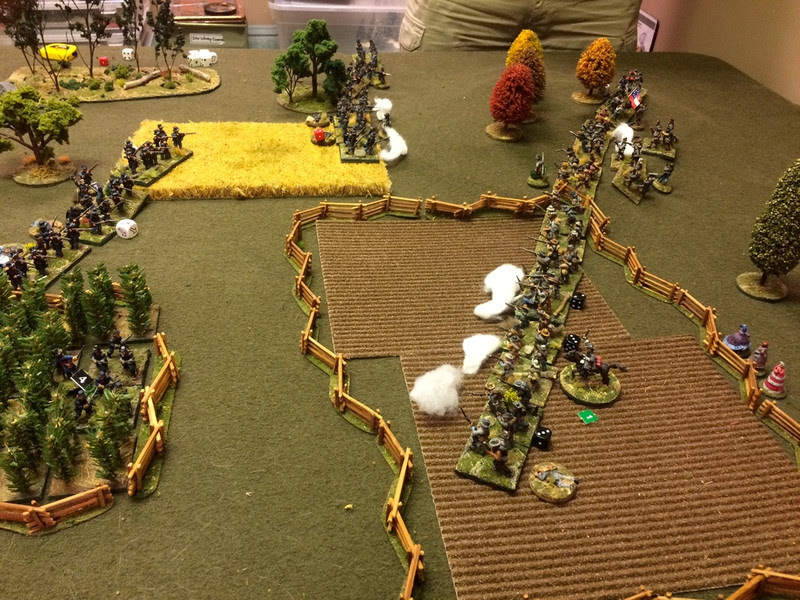 Shock builds relentlessly and my line breaks.  As shock exceeds the number of troops standing in each group, the formation breaks up.  One thing we didn’t realize was that each time a group retreats because of excessive shock, it lowers the overall Force Morale of they side, and that’s a bad thing.  We almost lost the game when this formation was defeated. 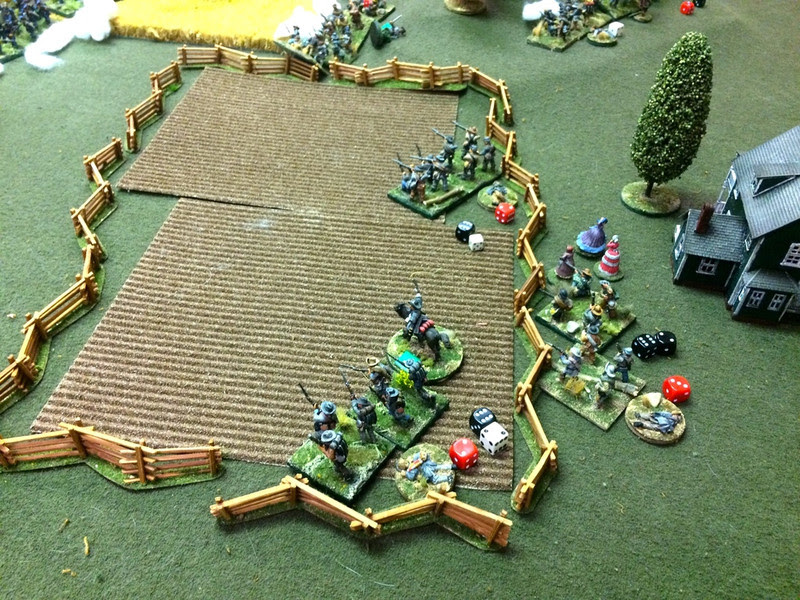 The game was, as I said, decided on the right.   Here in this incredibly amazing, exciting action shot, Other Mike’s troops charge down off the hill and shatter the Union left.    It helped enormously that we were able to get our skirmishers on to the right flank of the Union line. 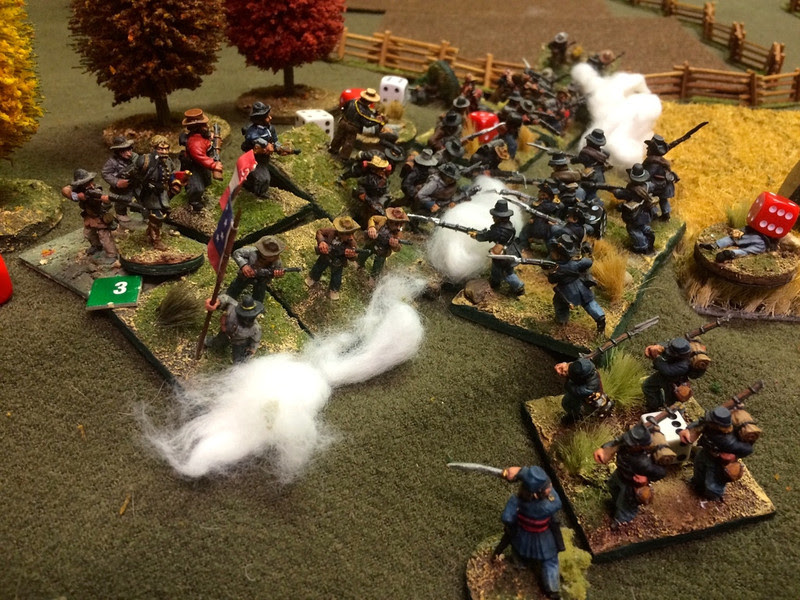 All of us liked SP2 enormously.   As Other Mike noted, it really felt like a subset of a regimental battle that you read about in the battle histories.   It had a gritty, small-unit feel that was very satisfying, and very different from another ACW game we like, Sam Mustafa’s Longsteet.

In the afternoon we reset the table, keeping the terrain and adding my Rohirrim village to play Dragon Rampant.  We gave the forces of Isengard the usual mix of Uruk Heavy Foot, crossbows (Heavy Missiles), archers (Light Missiles), Berserkers (Bellicose Foot), a shaman (Wizardling), and Warg Riders (Heavy Riders).  Against that daunting mix, we gave the Rohirrim a unit of skirmishing cavalry (Light Riders), one of heavy cavalry (Heavy Riders), two units of Heavy Foot, two units of Light Missiles, and two heroes, Gimli and Aragorn (both single model, 6 strength pick units).  We rated Gimli as Elite Foot, Aragorn as an Elite Rider.

It was a ripplingly fun game, where victory seemed within Other Mike’s evil orchish grasp.  Mike’s goal was to burn as many buildings as he could and capture the adorable and plump barnyard animal, Bakkonraed the Swine.   Here the surviving Rohan light archers (some old Wargames Foundry HYW English archers filling in) exult after they routed a unit of Heavy Foot.  In the middle, Gimli exults after massacring the Orc Bellicose Foot. 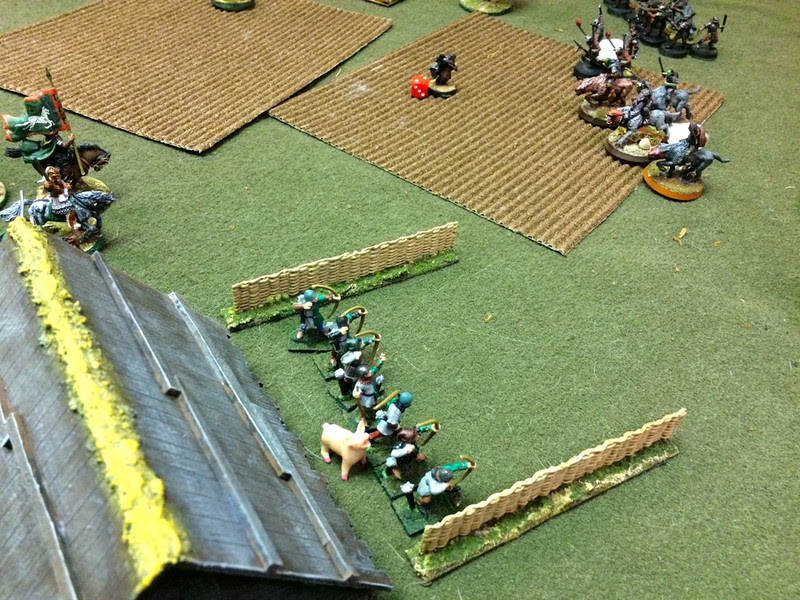 An overview of the battle, just before the Rohirrim Heavy Horse smashed into the warg riders and routed them, killing their general.   Other Mike threw in the orcish towel at this point and we spent a happy dinner hour with James and OM deciding to order their own copies of Dragon Rampant and scheming as to the armies they would field.  We all had terrific fun.

Note, BTW, in the last photo, my amazing spiffing Rohan watch tower.  I’ll get some photos of that in another post. 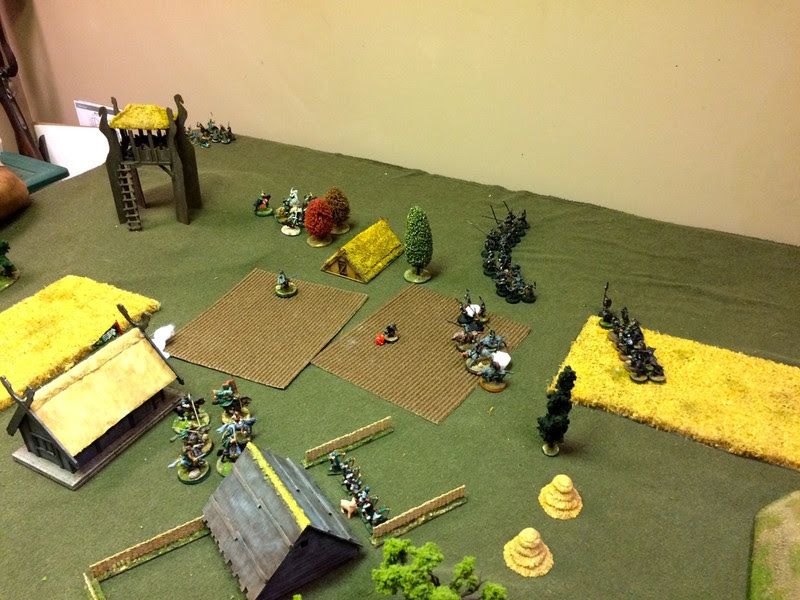 Our Diplomacy game ended tonight with the German player conceding to the Turkish player, citing the uncertain path of a German win and the desire not to prolong the game.   I thank the German player for this gracious decision, sorry as I am to see the game end.

Here are the final positions: 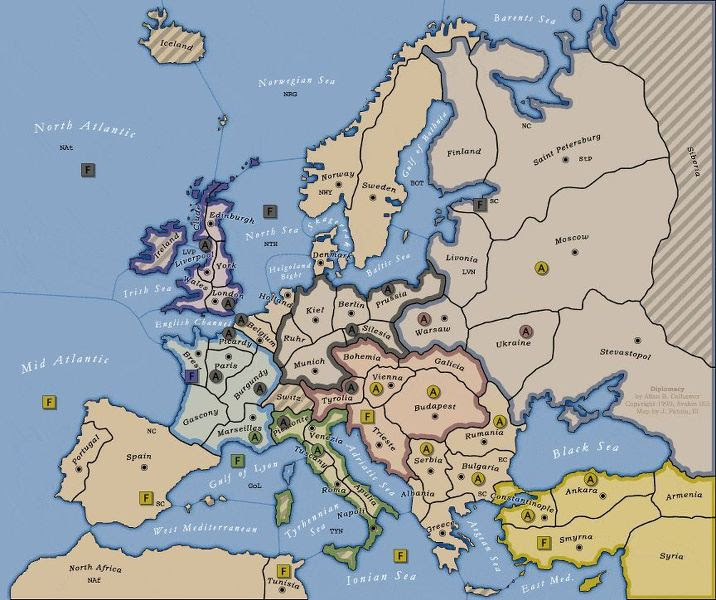 And here are the final standings:
1st place:  Turkey     15 SCs
2nd place: Germany   13 SCs
3rd place:  Italy    3 SCs
4th place:  Austria  2 SCs
5th place:  England    1 SC
The finishing players were:
Turkey:  The USA’s Jonathan Freitag  (https://palousewargamingjournal.blogspot.ca)
Germany:  The UK’s Edwin King (https://diplomatist2.blogspot.ca)
Italy:  Australia’s Ben Gilmour (http://rosbiffrog.blogspot.ca)
Austria:  Canada’s Patrick Gilliland (http://irregularwarbandfast.blogspot.ca)
England:  Australia’s Mark Haughey (http://onesidedminiaturewargamingdiscourse.blogspot.ca)
Jonathan and Ben were new players in my online Dip games.    Edwin, Pat and Mark all played in the online Dip game I ran in 2014.   Mark kindly stepped into this game to replace the England player who dropped out.
So congratulations all.   I certainly enjoyed reading the diplomacy as it went back and forth, and as always I had the best seat in the house to watch the intrigue and maneuvers.
I promised two painted miniatures, one to the top player and one to the best role player.
First choice is quite easy.  Jonathan managed a very convincing win, and I think could have dominated even against a German-Austrian alliance.
Second choice is more difficult, as Jonathan’s Ankara What was a very convincing propaganda organ of the new Ottoman Empire, and showed lots of work, but the prize for best roleplaying goes Ben Gilmour.  Italy had several propaganda broadsheets of its own, and Ben’s diplomatic messages were always full of Italian brio and showed a consistent sense of humour.
Gentlemen, I shall give some thought to your prizes.
Well done all and thank you for playing.    I may do this again in a year or two.
Best,
Michael
Posted by Mad Padre at 4:53 PM 8 comments: 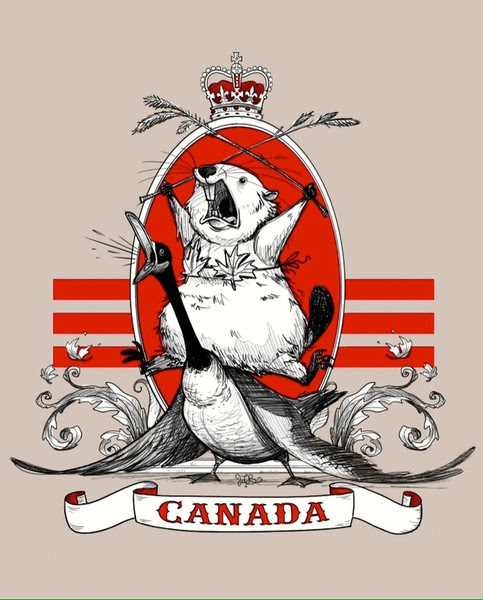 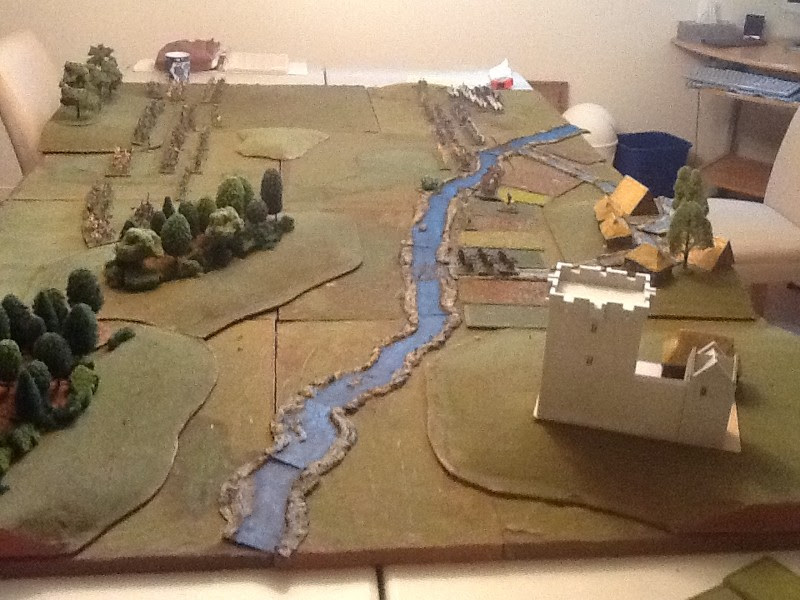 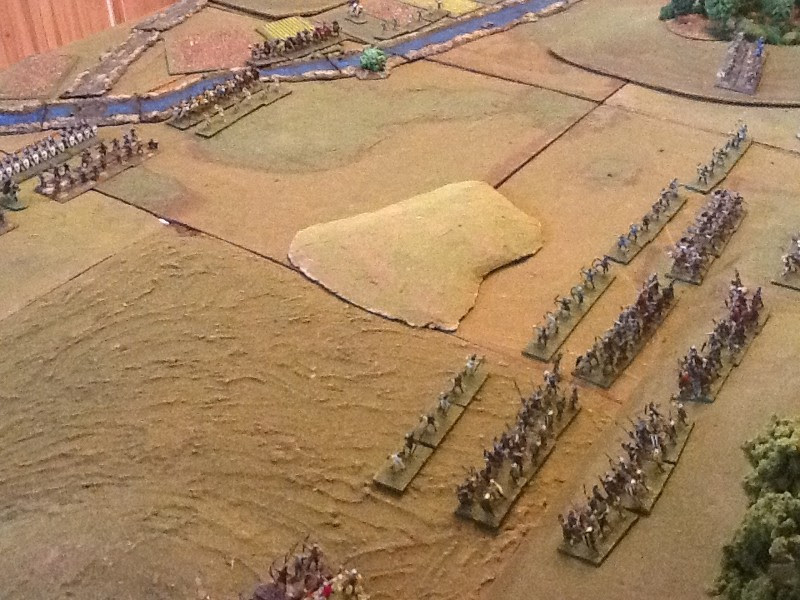 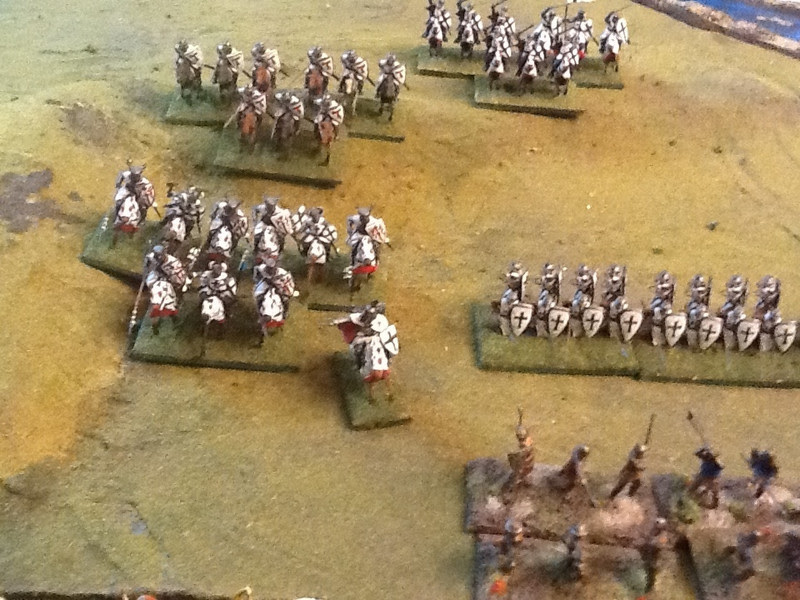 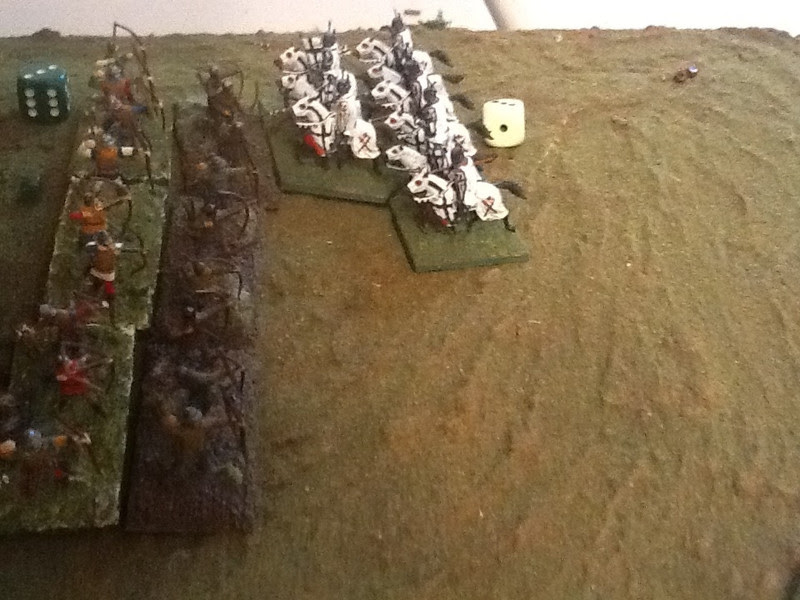 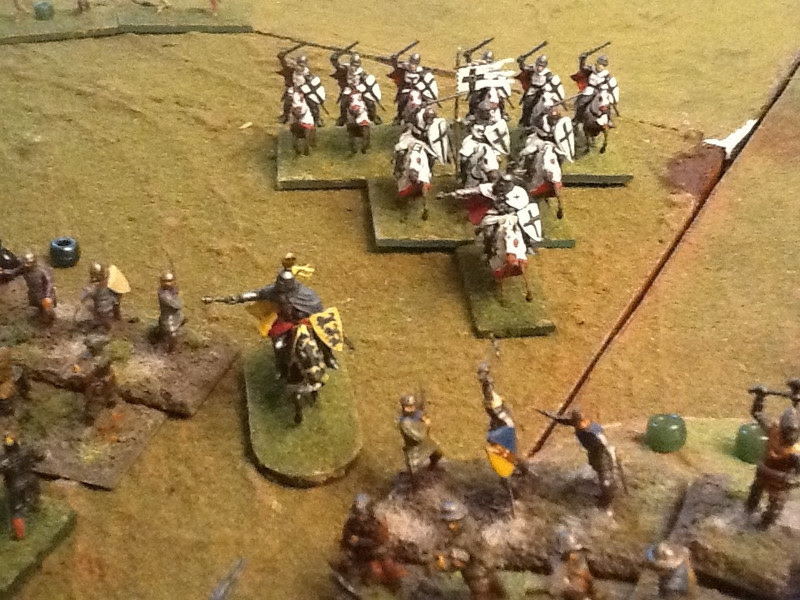 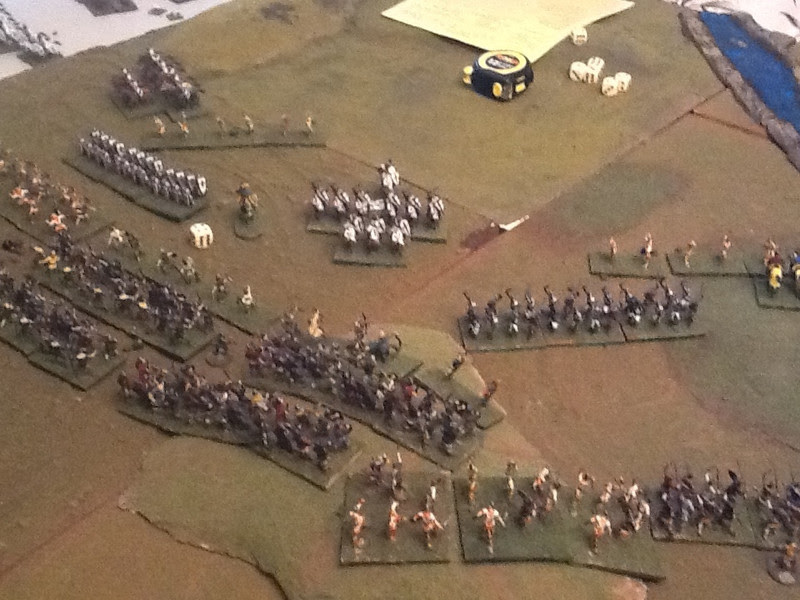 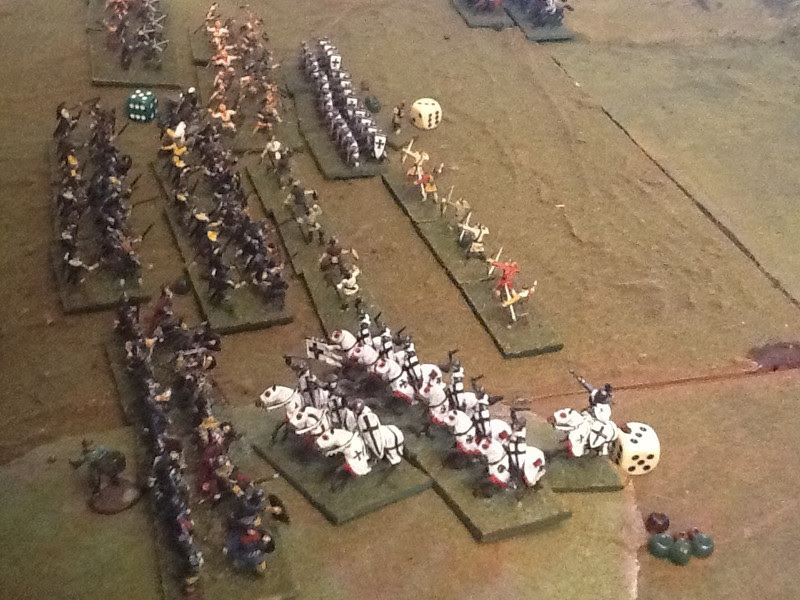