Space Orks Are Consuming My Time (work in progress)

There's been a long silence here, during which I've still been wargaming and painting, fitfully, and in a totally unexpected direction. My son John's Games Workshop Warhammer 40K space marines (do I need to do a little TM thingy here to make GW happy? Hope not) called to me, demanding opponents. Fopr his birthday last year I had ordered a W40K kit which included several sprues, about 25 figures, of orks. I ave always been a little curious about Warhamster 40K, and I wanted another means of relating to John besides vegging with him before his XBox (another TM needed?) so I decided to paint up the orks. Here's part of the mob that resulted: 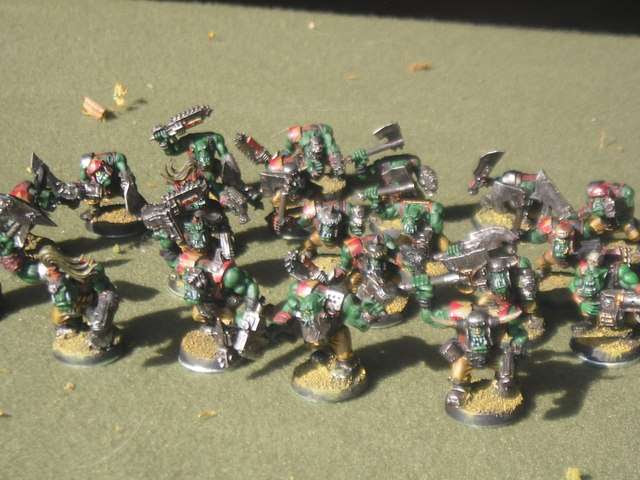 All of the following pictures are works in progress.

Here are some Nob, the overgrown, elite shock troops of the ork army. 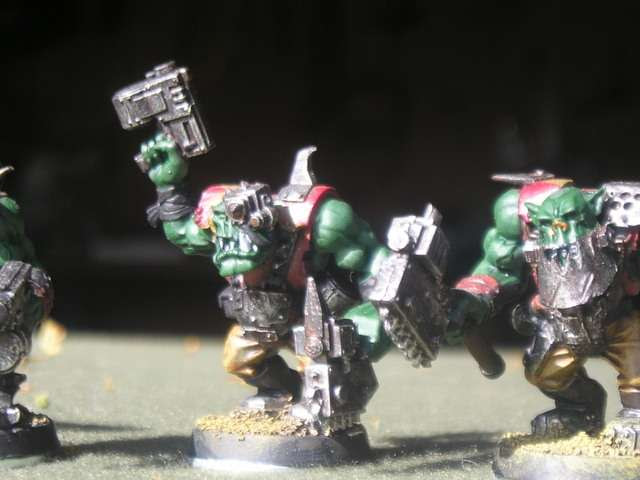 Two shots of my infantry ("Boyz" in ork parlance) showing my experiments with greenskin fleshtones. I am a sucker for the crazy heavy weapons these guys pack around. 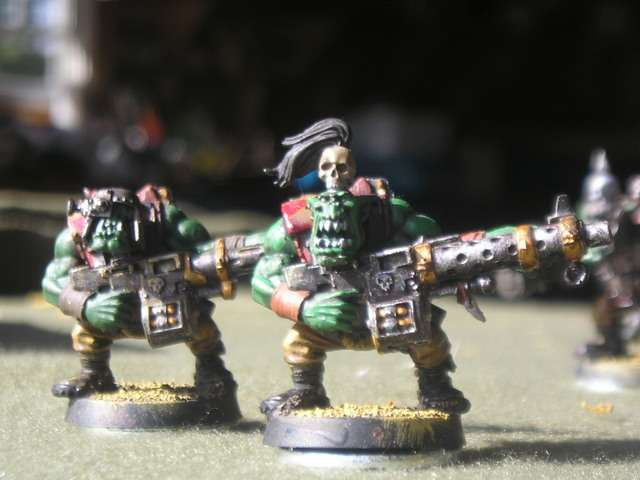 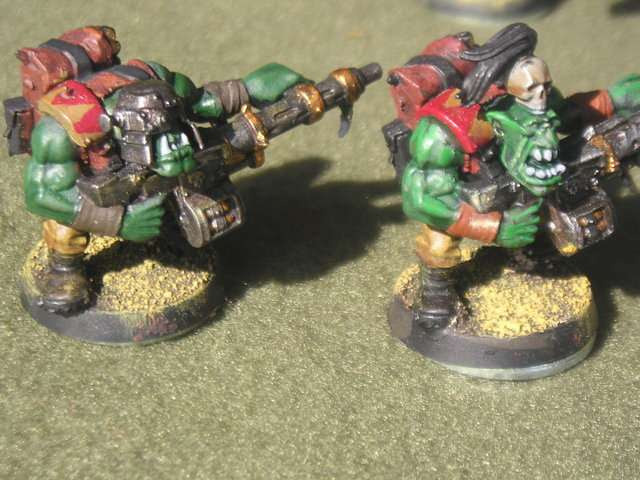 The kit also included three spiffy machines, jetbikrd (half motorbikes, half helicopters, called "deffkoptas", which were fun to paint up and which provide some fast attack/recon options for the ork army. I've learned that a fun tactic is to scream them in over the enemy using the "Turboboost" rule and drop large bombs ("Bigbomz") as they go by. 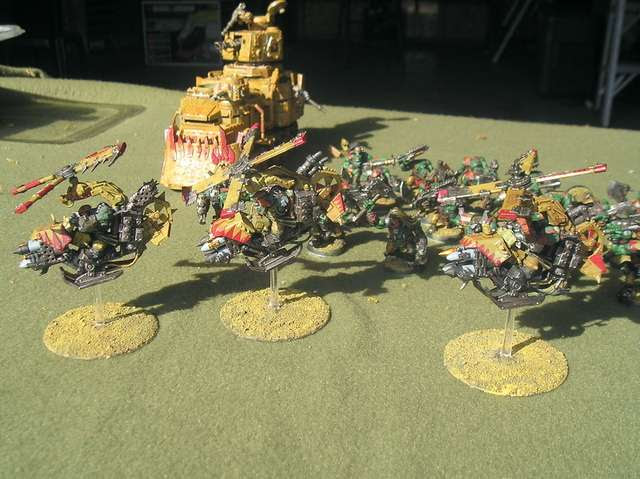 What's that big hulking thing in the background behind the deffkopta? It's a monstrosity known as a battlewagon, half tank, half armoured personnel carrier. I was very fortunate to pick up the kit for a song from a young soldier (an ex Patricia and Afghanistan vet) I ran into at the local gaming store. 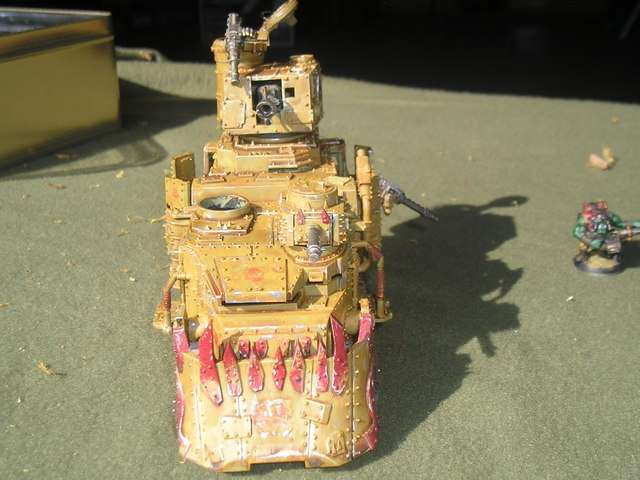 I have a lot of respect for Games Workshop model kits. The parts are cleanly sculped and moulded, and fit together easily. After making a lot of 20mm (1/72nd scale) kits, it's nice to work in a larger scale. The advantage of one of these beasts, as I'm slowly learning, is that the W40k battlefield is a deadly place, and since orks depend on shock infantry, a battlewagon with it's heavy front armour can protect a good infantry unit long enough for it to get into melee with the enemy. Here are some other shots of my beast: 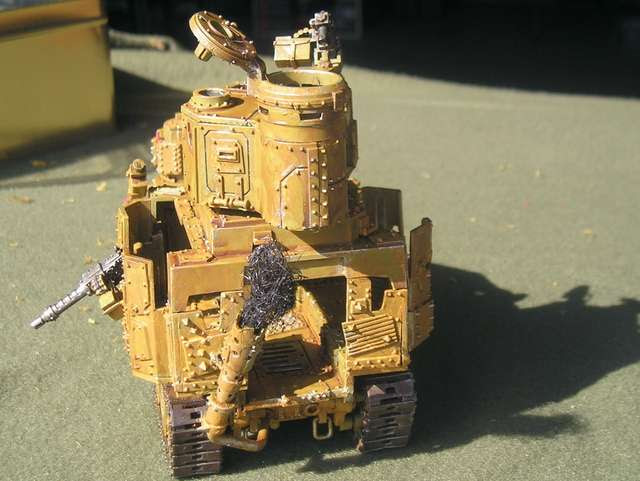 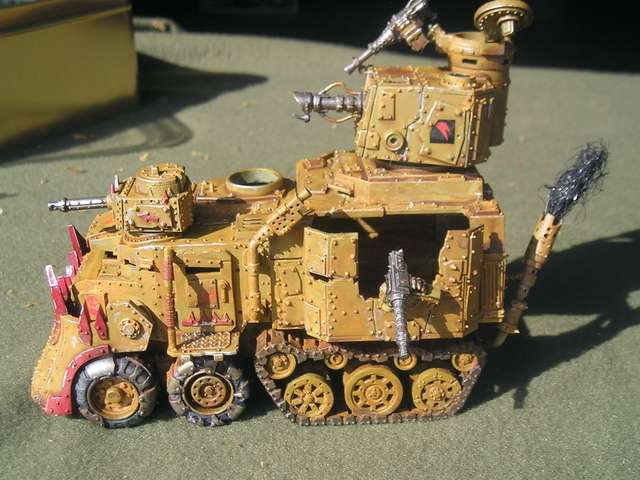 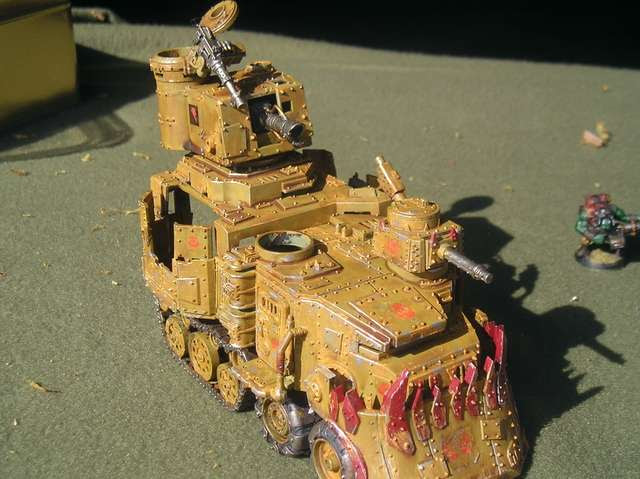 The paint job is Model Master German Panzer Dunkelgelb (sand yellow) which, along with the colour red, is the unifying theme of my ork army. It's then washed with a sepia brown and then weathered with a Tamiya weathering kit (rust) and with scratches and worn metal added with GW Mithril Silver. Your comments invited as this kind of weathering work is new for me.

Finally, here's the leader of the band, the warboss, riding on his battlewagon. I haven't officially named him, but I'm leading towards Crusher McGurk, though since I'm using German sand yellow for a theme colour, maybe it should be a German name. Comments?

On the workbench are, among my other projects: more space ork boys (with shootas to give me some firepower), some Gretchin (runty little orkish things - cannon fodder), and some W40K Imperial Guard which are proving fun to paint. More pictures soon.
Posted by Mad Padre at 2:03 PM No comments: