My son and I did some preliminary research and here`s an executive summary of our groundbreaking idea on edibile minis gaming.

1) Buy some gummy green army men at the local store (here in Canada we found them in the candy section of a store called Bulk Barn).

2) Fight a battle using whatever rules set you like - we used our house rules, Two Minute Wargames, because we were hungry.

1) no painting or basing required
2) easy storage (a plastic bag before, your tummy afterwards
3) green gummy army men are appropriate for most periods from 1940 on

Enjoy this brilliant idea, thanks to my son John and I! 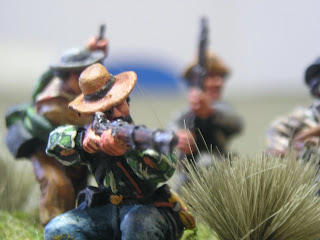 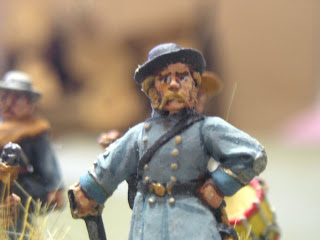 This gets my rebel infantry up to a respectable six regiments of four stands each - I have at least another regiment's worth close to the front of the queue (a second regiment of the Union Irish Brigade is ahead of them, however) - a lovely set of reb skirmishers from Renegade.
Posted by Mad Padre at 12:51 PM 1 comment: