Battle at the Crossroads - A Saturday Night Skirmish

A Saturday night pickup game this last weekend started comically as we waiting outside someone's condo, not knowing our supposed host was spending the day in Toronto. We finally got the game going in a church hall at 9pm. All the kit is from my collection, thrown quickly into boxes. The rules are Troops, Weapons and Tactics from my heroes Too Fat Lardies, and the scale is platoon level, 20mm/1/72nd. Setting is late war, NW Europe. A platoon of Briths infantry, with supporting armour (a Churchill, two Cromwells, and a Humber armoured car), are doing a reconaissance in force on a crossroads village. The village is held by two sections of veteran German infantry, with an 81mm mortar section (offboard), a PAK 40 75mm AT gun, and a Panther tank supporting. I was rather busy running the game as umpire, so the pictures I took are rather crappy. Remember to click on the pictures to see a larger image. 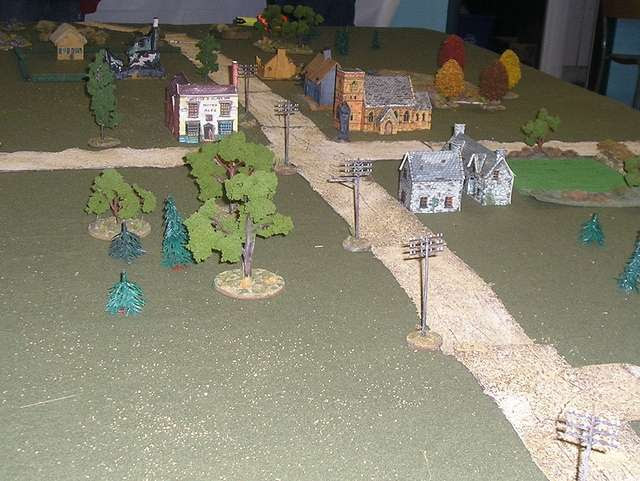 British enter on the bottom edge. The best thing about this table are the roads, used for the first time. They are sections of tea towel ironed flat, covered on one side with paintable acryllic mastic or caulking with sand/railroad ballast for texture, ironed again on the cloth side and painted. Still need flocking on the edges to show the grass at the side of the road, but they worked well. For more see Fonzie's Flexible Roads tutorial.

First English blind is spotted - a section and FOO follow closely behind a Churchill up the centre road. Germans preserving good fire discipline. Figures are a mix of Raventhorpe and Revell. 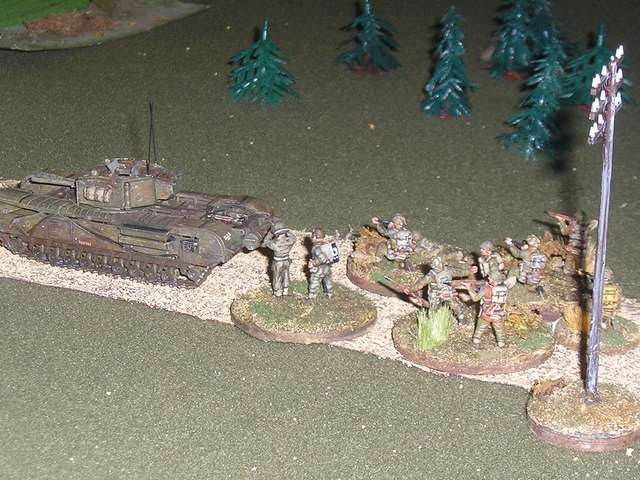 Another British blind is spotted. A Humber armoured car (plastic kit from Hasegawa) leads two Cromwell tanks (also plastic from Revell). The single figure is a British sniper (made by Raventhorpe) catching a ride on the back deck of the Humber. 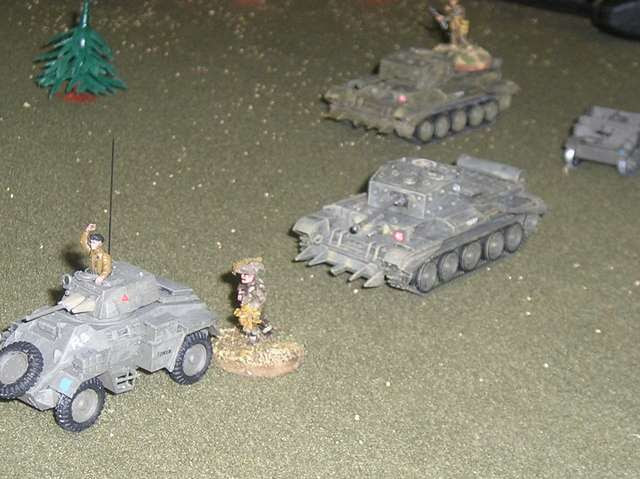 The British troops tried to spot German defenders in the houses and chruch at the crossroads but saw nothing. They sent a section forward across the roads, and finally drew fire from a German MG42 stationed in a building further back from the crossroads. Two Tommies fell and the others were pinned flat on the road. The British infantry were also punished by fire missions from the 81mm mortars, called in by the German FOO on several preplotted locations, and so the Tommies took cover and played a limited role in the fighting (rather realistic for late war British ifantry). 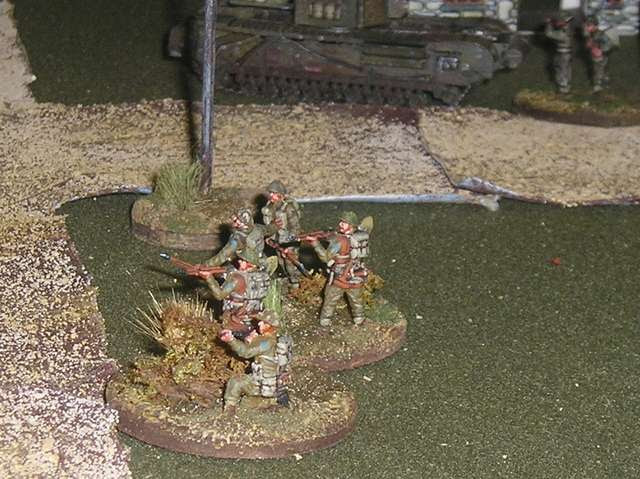 Otherwise the Germans continued their excellent fire discipline. The two Cromwells and the Humber continued to advance past the crossroads on the left, and finally drew fire from very well-conceled German PAK 40 anti-tank gun. During the duel that followed, the PAK got off four shots, with excellent hit chances (4 or better on 2d6) and all of them missed. Finally the Cromwells started hitting the area with high explosive and had luck knocking out the crew. Peter, commanding the Germans here, said at this point that if the British hadn't killed the AT crew, he would have shot them himself! German PAK and crew are not really visible here - the models are Airfix, from the venerable AT gun and Opel Blitz set. 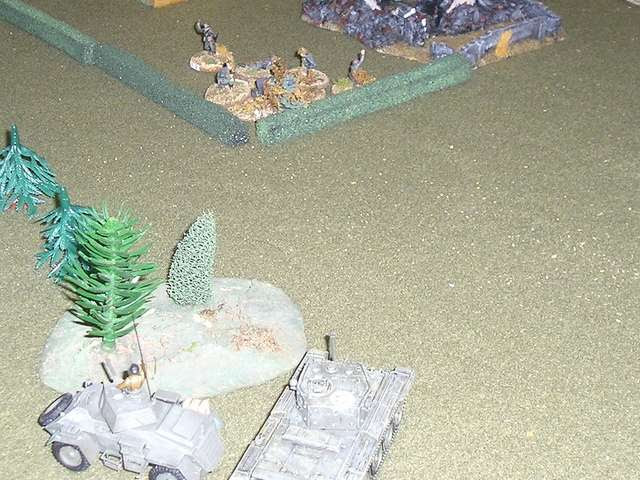 The Germans still had an unpleasant surprise or two to offer. Their only armoured asset, a Panther tank (Hasegawa), rolled forward from behind a copse on the German left and engaged the Churchill tank (Italieri) at crossroads. 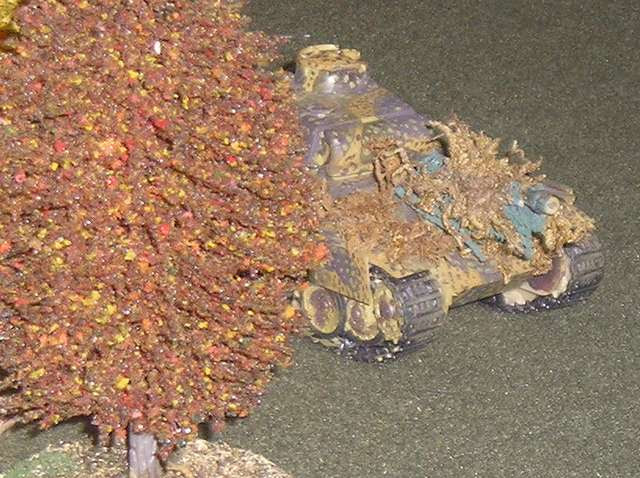 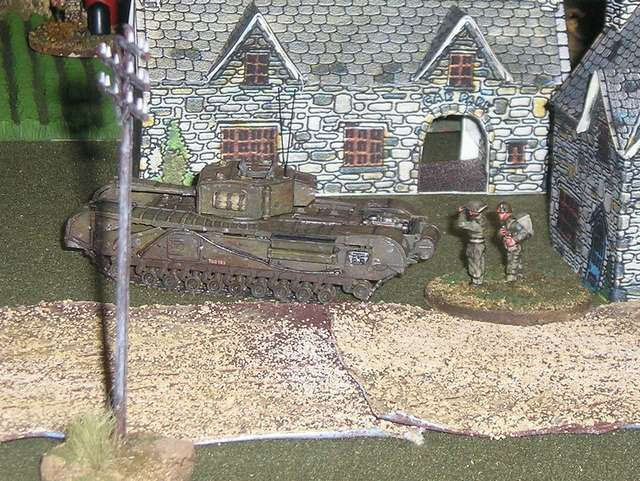 "Bloody 'eck, Alf, that's a Panther!" Sgt. Chalky White frantically traverses his turret, but CLANG! The first Panther round hits and even the Churchill's thick armour barely holds (Germans missed penetration by one dice). Chalky and his crew are shaken and retire one turn. Being game lads, they returned for a rematch but the dice were with the Panther and the next shot penetrated and disabled the British crew.

Finally the German main line of infantry defenders opened up. They had been stationed well back behind the crossroads, and threw a wall of lead at the only British section to have pushed forward. German infantry by Revell. 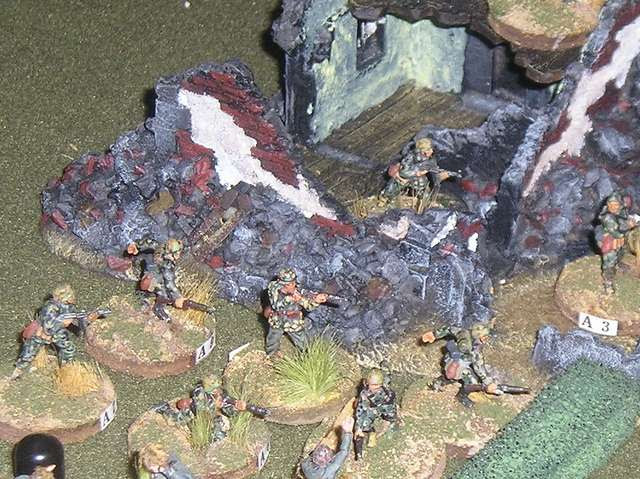 At this point people were yawning and it was late. The players agreed they liked the Too Fat Lardies approach to rules and enjoyed the uncertainty of blinds and spotting. The game was still in question - the German PAK and MG were both out of action, but that Panther was still free to take on the two Cromwells. We called it a draw.
Posted by Mad Padre at 5:36 AM No comments:

One of the fringe benefits of Easter being early this year was that it allowed me some time to go to Hot Lead, Southern Ontario's gem among miniature gaming conventions. James Manto and his crew have been offering a fine venue, great games and good vendors for many years. I spent last Saturday at Hot Lead and was not disappointed. 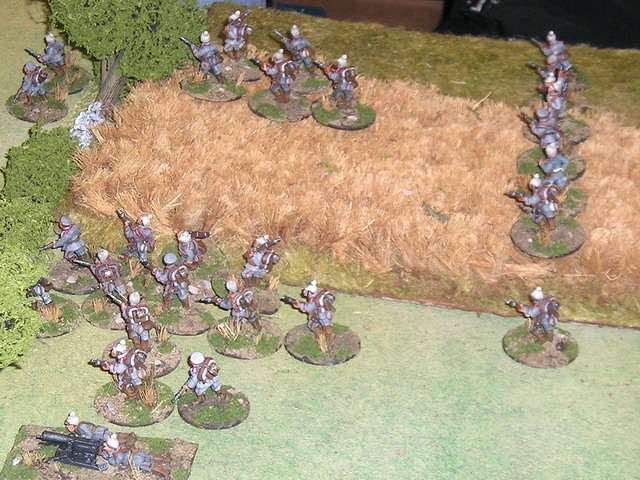 A complete writeup can be found via this link.
Posted by Mad Padre at 6:32 AM No comments: