I hope this finds you well and happily busy, as I’ve been lately.  Busy and productive enough to break out my light box to capture some finished work.

Today it’s mostly beastly orcs to swell the armies of Mordor.   Here is the command pack of some Vendel orcs.  My friend James and I went in on a joint purchase of some Vendel figures when they were still in business.   I love their chunkiness, the fact that they’re lead and not the spin-cast resin that GW now uses, and that they have their own identify, independent of figures based on the Jackson LOTR films, though I have more than enough of those minis as well. 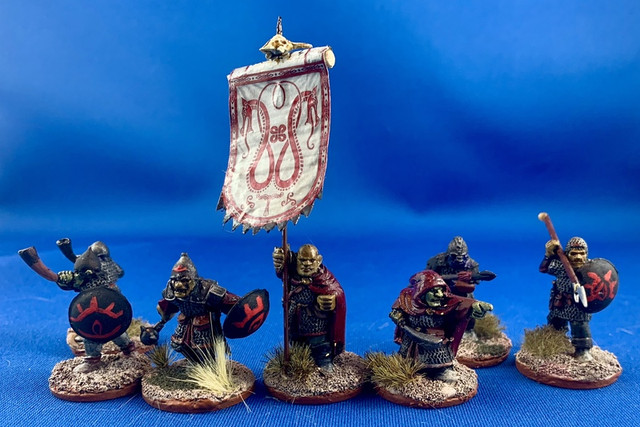 Command group.   The fellow on the left looks mean enough to be a senior NCO, probably what passes for an RSM in an orcish host.  Sadly all the weapons the Vendel figures had were spears, for the most part, so I gave him a pointy mace thing from the Oathmark Goblin box to go with his eye of Sauron shield device. The fellow in the centre looked like he needed a banner, so I gave him one from the Little Big Men Saxon/Viking set, cut and mounted on aluminum foil and embellished with a skull from the same Oathmark pack. 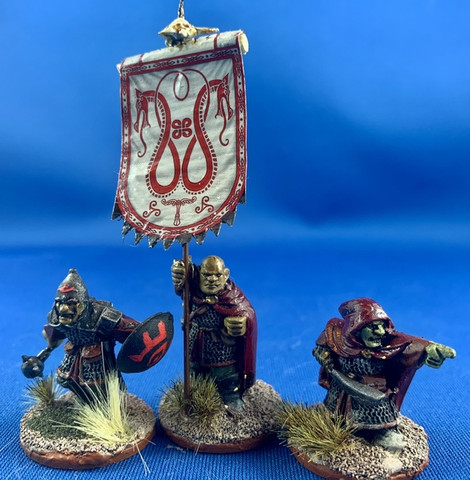 Another Vendel figure from the same set, with another Little Big Man flag.  I made a total hash of this flag, and had to work desperately to save it.   I figured the dragon looked suitably orcish, though perhaps too fine a design for crude orc hands. 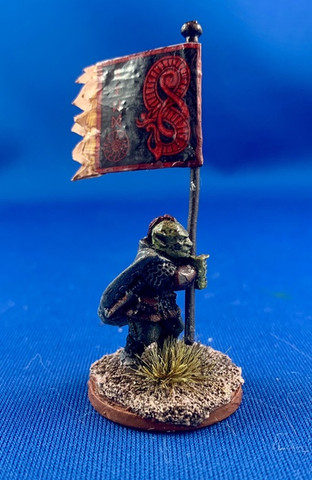 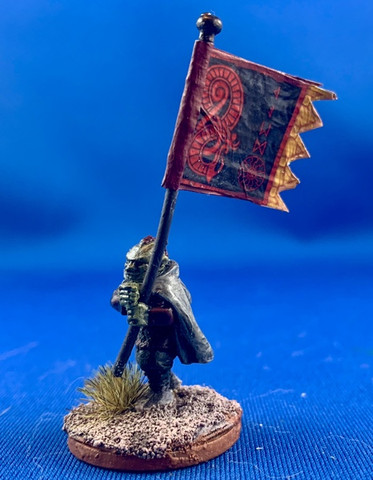 Seeing as I was doing orcs, I thought I would also do a test-paint of these figures from a box of Oathmark goblins purchased recently.  They look a little stunted and hunched over, compared to the confident upright Vendel poses, but they do look suitably menacing.  I’m reasonably pleased with them but I don’t like the shiny final look of the Army Painter Strong Tone washes that I bought recently. 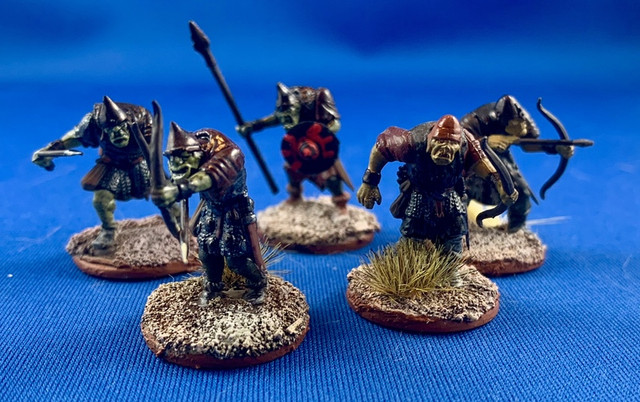 A quite nasty bunch to add some character to my orc hosts. 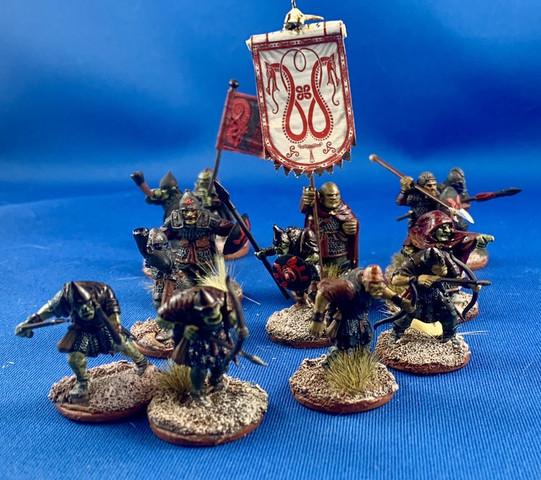 I have a raft of figures that I started and then abandoned when Kay entered the final stage of her illness some years ago, and I now have the energy to start finishing them.  Here is a Gripping Beast Alfred the Great lead figure, painted to be a Lord of Rohan.  The LBM shield transfer is quite appropriate for that purpose. 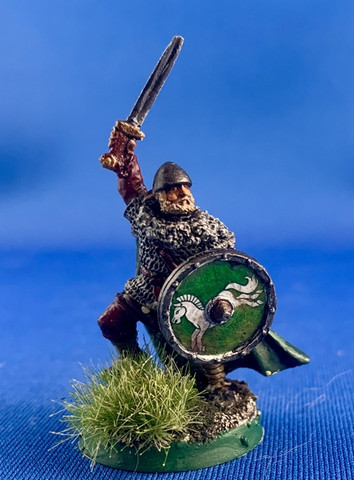 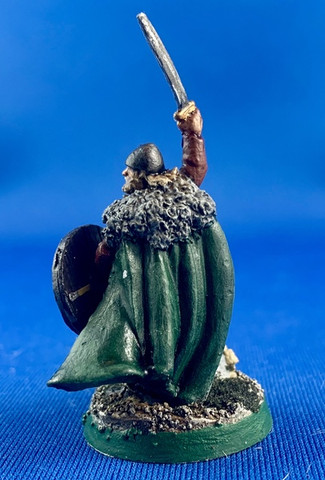 Finally, from the same raft of figures, four Sash and Sabre ACW casualty figures, to mark units in trouble or perhaps just for Matthew Brady to paint.  Thinking out loud here, I wonder if anyone makes a Civil War era photographer miniature? 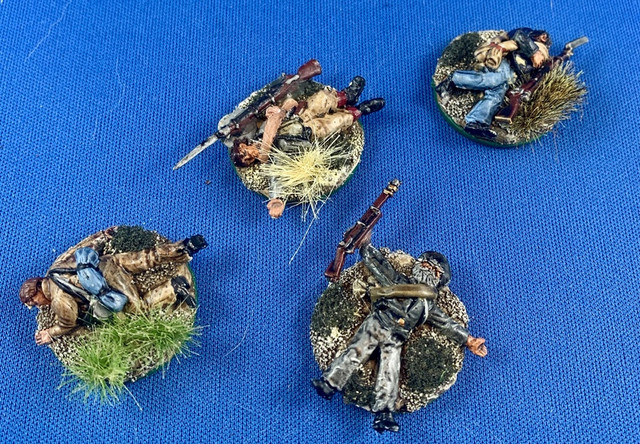 Thanks for looking.   Blessings to your brushes! 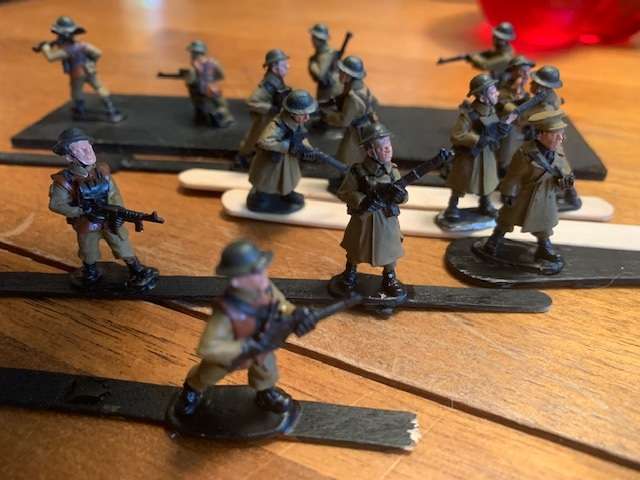 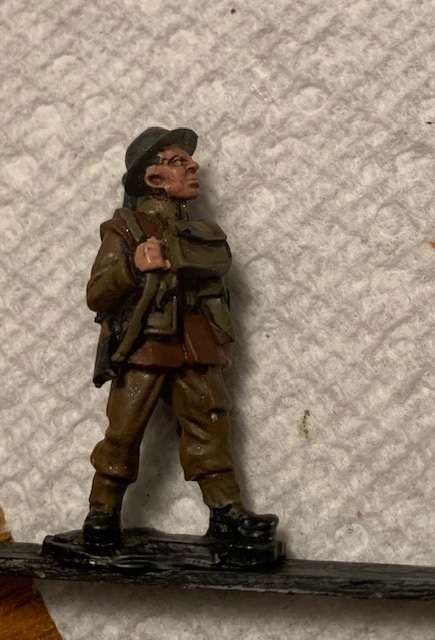