December hasn't been a kind month in terms of painting projects, but I did get this scenery project finished, a fairly simple to build plastic HO scale building kit from Modelmaster. As I understand it, Modelmaster purchased the molds of a West German company (possibly Faller?) and repackaged them for North America.

As you can see, the box said "hand weathered parts", but it still needed some painting. I decided to paint the window sills an offwhite, and painted the bricks where they have been sculpted in places where the plaster on the building is missing.

Finally I wanted to give the building the feeling of being in a ruined German city, so I used some 20mm propaganda posters I'd printed and hung onto years back from warflag.com. Wow, I just looked at that site, it's been a few years and there's a lot of cool stuff there. Definitely going back.

It's been a while for sure since I posted anything here. What can I say, I've been busy and I couldn't take my paints and brushes on a taxpayer's paid holiday to CFB Borden. I celebrated my return these last few weeks by getting some work done.

These are two Battlefront Panther G's in 15mm. The turret numbers are by Dom Skelton. I just hopped on Dom's website and noticed that he's expanding his line of German decals, though he hasn't yet started the SS divisions and the division I'm most interested in for my Normandy project is the Canadian's initial SS adversary, 12th SS.

Two 1/72nd scale Armorfast Cromwells - very easy kits to put together, made for wargamers. The decals are also from Dom Skelton and the divisional patches are from Guards Armoured. I am planning to use these tanks to represent the Welsh Guards as per the wargames scenario booklet published by Too Fat Lardies. I especially like Dom's tank name decals. The decals look ok even though they are meant for 15mm models and these are 20mm. The radio antennas are from a dollar store whisk broom. I tried making some camo nets for the Cromwells using bits of gauze bandage.

It's been a little quiet at the Mad Padre's workshop this last week, since the sunken road was finished and posted here. That project got some very nice reviews on www.guildwargamers.com, making me think I'm a better terrain modeller than I am mini painter. Reason for the delays - my wife and I decided to watch the entire ABC series Jericho for the first time and found we couldn't stop watching, it consumed our evenings, and also I'm back to my 6am runs (I get up at 5K) and my bedtimes are getting earlier. I'm determined I won't paint more at the cost of gaining weight and losing my fitness, so it's back to the search for the elusive balance.


Some time back I was tempted by a package of British manufacturer Valiant's hard styrene late war British/Commonwealth infantry. These are hulking great figures, closer to 25mm than the 1/72nd scale they're advertised to be. However they have lots of options (the sprues are very similar to Games Workshop products) and they are a treat to paint up. Here's what I got done this last few weeks - they're painted in the light blue patches of 3rd Canadian Infantry Division.

Tonight I need to get back to my Guild Britannia Russians project, as Sept 20th is creeping up on me and I need to get the little blighters done.
Posted by Mad Padre at 10:13 AM No comments:

During my American Civil War reenacting phase (I can't quite call it a career), one of the best events I attended was a march through the beautiful countryside of Loudon County, Virginia. I remember marching through deep sunken roads, with banks above head height, easily 3 to 5 metres, topped by stone walls, trees and vegetation. These were much deeper than the well known Sunken Road at Antietam. I always wanted one for my ACW tabletop, and so it became a project for this summer.

I started with MDF board but to shape, some pink styrofoam insulation, and white carpenter's glue. One the foam was cut into shape, I sculpted it using a hacksaw and sandpaper.

Once the sanding was complete, I filled in the rough bits and holes using plastic wood putty, slightly watered down. Yes, for you Canucks, that is a cup of Tim Hortons in the top of the picture.

Next I painted the whole thing with leftover brown housepaint liberally mixed with play sand. The paint and sand, combined with the wood putty, left the whole thing as tough as rhino hide, which is good for toughness and durability. I then drybrused the whole piece using yellow ochre and some lighter shades.

Next I added Woodland Scenics products for the vegetation:

Here's the finished piece with some of my 28mm ACW collection to give a sense of scale:

While some of the contours are a bit clunky, they are also flat enough to place troops, guns, or additional terrain features such as tree stands. For the time cost I think I have a nice terrain piece to add interest to some ACW battles, and which can also be used in European gaming such as 20mm WW2.
Posted by Mad Padre at 4:50 AM 1 comment:

On the Workbench for September

Hopefully a few more projects will be done by Labour Day and the end of my leave period. They include:

My Britannia Miniatures project for the Guild. I've started painting some of the Russian WW2 infantry mentioned in my last post here. They are nice figures, though on the wee side compared to the other 20mm figures currently on my workbench.

Also in the same project is this Britannia Miniatures resin Red Army GAZ Radio/HQ truck, which will go with the Red Army command group shown here previously. I like the level of detailing, such as the stowage on the roof, and it's a lot easier to assemble a resin model than a pastic one.

Two 20mm / 1/72nd scale Armourfast WW2 British Cromwell tanks, which while plastic were also easy to assemble, given that the tracks and wheel bogeys are all cast in one piece.

Using the same colour palette for the Cromwells, I'm working on this 28mm Games Workshop Lehman Russ tank to go with my small collection of Imperial Guard figures. It will give that Ork Battlewagon pause for thought - assuming that Orks pause to think about these things. The white gauze bandage around the main gun is intended to be camo netting that will be painted. I am also planning to add some track sections to the turret and hull as extra armour, as Allied tankers did in WW2. 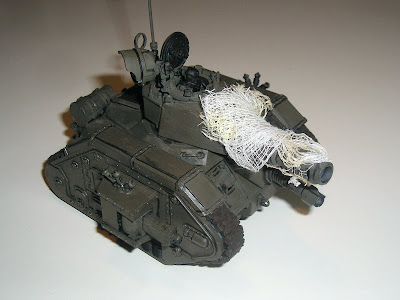 Finally, some more chaps from the same IG command team.

Finally satisfied with my work on this beast and have pronounced it finished. Actually it's been in several W40K scraps already. In one fight it was summarily demolished by some flying Chaos demon beastie who opened it up like a sardine can. In a few other fights it's done reasonably well and gives my boyz a fighting chance of making it into da scrap when all the big blast template weapons are flying.

The front - I'm happy with the weathering and chipping. I used Modelmaster German Dunkelgelb as the main coat, with red detailing to reflect the rest of my Ork army, both washed with GW Gryphon Sepia. The rust is from a Tamiya weathering kit. Very powdery but fun to use.

The two side gunners:

The rear and the interior fighting and passenger compartment.

My Imperial Guard squaddiers are anxiously demanding to know when their AT support will be ready to deploy.
Posted by Mad Padre at 8:09 AM No comments:

Next on the Painting Bench - The Russians are Coming!

I've always been interested in Britannia's line of 20mm WW2 figures, and my existing Red Army kit are plastic and pretty dodgy, so with the current Guild Wargamers painting competition focusing on Britannia figures, I thought I could get an entry done by the late September deadline. So a package from the UK arrived and a mob of little lead streltsy stormed out, rudely displacing the other chaps in the queue.

Officer reading inspirational passages from the speeches of Stalin:

Infantry - I like the summer uniform with the cloth sidecaps which the Russians evidently preferred to the steel helmet; evidently they felt that head protection was weak and unmanly:

Finally, this HQ group has some lovely poses and characters, including a sinister looking fellow in a leather trenchcoat reminiscent of Alec Guiness in Dr. Zhivago. They'll make an excellent Fall of Berlin vignette for the entry I'm contemplating:

These are lovely scuplts and the facial expressions have a lot of character. Only quibble I have is that they are on the small side of 20mm, compared to some of the minis I have, such as the Valiant late war British Tommies currently on my painting bench.
Posted by Mad Padre at 5:08 AM No comments:

Here's a shot of my first squad of Games Workshop Imperial Guard figures. I'm pleased with the result, except for the GW decals on the shoulder pieces of the flak jackets, which did not take well to the final finish of Testors Dullcote that I used. Perhaps in future I'll just avoid the decals.

The final camp pattern, based on the British Denison parachute jump smock of WW2, turned out reasonably well. The shininess of the Vallejo paints that I was worried about didn't persist - one good result for the dullcote.

Here's the Guard sergeant with his chainsword.

There's a command squad nearing completion on the painting desk, and a second combat squad in early days. Oh, and there may be a half complete Lehman Russ tank trundling around the basement.
Posted by Mad Padre at 2:52 AM 1 comment: