B17 and all the Trimmings

In another totally gratuitous, non-wargaming use of my time, I made some model kits to amuse myself.    This 1/72 scale B17-F sits behind my desk at work, and was made in my office during my lunch hours over the past few months.     The model is by Academy, a Korean-based company, and the service vehicles are from an Airfix USAAF bomber resupply kit.  I purchased both kits from a store in Toronto, Wheels and Wings, on Danforth Ave.   It’s a great store for plastic model fans.   I painted the B-17 in the iconic aluminum and red paint scheme rather than the more ubiquitous olive-green, though both are good looks.  There is something quite American about the silver bomber, a curious mix of arrogance and naivety.

Like I said, no wargaming value that I can see in these models, but I greatly enjoyed putting them together and they make a nice display grouping.  Also a bit of a tribute to those brave men who got into these planes day after day to go bomb the Reich.

Cheers and thanks for looking.  Blessings to your models.

Here is the last of three descriptions of a very leisurely conducted game of Reisswitz Press' ACW rules, Pickett's Charge, in which I think I've learned how to do charges more or less correctly, think I've understood the brigade morale rules, and think I'd like to keep trying these rules.

On the rebel right, the time seems opportune for an attempt to try and gain the hill which is the key to victory.  Unfortunately, the lead Confederate unit is more than 3" ahead of its friends to the rear, so it doesn't get the rear support bonus in the charge resolution dice, but the Mississippi boys gamely rush the hill. 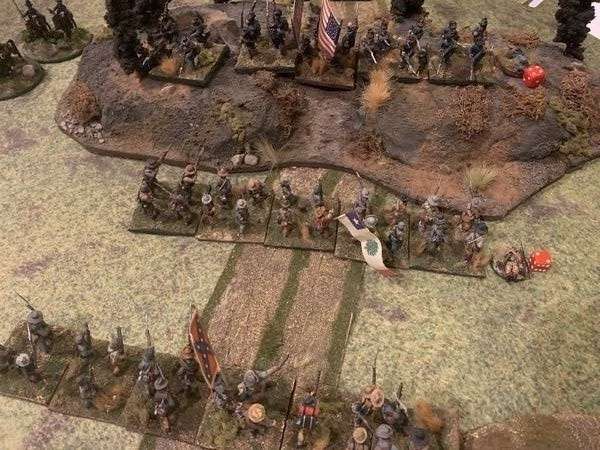 However, in these rules, defenders usually get to fire a volley before the chargers close, which the Yanks on the hill do, decisively.  The attackers take three casualties, and the result is enough to force an Elephant (morale) test, which is not guaranteed but which usually happens at the deadly (hi rolls) end of the fire combat table.  The attackers are no up to five casualties.  Normal size units (five bases) disintegrate when they reach 12 casualties. 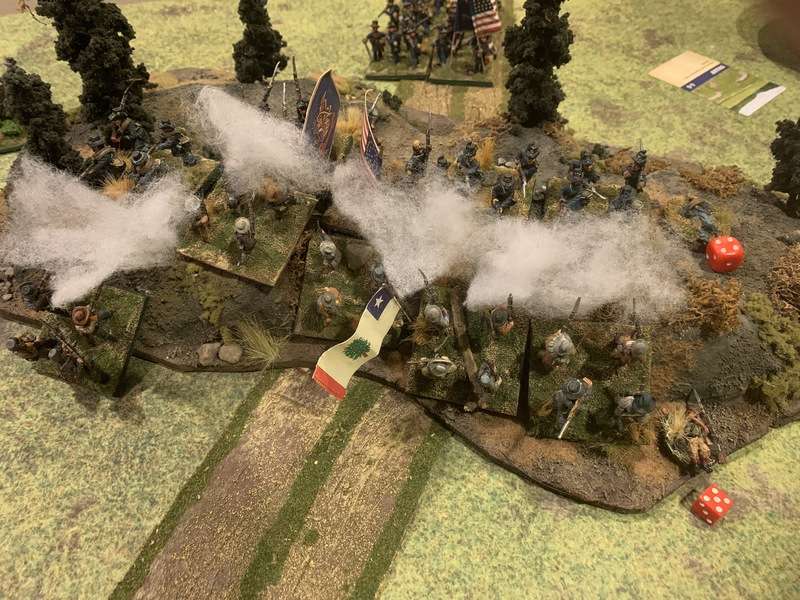 As a result, the Mississippians roll poorly and are Whipped (not quite as bad as Routed but nearly as bad) and fall back a long ways, unforming (basically disordering) the rebel unit behind them as they skedaddle through it. 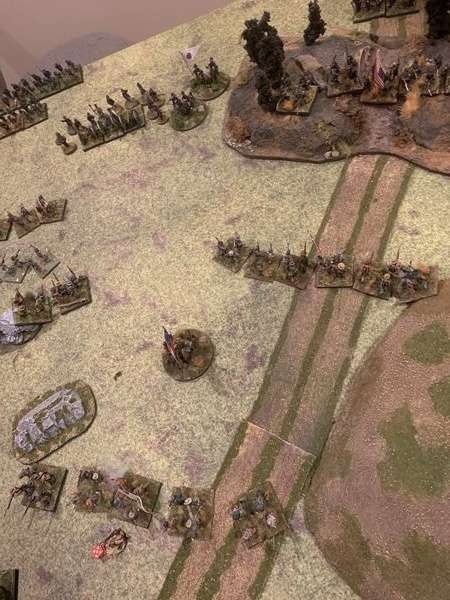 Things get worse for the rebs.  On the Union right, the reserve regiment stood steady while the Whipped yanks passed through and sheltered behind them, giving the battered regiment a change to resume.  There partners in front have exchanged volleys with the rebel regiment which had previously charged and won the centre.   The rebels lose the firefight, taking four casualties and failing their "Elephant Test" from the incoming fire enough to go unformed. 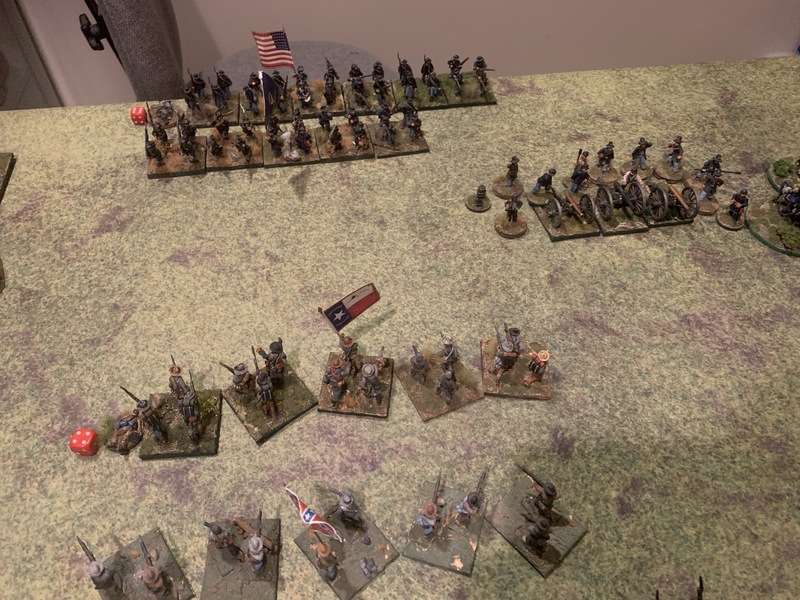 Now the Yanks charge, and the rebs roll very poorly on their defensive fire volley.  The rebel regiment behind the shooters is unformed as a result of passing through the rocky ground visible behind them, where the rebel skirmishers evaded to. 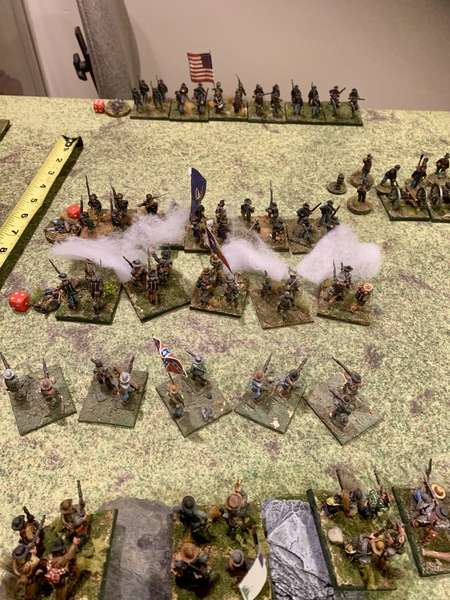 The Texans are thrown back, Whipped, when the Union regiment decisively beats it in the charge dice comparison.  The Yanks elect to halt, Formed, to face the rebel skirmishers in the rocks.  Another Union charge next turn could drive the skirmishers back if they evade. 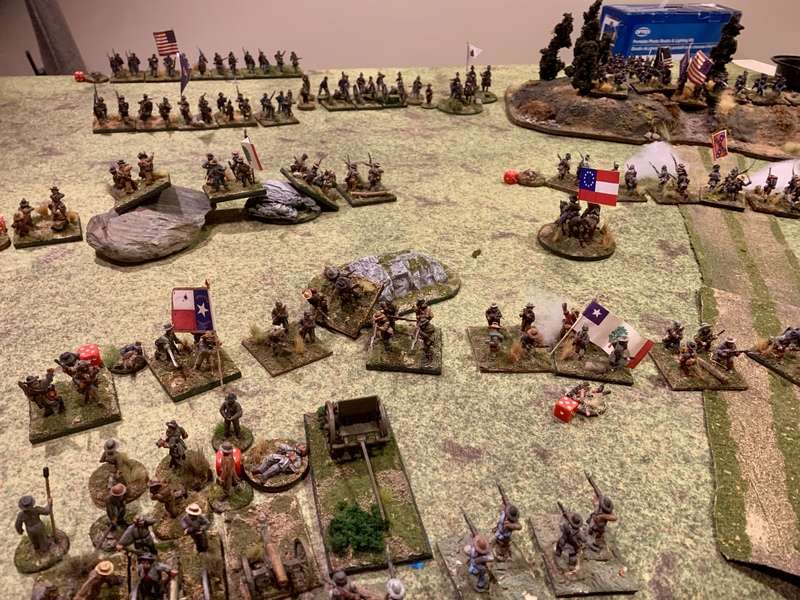 With two regiments Whipped, the Rebel brigade is now considered Faltering, which is one step away in the morale rules from its complete collapse.   It is possible to bring a Faltering brigade back to its normal state (called Obeying Orders) through the application of an available Staff Officer and some good die rolling.   Just for fun, and to test this mechanic, I was in fact able to get my brigade to stand, but in surveying the odds, the Union defenders were too strong and relatively unscathed, and with the rebel units mostly battered, I called it a day.

In this simple fight, described over three posts, I've essentially learned the easy part of the game (movement, formation, and fire combat).    The turn sequence is fairly simple - IGO/UGO, but the mechanics are not overly complex.  I like the fragility of units - seeing a brigade get chewed up relatively quickly felt right from what I know of Civil War combat.   The harder parts of the game are charges (though I conducted enough of them to feel that I'd understood it) and brigade/divisional morale.  Next time, I'll try several brigades a side and give the Command and Staff Officer rules a workout.

Blessings to your hardtack,

Good evening friends.   Finishing up my last post on the Gorgon Studios minis which will make up my interwar/ear war Canadian platoon for an ongoing pulp projects.  Again, I have lots of praise for the Gorgon sculpts, los of detail and character, and the variety of specialist figures allows for a well rounded platoon with supports to be fielded.

Here a Bren gunner and his assistant get to wok in the snow.  The rifle of the assistant is separately cast, which is a nice touch.

Bren gunner and No. 2 moving, both in leather jerkins, which adds some variety to the rest of the sculpts in greatcoats.

Sniper and spotter set up behind a snowy log.  Let’s hope they have silver bullets for that SMLE!

“Hello, I’d like to order a pizza delivered to the following grid reference."

Perhaps they’re calling HMCA Timber Wolf for pickup, or to send down some hot rum.

Major Maynad consults with the local Mounties while his native guide looks on.

Thanks for looking.   Now that I have a significant number of minis finished for this project, I think I need to start gaming with them!