In Praise of Game Masters, Or, Eye Deep In Heck

Mike M. is one of my oldest gaming friends.  We have an acquaintance of over twenty-five years, long enough to see children born and raised, divorce, career advances and setbacks.   In all that time I’ve known him, Mike has always been one thing - an enthusiastic and inventive gamer and games master.

Every hobby needs extroverts, because who would run our games otherwise?  Mike is an extrovert. with a personality and a way of talking that often reminds me of the actor James Mason. 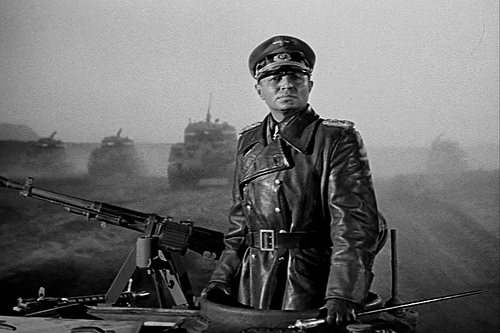 I’m sure this is how Mike sees himself when gaming.

Every gaming group needs a fellow like Mike, someone to show up with five boxes and a plan for a game, while the rest of us our shilly-shallying and wondering if Frostrgrave is just a fad, a lamentable trend, or something to get in on.  By the time that debate has gone in circles a few times, Mike already has something laid out and ready to go.  In short, he’s a leader of men.

Mike’s a good chap to be around, even if I would want to be shipwrecked on a desert island with him.  Unless, of course, his collection of models and figures was also shipwrecked.   Though, knowing Mike, I am sure he would have made a game of the Charge of the Light Brigade out of palm fronds, coconuts, and bits of lava while the rest of us were trying to spear our first fish in the lagoon.   But I digress.  For as long as I’ve known him, he’s been both thrifty and resourceful.   When we first met, his terrain unashamedly included packs of green kitchen scouring pads from the dollar store, which could be hills or ridges.  The troops were almost always plastic and 1/72nd scale/20mm.  It was always eclectic and productive.   If Mike had a notion to do Thirty Years War, he’d find a great deal on a truck of Revell figures,  and emerge three months later with a game ready to go.

As we’ve gotten older, Mike is still thrifty, but more concerned about the look of the thing.  As he said to me recently, he’s become a terrain snob.  Perhaps this is the same impulse that leads men in middle age to pursue trophy wives half their age, only in Mike’s case channeled in a more fruitful direction.

Yesterday the local games were invited by Stephen to his palatial estate in the country and about eight stout fellows answered the call after meeting for breakfast at a greasy spoon.  Not surprisingly, Mike had a game in his car.  It was based on the Gallipoli campaign, a Turkish assault on Anzac defences.  Mike trotted it all in from his car, and in thirty minutes had this set up. 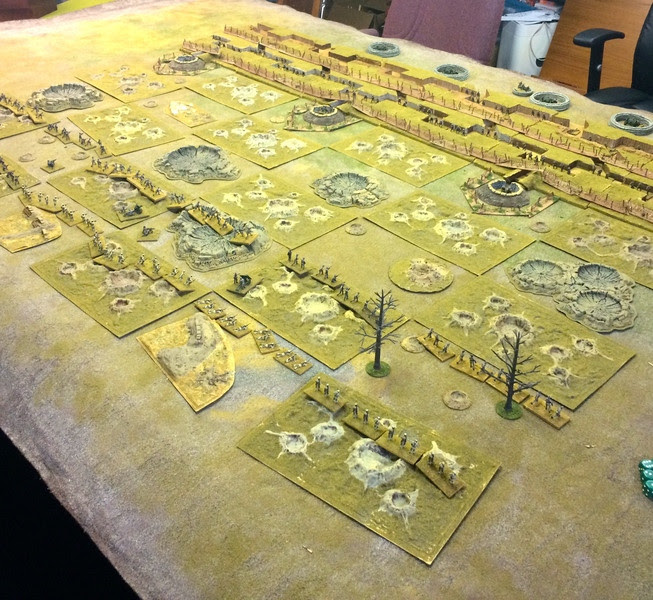 The troops were all from Mike’s collection, all painted.  Some were HAT, like these fellows who were actually Turks.  When he described how he had made more out of plastic Japanese from the Russo-Japanese war with heads from BEF figures only with the headgear altered, I confess I went a bit cross-eyed. 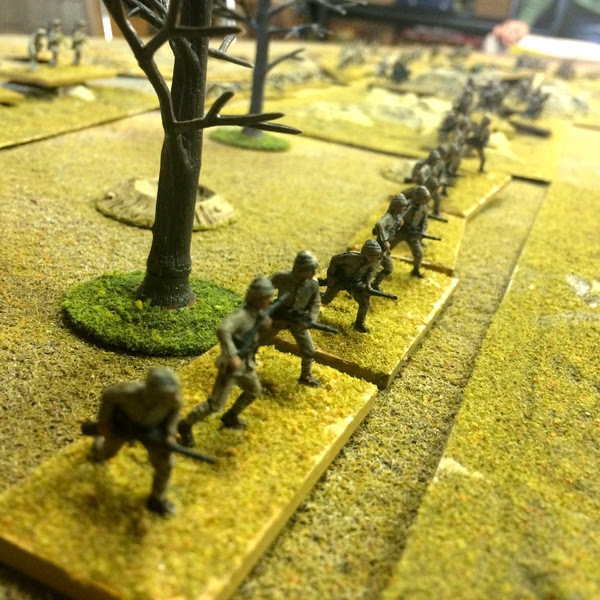 A view of the Anzac trenches, defended by Aussies and Kiwis.  The trenches are his own manufacture, though Mike admitted he had bought the wire off of someone else.  The  game was laid out in squares, and theTurkish objective was to cut through both lines of trenches along one row of squares and establish a unit in the Turkish rear. 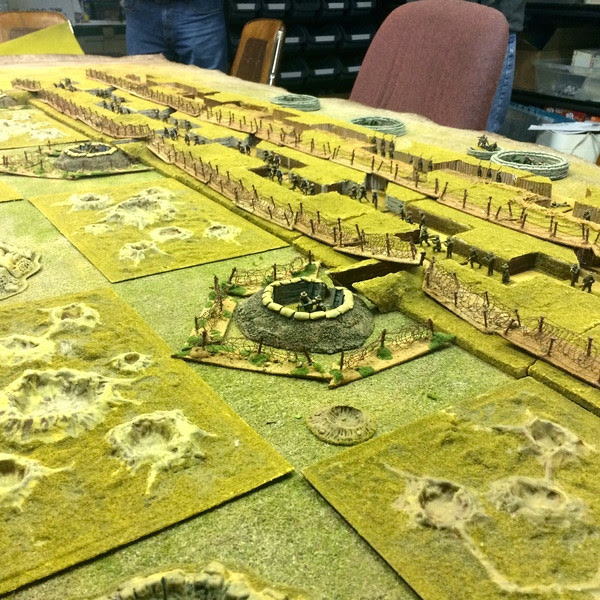 Kiwi defenders wait for their prey, doubtless after a good haka.  The rules were Mike’s, loosely based I think on Peter Pig’s Square Bashing but slimmed down to one sheet of paper. 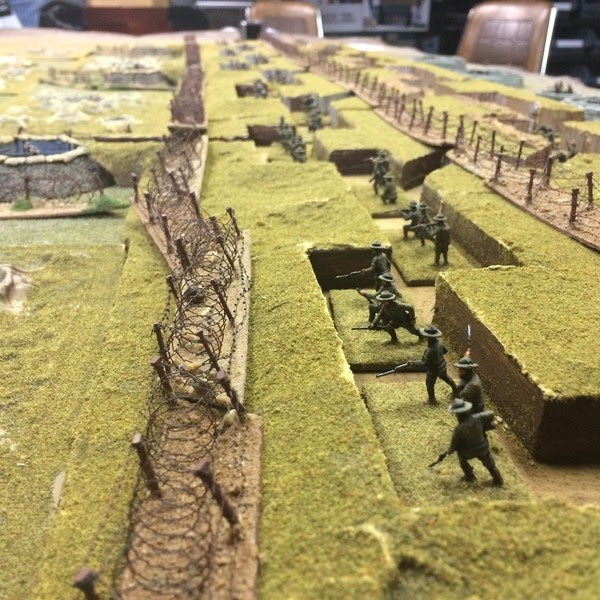 It started so well.   Both sides had artillery, and the Turks had four dice of off board guns that they could allocate each turn, plus two onboard infantry guns.  As the artillery commander I used all my dice to successfully clear out two of the three MG nests on turn one.  Hurrah!  Turks surge forward. 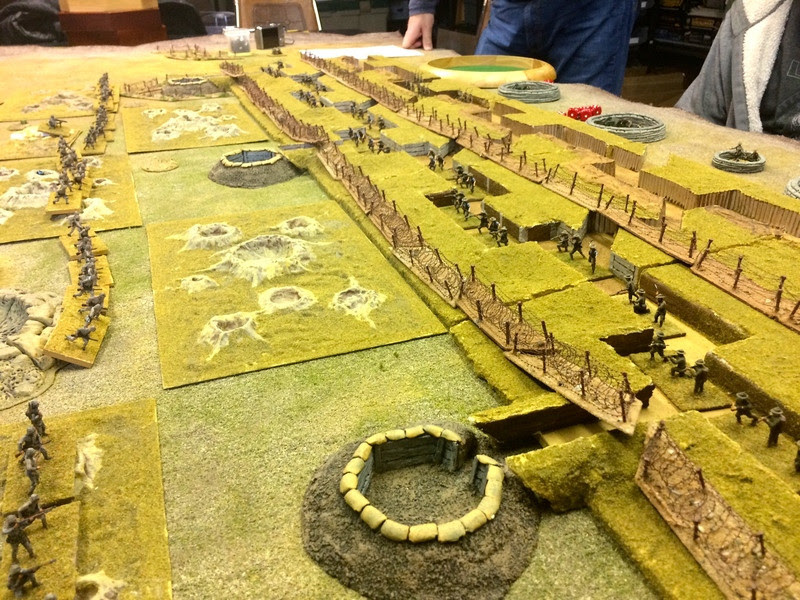 As Mike warned us, it soon got bloody.  The Turks got stalled and were badly cut up on our left, but on the right we used artillery to reinforce success.  Soon we had the wire cleared on some of the forward trenches and were assaulting, only to be thrown back several times before we got a foothold. 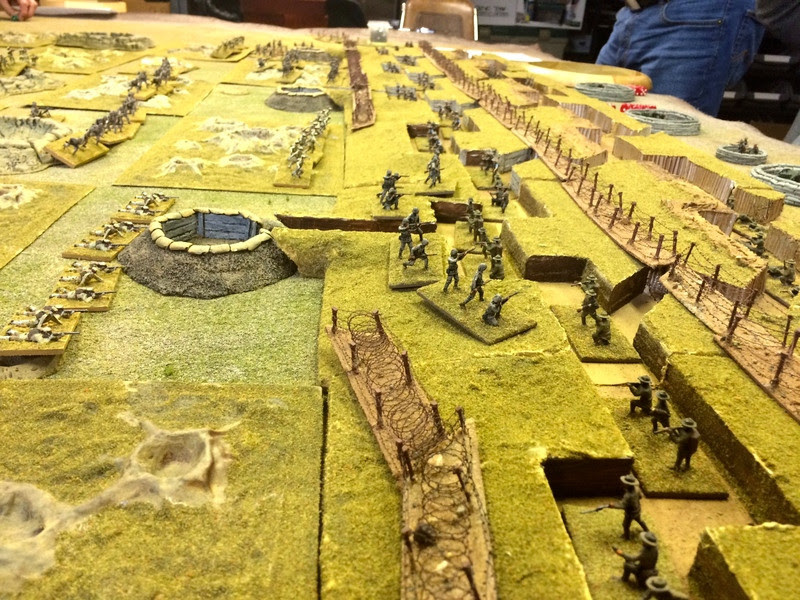 The Kiwis on the far left of the line did very well, throwing back repeated assaults.   By this point, several of the Turkish players were talking about putting their underwear on their heads and pencils up their noses. 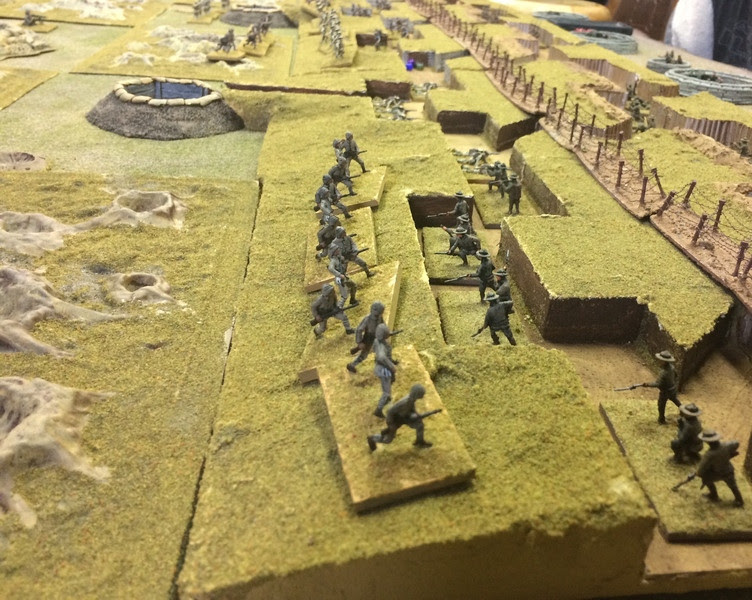 No pictures of the game’s end, though it was a squeaker of a victory by the Turks.  I am not sure if the game really taught me anything about the Gallipoli campaign, but it provided a satisfying lesson in trench warfare but still playable enough to be a game.  I had to leave by lunchtime, and the lads were setting up spaceships for Full Thrust and figures for Chain of Command.   I was sorry to leave, but had a splendid morning.

So here’s to the Mikes of our hobby.  It would be a damned poorer show without them.

Blessings to your die rolls.