Recently I finished five more bases of Canadian militia from the Perry Brothers Intervention range for my Alt-ACW project.   They are based in the usual groups of four, and the two NCOs are based singly for skirmish games like Sharpe Practice.

These fellows represent some experiments with painting.   For their red tunics, two are done in simple Army Painter Red with no wash; two are done in GW Contrast paint, and the rest are done using the tri-tone Foundry paint system.  I had recently ordered the Foundry ACW paint set as an experiment, and since it includes red (presumably for Zouaves) as well as blue, browns and metals for muskets and black for equipment, I thought I would try them out with these lads. 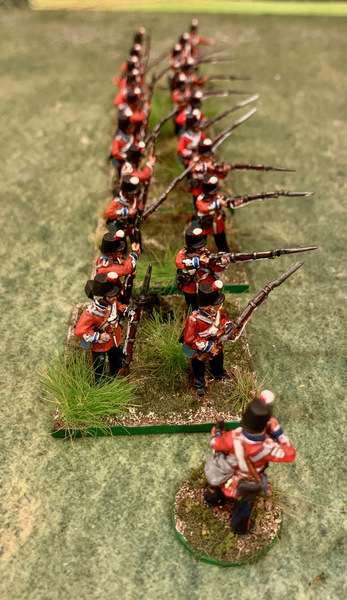 Asking around on wargames Twitter (pretty much the only part of Twitter that I enjoy these days),  learned that the preferred wisdom was to apply the Foundry paints to a black undercoat.  Unfortunately, my rubbish eyesight has troubles picking fine details out of the black, whereas if I prime the figures with  with Citadel white bone spray (or whatever they call it) and then give it a bit of a go with a darker Citadel wash (flesh or brown, whatever’s handy), then I can see the details and the white undercoat is muted and is easier to cover.   The finished result is pleasing enough to me.  I'

l’ll still use black primer for smaller figures (15mm and 6mm) but for 28mm I think this works best for me.

These militia figures with their tall shakos are quite attractive, and since I have no plans to do Napoleonics in 28mm, they are probably the closest I’ll ever get to painting Naps in the big scale.

I’m quite pleased by the final result.   I have a militia colour party as well as another British gun and crew and some senior officers, so we should soon see some alt-ACW gaming on the table.

Thanks for looking.  Cheers and blessings to your brushes!