A Yankee Spy In Upper Canada

“Say, boys, those look like new rifles.  English made?”

It was an exciting day in Thorold, a small town in Welland County near the Niagara border.  The County militia were holding their Camp of Instruction, and farm boys and clerks in their smart red uniforms were all too happy to show off to the local ladies.  No one gave much thought to a charming and dapper American, a commercial traveller on his way to York.

“That’s right.  These are Enfields, just issued last month, straight out of the packing crates.   They take these new percussion caps.   Never misfire."

The Corporal’s comrade laughed.   “The other companies are green with envy, they still have old German smoothbores.  We’re a shoe-in to win the musketry competition this afternoon."

Alfonso Wade joined in the laughter.  “My money’s on you boys and your fine rifles to win today, that’s for sure.”  He made a mental note of their armaments, while wondering if his own regiment had been this green before First Bull Run.   He’d seen more than his share of fighting since then, which is why he’d been tasked to trade his cavalry uniform for a gaudy suit and rail tickets to a dozen Upper Canada towns.  It was a pleasant way to finish the summer, and if the US had to fight England, as was looking more and more likely, the generals would want all the information they could get. 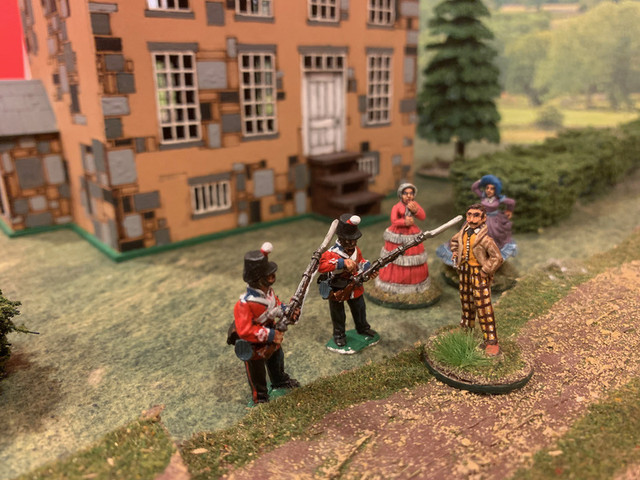 “Look, Mr. Wade, here come the Yeomanry!  Aren’t they handsome?”  Isabella Green took the American’s arm, eliciting a look of envy from her sister as she took the man’s other arm.   Wade was happy to play the object of their competition.  These Canadian girls were friendly enough!  As the troopers rode by, Wade looked them over with a discerning eye, noting their lack of carbines and cartridge boxes on their belts.  It’d be a shame to just shoot them out of their saddles, he thought, but if they put their faith in their sabres, well …. 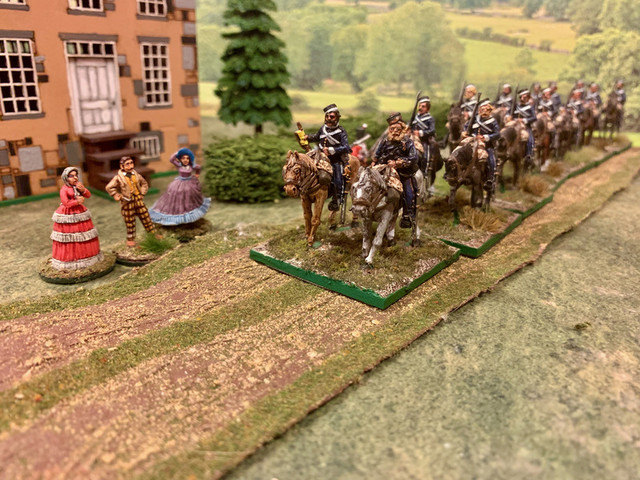 As the events sparked by the Trent Affair continue to spiral out of control, there are a dozen young army officers like Capt. Wade active from Halifax to the Niagara gathering information in the late summer of 1862.

(Note - figures are Perrys except for the civilians, which are by Architects of War/Noble Knight Games).