Last night three of us tried War of the Ring at the club.   Vincent, who owns the store we play at, raised his eyebrows.  “That game takes a long time, you know, like, six hours”.   He was right.  We didn’t get it finished in the three hours we had, but we got much of it figured out and we had a lot of fun doing it.

Steve and Bruce took the Shadow side, and I took the free peoples.   Here I watch as the forces of evil mass on the borders of Gondor.  My strategy was to try and push the Fellowship as far each turn as I could.   It seems to take about six to eight turns for the Shadow player to get Mordor and Harad to a state of war and to get enough forces massed on the border to start the attack on Gondor.   During that time I could have detached Strider  and Gandalf from the Fellowship and moved them south.  They might have had a better chance of preparing Gondor and encouraging Rohan to get into the war.  Bruce came out last night with a sheaf of printouts of strategy tips for the game from various websites, I will clearly have to do some research. 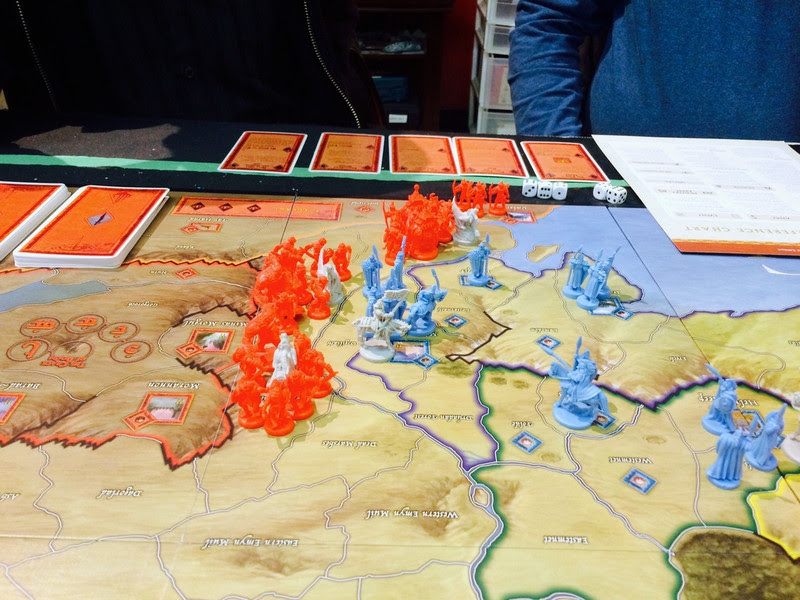 Too late.  By about turn 10, Minas Tirith had fallen to a siege, and Rohan was more or less just sitting around watching.   I think as the Good player I need to find a better strategy for getting Rohan into the war to aid Gondor.  The only thing I had going for me was a reinforced garrison in Dol Amroth, thanks to a Muster card called Prince Imrahil and his followers.   That garrison was a rock against which the Shadow armies broke in a terrible run of dice, which would have given me a bit of a base left in Gondor had we had more time to play.   It would have taken Steve and Bruce time to muster more troops and move them into the war. 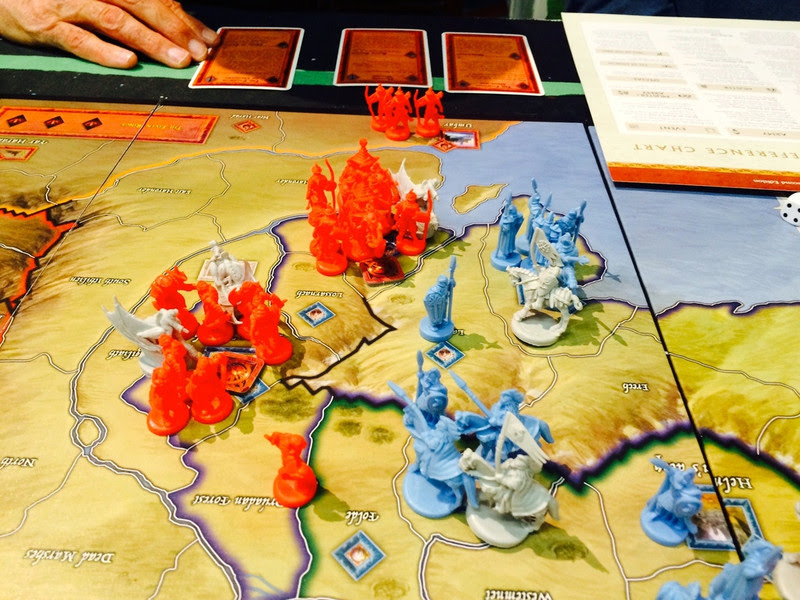 During all this time, the Fellowship had gotten very close to Dale.  My hope was to use them to activate the Northern peoples and get them into the fight, then make a run with the ring bearers from Dale all the way to the gates of Morrannon and into Mordor.   I think the only real hope of the Good player is to run the Fellowship as hard and fast as possible and trade the cities of Men for time. 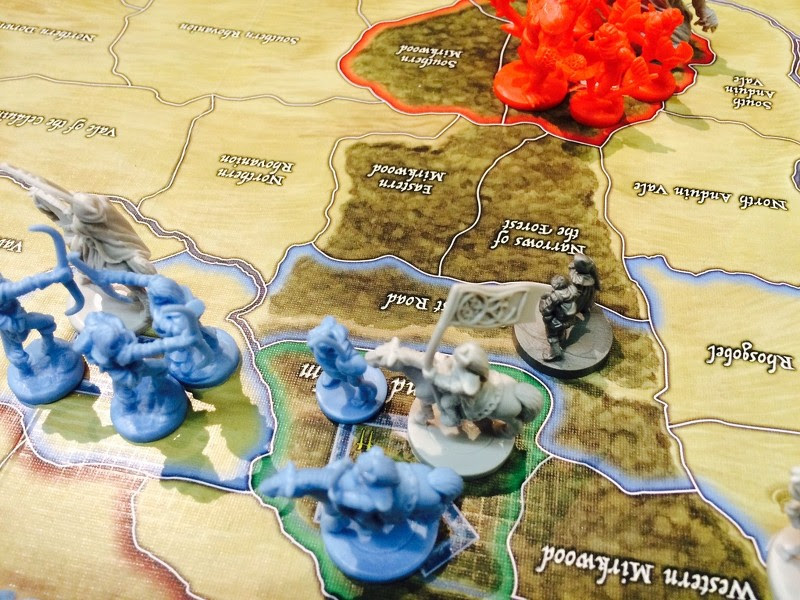 Also yesterday, the first expansion of War or the Rung from Ares Games arrived in the mail, though we didn’t have time to figure it out last night. 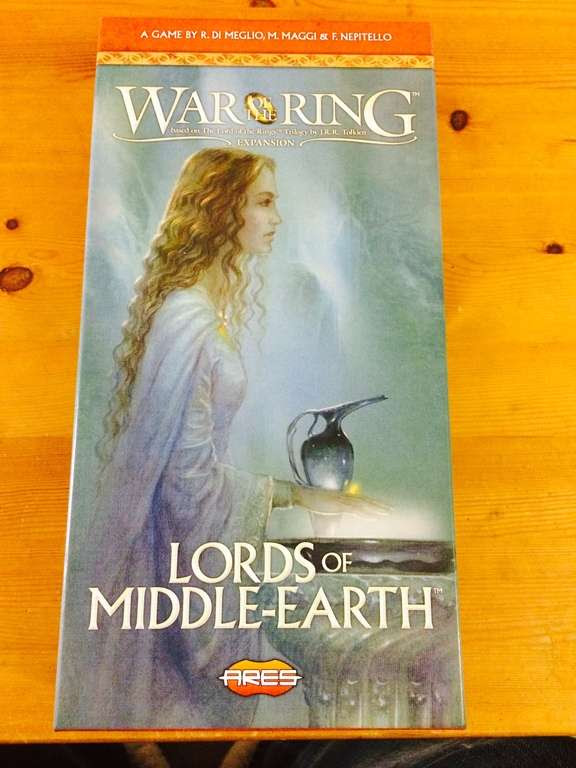 This expansion allows the Good player to use some of the key figures of the Council, Elrond and Galadriel, as well as an enhanced role for Gandalf.   The Good player gets three new action dice which represent the three Elven rings of power worn by Gandalf, Elrond and Galadriel.  The Evil player gets some additional minions, including an enhanced Nazgul King, a new baddie called Gothmog, Lt. of Minas Morgul, and of course the dreaded Balrog. 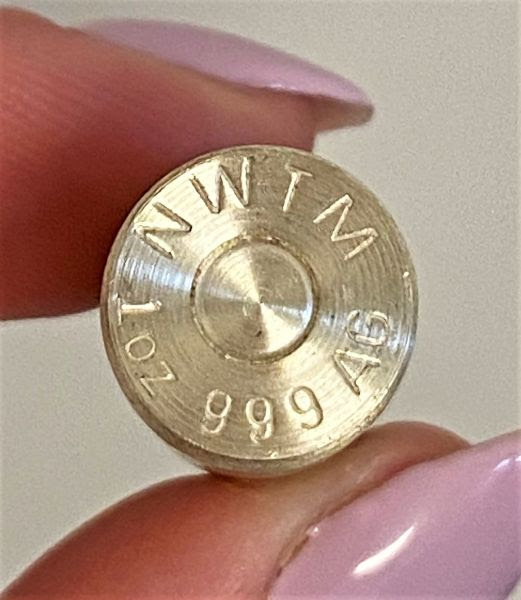 Some of the new cards that come with this expansion. 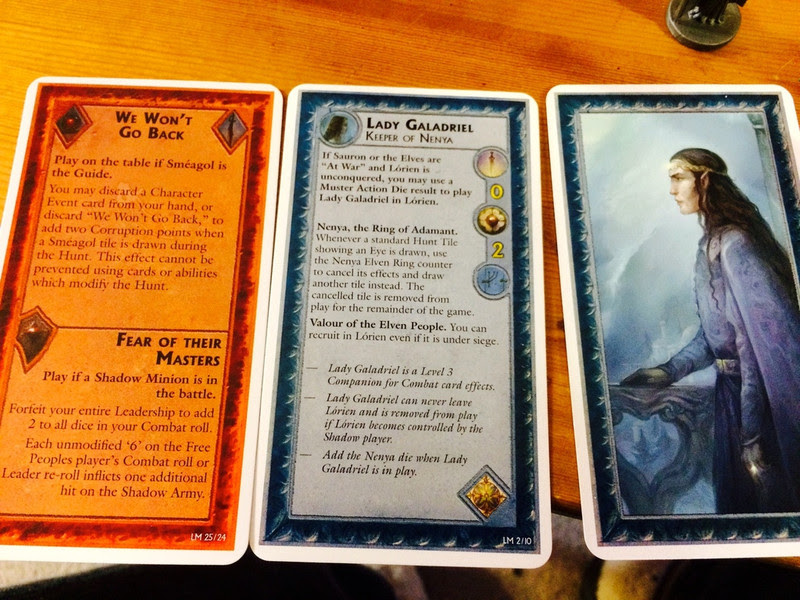 I’m looking forward to playing more with this game and trying the expansion set.