Looking Back On 2015: Hobby Highlights

2015 was a difficult year in some ways and a very happy way in others.  It was also a year of transition. From January through March I had my head down finishing a thesis.   In June I finished my MA program paid for by my employer, and Madame Padre and I moved several hours north and east from Kitchener to Barrie here in Ontario. 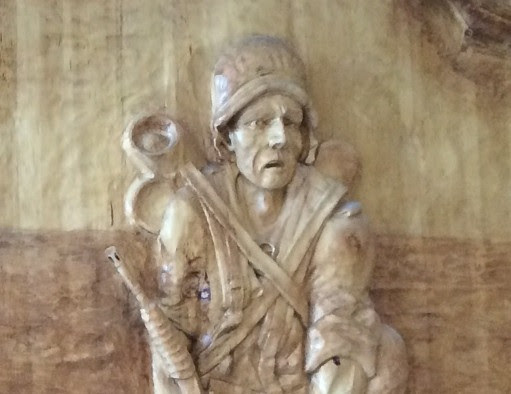 About that time we learned that my wife had cancer. I started a new job in my new posting at the Chaplain School at CFB Borden.   In September Kay and I took a holiday to Europe, visiting Iceland and Germany.  I amused myself in Erfurt by visiting a mostly unknown battlefield of 1813-1815 and tracing the steps of Napoleon.  Kay spent the fall and winter in chemo and came through with flying colours. 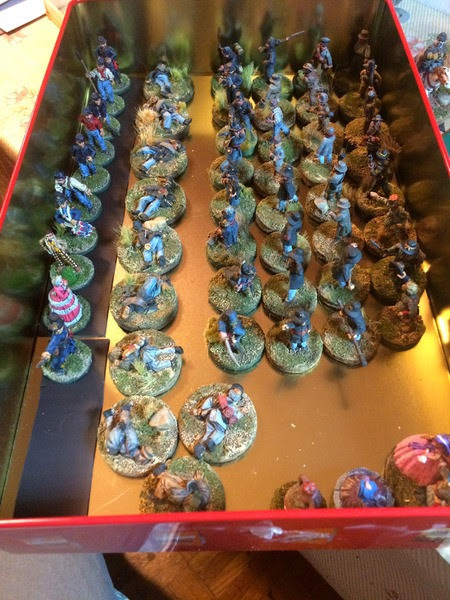 Embarking figures for yet another move.  One benefit of this move was that I got almost all of my figures on magnetic bases for storage in metal tins.

1) Participating in the Battle of Raab, a Napoleonic play by email game hosted by Jonathan Freitag. I played the role of Prince Eugene and was fortunate enough to win the battle, though I admit, the French have a lot of troops and generally better ones than the Austrians.   Very good fun to make big strategic and tactical decisions and see how they go.

2) Sam Mustafa rules.   I got to know two rules sets this year.  One was Sam’s ACW rules, Longstreet.  I blogged my first game of Longstreet and commented on it here. Looking over my blog entries for 2015, Longstreet was far and away the game I played most often in 2015.   I’ve played several sets of ACW rules, and haven’t enjoyed a set more than Longstreet. 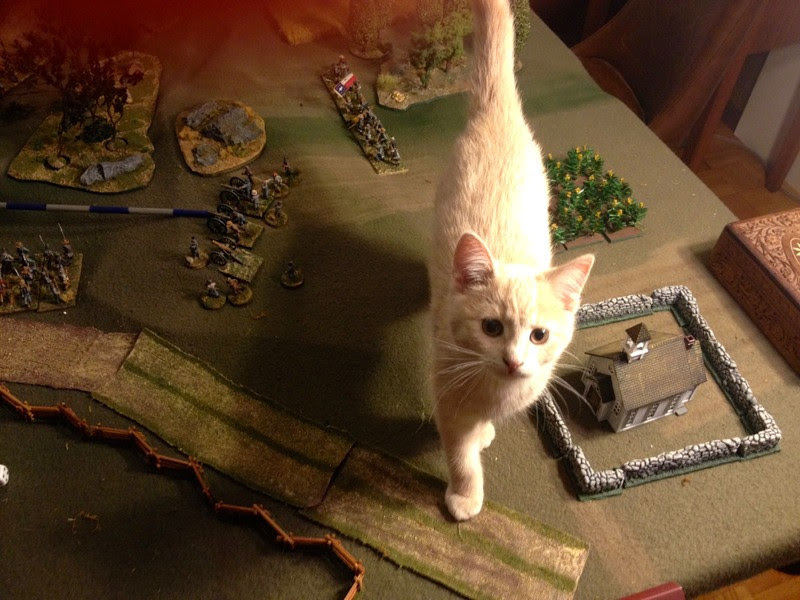 Luigi the Kitten joined us in 2015.  He thought Longstreet was fun and that GMB flags taste yummy.

I also enjoyed Sam’s new Napoleonic rules, Blucher.  Both are terrifically playable rules, doubtless too abstract and “gamy” for some grognards.  However, Blucher for me was a great introduction to Napoleonic gaming and a great way to start playing with my new 6mm collection. 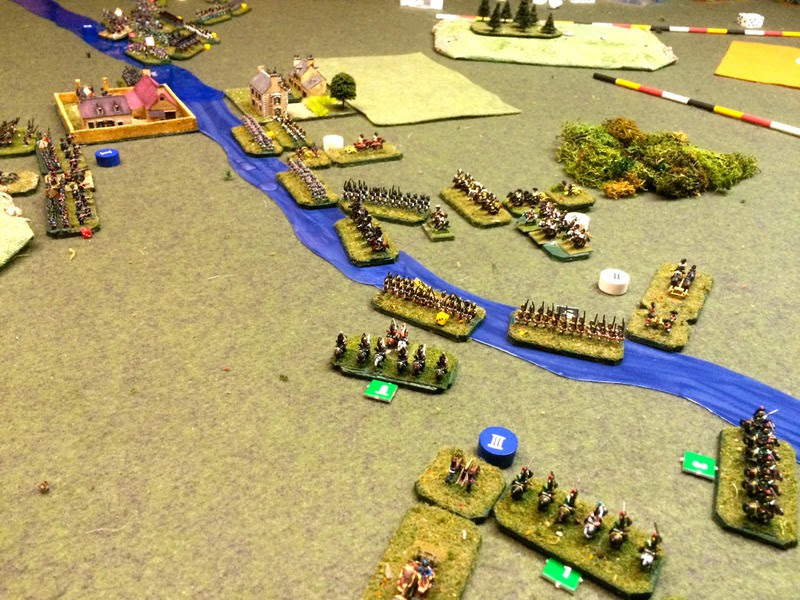 Finally putting the wee lads to the test.

3) Hot Lead was the highlight of my gaming year.  This is a modest event by European standards, but it’s a big deal in this part of Canada.   Next year I promise Rabbitman that I will run at least one game at Hot Lead this year.

4) Getting to play with my Lord of the Rings figures again, this time using an adaptation of Too Fat Lardies’ Dark Ages rules, Dux Brittanorum (I am never sure how to spell that).  First results have been encouraging. 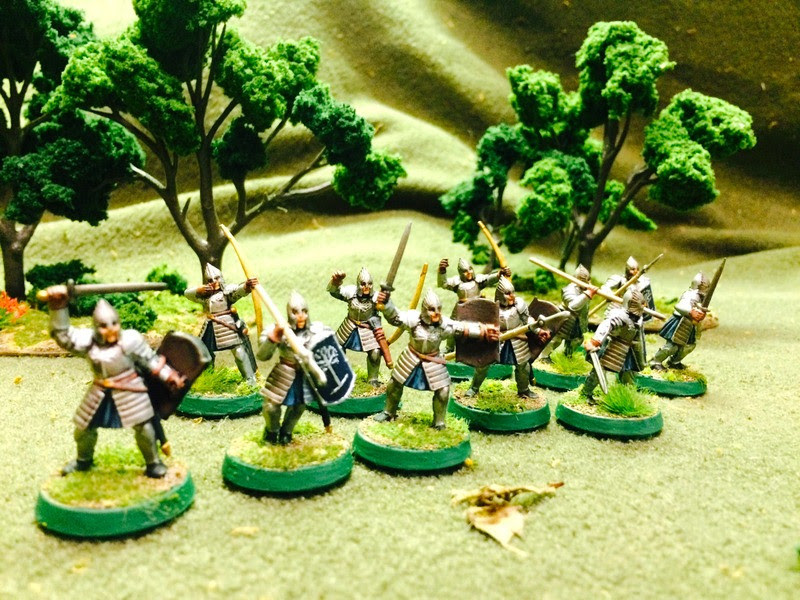 5) Last, and most important, has been the community of bloggers of which I am so grateful to be a part.   From the exchange of gifts this Christmas through various secret Santa schemes to the one on one exchanges with people who become friends, what Conrad Kinch calls the Freemasonry of the Hobby has been a huge blessing to me this year.  Some of the unlooked for kindnesses that appeared in the post included orcs from the Duchy of Tragardland, a small legion of ne’er do well rascals from Ireland, a gift of 15mm tank model kits for my Soviets from Steve Whitesel of the Sound Officers’ Call Blog, and of course the indispensable Foy mug (OK, I admit, I had to beg for that one).

Every time I post a photo of some recent painting efforts or a battle report, the comments and encouragement help me want to go on with the hobby.  If it was just me in my basement, I don’t think I’d do this.   I want to particularly thank all those who expressed their concern and encouragement this year, when we learned that my wife, Madame Padre, was diagnosed with advanced ovarian cancer.   We know we will beat this thing, but your support, prayers and kindness have made such a difference.  Bless you all.

Because real life was so busy, 2015 was not my best painting year.  Thanks to Richard Avery of the Vis Lardica website, there is a gallery of my painting achievements here.

So 2015 was definitely a less productive year, though I don’t think it was any the less enjoyable.

2015 GOALS AND OBJECTIVES, MET AND UNMET

1) Finish rebasing all that 6mm Napoleonics and play some games with them.

This goal was successfully met.  Of the figures I purchased in 2013, I managed to get 90% of the Austrians and 70% of the French based.  I had enough figures painted to stage a few decent little battles like this one.  Most of those bases were handmade, but I took mercy on my poor hands and purchased a batch of bespoke bases from a Canadian company, 6 Squared Studios, to finish the job in the new year.

2) Finish some Ottoman Spahis and some Russian SYW horse I bought off a chap late last year.

No progress in this regard.   Not a sausage.  Can’t say why.

3) Paint some wonderful ACW Iron Brigade figures from FG MiniZ Forgotten and Glorious - I don’t know why I haven’t gotten these done already.

I did make progress here.  I’m now 30% doneand the rest underway.  I should have the 24th Michigan finished and shown off soon. 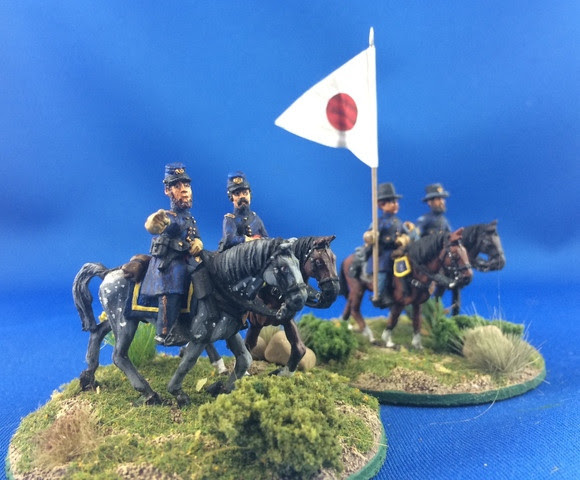 Forgotten and Glorious figures.  Why did it take me so long to start painting this gems?

4) Putter away at the Weird War Project.

5) Round out my 15mm WW2 Soviets and play Battlegroup Kursk with them.

The rounding out goal was 100% met and then some.  Besides some tanks I painted myself, in June I had the opportunity to purchase a friend’s 15mm collection en masse.  Sadly, I have yet to do anything with them. 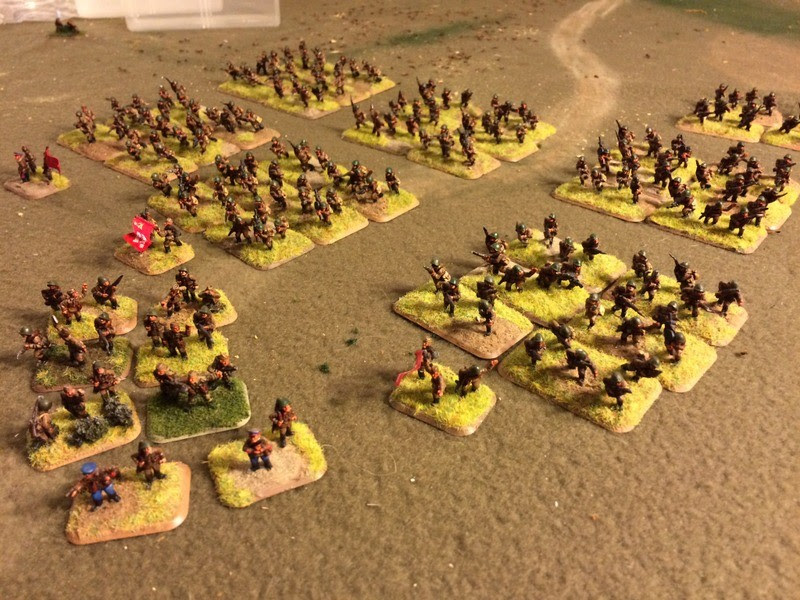 6) Play some more games, preferably with new friends I make in my next posting.

I’m happy with the amount of games I made.  Since moving to Barrie, I have connected with the local games club and made some new friends and connected with old ones.  The local gaming scene is more board game than miniature focused, but it’s better than the gaming desert I lived in a few years ago.

This goal was 99% met. Fitness took a bit of a hit.  You may have noticed I don’t brag about kilometres run during my painting totals any more.  My knees are not what they used to be.  More time in the pool and on the elliptical is in my future.

I’m not going to be super ambitious here, since my lack of focus (I prefer to call it eclecticism) and undisciplined work habits will have their say, but here’s what I’d like to do.

1) Put more work into the Weird War project and actually play a game.  My first objective is to try the adaptation to TFL’s Chain of Command Undead Paranormal (CoCUP) just published in the TFL Christmas Special.

2) Actually run a game at Hot Lead this year.  Game to be determined.

3) Work on my Pulp Project, The Rockies Ablaze.

4) Paint to my own lights and my own satisfaction.   I will be participating again in the Vis Lardica painting challenge, which I find is best suited to my pace and style of painting.

6) More Napoleonics, painting and playing, starting with the Blucher campaign rules, Scharnhorst, and French vs Austrians in Italy.  There may be a play by email campaign in this.  Interested?

7) Run another PBEM game of Diplomacy, as I was thinking today about the fun I had running the last in 2014.

8) Play well with others, be grateful for friends, family and blessings while we have them, and enjoy what I love best about this hobby - other people.

Blessings and joy to you all in the year to come!