Ask Not For Whom The Bell Tolls, Cancer, It Tolls For Three

On Thursday last,  Madame Padre got to ring the bell at the Cancer Treatment Centre to mark the end of her chemotherapy.  Six cycles, each of three weeks, began in late August and finished in time to celebrate Christmas.   When I say she rang the bell, she damned near pulled it off the wall. 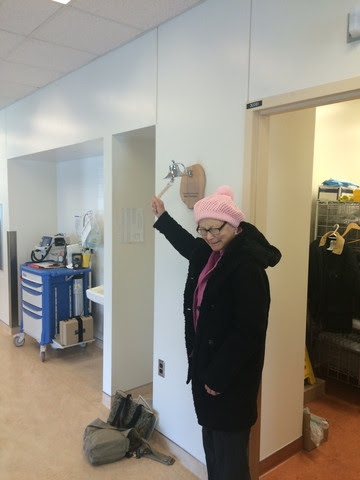 It’s a somewhat uncertain future that we face, as this type of cancer is sneaky and persistent, though after surgery and months of hellacious drugs running search and destroy missions through every nook and cranny, I think the foe is routed.   At any rate, we plan to live life as fully as we can and start that process by enjoying Christmas.  Mdme announced some epic decorating plans over breakfast, and we returned with a real tree and some bags of shiny things from the craft store.  I was hoping to score another bag of Christmas village trees for a winter warfare project I have in mind, but all the Christmas village stuff was wiped out.

So on we go.  I can say that the concern, thoughtfulness and support of friends, including readers of this blog, has made a huge difference.   Thank you.