When I was a teenager, I was given a game called Imperium (1977) by Game Designer’s Workshop which became a classic in the genre of mighty starships being launched and tearing into each other in mighty fleets to capture planets and gain resources to build yet more warships  to control a vast galaxy- that sort of thing.  I wish I still had that game, it gave me hours of pleasure.   It’s been long OOP, and while I haven’t found another copy, I think I’ve found a game that’s almost as good.

Imperial Stars II is a clever little game from one of my favourite clever little gaming companies, Victory Point Games.  The designer is Chris Taylor, who has done a whack of SF-themed games.  It’s a game about, well, starships being launched and tearing into each other in mighty fleets to capture planets and gain resources to build yet more warships  to control a vast galaxy 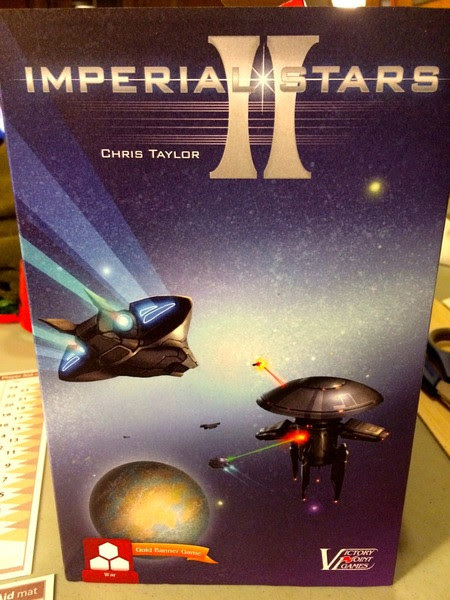 One of the admirable things about this game is that it includes two double-sided maps (11” by 17’) , giving you four possible maps to play on for a variety of gaming experiences.  This map in the photo below is a fairly cluttered one, with asteroids, nebulae, singularities and dust clouds.   Each special terrain hex slows down movement and poses a different headache in combat.  Maps vary in their degree of clutter.

Each game begins with a small fleet in being for either side, shown below in their starting positions on Turn 1.  Additional ships can be purchased from the groups in the boxes at the top and bottom of  the map. Ships are two kinds, escorts and capital ships.  Capital ships can survive one hit, and can be repaired.  Ships can also be turned into colony bases, which gives you a base of territory but reduces the size of your navy, so that’s a fine balance to maintain in the early stages of the game.  The light blue round tiles on the map are planets, which can be claimed by either player and turned into colonies. 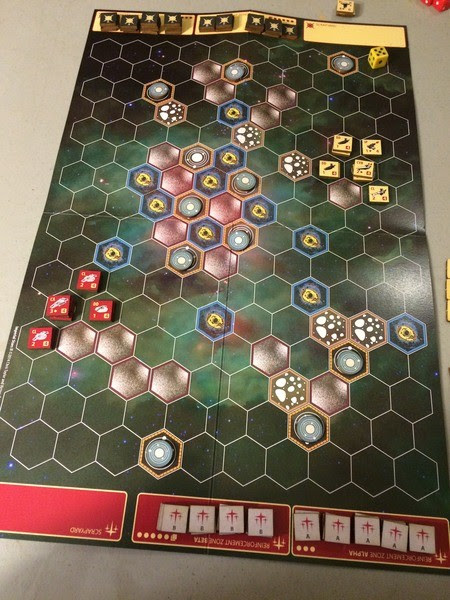 The game is driven by these “Op Chits”.  They are turned face down and mixed up, and drawn randomly by players in turn. They determine how many things or Ops a player gets to do in each phase.  Besides the number on the chit, players get an Op for each colony they posses, which is an incentive to get as many colonies as you can early on.  After a “Galactic Cycle” when each player uses their five Ops Chits, the lowest number is taken out of play, which means that each full turn (or Galactic Cycle) is shorter than the last turn.  Essentially this mechanic builds a clock into the game and keeps the game fairly short. 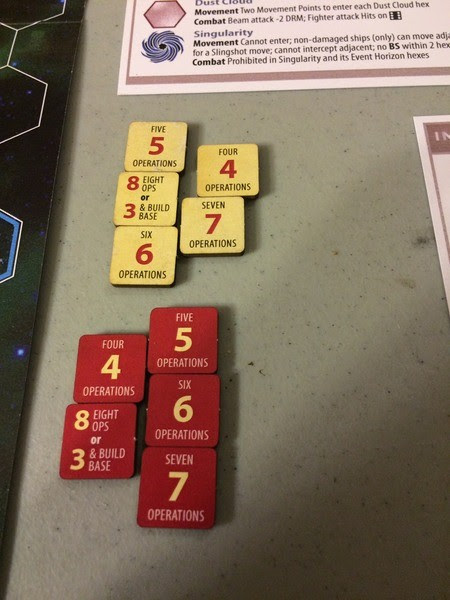 You also have to like a game where all the charts and tables fit on a single half sheet of paper. 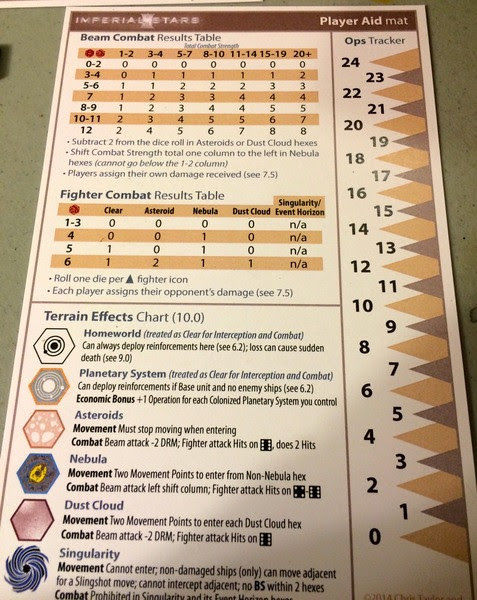 Another clever aspect to the game is that the planet hexes are assigned random qualities which basically act as power ups or wild cards.  Some have attributes that can only be used once, like advantages in a space battle, and others have ongoing benefits.  Here two ships from Red Fleet, a light carrier and light cruiser, close in on an unclaimed planet.

Having taken the planetary system, Red spends Op Points to convert the DD ship into a Colony Base, and gets the bonus, “Energy, Add Two Operations” which adds two op points to Red at the start of each subsequent phase for as long as Red controls the planet - one of the nicer benefits of the planet chits. 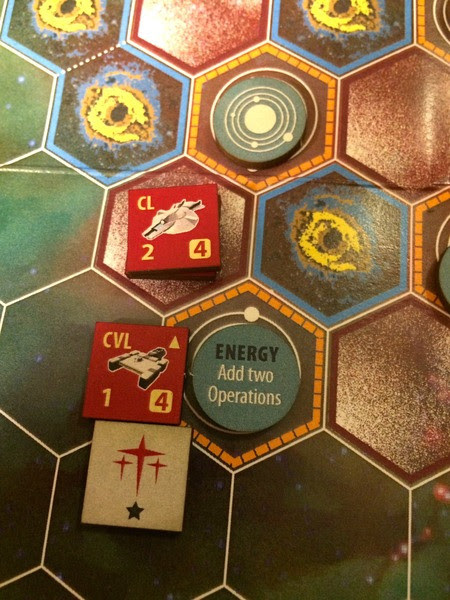 The situation at the end of the first of five Galactic Cycles in the game.  Red and Yellow both control five planets besides their home planets.  There have been no battles yet but I expect some will come soon.  Space combat is quite brutal and simple.  Ships fight each other using missiles if they have that capability in the first round of combat.  One hit destroys an escort and damages a capital ship.  Two hits destroy a capital ship.  Damaged capital ships can be repaired using ops points.  After the first round of missile combat, surviving ships fight a round of combat using beams, the number on the bottom left corner of the ship counters in the above photo.  Any ships surviving that round then fight another round of missile combat.  This sequence continues until one side is destroyed or runs.  Destroyed ships can be brought back into play as salvage, but that takes time and Ops Points.  A useful tactic is to build up fleets (up to six ship counters of the same side can stack in a hex) and try to intercept your opponent’s ships during his or her turn.  The forces of the two sides are symmetrical - same types of ships and same weapons capabilities.

Imperial Stars II is a simple and clever game, well suited to solitaire play because of the Ops Chits system.  It could be explained to another person in ten minutes and played to a conclusion in 2-3 hours tops.   At a fairly inexpensive price ($26.99 US) and with its four maps to give high replay ability, I recommend it to SF fans.  It could also be used as a scenario generator for miniature SF gamers who want some context for their space battles.