A very pleasant night Saturday evening at Rabbit HQ as the gang, which is the closest thing I have to a club at present and all stalwart chaps, gathered to blood some freshly painted samurai figures.  But first the usual show and tell.   Our chum Patrick, whose hosted several very original Interwar Chinese battles, unveiled this scratch built  Yangtze gunship in 1/72 scale, a crveryy nice piece of kit, looking appropriately dirty and rusty.  Talented fellow is young Patrick and a very kind one, as he gave me several packs of adhesive magnetic sheets found in his local dollar store - just the thing for storing my larger bases in thrift store biscuit tins for the coming move. 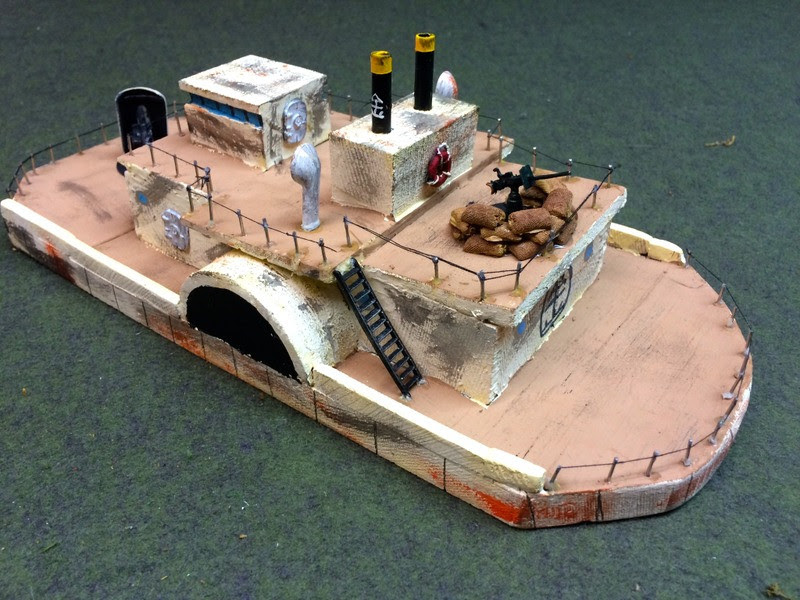 And another scratch-built vessel, this 1914-era Austrian gunboat, also built by Patrick, is modelled on the ships which opened fire on Belgrade at the start of the Great War.  It would look very suitable for a steampunk game too, methinks.  I quite like the big turrets at the bow. 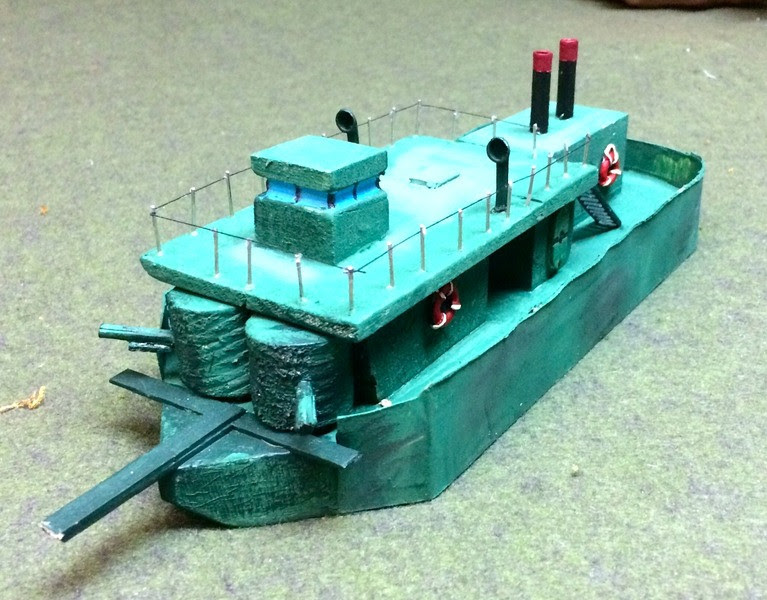 Both James and Other Mike have been collecting samurai figures of late, and had a sufficient number that we felt we could put them on the table and have a bash, along with James’ wonderful and carefully assembled  4Ground Japanese village models and a terrific temple bell that Mike had found in a pet store - it looked far better ornamenting our table than it would at the bottom of a fish tank.

James has a samurai retinue painted up, while Mike has a force of monks.  We put about 20 figures a side on the table, with the objective being the bell tower in the centre of a table.  Never being one to pass up the chance to play fighting monks, I sided with Patrick against James and Mike.  Here my three bowmen and some Sohei warrior monks wait in the walled garden of an inn, while the rest of my force sneaks around to the left of the table to deal with James’ sneaky snooty fellows.   I am facing James’ samurai while Patrick, to my left, squared off against Mike. 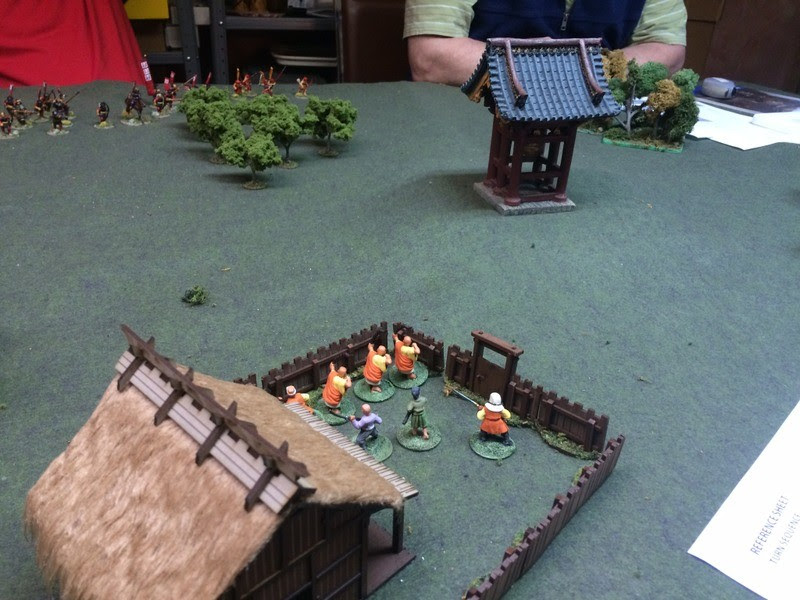 For rules we used the Osprey-published set, Ronin.  James was driving the bus, as he had read the rules, maybe an hour before play started.   Here’s a closeup of some of his samurai advancing.   The picture doesn’t quite capture how nice they are.  James does nice work. 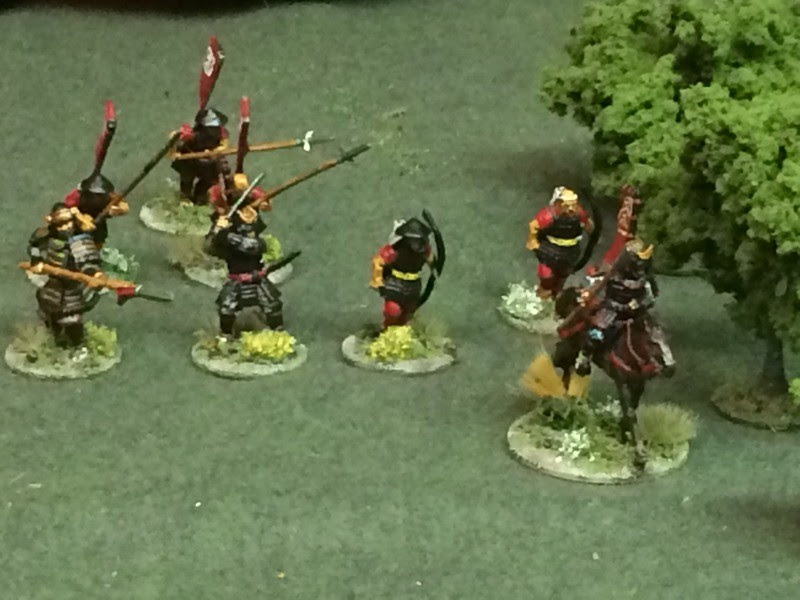 My monk archers start shooting and do some damage, inflicting stuns and light wounds on several of James’ fellows, and wounding his samurai boss’ horse.  One of my sohei monks rushes forward to have the honour of being the first to defend the bell tower,  He did quite well, cutting the samurai boss out of his saddle. 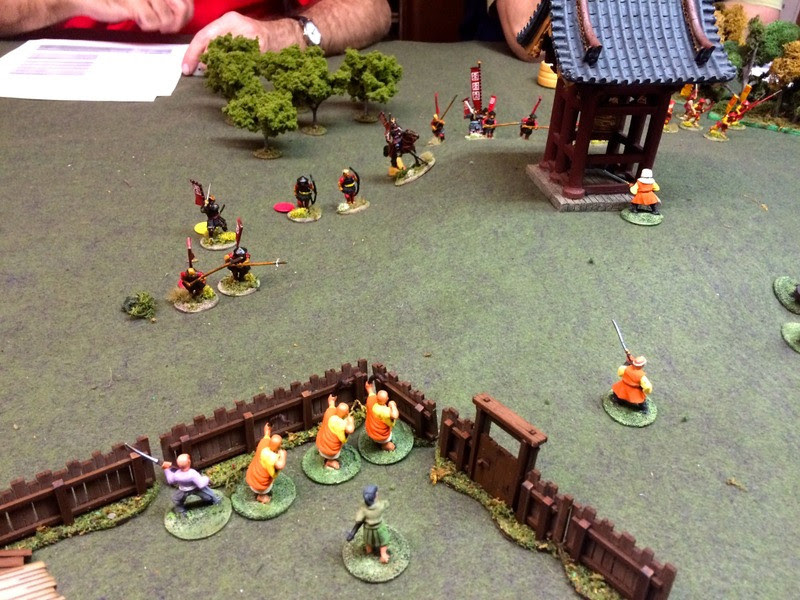 Two of my monks run into battle from my left flank to engage a samurai and an ashigaru.  Here’s where we found that the Ronin rules began to bog down for the number of figures we had brought to the table.  There was a lot I admired about the rules.  Fighters are rated for their personal initiative, modified by the kind of weapon they have and a base die roll.   Once initiative is determined, players get to secretly decide how many of their actions (the number depends on the class of fighter) will be dedicated to attack and to defence.   It’s a clever system, but it takes a while to go through a fight, even two on two, and the results are not always fatal - many of our fights ended with figures wounded but still capable of fighting on and doing damage.  It was quite rare for a figure to be cut down, especially when we started taking armour into account, which was too late, alas, for the red chaps in this photo, who got slaughtered right away. 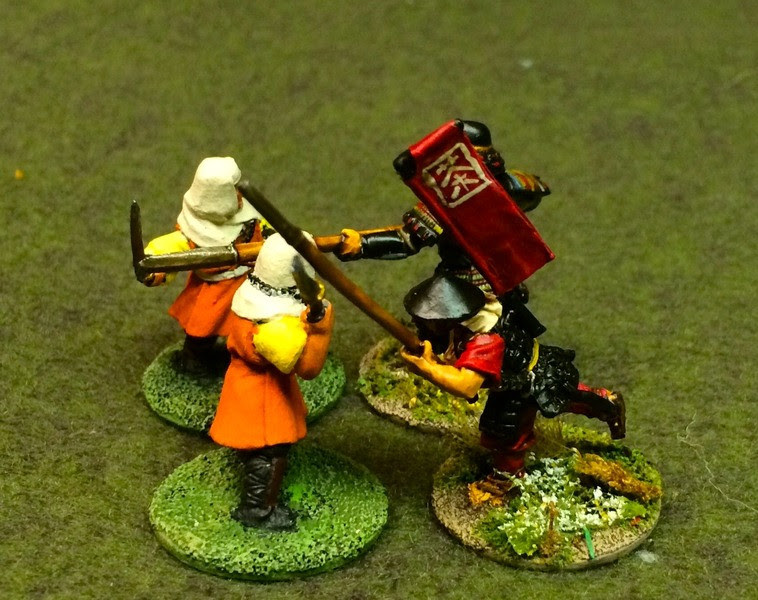 Within two hours things had gotten pretty bloody.  The red chits indicate where James’ samurai and ashigaru had been sliced and diced.   While almost all of my ten monks had taken one or more wounds, they were almost all standing, and we came to realize that monks in ronin are rated quite highly - they seem to be the Old Guard of feudal Japan.  James had pretty much thrown in the towel after two hours, whereas Patrick and Mike were still delicately probing, writing haiku, painting flower blossoms, or whatever else high born lords do.   James and I just got stuck in. 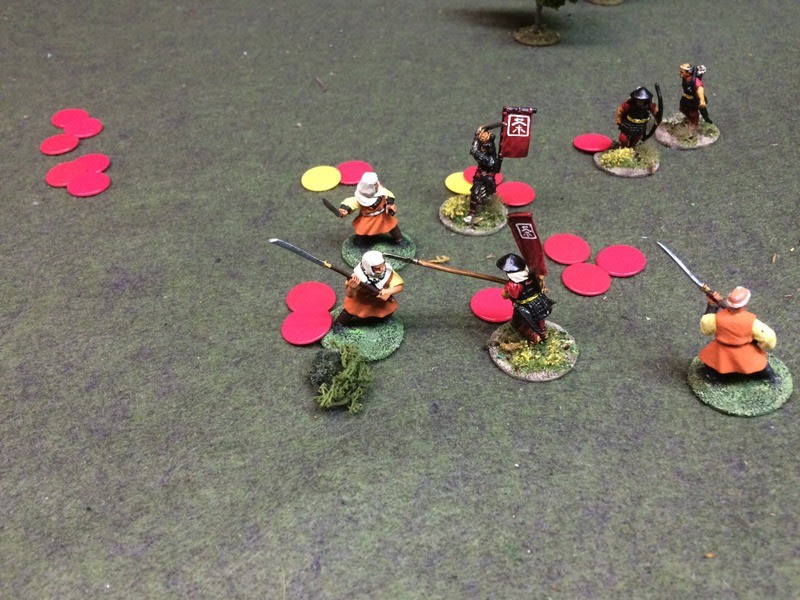 Conclusion - Ronin would probably work best as a club game with a dozen figures aside tops.  You can read James’ initial thoughts on Ronin here, but as for me,  I like the mechanics, as far as I understood them, and the choice of attack/defence options adds an interesting degree of tactics and suspense to the game.  However, as I’ve noticed from another Osprey rules set I’ve played, In Her Majesty’s Name, the rules seem quite granular and best-suited to small level actions.  For a battle involving retinues of twenty or more figures a side, I think one would need something that handled groups of warriors moving and fighting together.   I believe there is a variant of Too Fat Lardies’ Sharpe Practice for Shogunate Japan out there somewhere, and I’ll leave that to James and Mike to track down.

While it’s not a period I’m overly interesting in, I would be interested in playing this again, especially when James gets his Ikko-Ikki bandits painted - that would make an interesting alternative to battles involving celestial elite monks.

Cheers and blessings to your die rolls!