Batons for the Marshals - Getting Ready to Play Blucher

Slowly I’m getting ready to put my 6mm Naptoleonics figures on the table for the first time.   I’ve got enough figures - Austrians and French - rebased and ready to go.  I’ve got some scenery ready, with more ready soon.  I’ve got several sets of rules, including Sam Mustafa’s Blucher, which I’m going to try first.

But how to move the troops around the table, given that Blucher, like other Sam Mustafa games, uses Base Widths rather than conventional measurements.  Well, Napoleon said that every soldier carries a Marshal’s baton in his knapsack, and I found four. 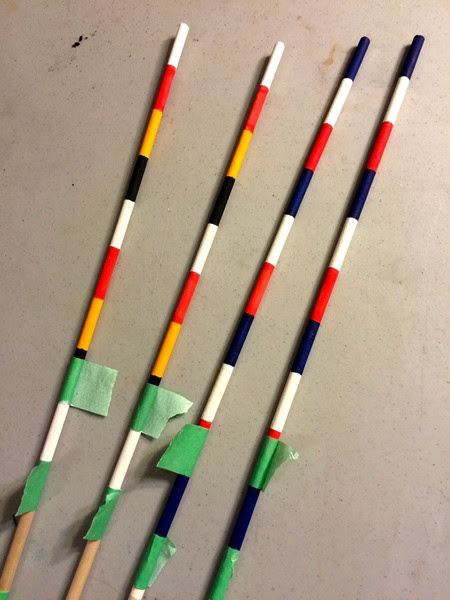 I decided to reuse an idea I had for Longstreet, and prepare several measuring sticks in different national colours, so two for the Austrians and two for the French.  My standard Napoleonics Base Widths are 30mm, so these dowels are measured and painted in 30mm increments.  They are currently two feet long, which seems like a good length, though I may cut them in half.

I think atmospheric touches like silly hats make a game, and these splashes of colour will hopefully make the game more entertaining, especially if I host a Blucher game at a convention.

Hopefully I’ll show these measuring sticks in use this weekend.

Blessings to your die rolls and brushes!