There was a while back around 2012 when this blog was buzzing with excitement about my foray into 6mm Napoleonics.  I had purchased a large collection of painted Austrian and French figures, bought some new figures from Baccus, and was learning to paint them.   I had picked up Sam Mustafa’s Blucher rules and had played a few games with them, and was generally happy with my progress.   Then a move, my wife getting sick and dying, a new duty assignment, retirement from the military, remarrying and starting a new life.   A lot of things got in the way, and I think the resurgence of my interest in this period and scale has to do with being in the happiest place I’ve ever been in my life.   Funny how it all works.

This Easter seemed like a good time for a wargaming vicar to live out the resurrection by raising my 6mm collection out of their boxes and taking Dave C. Brown’s General d’Armee rules for a spin.  I had previously played Dave’s ACW rules Pickett’s Charge (PC) and liked them, and found the mechanics similar enough that GdA was fairly easy to pick up.

I decided the the best way to learn the mechanics was to take two identical forces, thus, a French division of three infantry brigades, four batteries, and a light and heavy cavalry brigade faces its Austrian mirror image.   All units were rated as Line for simplicity’s sake.   This force selection seemed to promise enough complexity to get a sense of rules that claim to be scaled from Divisional to Corps level. 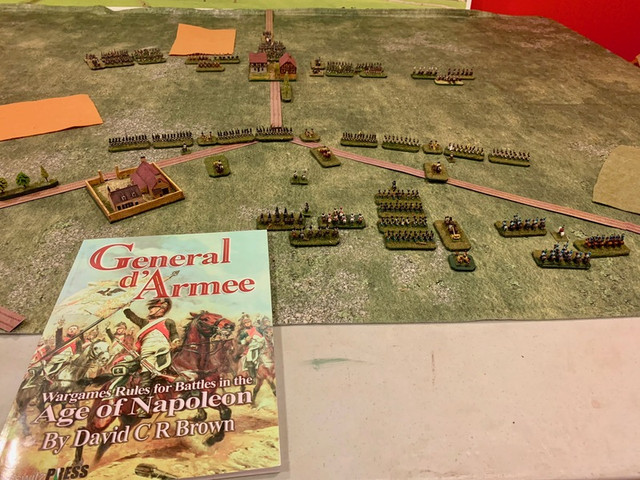 The Austrian force of General Albert Kurvi-Tasch (dubbed by Archduke Franz Joseph “More moustache than brain”) defends the key crossroads south of the village of Schlumpen and watches as the French of General Theodore d'Ordure, dubbed by Napoleon as “the Grossest of the Gross”, comes into view.   The backdrop is not 6mm, sorry about that. 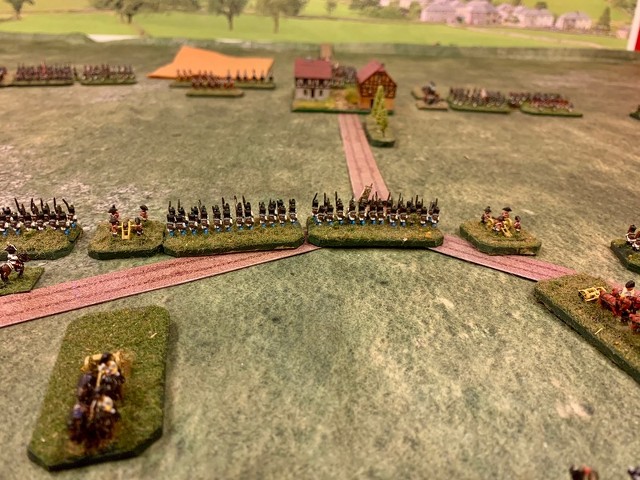 The battle began with the light brigades of cavalry scrimmaging on the Austrian right.    Dave’s charge procedure rules were basically familiar to me from PC and are fairly simple to administer in horse on horse actions, where there is no defensive volleying to complicate things.  At first things went fairly evenly, with the two brigades somewhat battered and retiring to reorganize.   When the went at it again, however, the Charge dice went disastrously for the French: their “2” vs the Austrian “12” on 2d^ (it’s all d6 based) saw the French light horse simply dissolve.  Charges can be exciting and tempting because you never quite know how they’ll go.

The French reserve advances through Schlumpen in a brigade column, hoping to punch a hole through the Austrian centre with the support of the heavy cavalry to their left and the two flanking infantry brigades.   As you have noticed by now, I am using small dice to keep track of casualties, though am not happy with the look.  Perhaps I need micro-dice?   I’m now wishing my unit stands had little slots for casualty dice like the cool kids have. 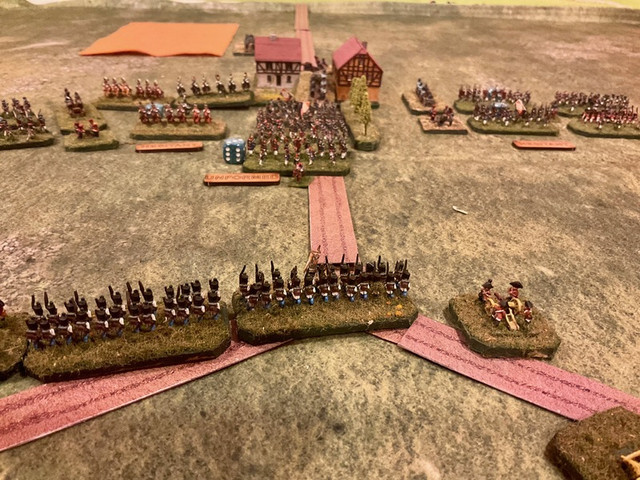 Artillery can be deadly in these rules.   The two Austrian batteries in the centre have savaged the lead unit in the assaulting brigade, and checked its advance.   Ordure moves his heavy cavalry forward to open the way, and the Austrians respond.  It’s still anyone’s battle. 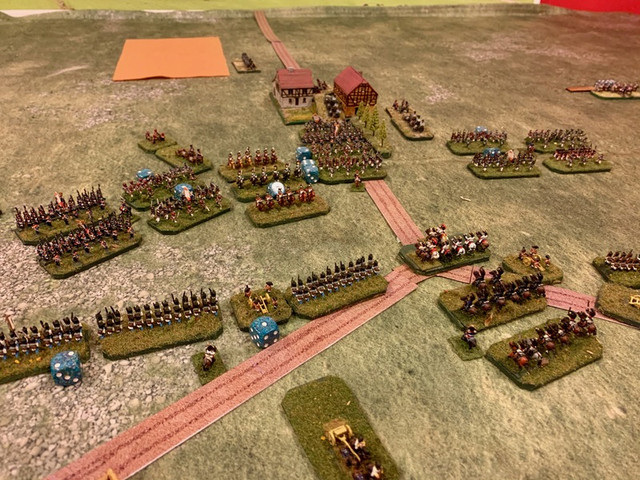 Austrian cuirassier and French dragoon trade blows, largely ineffectually, and the two brigades basically repel one another like bumper cars at a fairground.  For me this is where 6mm really shines as a visual scale with the clash of massed units.  I would never paint enough larger figures in my remaining lifetime to achieve the same effect.

Speaking of visual appeal, I’m quite happy with the table.  The game is being fought on a Geek Villain 6 by 4 fleece Grasslands mat, the roads are from Paper Terrain (glued to cardboard and then cut out) and the buildings are by Timecast which I really like. 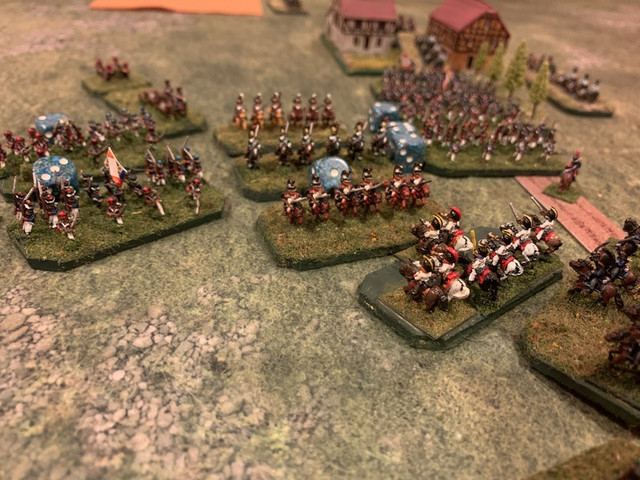 In the final clash of the game, the French columns advance on the Austrian lines.  I’m very happy to say that the two French infantry units in the centre are the first 6mm figures I ever painted, almost a decade ago now, and I’m very happy with the way they look.   At this point you may be wondering how I portray formations.  Good question.

All my units are based the same, in lines, though with French units I usually put some skirmishers in front.   However, because in my world a single base represents a single unit, I don’t have any way to represent the formation changes that GdA and other rules call for.  My core assumption then for this game is that each unit is currently in the formation that makes sense fir the situation and for its army doctrine.  Thus, here the French are in column and the Austrians are in line.   Infantry, if charged by cavalry, would go into square if they made the appropriate test.   Cavalry are generally in column.  I have enough limbers (another benefit of 6mm) to portray artillery either limbered or unlimbered.  It seems to work so far. 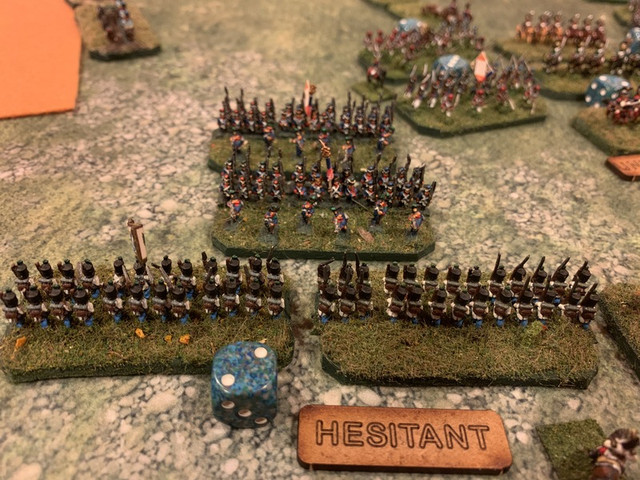 With the repulse of the French infantry (as in Dave’s ACW rules, defensive fire from an intact foe is pretty deadly), and with the destruction of the French light horse, the game seemed to be done and an Austrian victory.

One of the features of Dave’s rules that I especially like is command and control.  As in PC, GdA uses a varied number of Aides de Camp each turn to help ensure that your brigades do what you want them to do, and reduce the chance that they might go Hesitant and spend a turn dithering in uncertainty.    ADCs can help you salvage wavering brigades, can direct artillery in intensive bombardments useful to prepare for a charge, etc.   In this game the French could have 5 ADCs a turn to the Austrian 4, but you then have to roll for their availability each turn, so you seldom have enough, which adds some uncertainty and friction - no wonder Richard Clarke and TFL rep Dave’s rules, they are a natural fit with the TFL philosophy.

I look forward to revisiting GdA soon, preferably using an historical battle as the template.   I just finished using CCN to fight Wertingen, the Austrian defeat at the start of the 1805 Ulm campaign, and that seems a manageable sized battle to fight.

Thanks for reading.  Blessings to you tiny soldiers!