Command and Colours Napoleonics and the Battle of Wertingen: A Test Fight

So now that I’ve resurrected my French and Austrian 6mm miniatures and am frantically painting more while the mini-mojo courses through my bloodstream, what to do with them?   I could just fight some more random battles using points or whatever forces catch my fancy, but that seems somewhat below the noble historical calling of Napoleonic wargaming (said slightly tongue in cheek).  I invested in GMT’s Command and Colours Napoleonics for precisely this reason, as a simple wargaming guide to the campaigns and battles of the era.

I had spent a long evening putting stickers on the blocks for the CCN Austrian expansion (I have every CCN set and have gotten quite good at it), so I started at the beginning of the scenarios in this set with Wertingen.   The Battle of Wertingen, a town in Bavaria south of Augsburg, was the opening of the 1805 Ulm campaign.  It looks like a modestly sized fight ideal to recreate in 6mm.

Here’s the initial setup, mirroring the historical situation.  Murat and Lannes arrived with several divisions of light and heavy cavalry, and Oudinot’s grenadier division was coming up on the right.    This was bad news for the Austrian commander, von Auffenberg, who had been told to take his infantry division, with two small battalions of horse, and go scouting.   Given the rock/paper/scissors nature of the horse and musket period, running into a cavalry heavy opponent when all your guys are on foot is not a strong omen of success.  Here the Austrian infantry is divided into three wings - most are the large, five-block Austrian foot, which are one of the Austrian advantages in CCN, along with several unit of grenadiers.  The Austrians have a light cavalry regiment on their right, and a heavy (cuirassier) regiment in their rear centre.  Historically the Austrian guns were lighter than the French and so were outmatched in range by Murat’s horse artillery, but in CCN terms Foot Artillery is Foot Artillery so that unit is one of the stronger cards in the Austrian hand. 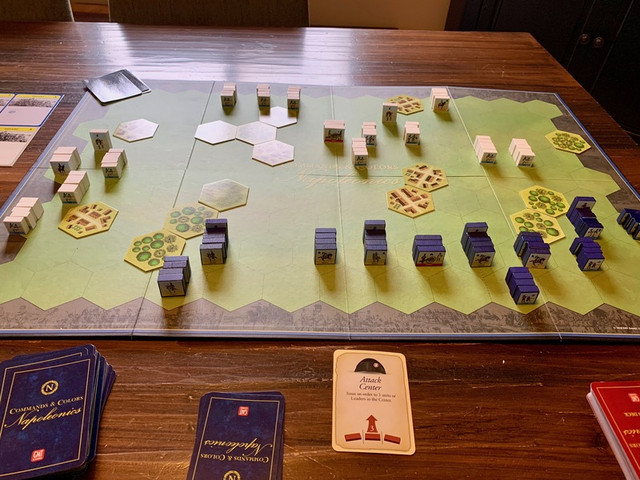 Speaking of cards, I was using the Tactician cards and the new Command deck which are in the CCN 5th edition.  This was my first outing with hem, and I found that they add much more period flavour and choice to the game.  There is a video on YouTube showing how the system for card-driven games devised by Stuka Joe can be used to make solo play in CCN more interesting, and I shall try that next time I play CCN.

The opening went as the battle started, with the French horse getting stuck into the Austrians and causing some grief.  However, the Austrian line infantry in CCN can form Battalion Mass, which ineffectively a square but does not require the Austrian player to sacrifice a command card for each unit in square.   The rule reflects the Austrian tactics’ favouring of the defensive, and requires the French player to use horse, horse artillery and infantry in Combined Arms attacks.

Mid game.  The Austrian light horse have caught the French horse artillery and obliterated it.   Also, the French have lost a general (two sabres came up on the casualty dice when his unit lost a block) so at mid game the Austrians are up 3-1. 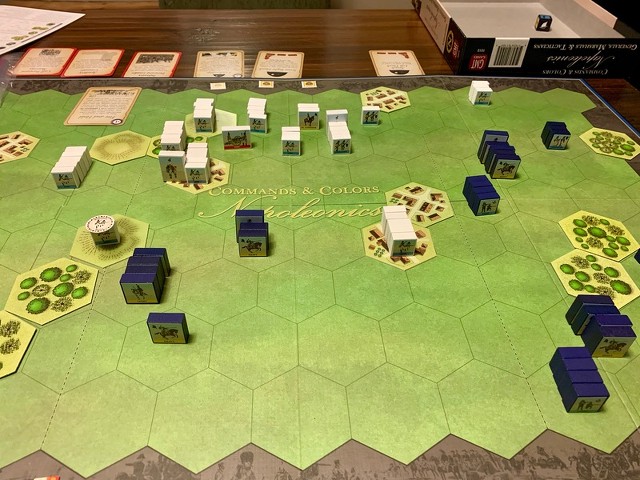 By the end game the tide was turning French as Oudinot’s grenadiers came up on the right.   The Austrian foot was in a protective crouch, using the defence advantages of the terrain, but a terrible run of cards left the defenders unable to answer the French weight moving to the right wing, and a series of persistent attacks, always with the terrible weight of French horse in reserve, took their toll.  Result, 5-4 French win, much closer than the actual battle, which augurs well for a more interesting miniatures game, perhaps. 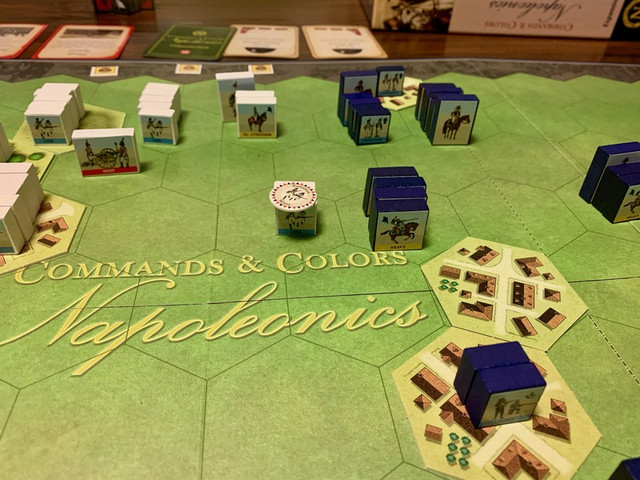 Next steps, do some background reading (I’m currently going through F.N. Maude’s book The Ulm Campaign 1805: Napoleon and the Defeat of the Austrian Army, which is an old chestnut but very readable and dead cheap as a Kindle version.   There’s also a very helpful entry on Wertingen in the invaluable Obscure Battles website which gives a detailed OOB for both sides that will be invaluable when I try to translate the battle to either General d’Armee (battalion level) or Blucher (brigade level).   One thing I noticed immediately in the OOB is how CCN fudges the numbers to create a more even contest:  the Austrians have a LOT of blocks for their 5500 men whereas the French should, one would think, have more blocks for their 20,000 men. It may look much more one-sided as a miniature battle.

However, CCN proved its worth as a useful overview of a battle and an incentive to learn the wider context (I am still very much a newbie at Napoleonic history), so hopefully by the end of April I’ll have tried Wertingen as a tabletop battle.