Napoleonic Thursday: Some Player Aides and Figures for General d'Armee

My first foray into General d’Armee by Too Fat Lardies/Reisswitz Press showed me that I needed some player aides to better manage some of the core mechanics, one of which is Aides de Camp.   When I served, an ADC was just a luckless very junior officer who got tasked with picking up a GOFO (General Officer/Flag Officer) at the airport, getting him to his guest quarters and turning his sheets down, and other sundry details, the indignity of which far outweighed the privilege of wearing the ADC’s aiguillette, the ceremonial length of braided cord worn on the shoulder of the dress uniform.

n Napoleonic battlefields, ADCs were ambitious and dashing young men of good families who rode around with orders and goads from the General commanding, like the unfortunate Lord Hay at Waterloo.   In Dave Brown’s GdA, ADCs, as we’ve seen, are the limited resources of time and attention to detail that allow the player to try and exercise _some_ control over the battlefield.   So how to represent them in 6mm?

I thought of simply ordering some officer figures to single base as ADCs, but decided against it, as it would take a while to get them and paint them (Baccus is swamped with orders at present and I have no idea if other companies like Adler are any more responsive) and I already have single-based command figures in the pipeline to represent brigade level commanders.   I then hit on the idea of trying my dubious artistic skills to sketch some caricatures, starting with Austrians, so I painted some discard sabots from multi-bases in white and then went to work with an HB pencil.  I found as I went that I was remembering some officers from my military service as I went, like the fellow with the big hair and the easy smile. 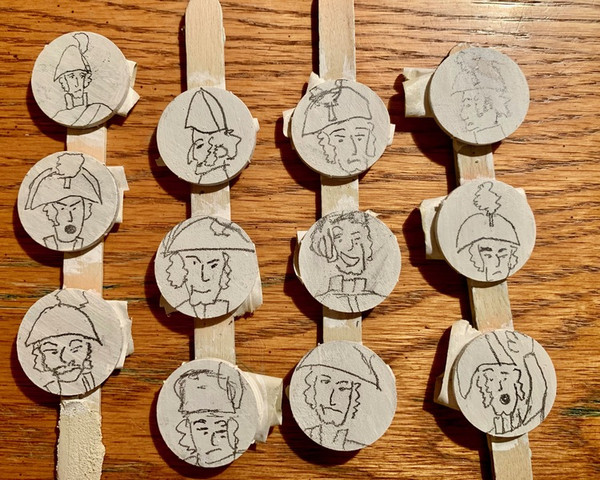 Final result.  Started colouring them with the grandkids’ pencil crayons, but the results were quite uneven and so I decided to revert to acrylic paints.   I’m quite happy with the final result.   Can’t wait to try them in my next game of GdA 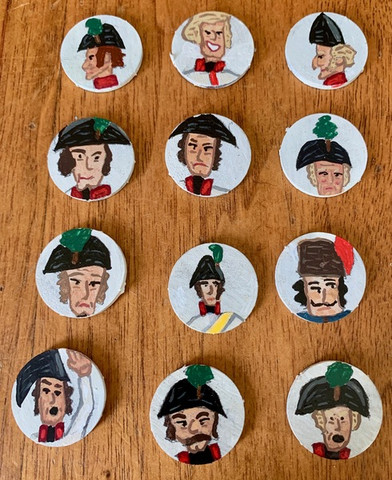 Also finished this week are some skirmish stands so I can try out the Skirmish rules in GdA.   I still need to do more Austrians, but I figure the French are more likely to deploy skirmishers than their opponents.  Some of the French figures (left) are by Baccus, painted by me, and some are from the collection I purchased.  The Austrians on the right were in that same purchased collection. 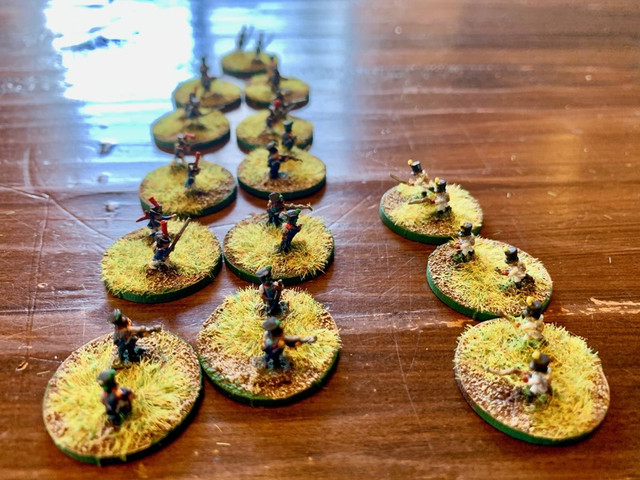 Finally, since I was on a basing jag, four brigade commanders for the French.   While I could also employ these figures as ADCs, I like my approach better. 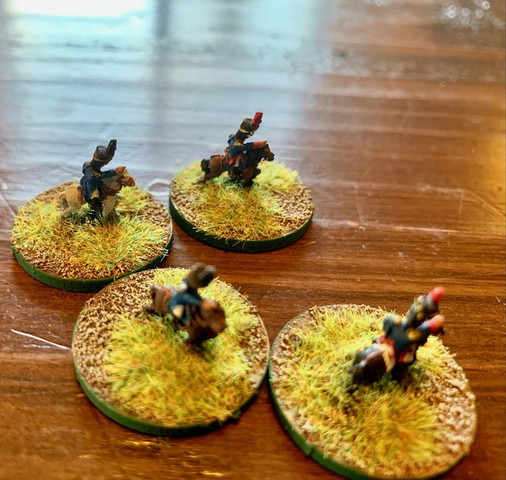 Hopefully we’ll see all this kit in action soon.    Thanks for looking and blessings to your brushes!