Kitten On The Keys, A Weekend Scrap, And Some Dragoon Goodness

It’s been rather hard to get any blogging (or painting, or writing, or housework, or …) done lately, thanks to our newest family member, Luigi, who is the most alpha-kitten I’ve ever met.  No shrinking violet, he wants your attention NOW, whatever you’re doing. 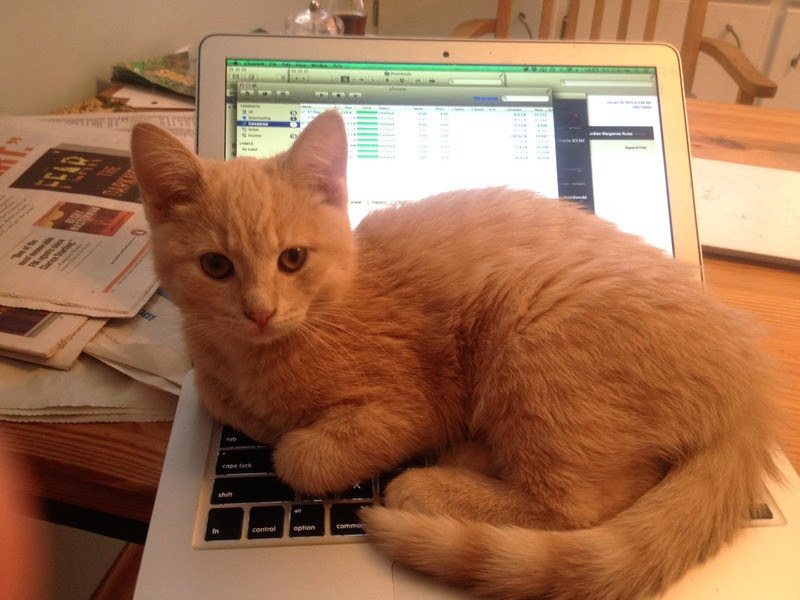 Saturday evening I did manage to get over to my friend James’ place for an evening scrap.  His friend Patrick kindly put on a very interesting interwar game between rival Chinese warlords, the Zhilli and the Fantien as I recall.  Since the Zhilli were attacking and had lots of men, I volunteered to lead them to glory.  Patrick used Paul Eaglestone’s World Aflame inter war rules, published by Osprey (now Bloomsbury, I guess).  I found these rules quick to learn, simple and playable.  Patrick added some chrome in the form of random events at the start of each turn - I think the rules for keeping track of ammunition and ammo resupply may have been his as well.   The attacker’s objective was to capture an enemy aerodrome and its three precious aircraft and western round eyes pilots.  My plan was to throw as many men as possible against the least anchored end of the enemy line and get in with the bayonet before they could shred me.  The plan worked surprisingly well, and led me to wonder if the rules underestimate the lethality of infantry weapons, especially the two HMGs that James used to enfilade me?   Or maybe his die rolling just sucked.

Here my infantry swarm the enemy trenches and put them to the cold steel.  Figures are all painted by Patrick, a mix of 20mm plastics from various companies with some head swaps.  They looked quite convincing from the nothing I know about interwar Chinese warlord armies.  Some of the fellows lying down at the top end of the brown swarm are from my unfortunate “bullet magnet” platoon whose job was to soak up the fire and let the other lads get stuck in.  Hard duty, but they did their job.  The trenches are also scratch built by Patrick and look rather good. 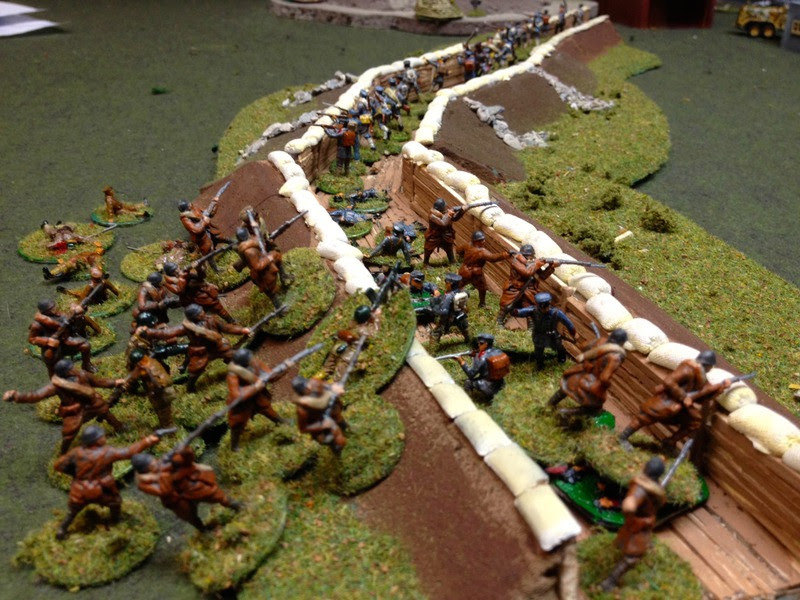 My glorious infantry advance across the bodies of James’ two reserve platoons, which were caught in the open by my mortars and shredded rather badly.  I quite like the red fish tank ornament across the road.  In the foreground is half of my armour support, an armoured car whose crew went a bit wobbly on me at first but got their act together eventually.  My other tank, a Renault, was driven off by a field gun whose crew were subsequently bayonetted after they refused to turn their coats, despite my generous offer of a dental plan (you join us and we don’t pull out your teeth with rusty pliers).  In the background is a CFB Suffield coffee mug doubling as an aerodrome water tank.  At this point James conceded, and his western pilots at the aerodrome happily agreed to fly for the Zhilli Air Force … they didn’t bally care who they dropped bombs on, as long as they got gold, girls, and white silk scarves.  Woof! 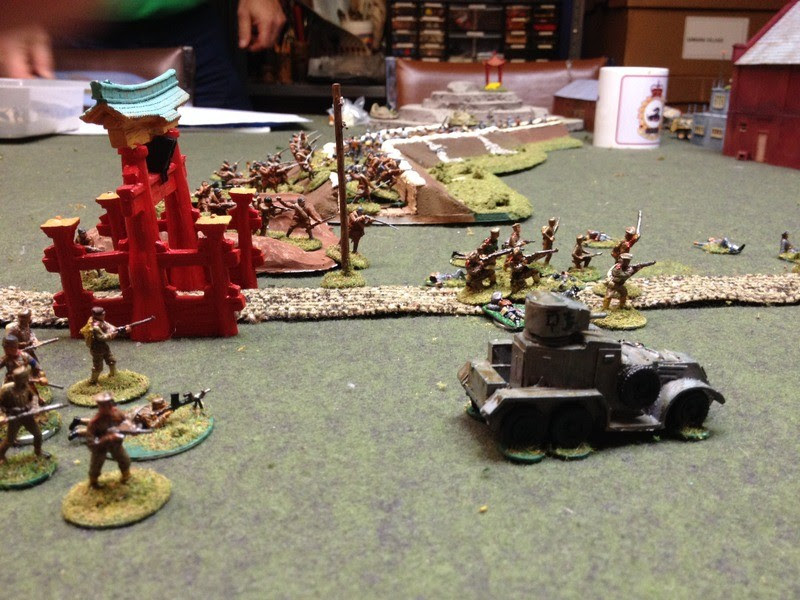 Changing the subject, here are the ten Front Rank SYW Russian dragoons I finished painting last week.  Participants in the Analogue Painting Challenge will already have seen them.  Here they are, borrowing their battlefield of MacGillicuddy’s Corners (still ongoing) for their class portrait. 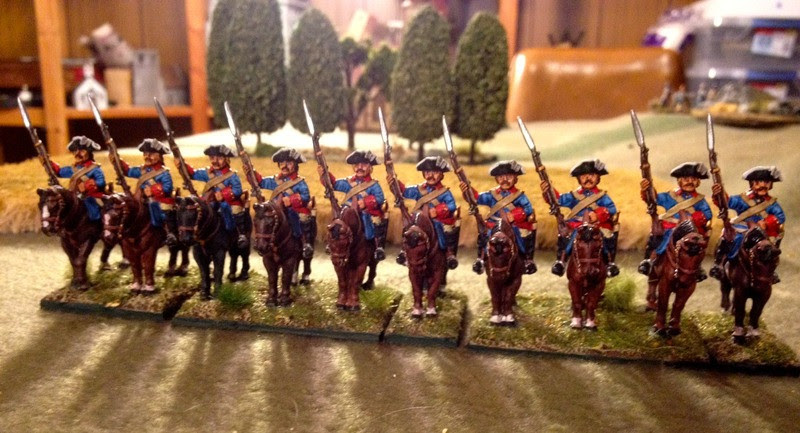 I bought about five pounds (weight, not currency) of unpainted SYW Russian cavalry figures off a fellow just before Christmas, including these ten Front Rank dragoons.  Most of the figures, as far as I can tell, are Front Rank,  which is fortunate for me as most of my Russian infantry are Front Rank as well.   To my mind FR is the gold standard for the period - I love the Foundry 28mm SYW Russians and the Crusader range looks interesting, but FR are big, burly sculpts with just a touch of Old School about the poses.   The only problem is that the range hasn’t been added to since I started collecting these figures in the 1990s. 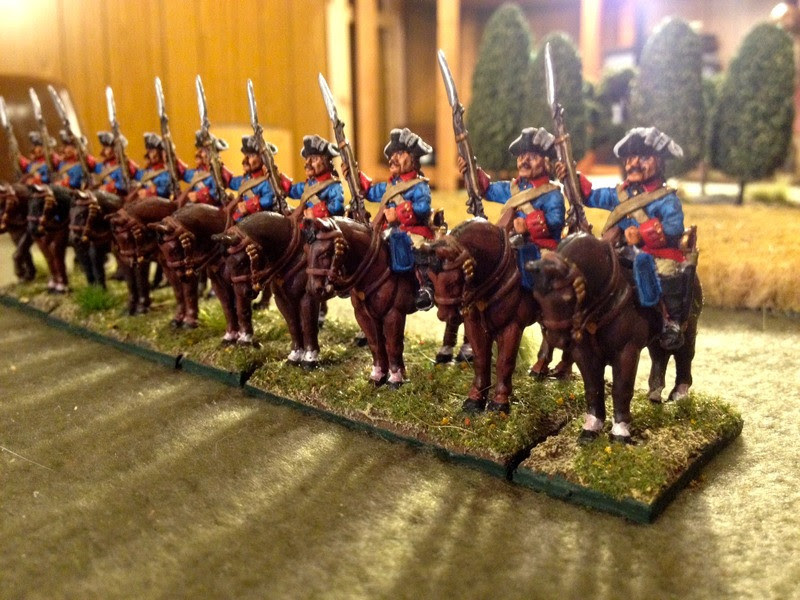 Sadly the figures I purchased did not include any command figures so I will have to remedy that at some point.  They’ll do for now.   I shall probably go with FR for the command figures, just to give this unit a uniform look.   I would like to get some of the Foundry dismounted Russian dragoons (the madness never ends)for skirmish gaming using the TFL Sharpe Practice rules, but that’s a longer-term project.  The decision to sculpt these fellows hiding their muskets rather than swords is interesting, and suggests that they are about to dismount - riding around with a musket in your hand doesn’t make a lot of sense, unless you’re going to use it as a lance.  And why do the muskets have fixed bayonets?

In the absence of a command stand, Sgt. Kropotkin will lead them out on patrol.

There’s something almost Zen-like about painting the same figure in the same uniform over and over again.  I found I had to parcel it out over time - red turn backs one night, buff cross belts the next, and so forth.  To speed the process, since I am a slow painter, I decided on only three basic colour schemes for the horses, and gave them all black tails and manes.  I tried to compensate by washing the first coat with Army Painter Strong Tone and then wet blending two lighter shades, so I am pleased with the quality of the horses, even if they lack variety. 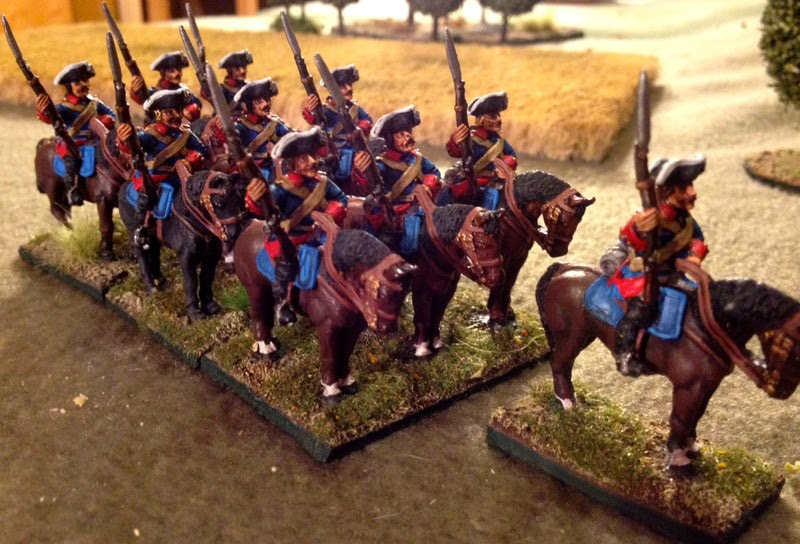 It helped my productivity too that the Russian Dragoon wears a simple uniform, no elaborate shabraques or lace and piping.  However, the cornflower blue coat with red trim gives a very bright and pleasing look. 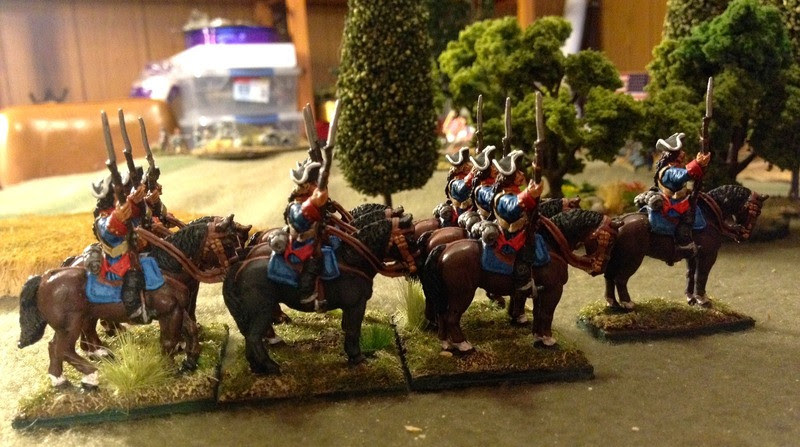 Powdered wigs or not?  I decided that powder might be all well and good for those fops in the Horse Grenadiers and Gardes aux Chevaux, but not for these hard working troopers out on the fringes of Mother Russia.  They all got their own hair colour, but curiously I decided to paint the queues in black.  Not sure what I was thinking there. 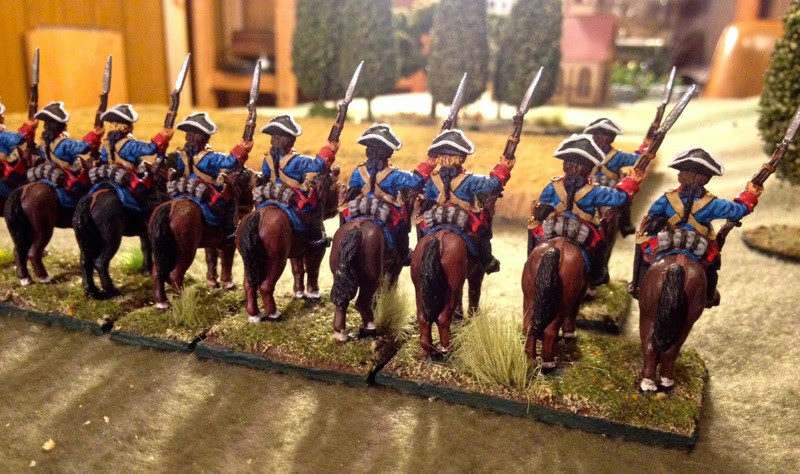 These fellows give my SYW Russians some badly needed cavalry capability.  The same lot I purchased also includes Horse Grenadiers, so I may try to get them done before the Challenge is over.

Thanks for looking.  Blessings to your brushes and die rolls!