(With apologies to Lytton Strachey).  These three figures were my entry in the Victorian Bonus Round for the Analogue Painting Challenge, in which there were some cracking good entires.

The figures are Architects of War, from their “Blown By The Breeze” set, part of their whimsical 28mm American UnCivil War line.  Two cheers for these figures, I would say.  They are amusing, and unusual, but somewhat lacking in detail, particularly the faces.   I certainly wouldn’t put them in the top tier of ACW figures (e.g., Perry Bros) but they are interesting 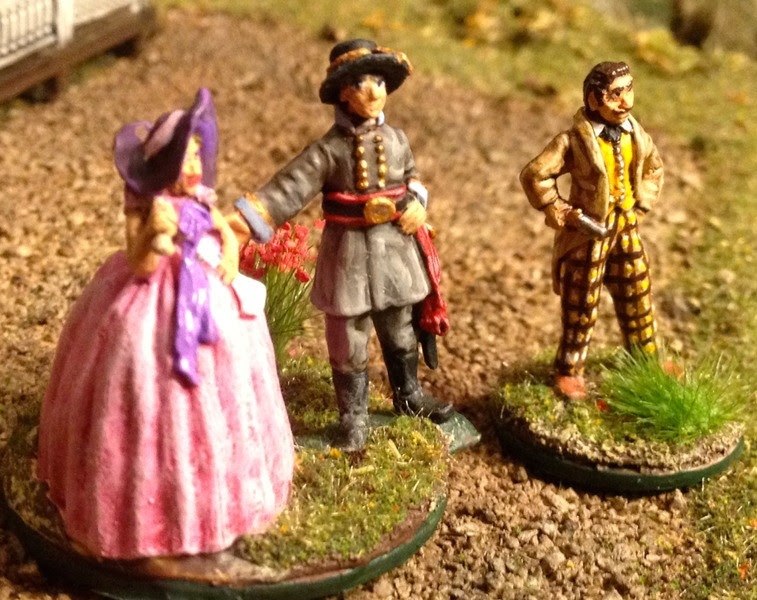 I did a bit of priming on the Friday night, and then spent most of last Saturday painting them.  It’s quite unusual for me to paint figures this quickly.  Usually I take days or weeks to paint figures, but I wanted to get figures in at least one of the Bonus Rounds.   Not my best work, but not my worst, either.  With the officer’s outstretched hand, it seemed fitting to base him together with the winsome young lady, even if she is wearing a tad too much makeup.  The civilian gentleman, who has a certain Rhett Butler / Clark Gable vibe to him, got a garish plaid pair of trousers and a fancy yellow waistcoat.  The small pistol or derringer gives him a touch of menace and may make him useful in skirmish games. “Frankly, Pink, I don’t give a darn, but I am going to shoot your clot of a boyfriend.”  Pity they don’t have a proper antebellum mansion to pose in front of. 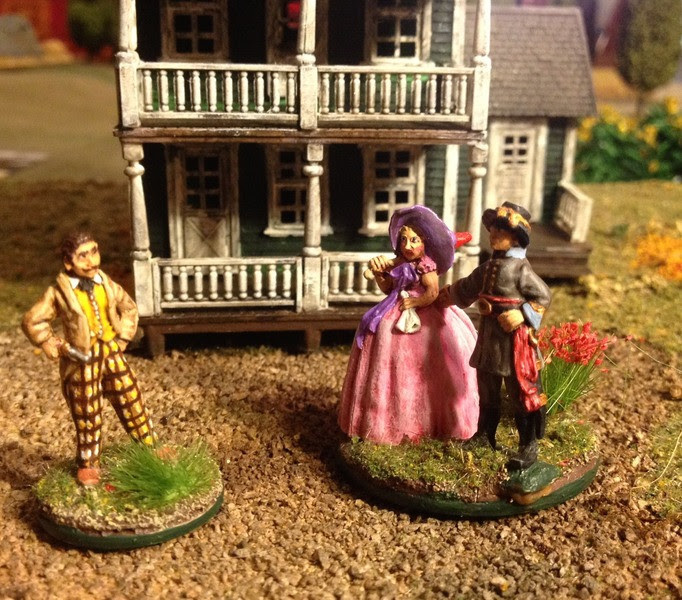 On the Challenge Facebook page some longwinded clot (ok, it may have been me) was wondering what exactly qualifies as “Victorian” in hobby terms?  Is it between 1820-1901, the reign of Queen Victoria, or is it generically 19th century?   Does it have to be British (which would make sense, in that one doesn’t hear much talk about “Victorian Germany” or “Victorian France”) and if so, could one extend it to the Colonies and even to America?   Certainly America in the Civil War period was Victorian in some respects, such as culture (think of the influence of Sir Walter Scott and similar novels on Southern culture and the cult of chivalry), fashions and morality.  It also went the other way.  Queen Victoria wept when she read Harriet Beecher Stowe’s Uncle Tom’s Cabin, and some historians think that book helped keep England from intervening in the Civil War.

At any rate, these figures weren’t chucked out of the Challenge by the black-hearted Curt, so I guess they are Victorian enough.