2014: Ten Highlights Of A Good If Scattered Year

Last year was a productive year, if lacking in any one dominant hobby theme for me.   After a very disruptive 2013, which saw a military posting and a move across country, it was good to have a year of stability while the Canadian Armed Forces wasted its money sending me to graduate school for 18 months.  I was able to commandeer a sizeable chunk of the basement in our rental house, with Mrs. Padre’s gracious consent, and while it was a tad dark and sometimes cold, it sufficed as a gaming and modelling space.

I’m not sure there was a dominant goal for me in 2014, so much as the determination to finish some projects that had been languishing half finished on my workbench for several years.   My academic workload was not crushing, and I was able to get some stuff done.  Thanks to Robert Avery, one of the indefatigable lights of the Too Fat Lardies community, I was able to participate in a painting challenge that simply gave each participant an incentive to get work done, without prizes or special recognition.   A gallery showing my painting accomplishments for 2014 is here, and I was quite chuffed to realize I got so much done in 2014, even if it was a little scattered.  Thank you for doing all that work, Robert, I will be participating this year as well.

For a final time, here is a summary of my hobby totals for 2014.

Time for a reset (except for the thesis pages, which will remain here as an incentive to get the next hundred done.  Please rag on me if you don’t see this number growing.)

Here are my top ten (mostly hobby) accomplishments in 2014

1) Learning how to tie a bow tie by hand.  Very useful skill to have for a chap.

2) Buying three used 6mm Napoleonic starter armies (French, Austrian and Russian).  A large box arrived on an apocalyptically wintry day beginning an on again/off again rebasing project that still continues.  It was the impetus to finish an initial order of Baccus figures made back in 2012, and to order some more scenery.  Getting this lot finished and augmenting the French from the tempting new line of Baccus French sculpts is a priority for 2015.

3) Making some significant progress on my 28mm Weird War Two project.  I now have enough figures to do some skirmishes, so I suppose I should start thinking of rules for werewolves, etc.  I bought the .PDF for 7TV’s Vlad’s Army and had a look at it.  It was cute and may have some useful ideas, but I’m thinking I will modify TFL’s Chain of Command rules.

4) Creating a small but useful 15mm Soviet WW2 army from scratch.   This was mostly thanks to the very affordable products from Plastic Soldier Company, augmented with a bit of lead.   I even had enough complete (10 T34s, almost a company of infantry and supports) to get a game in with them.   A minor goal for 2015 will be finishing off my unpainted infantry, and maybe augmenting them with some AT support and light armour for scouting. 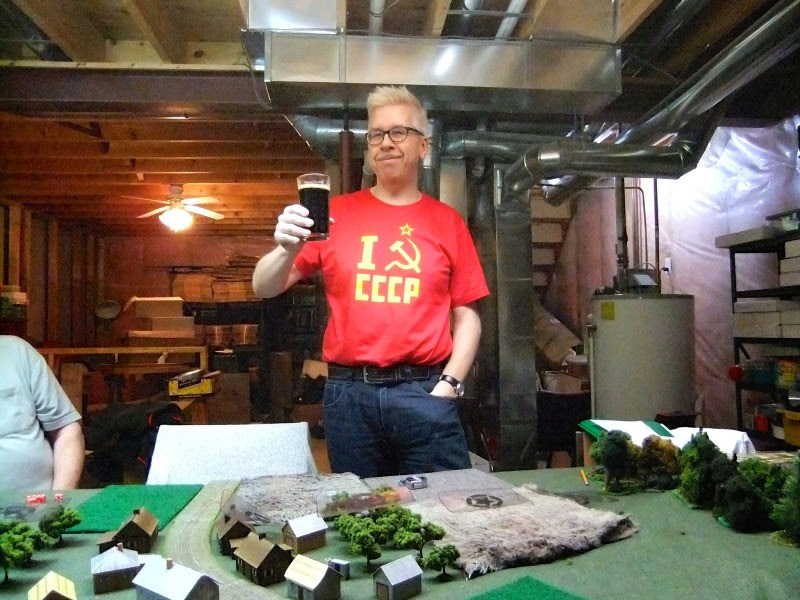 Toasting my Russian hordes as they advance to defend Turnipograd from the kitten-easting fascist hordes.

5) Actual gaming.  After three years posted out west, where I couldn’t find any regular miniature gaming opponents, it was a joy to come back to Ontario, within driving distance of some old friends, including my wargaming chum Rabbitman.  James is an old friend who thinks a lot like I do, and is a great pal to game with - nothing too serious, always lighthearted, but serious about the history.  Most of what we played in 2014 was Too Fat Lardies WW2 stuff, I Ain’t Been Shot Mom and Chain of Command.  We had some epic scraps, of which was my favourite was the Battle of Trois Lapins, in which Douggie Mercer and the North Novas foiled the plans of Dynamic Panther Man.  Sadly I will be posted fairly early in 2015, and we are both hoping it might be to the Chaplain School up the highway in Borden, which will make some gaming weekends doable.

7) More actual gaming.  One of my earliest loves is board gaming, and it was pleasant to get some, mostly solitaire games, in and to try some new titles.   My favourite new release of 2014 was GMT’s Rebel Raiders on the High Seas, an American Civil War strategic naval game that scratched a lot of itches for me.   I have several games I am looking forward to playing in 2015, including GMT’s Prussian Expansion for Command and Colours Napoleonics, their game on South Mountain which came out late in 2014,  and their Vietnam game, Fire in the Lake.  One of my happiest gaming memories for 2014 will be the Play By Blog Diplomacy Game that I ran online here.  It was a great joy to run and to introduce some folks to this venerable and vexing game, and I have some prize figures on my workbench to finish and send out in January.  I expect there will be another game offered here in 2015, once I get the next posting behind me and figure out how demanding my next job, whatever it may be, is.

8) Looking at Robert’s gallery, I was reminded that one theme in my work in 2014 was some progress on my 28mm SYW collection, which consists of Russians and Ottomans.  OK,most of the Ottoman figures are intended to be earlier than 18th century, but they’ll do.  I think my favourite figures from 2014 are the Spahi command group I completed back in May. 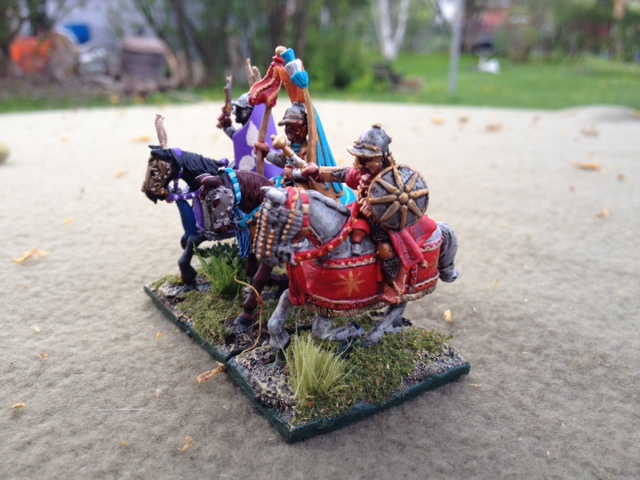 9) Madame Padre and I vacationed in Italy this summer.  Nothing much to do with wargaming, except that I saw Napoleon’s bathtub.

10) Last but not least, a highlight of 2014 for me is the wargaming blogging community, among which I can count friends from Dublin to Dusseldorf to Stockholm to Christchurch.  A number of small packages mailed and received the year attest to the strong bonds and extraordinary kindness of these wonderful folks.

A coming move this spring and a new job to learn will be disruptive, so I expect my activity here will diminish somewhat.   Here are some quick goals:

1) Finish rebasing all that 6mm Napoleonics and play some games with them.

2) Finish some Ottoman Spahis and some Russian SYW horse I bought off a chap late last year.

3) Paint some wonderful ACW Iron Brigade figures from FG MiniZ Forgotten and Glorious - I don’t know why I haven’t gotten these done already.

4) Putter away at the Weird War Project.

5) Round out my 15mm WW2 Soviets and play Battlegroup Kursk with them.

6) Play some more games, preferably with new friends I make in my next posting.

Thank you for your comments and support of this blog in 2014.   There are so many blogs I visit, and so many more that I wish I had time to visit, and I know that following your exploits and enthusiasms will make 2015 a pleasant and interesting year.

Blessings to your brushes and die rolls!