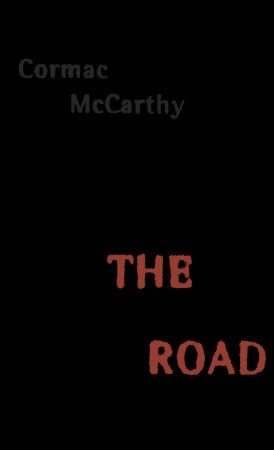 Something in us dreams of our own destruction. Perhaps it is the spirit of our age, the pessimism that seeps into us with the news that resources are running out, that the world is dying and we are sickening, that the terrorists will get us. Esquire magazine's review said that it is "exactly what a book about our future should be like" I don't know if The Road is a product of this pessimism. Lesser books I've read, like Max Brook's World War Z: An Oral History of the Zombie Wars, actively trade on our media-implanted fears that we are living in an end-time with no saving rapture to hope for. Certainly that's how the publishers view it. I was bemused to find in the bibliographical data that it is cross-referenced with books about 3) Regression (Civilisation) - Fiction and 4. Survival skills - Fiction. Wow - I had no idea that Regression (Civilisation) was a legitimate sub-genre in its own right - lots of cheery reading there, to be sure.

Perhaps this labeling would amuse McCarthy, who I sense is too smart a writer to acknowledge that he is naming the fears of our own day. Like Samuel Beckett, he wants to peel as way as many layers of our lives as possible to find the core things that keep us alive. Maybe McCarthy is more interested in a timeless existentialism than the threats lurking in today's headlines, but one thing is for sure, this book scared the pants off me regardless. Look up reviews for The Road and you'll find words like "harrowing" and "unspeakable" used freely, and aptly, I would say.

I love McCarthy, something I say on the strength of what I've read of him so far, All the Pretty Horses, the first volume of his novels set on the Texas-Mexico border. McCarthy's prose is both sparing and poetic, his landscapes harsh and unforgiving, his characters are tough, alienated, and are driven by moral codes that don't always serve them well in the world they move in.

The backstory of The Road is only hinted at. There was a nuclear war, and the boy was born the night after the bombs fell and as the cities burned. This boy is the key to the novel. He has miraculously survived years of nuclear winter, starvation, and the descent of America into savage tribes of cannibals. There is an innate goodness to the boy, his concern that he and his father are "the good guys", and his desire to help the few unfortunates they meet on the way. The father is convinced that the boy is "the only thing godspoke left in the world (if God didnt speak in the boy he never spoke at all)" and therefore his goal is to save the boy for an unknown future in a dead world. The boy's mother on the other hand lost all faith that life had any purpose, even that they were alive, and took her life.

There is a vortex at the heart of this book, a kind of black hole of nullity that rips away everythign - names of states and months, creeds and debates, memories, identities, hope. The boy's mother speaks of it in a remembered conversation before her suicide: "As for me my only hope is for eternal nothingness and I hope for it with all my heart". The man resists this vision, but it is as if he can only carry a few scraps of memory and humanity into a hopeless future: "Make a list. Recite a litany. Remember". Within this conflict of nothingness versus tattered hope is a second tension, the boy's innocent goodness, as evidenced by his desire to help the few other unfortunates they encounter, and the man's grim and survival-focused selfishness.

Amidst the horrors and challenges of this book is the sheer pleasure of McCarthy's command of language. Scrabble-players will feast on the richness of language; it is as if McCarthy is deliberately and routinely confronting us with unknown, half-understood words, perplexing the reader and reinforcing the sense of a world turned alien and meaningless. I offer a short list of examples:

"The cold illucid world"
"He descended into a gryke in the stone"
"They were discalced to a man like pilgrims of some common order for their shoes were long since stolen."

It's tempting to ask what sort of hope McCarthy offers in this bleak future. To be sure there is goodness. The boy has learned from his father that they are "the good guys", which makes them a distinct minority in this cannibal-haunted landscape. What future there is for goodness, hope, or the place of God is for the reader to decide. For myself, I'm haunted by the elegiac final paragraph, a look back to a pre-lapsarian time when the earth was rich and beautiful, "Of a thing which could not be put back. Or be made right again", and I can't help but think that this book's future stands perilously close to our present.