Lard Coffins, or Walter Gets His Wings

Last Saturday saw another gathering in my church hall for another gaming day, a semi-reglar series of events christened by the participants as "AngliCONs". For Anglicon III, Keith Burnett, one of the most industrious gamers I know, offered a World War One flying battle featuring the "Algernon Pulls It Off" rules published by club favourites, Too Fat Lardies.

Like all TFL card games, this one is card-driven, so their is a high degree of randomness, offset by the fact that experienced pilots have significantly better chances to maneuvere, evade and shoot than their inexperienced colleagues. The most hapless of all are novice pilots, or "sprogs", who are like the thousands of turtles hatched on the sand, one or whom might grow to be adults, while the rest become fodder for predators.


For aircraft, Keith had purchased a hot ticket on the miniatures market at the momemt, the pre-painted 1/144th scale Wings of War models. With some homemade dowel altitude extenders, and a green cloth representing the fields of France far below, we were good to go.

Here's what we it looked like as we flew into battle: 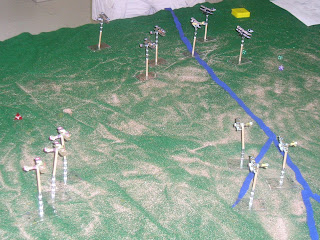 Leading the charge was the English ace Capt. "Corky" Manto in his Sopwith Camel. My wing commander was Mike "Le Gros Bete" Barratt in his Spade; I was a veteran pilot but not an ace, while Mike was a junior ace. A flight of three Fokker triplanes was coming at us, while the English were tangling with three Albatros scouts. I figured my chances of survival were pretty good as long as Mike stayed close to me. Using the Spads' height advantage, we got behind the Triplanes and I broke formation to turn right onto their tails, only to be dismayed when Mike and his otherwingman turned left to help the English take on the Albatros flight. Mon dieu!

"Corky" was enraged that the bloody Frogs were trying to poach his kills and made his displeasure felt, rapidly sending an Albatross flying towards Paris with a badly wounded pilot who kept repeating "Must not black out" in German. Meanwhile, Dan Hutter as the dreaded Black Claw (his first choice of a nickname, "The Black Vegetable", was vetoed by his mechanic) shot down the junior Camel pilot.

Every pilot wants to earn his wings. We had a set of wings from our Christmas pageant in a closet nearby, so I declared that these would be given to the first player who would get himself posted to a heavenly billet. This unfortunate honour went to Leutnant Walter Von Winker, an Albatross pilot who fell to Corky Manto's guns. Here is Walter as he flits off to heaven: 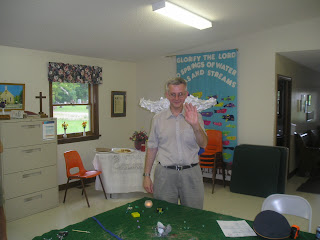 Meanwhile, in a fine moment of oedipal conflict, I maneuvered my ungainly Spad onto the tail of my son John's triplane and sprayed lead in a liberal fashion, barely putting a hole or two into his fabric. This would be the sum total of the damage I did that day. John veered off, using his rotary engine's right torque to break my tail, and headed off to help the doomed Walter. Sadly, John would fall to the guns of "Corky" Manto, his second kill of the day. Behind me I could hear the cursing of Barry "Boche" Holden as he tried in vain to get a break in the cards that would allow him to shoot me. Poor Barry never managed to cause any damage and fly home in a Fokker Huff.

The rest of the battle was confusing, as I had little time to follow it. The Black Claw finishhd off his Frog, then landed, and appeared to have a liason with a French milkmaid. Mike "Le Gros" Barratt flew around in circles overhead, telling the German to come out from under the haystack and fight like a man, but the two never came to blows and the Claw flew off safely, his mysterious business concluded. A number of sprogs crashed, unable to recover from tricky maneuveres which they rashly attempted. "Corky" Manto flew home so that he and the chaps in the Mess could talk about how spiffing he was. Gun empty after blasting away and not hitting a sausage, I opened up my throttle, climbed to my ceiling, and flew home, leaving "Boche" Holden shaking his fist at me in vain. Here was the landscape after we left it littered with broken aircraft and bleeding pilots:

Keith did a great job of navigating us through a new set of rules, although the Too Fat Lardies use a core set of mechanics that seem to show up in all their rules. Keith had the clever idea of not telling us how much ammunition we had remaining, so Corky Manto was deprived of the pleasure of his third kill when his gun went dry with a one second burst when he expected eight seconds of hot lead. In theory the players could have kept track of their ammo but we didn't and who really would in a dogfight? Richard Clarke and the chaps on his listerserver were very gracious about answering our questions after the game, and I am sure that we'll be flying lard coffins again fairly soon. Two thumbs up for Algernon Pulls It Off, and predictions that more of us will be getting little planes to go with what my wife calls our "little men".