Some Ancients Gaming: Clash of Spears at the Club

Hello friends and welcome back to this semi-moribund blog.  April was a bit of a write-off for me, what with the Easter season (a busy time for a wargaming vicar) and then winding down my contract at All Saints, King City, which ended on 1 May.   Since then I’m not sure if I’m retired or just between jobs.  Next week I have a chat with my bishop, who will try to tempt me into another gig of interim ministry, so May has been a bit of a rest, getting the garden ready, and some gaming.

Recently I was at what passes for our local club in Barrie, Sir Games-a-lot, playing Clash of Spears with my friend Charles.  CoS as I’ve mentioned here before is currently getting a lot of play, it’s a skirmish level ancients game that might be compared to TFL’s Infamy, Infamy.  In this recent game, I took my freshly painted Victrix Germans and Charles took a Punic (!?) force.   Not sure what they were doing in the forests of Germania, but my guys wanted to send them home.  In this scenario, both sides are competing to control the green/white star tokens. 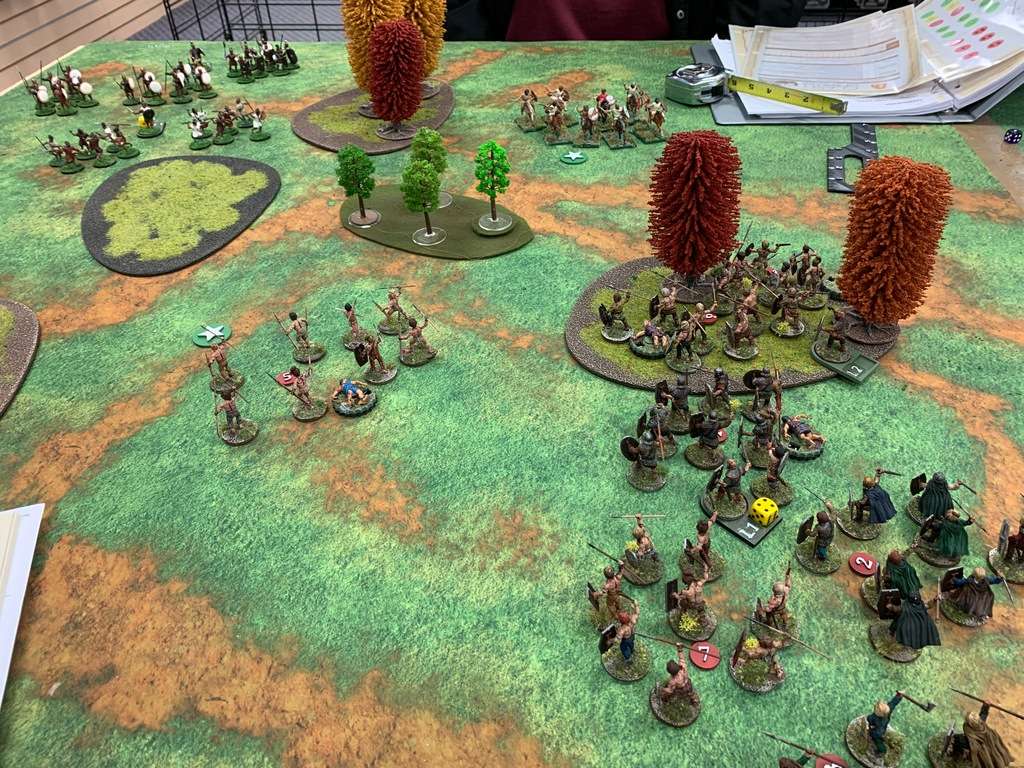 I was more fortunate in the terrain selection this time, giving Charles fewer opportunities to get all his troops into action.  Here a swamp on the left and woods on the right allow me to defeat one of his light units early on.    I quickly learned that while my German barbarians come be had cheaply on the points list, thy aren’t much good without sufficient leaders.  I had seven units and only two leaders, so six command points between them each turn, which wasn’t enough to take advantage of my numbers. 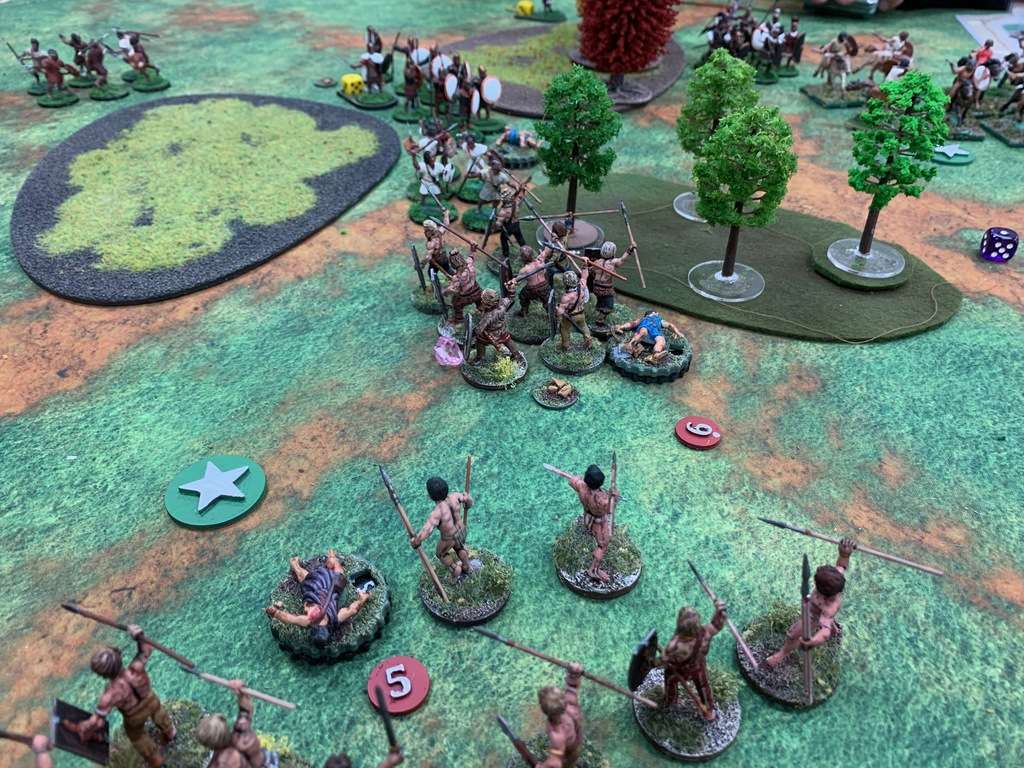 Charles’ auxiliaries don’t fare much better vs my raging tribesmen.  The dead chap on the dial marker is used to indicate fatigue.  Units acquire fatigue quickly in battle, and unless thy can be pulled out of the battle line for a breather while a fresh unit steps in, things go badly quickly. 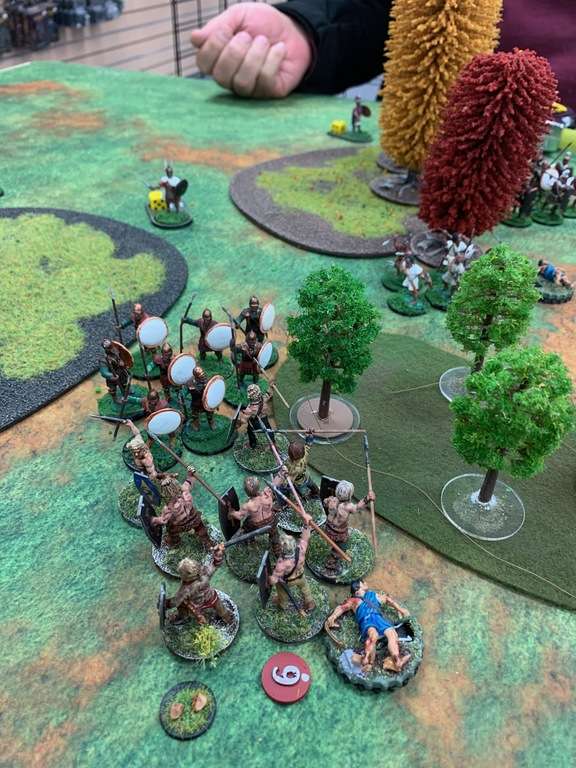 I quickly learned that light horse archers can be deadly.  I pushed a unit forward in the wide open area on the right of the battlefield, the horse archers came up a half move and shredded the lightly armoured barbarians, then rode back, then did it again!   I have invested in some Victrix Gaulish horse to stand in as mounted Germans, not plentiful on the CoS Germanic list (found in their Clash of Eagles supplement for the early Empire era) but there if you want them. 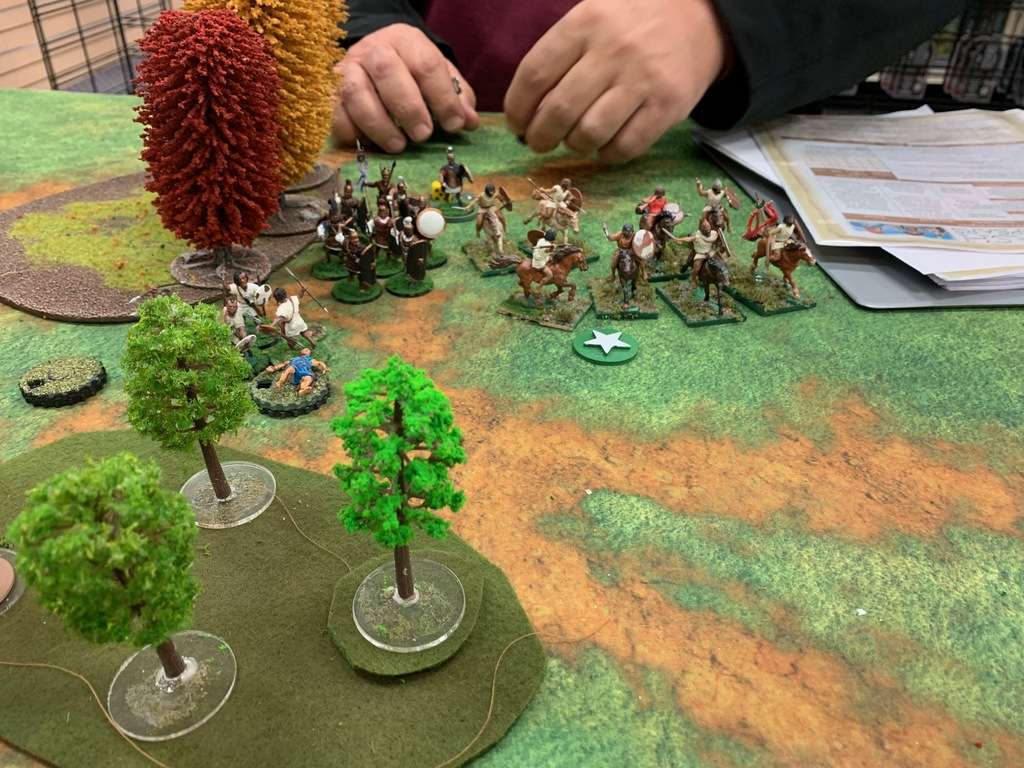 Final stage of the fight.   Both of us ended controlling an objective marker, but lacked the strength to take the second.   With those deadly light horse supporting Charles’ heavily armoured foot, I decided to split the honours. 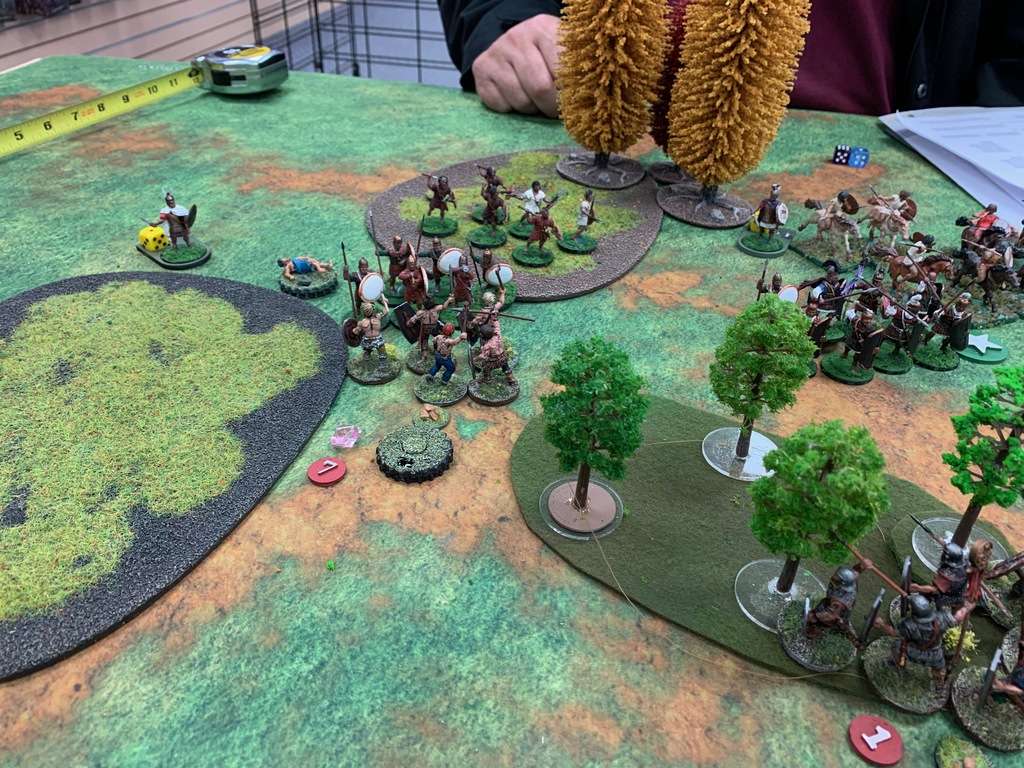 As someone once said, is furies Romae, Romano vivid more, or to translate, when the other guys are playing ancients, play ancients also.   I once swore that I’d never take up ancients gaming, and had a lot of fun with CoS, so I’ve taken one step into the 28mm world, and have some Victrix early imperial romans on order, on the theory that one should always have two armies for solitaire gaming.

I also have some adventures in smaller scale ancients gaming to report on, so my next post will describe how I discovered and enjoyed DBA.

Cheers and blessings to your die rolls,