Further Down the DBA Rabbit Hole: Chariot-era Battle With Howard

I’m picking up the ancients gaming theme of my last post today, which I finished by saying that I’ve been enjoying my discovery of small-scale ancients and learning to play DBA (De Bellis Antiquitatis), Phil Barker's small battles rules from WRG that have been around longer than many games today have been alive.  I’ve been aware of DBA for years, and was familiar with the usual potted descriptions - “like chess, very stylized, ok if you like fast games, it’s about how many sixes you can rol, etcl”.  I wasn’t prepared for just how entertaining it could be.

Charles, one of the regulars at the Barrie group, has played it for years and was kind enough to introduce me to it, using several of his well-used and much loved armies.  I found that I enjoyed it’s almost zen-like simplicity.  With just twelve units, a few pages of simple yet subtle rules, and sudden death if I lose four units, DBA provides interesting tactical challenges and a clear cut result in an hour.  It’s also a fairly simply gateway into what is, for me, complicated and unfamiliar world of ancients gaming.   Pick a period, pick an army (or borrow one, I’ve found that veteran DBA players have lots of armies and are very generous with them), learn the basic troop types, paint between 30 to 40 figures, and you have an army!

Last Thursday I was fortunate enough to play a game with an experienced player, Howard Tulloch, who has organized DBA tournaments in the southern Ontario area for years.  Knowing that I am interested in the biblical period, he brought two chariot-era armies, Cypriot-Phoenician (1/35) and Kushite Egyptian (1/46), both beautifully painted.    I took the Phoenicans, since I have an earlier Sea Peoples army on order from Essex and wanted to see how the Phoenicians as descendants of the Sea Peoples handled.

I had a bad run of luck with the terrain setup.   Howard placed two dunes in my deployment area, which along with the sea coast really hemmed me in before I could get out the gate.   The only saving grace for me was that, as a Littoral army, the Phoenicians can deploy up to three elements anywhere along the water board edge.  I chose to place my two best Auxiliary infantry units in the middle of the table on the left edge, as a bit of a check on the Egyptians to keep them from swarming me as I emerged from between the two dunes. 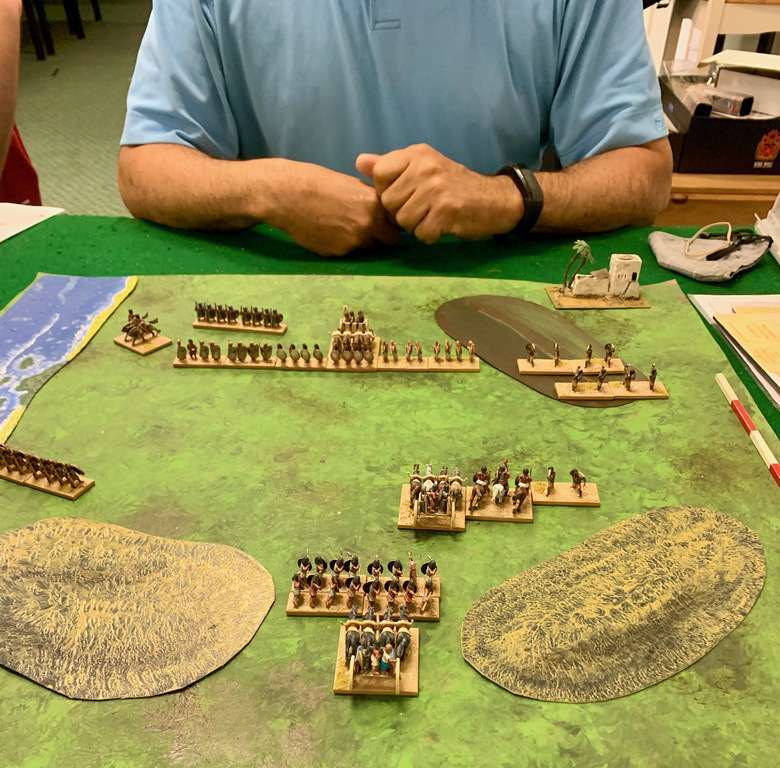 Initial rounds saw my getting a lucky victory over the Egyptian light cavalry, but then Howard’s royal archers shot my own cavalry off their horses, tying the score at 1 to 1.    Our psiloi (light infantry) faced off on the hill to the right, but never actually exchanged blows, while Howard checked my Aux infantry with two stands of his own.    One of the things I’ve learned about DBA thus far is that when the odds are basically even, as they were on our flanks, battles can easily go either way and leave one in the hole on the lost unit count.  Better to seek a win where you can mass more units against you opponent and thus stack the odds in you favour. 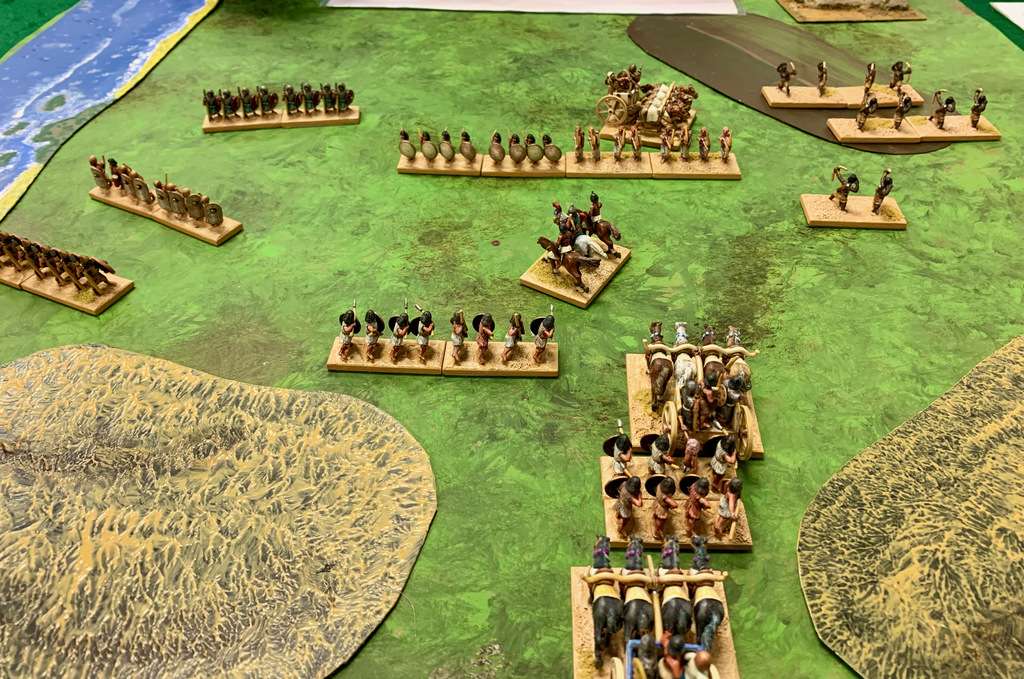 Which was exactly what happened.  In the centre left, you can see two units from each side facing in a kind of “Z” shape, with each side having a unit on the other’s flanks, known as “closing the door” in DBA terms.    Once a unit is flanked, if it loses a combat and has to retreat, it is destroyed.   Thus, whoever would win this fight was almost certain to win the game, and it stayed locked that way for FOUR TURNS, with both of us rolling the same numbers to tie, forcing the battle into extra rounds.  Finally I was able to get my chariots into Howard’s archers, and with two lucky die rolls I managed a 4-1 victory, though it could easily have gone either way.

Moved up in the painting queue as a result of these games is a clutch of 15mm figures, which when finished should allow me to field an Early Hebrew or Syro-Canaanite army for DBA.  I was originally intending these figures for an ADLG army, but I think I’ll go the DBA route to get armies on the table sooner, which makes sense, as there are DBA players to hand and no one in our group plays ADLG.

For extra ancients inspiration, Joy and I visited the Royal Ontario Museum yesterday, where we had the classics section to ourselves for a brief while before the parents and kids arrived.  Here’s a lovely Corinthian style helmet for you to admire, supposedly found at Marathon and dating to about 500 BC, though there is some uncertainty about its provenance . 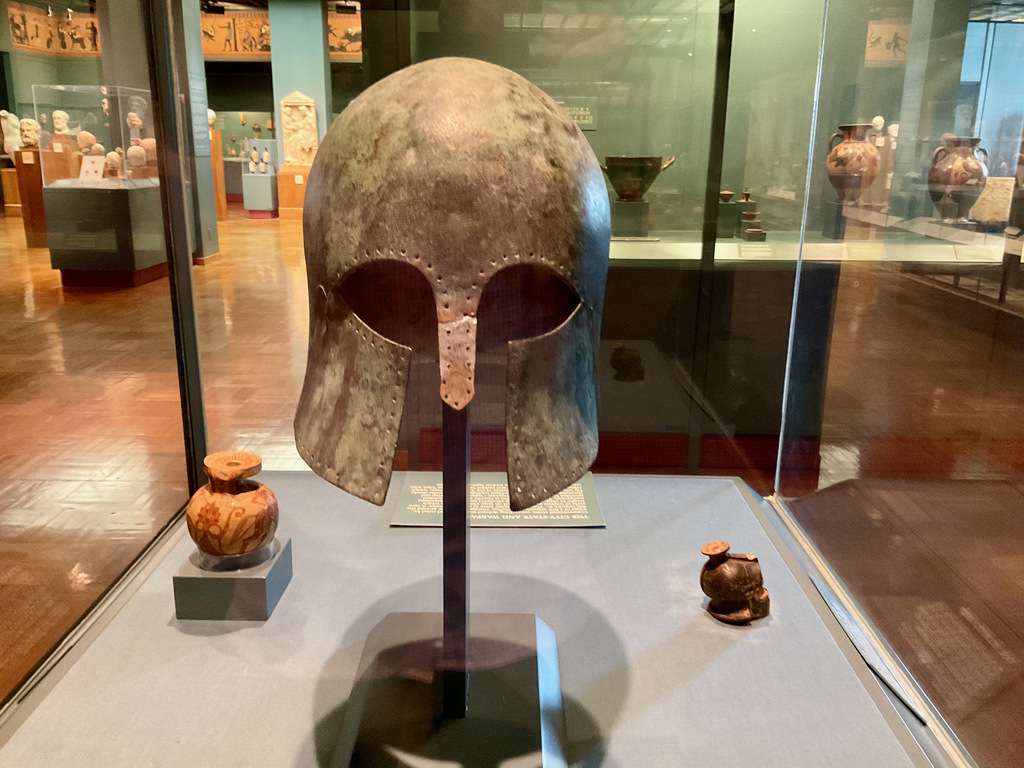