Napoleonic wargaming seems to require vast quantities of books, which is probably not different from any gaming any other period, but even when it comes to uniform guides, it seems to help to be a bit of a bibliophile.

I found Hayornthwaite’s Osprey book on Napoleon’s Line Infantry (1983) on a used book site and was happy to buy it because it several years ago when I started in 6mm Naps I found the colour plates online, downloaded them, and happily used them as a painting guide.   I have always felt guilty about that little digital theft (mea maxima culpa!) and so jumped at the chance to atone for my sins.

Re-reading it, I was struck by how dark the blue of these uniforms appears in the plates, as dark as the Indigo worn by Union troops in the American Civil War.   Painting 6mm, I usually go a share brighter, just for visual effect. 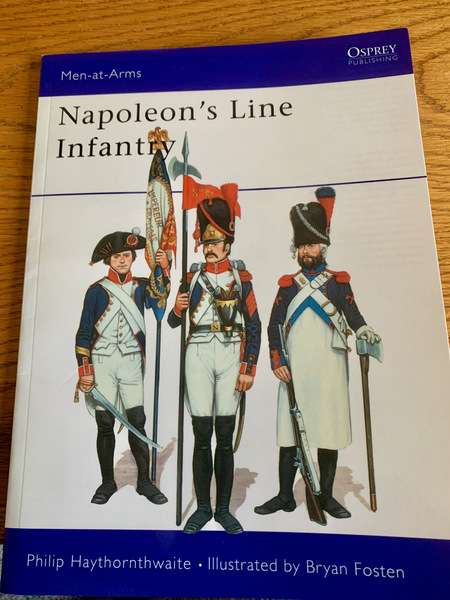 Another OOP Osprey title arrived all the way from a used bookstore in France!  A quick rant on Osprey - I’m puzzled why all of their OOP titles are not available digitally, and why of those that are, some can be found in Kindle format via Amazon, while those digital versions sold directly from the Osprey website are not Kindle-compatible and have to be read with another application (in my case, the Books app on my Mac Book).   Very perplexing. 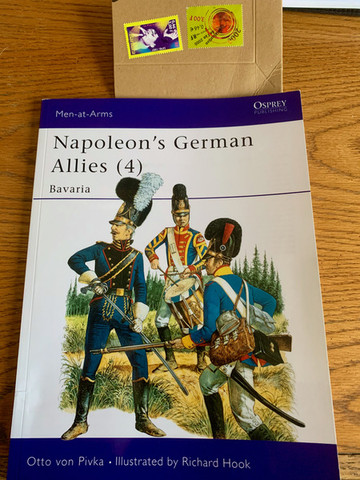 At any rate, I have several bags of lovely 6mm Bavarians from Baccus awaiting my brush, and wanted something more reliable than just my vague memory of cornflower blue uniforms and black hats.  Bavarians are a great force because they make useful allies for the French up to 1813 (the Austrians hated them) and then switch sides, so a useful force.

This Osprey book is quite good, and the plates by Richard Hook are full of animation and humour - a soldier cuddling a liberated piglet, a dragoon on horseback having an animated conversation with a young woman in a window, and a cheerful Colonel with a glass of schnapps.    All very different from the stark realism and mannequin postures of Bryan Fosten’s please in the above book.

Speaking of Bavarians, the painted 28mm army on the VonPeter Himself website are simply luscious, and really, the entire site is worth regular visits for Napoleonics done well in the big scale. Finally in the book roundup, this arrived in the post from the UK recently in a remarkable display of generosity, a good illustration of what young Conrad Kinch likes to call “the Freemasonry of the hobby”.   Someone in the UK, one of my Twitter mutual follows, knew that I was looking for a copy of this book, Hayornthwaite’s one-stop shop for all things Napoleonic, which has been sadly missing for my library.   The owner was quite happy to mail it to me free of charge as long as I gave it a good home, so I am happy to pay the favour forward and am also painting two figures for this person’s collection.   Such a grand hobby that it inspires so many friendships, most of which are between people who have not yet met in the flesh!

As proof of this book’s usefulness, in the entry on Bavaria, we learn that the American-born Benjamin Thompson, the Graf von Mumford, after  serving the Elector of Bavaria as War Minister, “retired to pursue a brief marriage with the wife of the guillotined chemist Lavoisier and two live in seclusion in Paris, where his lasting achievement was the invention of the coffee percolator!”  Feel free to drop this tidbit when you return to the post-Covid cocktail party circuit, and don’t thank me, thank Hayornthwaite.

My next Napoleonic projects are to finish some 6mm Baccus Austrian Uhlans, draw up the unit labels for the Battle of Wertingen, and get that fight on the table as a way of visiting the Dave Brown General d’Armee rules.  What in the way of Napoleonics are you working on?