Just putting a few words of praise here for Five Men In Normandy, 30 Cal Edition, a cheap and cheerful set of skirmish rules by Nordic Weasl for very low (squad/section) level infantry actions in WW2.   I’ve been following @weasalnordic on Twitter for a while, he runs a solo game design business and is quite prolific.  I was originally interested in his SF rules but 5 Men was cheap and looked like just the thing for a simple game that was easy on the brain.

Here five Canadians are tasked with securing a ruined building to use as an OP post.  They have one sniper rifle, one Bren, one rifleman with an SMLE, a corporal with a Sten, and an officer with a pistol.   The ruined building is held by four Germans, a two man LMG team, a rifleman, and an NCO with an SMG.  All weapons randomly assigned. 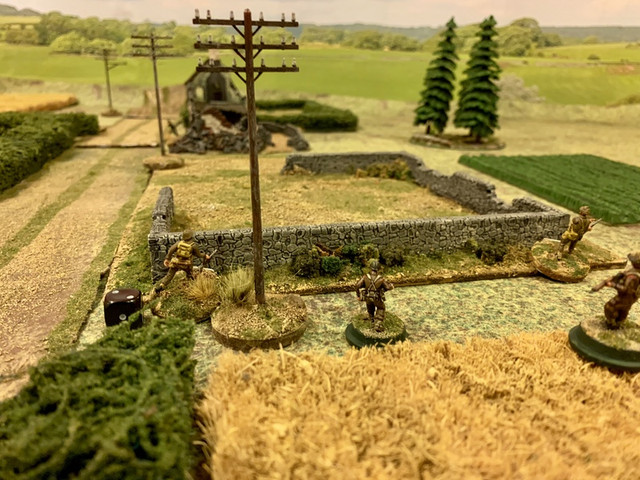 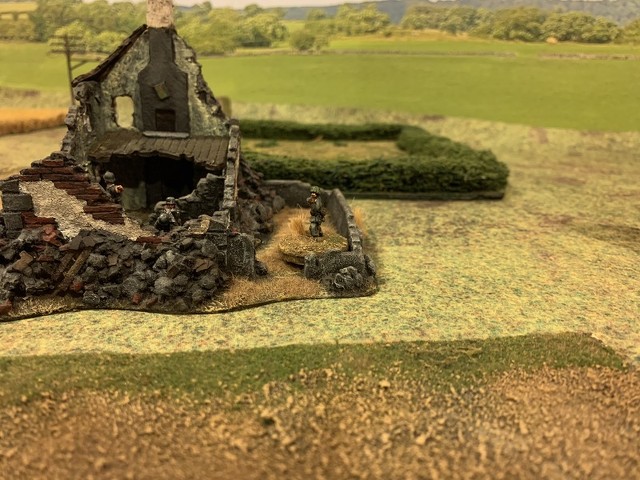 The Canadians got a map as a random asset, so they were able to sneak into initial positions.  From there, it was fairly straightforward real world tactics, with the sniper and the Bren keeping heads down while the thee others moved into grenade range.  The Germans took two casualties and the survivors elected to slip away.

You can find these rules in Nordic Weasal’s section of Wargames Vault to purchase as a PDF download.   As I said, these are very simple, D6 driven rules, ideal for very small actions with a cinematic feel.   No armour or offboard infantry, just a few guys running around with infantry weapons. You could teach them to someone in less than five minutes, and I could see my grandkids giving them a go as they get a few years older.  If you want complexity, then look to a system like TFL’s Chain of Command.

It was also fun to get out my 20mm toys after a year in their boxes and to try out some photos against my new model railroad backdrop, which probably needs its own post.