On To Paris! By Compass Games Turns 1 and 2

Currently on the Mad Padre’s hex and counter table I have open On To Paris (OTP), an operational/strategic treatment of the Franco-Prussian war, designed by Milan Becvar for Compass Games.  I understand the game system is ported over from an American Civil War publication from Victory Games, which I’ve never played.   I gather OTP has had a complicated production history, and there are some noted graphics issues which others have noted - in brief, I find the board and the charts hard to read because of strange font and colour choices, but I’ll leave that for now.

Here’s the back of the box to give you a sense of the game’s look. 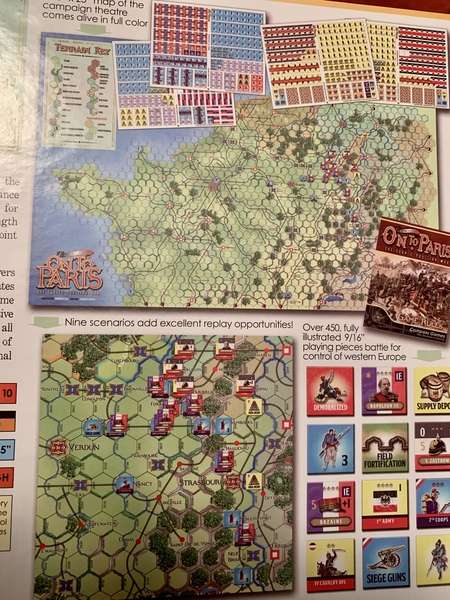 OTP is a bit of a head-scratcher for a bear of little brain like myself, but I’m slowly working it out.  The building blocks of each side are infantry and cavalry strength points.   Infantry can be left as SPs for duties like garrisoning fortress, but are best organized into corps which can be attached to armies for maximum flexibility.  Cavalry are organized into divisions which can likewise be attached to armies.

The turn sequence is a series of random impulses in which each side uses dice-driven random allocations of Command and Initiative Points to organize and reinforce, maneuver, and fight.   Amies have some reactive capability so the non-phasing player can sometimes move to counter the phasing player’s operations, depending on things like commander abilities, which gives it a fairly fluid feel.

Prussian armies are somewhat better at command and control than the French and so are more maneuverable.   There is some historical chrome:  French artillery problems at the beginning of the war mean that French combat strength is reduced in the early battles, though Prussian massed infantry tactics at the stat of the war mean that they take higher casualties.  Both sides have chances to improve their processes over time.

I’m playing a long scenario starting in July 1870.  Here two Prussian amies are massing near Saarbrucken, while a third menaces French forces gathering around Strasbourg.  One Prussian army has crossed the border and is besieging a French corps in the fortress of Bitche (cue puns here). 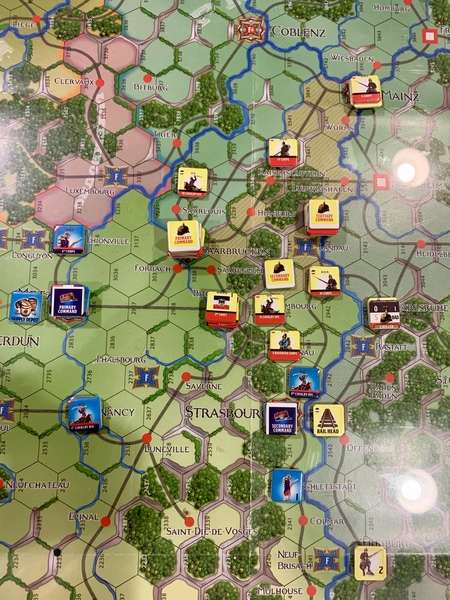 Turn 2 - with the largest Prussian army, the Second, with four corps, bearing down on Metz, the French command sees an opportunity to encircle and defeat it before reserves can come up.  A risky strategy as it would be better to entrench behind the river and rely on Metz’s defence, but (Gallic shrug) en avant! is the cry, as the French sally forth under the gaze of Napoleon III.  If the French get lucky and win the next initiative, they might have a chance of encircling and even destroying Second Army.  Battle has been joined as I slowly work out the combat mechanics.   More to follow. 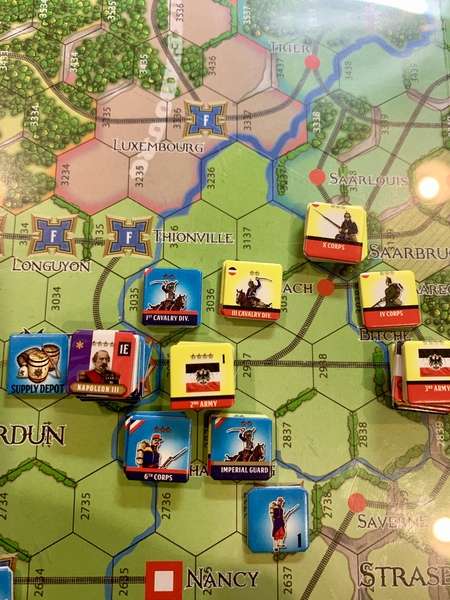