Little Landsers: Getting Ready for OGroup

I suspect that like a lot of people in the Too Fat Lardies community that are excited about the release of David Brown’s O Group rules for battalion sized battles, I have gone back to the 15mm WW2 part of my lead mountain to see what I could find.  There is a LOT in my 15mm lead mountain, some of it dating back to the release of Flames of War.   I decided the first thing to do was to increase the number of my early war Germans - a useful force, as I already have a massive number of 15mm Russians for them to contest the steppes with.

The figures are a mix of Battlefront and Old Glory that I bought in a mass order with some friends some years back.  The OG figures are, frankly, a mixed lot, some downright ugly, but they mix well enough with the BF figures.  I filled up enough painting sticks to do several platoons of generic Heer infantry with supports and command.  I put two man LMG figures on separate small bases to stretch the number of figures, so one LMG stand, with a five man infantry stand, is more or less a section.  Seems legit. 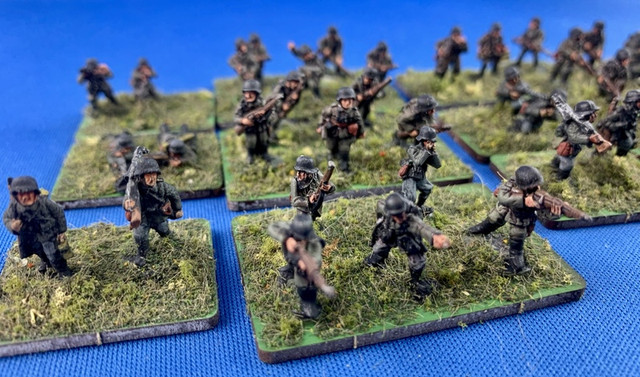 The figures were mass produced, and with a “good enough” attitude towards the final outcome.   I am not ashamed to say that I bought a can of Army Painter Field Gray spray primer to give me a base coat, and then picked out the flesh, weapons, helmets and gear.  Everything got a final wash of Windsor and Newton Nut Brown ink, a trick I saw from someone who uses it as a wash for 6mm Napoleonics, and I was happy with the end result.  The bases are coloured FOW size bases from 4Ground, covered with a blend of model railroad turfs.  I'm a slow painted, but I raced through all these figures in about five one hour sessions.

Finally, I had enough senior figures to make two command stands suitable for company or battalion level.  The fellow with the fancy overcoat has ben dubbed General Von Klinkerhoffen, in tribute to the late Hilary Minster of Allo Allo.

That should be enough for a decent sized engagement.   It’s pleasant to work in this scale again and not be too overly fussed over mistakes on a single figure.  I have a company of Battlefront Commonwealth infantry in the queue as I have become quite excited about 1st Canadian Division in Italy, but that’s another story.