Sometimes the best cure for the hobby doldrums is a new project.   My friend James deserves the credit and the blame here.    We are both fans of the TV SF series The Expanse, based on the novels of James S.A. Corey, and that got James into an impressive 15mm SF gaming project.    I have long admired James’ determination to bring a project to fruition - his contemporary Afghanistan project went from scratch to some very impressive, convention level games in a few years, and his SF efforts are similarly impressive.  There is an example here, including some nicely written fluff.

Some of James’ UN (Earth) Marines in power armour, figures by Ground Zero Games.  James’ project encompasses the Expanse universe, and I decided that I wanted a piece of that acton, but he seemed to have the various factions well represented.   That led me to start thinking about an alien race, of which there are plenty in the various 15mm SF anger out there.   But which one? 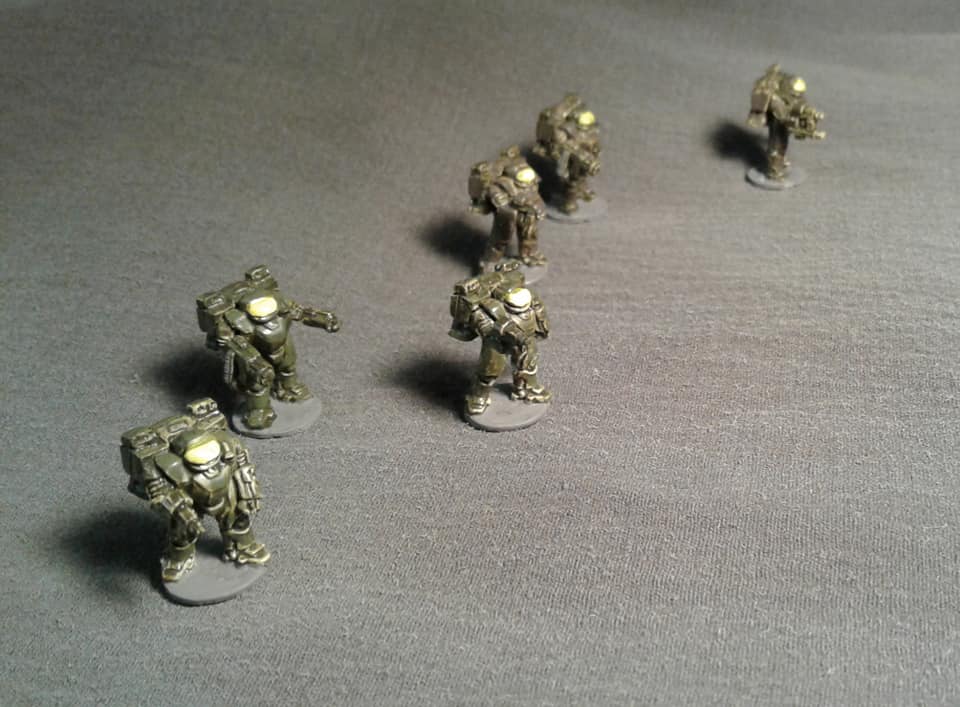 Errr, no, not those kitties.    My partner Joy introduced me to the Larry Niven Ringworld series this winter, and I loved the Kzinti character Speaker to Animals, so a race of martial cats seemed like a good choice, especially as James has (unkindly but aptly) accused me of being a Crazy Cat Chaplain.  It seems a natural choice for trash-talking and chirping - I am sure there will be lots of jokes about distracting my force with laser pointers, catnip, and guided tuna missiles.    I’m there for that.

Khurasan Miniatures does a nice line of 15mm SF felines, which they call Tigrids, so that was my Kzinti infantry sorted.   I got several packs of these light infantry, who unlike James’ troops apparently don’t need or have vac suits, and then several packs of heavier infantry who I will call equivalent to James’ guys in power armour. 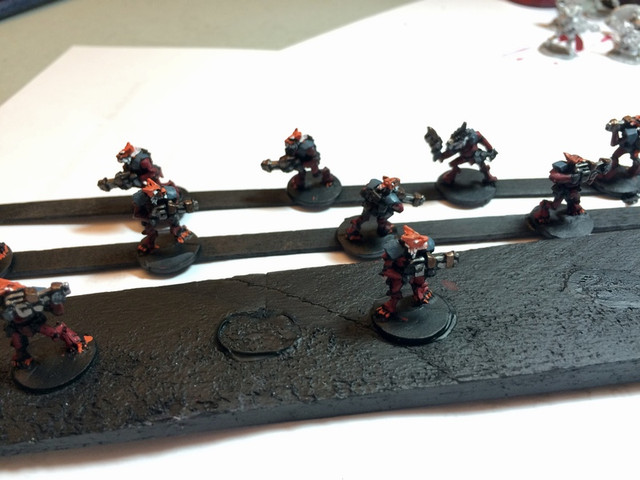 The paint scheme is pretty simple.   Citadel flat back primer (my usual choice for 15mm figures) and the armour in GW Khorne Red, which seemed an appropriately bloodthirsty colour for Kzin.  The red echoes the base colour that James chose for his Martians, so I guess imitation is the sincerest form of flattery, and besides, the Kzinti don’t care about your copyright protocols.    The blue shoulder plates allow me to identify the various sections.    I was quite pleased to see the figures come alive when I started to add the white whiskers and ruffs to the figures.    They just need green eyes and adorable little pink noses and they’ll be ready to go.  I think orange tigers for the rank and file, and white tigers for the leaders would make a nice contrast.

At first I thought about some sort of disruptive pattern, or even something drab like black or olive grey, but then I recalled a recent conversation with a former boss of mine, an infantry battalion CO, who said that he wondered why armies even bother now with camo and disruptive clothing.   There are so many kinds of sensor packages out there, he said, why don’t we just put soldiers in “pink tutus or Napoleonic hussar uniforms and just have fun with colours?”  Perhaps he has a point, though I am secretly glad that he’s not working in procurement!    Also,  I suppose one could argue that a proud martial race of fighting felines would consider camo and concealment to be dishonourable. 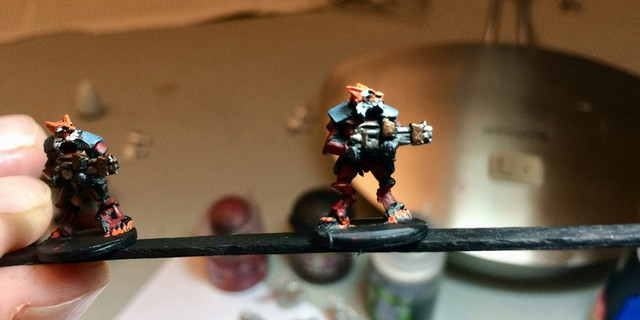 Khurasan offers a trio of jet-bike riders, so that was irresistible.   The idea of fast attack cats seemed very Kzinti, so I ordered three sets, which will give me a respectable recon and fast attack element to my force.   I would imagine that the youngest and most aggressive warriors would be selected for this hazardous and dangerous job.  These chaps aren’t quite finished but are getting there. 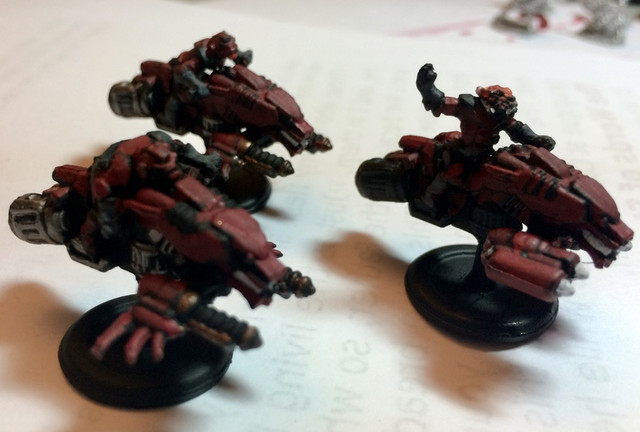 Space Kitty Bike Leader looks like the sort of type who would happily buzz the tower.  He has some very aggressive looking missile pods that should prove helpful. 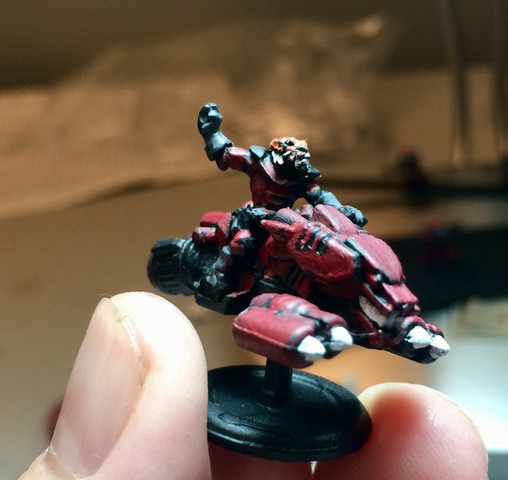 Finally, there is a an armoured component to my force, because who is going to drive across the galaxy to invade a bunch of high-tech monkeys without some decent AFV support?   I also ordered a few vehicles from Ground Zero Games from their line of Kra’vak alien vehicles.  This is one of three anti-gravy APCs which will carry a section each of my light infantry.   Again, a red base coat, but I have a pattern for it which should make it look more menacing.    The little blue swatch on the side is to remind me which section it belongs to.  There is also a tank, a SPG, a pair of drones, a pair of skimmer light attack craft, and a smallish spaceship to debut down the road.  The base is from a GW W40K set of Ork Deffkoptas that I have since gotten rid of.  This project is much more serious! 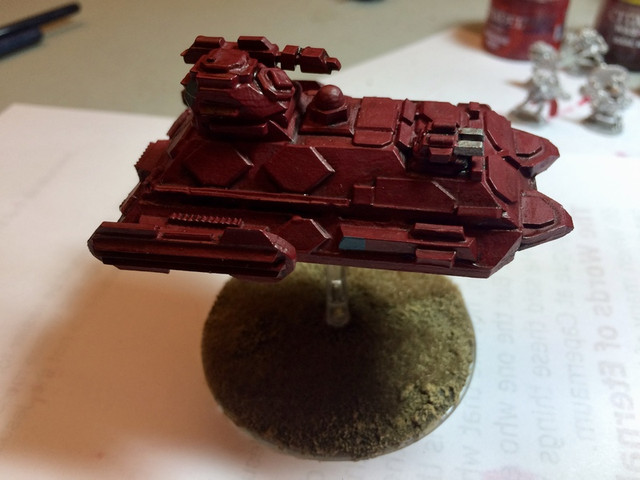 I will show more of my progress soon, I hope.   For those of you who are wondering, the rules we are using are mostly a bodge of James’ devising, very simple.   We hope to get our forces in action sometime by late winter or spring.