I’m a fortunate chap in that I have my own office at work, with space to layout a small game to noodle away at during my lunch hour.   Somedays I’m too busy, but some days I get to push some cardboard and roll some dice.
Currently I’m playing an OOP Avalanche Press title, Red Vengeance, which is a little gem I found in an estate sale purchase I made this spring.
Red Vengeance is a simple, high-level (armies and corps) operational game focusing on the Eastern Front 1944-45, a “Bagration to Berlin” approach .  The designer is William Sariego, not exactly a household name in wargaming circles but he has a respectable CV posted at Boardgame Geek.  Sariego designed a Barbarossa game, Defiant Russia, using the same system, which is still in print. 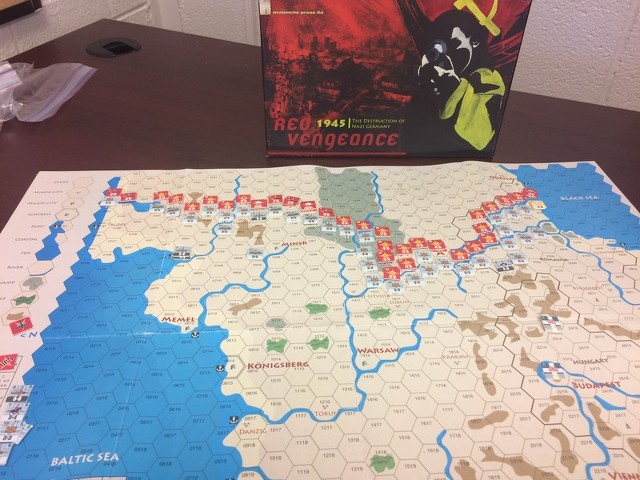 Turn 1: June 1944.  Here’s the opening setup, with the Germans opposing the Russians on a solid line running from the Baltic to the Black Sea.  This is a mandatory setup, with the German infantry deploying first along an indicated line of hexes, then the Russians, then finally the German armour.    Armour units have a higher combat value and movement, and also get to move and attack again during an Exploitation Phase, along with certain other types of units such as Soviet Guards.  The logical setup for both sides is to mass the armour in the centre, either north of south of the Pripet Marshes.
The game mechanics require Soviet units to attack Axis units in adjacent ZOCs.  German units do not have to attack units in adjacent ZOCs in their turn.   This rule means that on Turn 1, all hell breaks loose as the Soviets attack every single hex on the German front line, guaranteeing a huge bloodletting for both sides. One Turn 1, the German defensive rolls were generally poorer than the attackers, so the Wehrmacht was roughly handled and it has been going badly ever since.  When my son and I tried the game, we found that the first turn went slowly as it was a LOT of die rolling, but the game picks up speed thereafter. 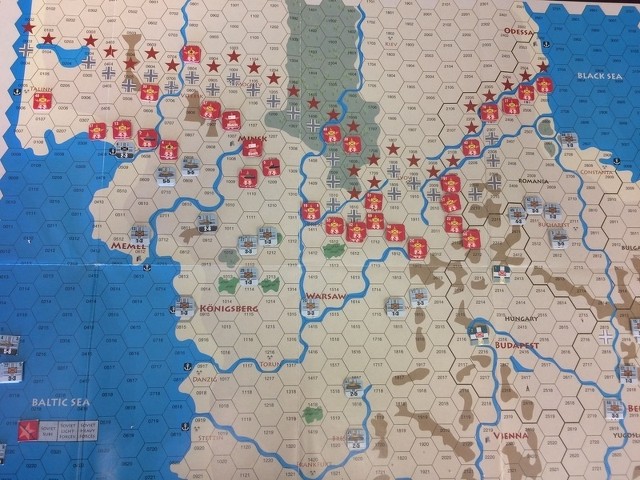 Three months later, here’s the situation at the end of Turn 3, August 1944.   Not good for the Germans.   Warsaw is threatened, and the Germans are practically broken into northern and southern pockets with little linking the two. 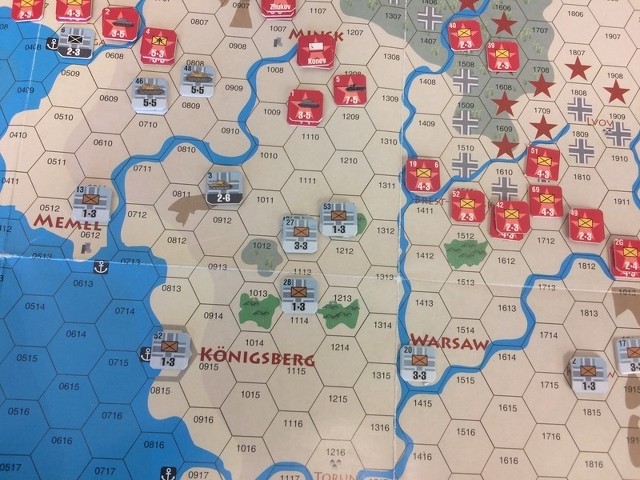 Army Group North is in falling back and is in serious trouble if Warsaw gets taken.   The Panzer reserve was thrown against the two Soviet Shock Armies at 0708 but that fight ended with no casualties on either side.  A reduced SS Corps grimly hangs on to Riga as a distraction, Combat in this game is very simple.  Each unit throws a number of device equal to its combat victory and each 6 causes a step loss on the opponent.  It’s that simple.   The number of dice can be slightly modified by terrain, or goosed upwards if leaders, air or naval support are present.   Provided that a stack takes as many hits as it has steps, it can lose one step and retreat a number of hexes equal to the remaining number of hits.  If the hits are one or more above the number of steps, the stack is eliminated.   Attackers and defenders shoot simultaneously. 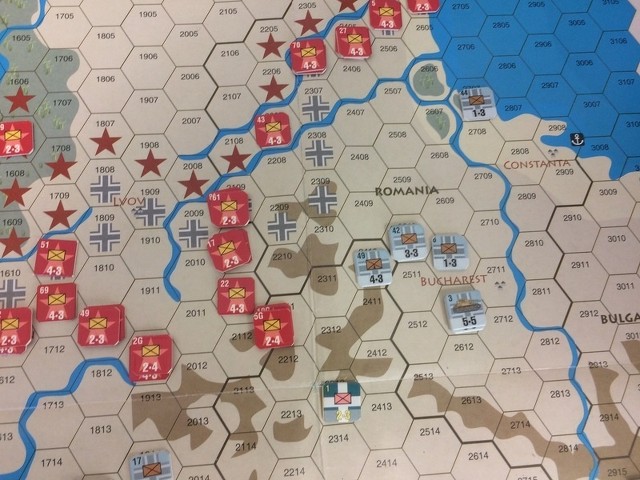 Meanwhile Army Group South is falling back on Bucharest, leaving that one poor Hungarian unit at 2313 to hold the mountains against the Red Horde.  On the southern flank there are two hexes with oil wells which are quite strategic.   For each one that the Axis hold, they get one additional armour step replacement.   It is possible to build up and even reconstitute lost units in this game, but there are never enough step replacements, generally just 4-6 per turn, and the armour step replacements dry up in 1945.  There are some reinforcement units that arrive, so the German strategy as I can see it is to counterattack where possible, fall back, trade land for time and hope that the reduced movement in the winter turns slows the Soviet juggernaut.
Red Vengeance is a small game that is well suited for solitaire play.   There are a few chrome and optional rules to experiment with, but the joy of the game is how simply it plays.     It certainly keeps my mind diverted on those rare days when I have a free lunch hour.
I’ll check in again next Thursday and see whose flag is flying over Berlin.
Blessings to your die rolls!
MP
Posted by Mad Padre at 11:32 AM