The first thing to say is that this wargames blog is nearing 100,000 page views (99,159 as of noon today) so there will be a contest, with a prize for cleverness, so watch this space.

After spending several evenings recently putting innumerable stickers on blocks, I was ready to try Command and Colours Napoleonics.   This game may be old news to many of you, and possibly uninteresting.   However, other than playing it once head to head using Apple Face Time with Kinch, the system is new to me, and I have to say, it is a splendid introduction to Napoleonics gaming.  Some may find the card-based approach unrealistic.  I had a conversation recently where I was told that using cards with names like “Assault Right Flank - 3 units may be ordered” is nothing more than casting a spell.   That’s an interesting criticism, though I see parallels between the C&C system and other card-driven systems like some of Sam Mustafa’s recent rules.   I suppose using cards is a “gamier” variant on using command initiative points systems and thus model friction to some extent, as opposed to letting each player move every unit every turn.

One benefit of the C&CN system for people like myself who aren’t steeped in Napoleonics is that the games act as a primer for the period.   Each scenario gives a useful overview of battles, and in the case of C&CN’s basic set, it’s a good introduction to the Penninsular War.   I decided to start at the beginning and chose Rolica 1, First French position, Wellesley’s first battle against the French.   The scenario setup and background is found on page 2 here.  In looking at it, the first thing I realized is that I overlooked the British horse artillery unit on the British left wing.   Forgetting that asset no doubt made the British work harder for their victory.

On the French left wing, as the French (playing myself) I decided to be aggressive, advancing my light cavalry and infantry to check Trant’s Portugese, which suffered heavy casualties.   Here Trant shelters in a much reduced infantry square, while his lights snipe at the French from some woods and Wellesley sends half of his infantry reserve to shore things up. 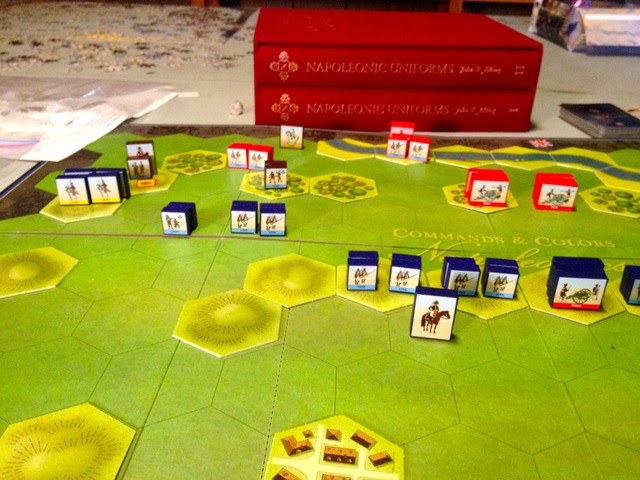 On the right things are going less well for the French, whose other unit of light cavalry were totally shot up by the redcoats then finished off by the advance of the British heavies.   In this shot the British have managed to sneak a unit into the village of Rollica, thanks to the Out of Supply card which allowed them to move the French unit holding the village to the board edge.  Things are looking grim on the French right. 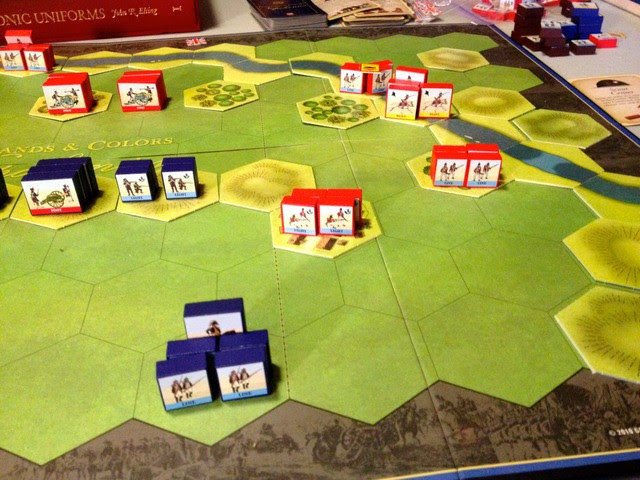 Final score, British 5, French 2.   In the last few turns the British got the replacements card and were fortunate enough to top off the Portugese cavalry, which Trant finished off the French cavalry and now have a clear shot at the last remaining objective.   British units on the left are thinned out but hold the other objective and have the five banners needed to win.  Quite a bloodletting on both sides. 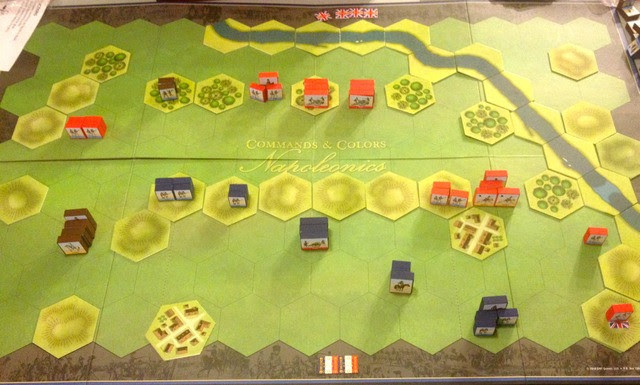 Towards the end I realized I was doing a few things wrong.  I didn’t understand the significance of the sabres on the bespoke dice, which require a leader casualty check if a unit with a leader loses one or more blocks from infantry or cannon fire.   It also took me a while to understand that when the rules speak about Ordered Units, they are talking about units which are given an order to move/battle as a result of a card.  Ordered does not mean ordered/disordered I don’t think.

So yes, C&CN is a fairly simple affair when it comes out of the box like this, but it’s an elegant system and its fun to play even solitaire, though I would love to find some opponents, either locally or via Vassal.  I have the Prussian and Austrian expansions, and would like the Spanish set if it’s still in print, though I haven’t seen it in stores.

So that was by board gaming for the past week.  Next up is a European game on Frederick the Great which looks quite good.