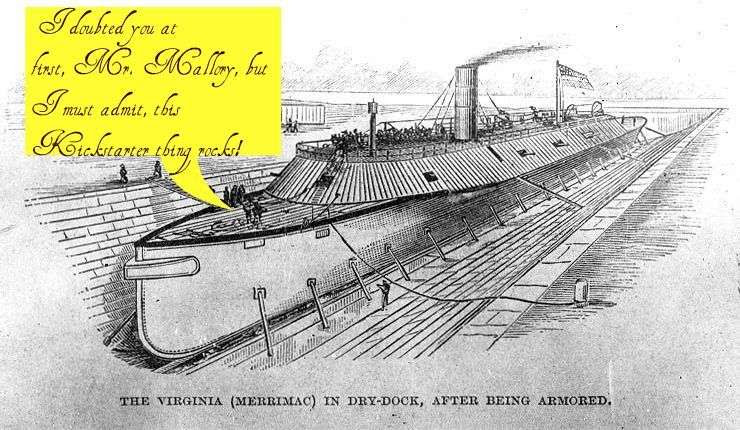 I confess I am not yet convinced of the merits of Kickstarter, which is to say, truth by told, that I haven't found a project yet in our hobby that got me excited. That may have changed. I was very intrigued to read on the Ironclads Yahoo group this morning that Toby Barrett, proprietor of Thoroughbred Miniatures, has the rights to the old Yaquinto boardgame Ironclads and the expansions, and wants to port them over to the iPad platform.

This idea strikes me as eminently sensible because I have an American Civil War ironclads game on the table at present, and there are times when the ship models are obscured by a multitude of charts and tables, and if the ship models are visible, often the paper covers the little turning and arc of fire widgets I need. While the rules I am using, Smoke On The Water from Canis Publications, are perfectly fine, it's all a bit more cumbersome than I would like. I have an iPad and I have been slowly migrating .PDF copies of rules to it, and I would welcome a tablet-based solution for ACW naval gaming.

Here's a quote from Mr. Barrett's post on the Ironclads group:

Tonight on Kickstarter.com I launched a campaign in order to raise funds which will pay for the programming of an App to run on the Apple iPad. The App will contain everything from the original Ironclads game - all the rules, data cards, scenarios, and such for miniatures play, and will include a game referee and a combat resolution module to greatly help to speed up the operation and ease of the game. What happens on the table will still be key with the player more able to concentrate on movement, decisions and tactics. If you are not familiar with Kickstarter it is a web site whereby artists, creators and anyone with an idea can go in order to raise funds for projects in exchange for incentives. It is sort of like the show on TV Shark Tank but without the attitude and the millionaires. Several things came together – finally – to allow me to try this project for the Ironclads rules. First the amazing iPad system which I think will change a lot of things and greatly help gamers around the miniatures tabletop. Second I met a great programmer for the iPad, Jeremy Alessi, who is very skilled at the IOS programming skills required for creating apps for the system. (Jeremy has several apps already in operation, Airspin and Fat Rat. Check them out.)

The project URL for the Ironclads Kickstarter campaign is: http://www.kickstarter.com/projects/293087222/the-ironclads-app?ref=email and anyone on this group list can go there to read about the project and decide if they wish to become a backer at one of the several levels offered. Anyone familiar with the Thoroughbred 1/600 product line will know I stand by my products and am offering a whole slew of new models for the campaign. I promise my work and efforts to turn out an excellent Ironclads App will match the same quality of work shown in my miniatures over the years. And I will continue to maintain the level of excellent customer service I have always practiced in order to fulfill my promises for the campaign. Questions can be asked and given on the Kickstarter site, or I'm available on this group and by regular email to offer answers. Regular updates and video clips of our progression will be added to the Kickstarter site, so please plan to return for repeat looks. As Always, Thank you and Enjoy! Toby Barrett Thoroughbred Figures Portsmouth, Virginia

So I'm in. My first Kickstarter project, very exciting. If you are a fan of ACW naval gaming, I hope you'll consider it.