Seduced By The Barmaid ... Or How Miniatures Sometimes Get Painted

She spoke German, not Italian. But there she was, way at the back of the painting queue, and somehow she caught my eye.

Perhaps you, good reader, are careful to enforce discipline in your painting queues. Figures are painted by project, or by time waiting in the lead mountain, or some such rule. I try to have guiding principles such as these, but I confess I am a victim to my own self-diagnosed painting ADHD. The problem is confounded by a shapely leg and a saucily poised beer stein. 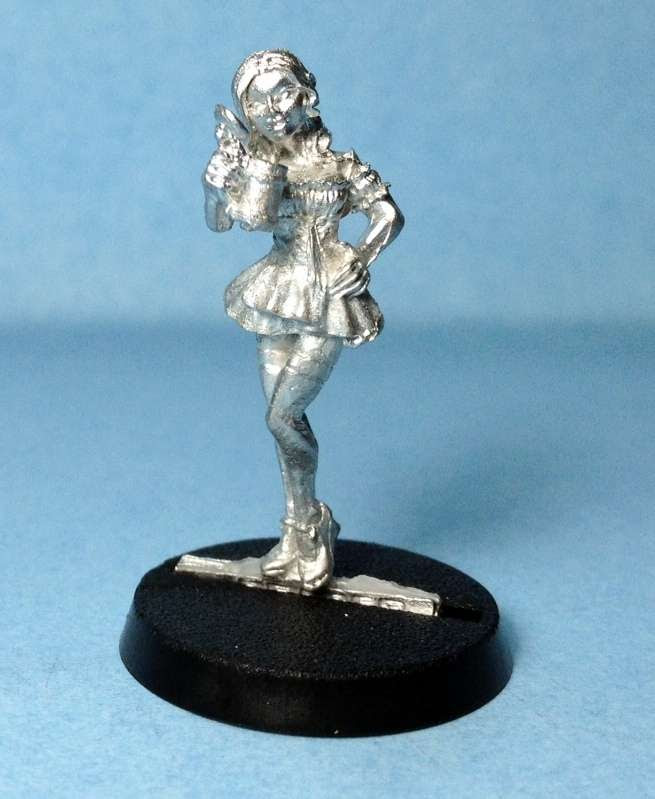 She is the Reaper Miniatures Oktoberfest Fraulein, purchased for my Weird War Two project, which is still a vague mass of ideas and scenes from old films that only exist in my head. I sort of envisioned her as an Allied agent or resistance fighter, infiltrating German beer halls to worm secrets out of lager-addled Nazis, perhaps something along the lines of the late Ingrid Pitt's character Heidi from Where Eagles Dare. 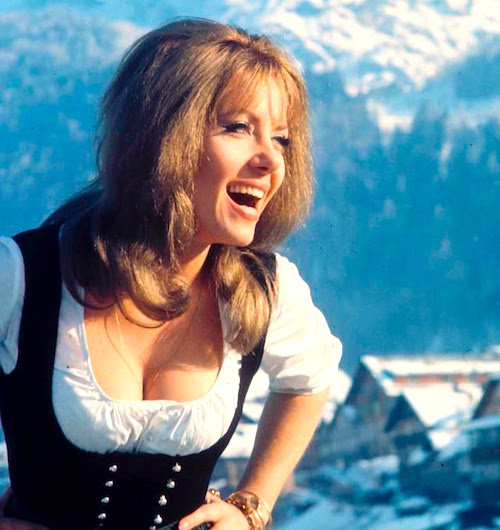 Where was I? Oh, right. While I was painting some samurai figures for Curt's Analogue Hobbies painting challenge, she caught my eye from a box of unpainted figures tucked on a shelf by the painting bench. A finger beckoned, a promise of some good Munich beer, and a sly wink, and I was putty in her hands. Besides, as I mentioned here earlier, since she knew that I had no geisha girl figures on hand, she promised to be a calming influence on the samurai, and she was, mostly, though, like cats to their owners, they kept bringing her body parts. 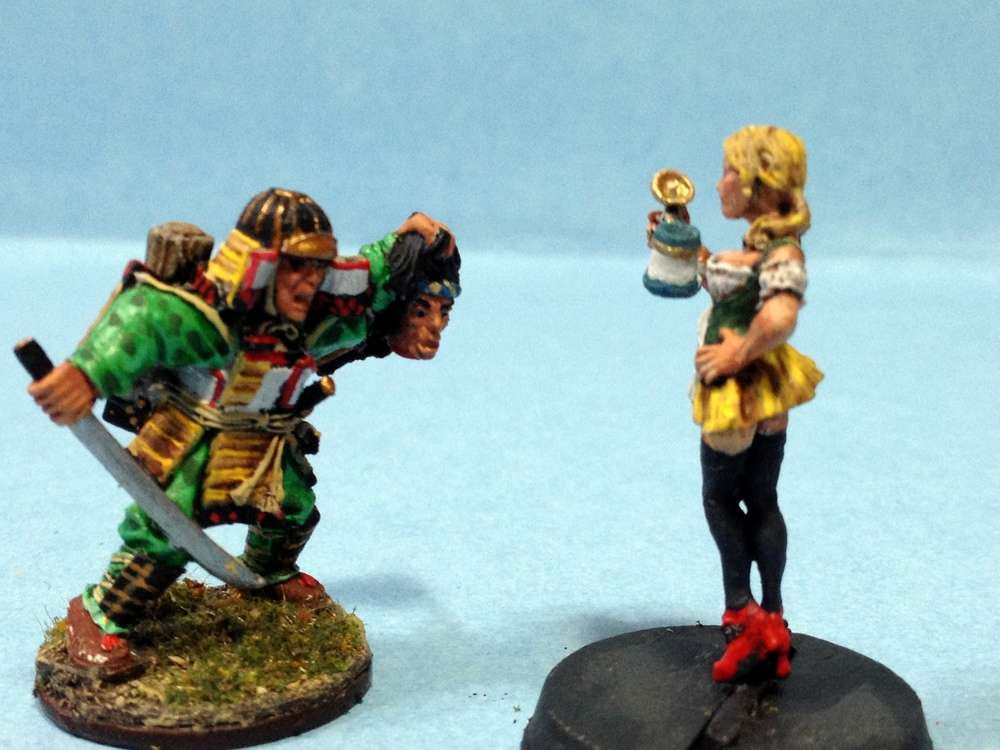 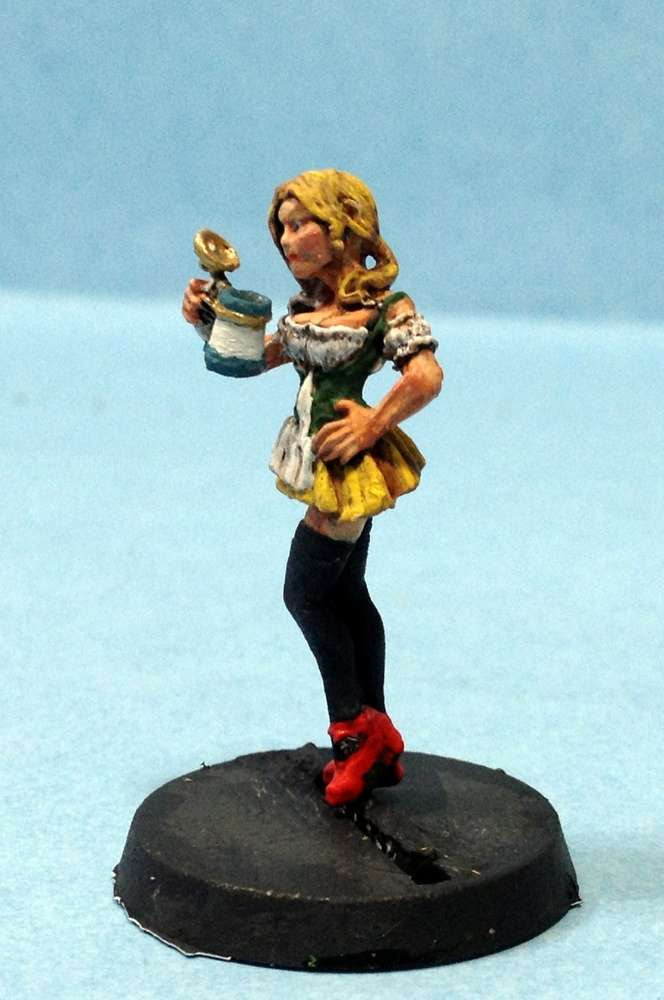 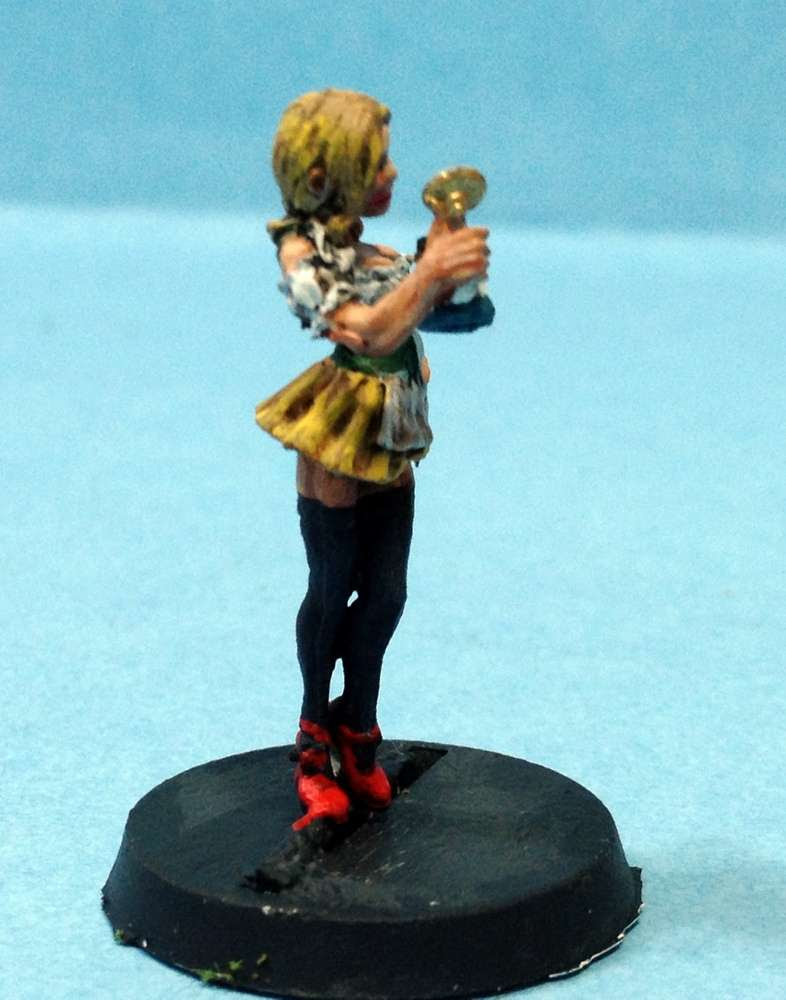 Yes, I know, shocking for a middle-aged clergyman to be painting figures such as these. I'm shocked myself. And to think she was painted during Lent. 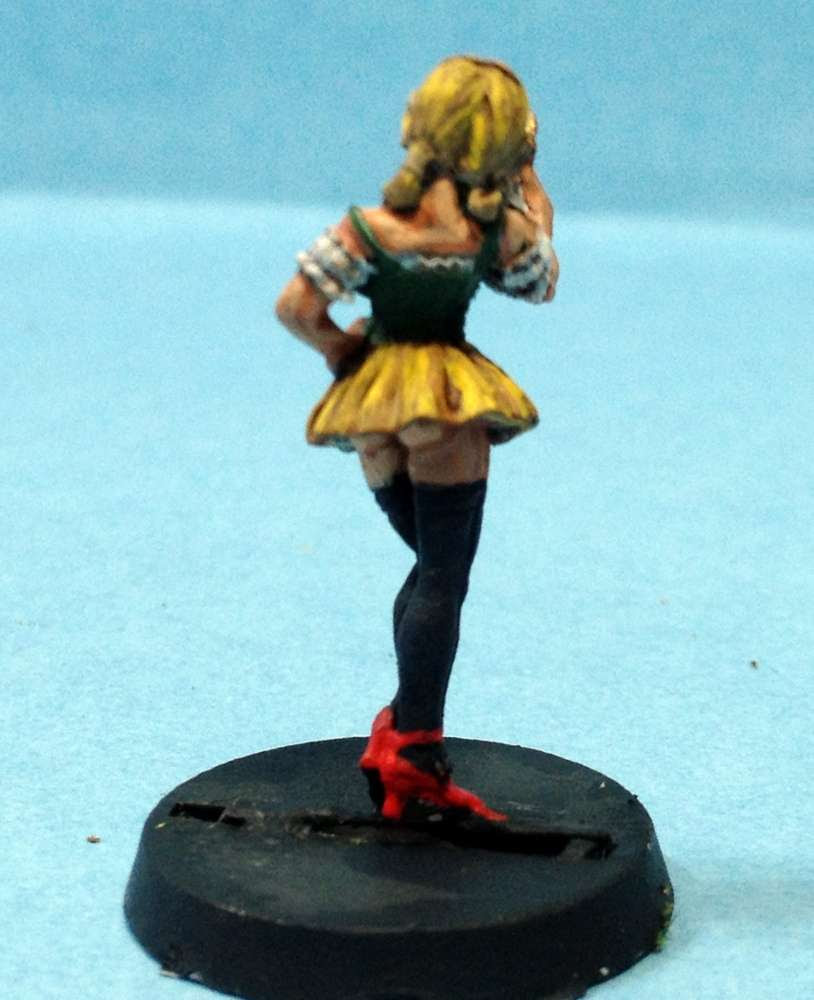 The samurai angle got me thinking about a character background for this charming lady. Let me know if you think this works. From Project Alice Personel Files, Top Secret Operative: Ingrid Pittcairn Code Name: KATANA Biography: Daughter of British missionary teacher (The Rev. Lancelot Andrews Pittcairn) and Austrian missionary nurse (Irene Pittcairn, nee Gammel) who met while working in Japan in the 1920s. British citizen, fluent in English, German, Japanese and Chinese. Largely raised on the northern island of Hokkaido, where her family befriended a Buddhist monk with training in the anciet samurai arts. Rv. Pittcairn, an eccentric and liberal-minded father, indulged his daughter when she asked the monk to teach in the martial arts. Upon her father's death in 1935, Ingrid and her mother settled with relatives in Vienna, but fled to England following the Anschluss. Ingrid enrolled in languages at Oxford University, but left her studies following a dispute over her being forbidden to participate in varsity fencing. She was recruited by Intelligence as a linguistic analyst, working in the Asia section, but a meeting with Padre Tristram Mercer, a friend of her father's, led to ber being taken on by Project Alice. Ms. Pittcairn has no special supernatural aptitude or abilities, but her knowledge of Buddhist meditation practices, her keen mind, linguistic abilities and athleticism, it is believed, will make her well-suited for the kind of work to be expected of Project Alice operatives.

Now, if only someone were to sculpt a Bavarian beer garden girl wielding a samurai sword, I could die a happy man.