Yesterday was a happy one at the Mad Padre's Painting Chapel on the edge of the frozen Canadian prairie. Two parcels were waiting for me when I arrived home from work. One contained an intriguing collection of 15mm Battlefront figures, the result of a trade between myself and fellow blogger Chris Stoesen of Wargamer's Odds and Ends (check out his scenario books while you're there). I had a bunch of 15mm ACW figures that were never going to get painted, and he had some WW2 figures, which might, possibly, get painted, and it was a good deal all around. About a third of the minis Chris sent me were Russkies (the chaps in the centre on the popsicle sticks), and so they are going to get slotted into the schedule as Russian February continues. 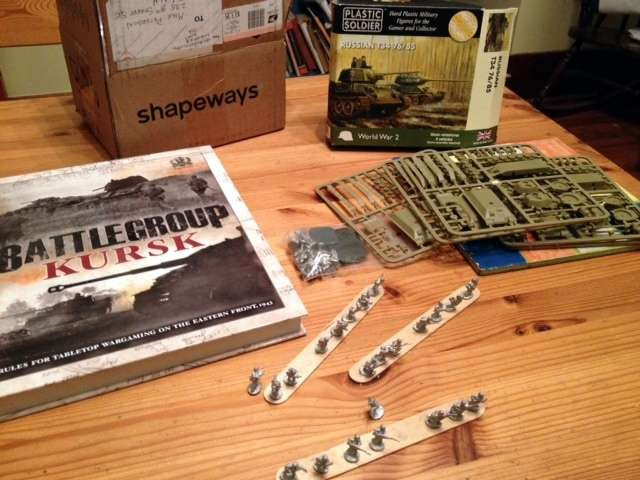 Now I'm mindful as I writethis that today is Ash Wednesday, and today during the liturgy we confessed "Our intemperate love of worldly goods and comforts". I'm really hoping for an exemption from "intemperate love" when it comes to wargaming toys, and I haven't yet heard the call to stop painting or playing as my fasting regime during Lent. Maybe I'm not listening hard enough, I'm not sure. (Holds hands over ears - LALALALALALA). The other box to arrive yesterday was from my pusher (err, I mean, my dealer), James of J&M Miniatures, who lived up to his repuation for fast and courteous rabbit-enhanced service, and sent me a box of five 15mm T34/85s from Plastic Soldier Company and the new Ostfront rules produced by PSC and written by Warwick Kinkade, Battlegroup Kursk.

The T34s are the first products I have seen firsthand from PSC and I am impressed. After wasting three hours of my life trying to assemble and then binning a Nitto Tiger tank model that I got at some flea market, I will only build simple plastic tank kits from now on, and PSC, like Armourfast, are simple. I've only briefly looked at the sprues, but everything looks cleanly moulded and I think I can put all five together in an evening. They are nice kits, and will give me a start on a 15mm Soviet force to allow me to dual-role all the 15mm German kit I originally got for Normandy. I'm sure I can get the T34s done and painted as one of my Russian entries for the Analogue Painting Challenge.

Why Battlegroup Kursk? Chalk it up to my "intemperate love of worldly things", or, if you are slightly kinder, to my "oohh shiny" moment. It does seem an odd move for me, especially as I have TFL's IABSM3 rules and Richard Clarke is within days of coming out with his Eastern Front supplement. If I have to explain it, I guess because people I respect, like Mike Siggins in Battlegames, or Donogh McCarthy on his blog, have said good things about it, and because I've been tracking Kinkade since his involvement with KG Normandy and the late Warhammer Historical. I've read interviews with Kinkade and like some of his design ideas. Am I convincing you yet? No? Oh well. I've only had the briefest of time to peek inside the book. It reminds me of a Games Workshop rules book, hardback, impressive production values, lots of pictures, and a helpful modelling section. I of course am a sucker for eye candy, but I hope to try the rules soon. More to follow on that, including some peeks at my 20mm Soviet army when we get to April and my "Resurrected Armies" project.

In the meantime, may God prosper your brushes and bless your dice rolls!