I managed to knock off another goal for the Analogue Painting Challenge by getting this batch of Germans done. Yes, they are SS (I can hear young Kinch getting ready to go Boo, Hss!) and yes, I am ambivalent about painting bad guys, but they will give my Canadians someone to shoot at, and I am already thinking we are due for another batrep about your Denis Audet.

This set (WS02 10 MAN INFANTRY SQUAD IN CAMMO SMOCK/HELMET COVER)of 10 figures are from TQD Castings, which I gather is an imprint of CP Models from the UK.

I have to say that I like these figures, but TQD/CP's sculpts are a bit of an acquired taste. Sometimes the bodies seem just a little off to me, heads a little smaller than they should be or bodies a bit distored. The chap lunging with the bayonet is an example, as is the slightly overlong pointing arm on the squad leader. However, these figures grow on you. The sculptor certainly knows German kit, and the attention to detail in terms of webbing, gear and weapons is first rate. A good example are the MP40 machine pistols some of these figures are holding - they all look right in proportion to the bodies.

These chaps are my first real attempt to do a proper late war Peadot style of German camo as was often seen in the Normandy campaign. The paints used for the camo are all Vallejo, and I studied many examples and tutorials posted by the knowedgeable chaps on The Guild. I leave it to you to decide if I got it right, and if I didn't, please tell me! I promise I won't sulk. 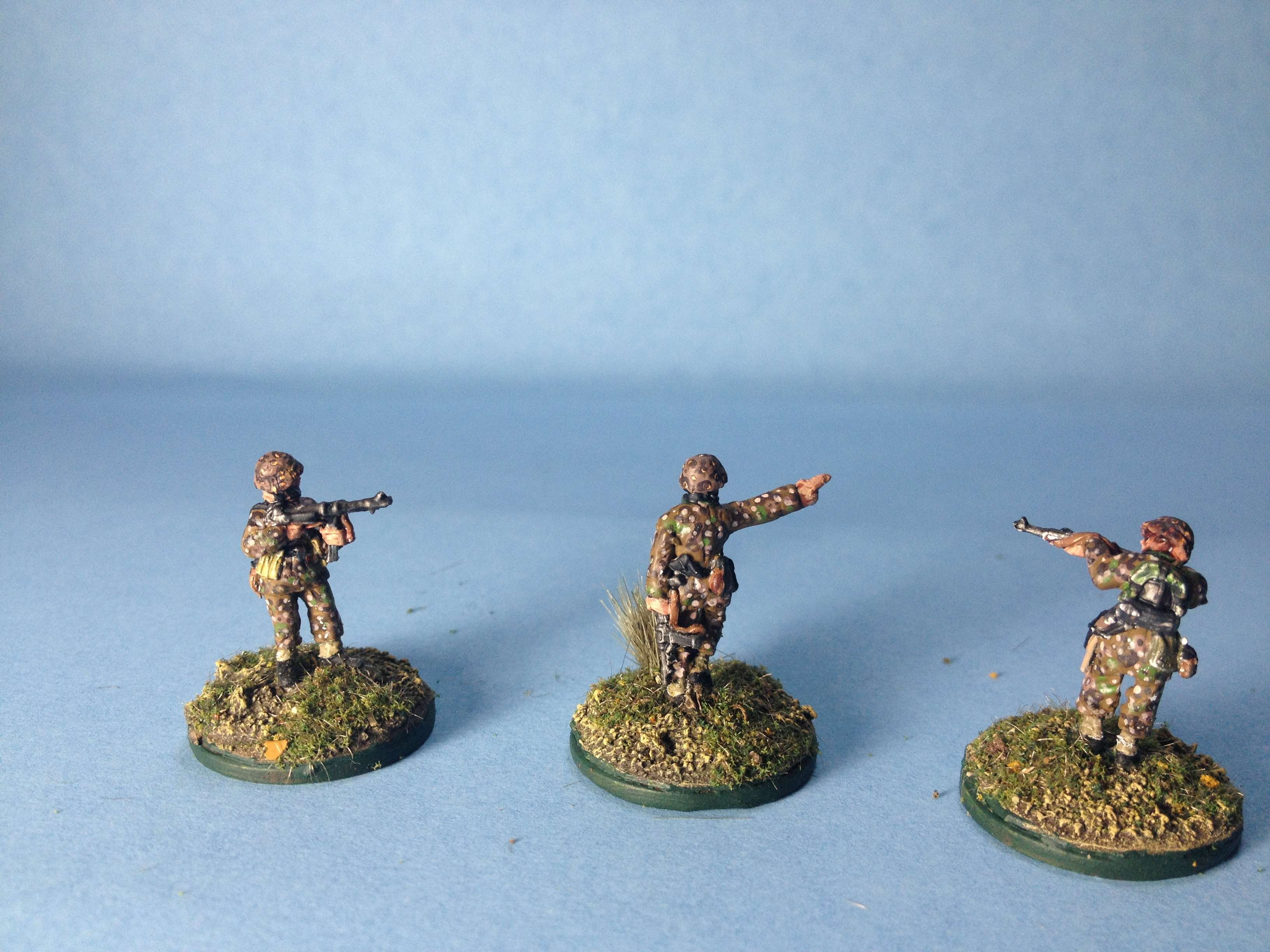 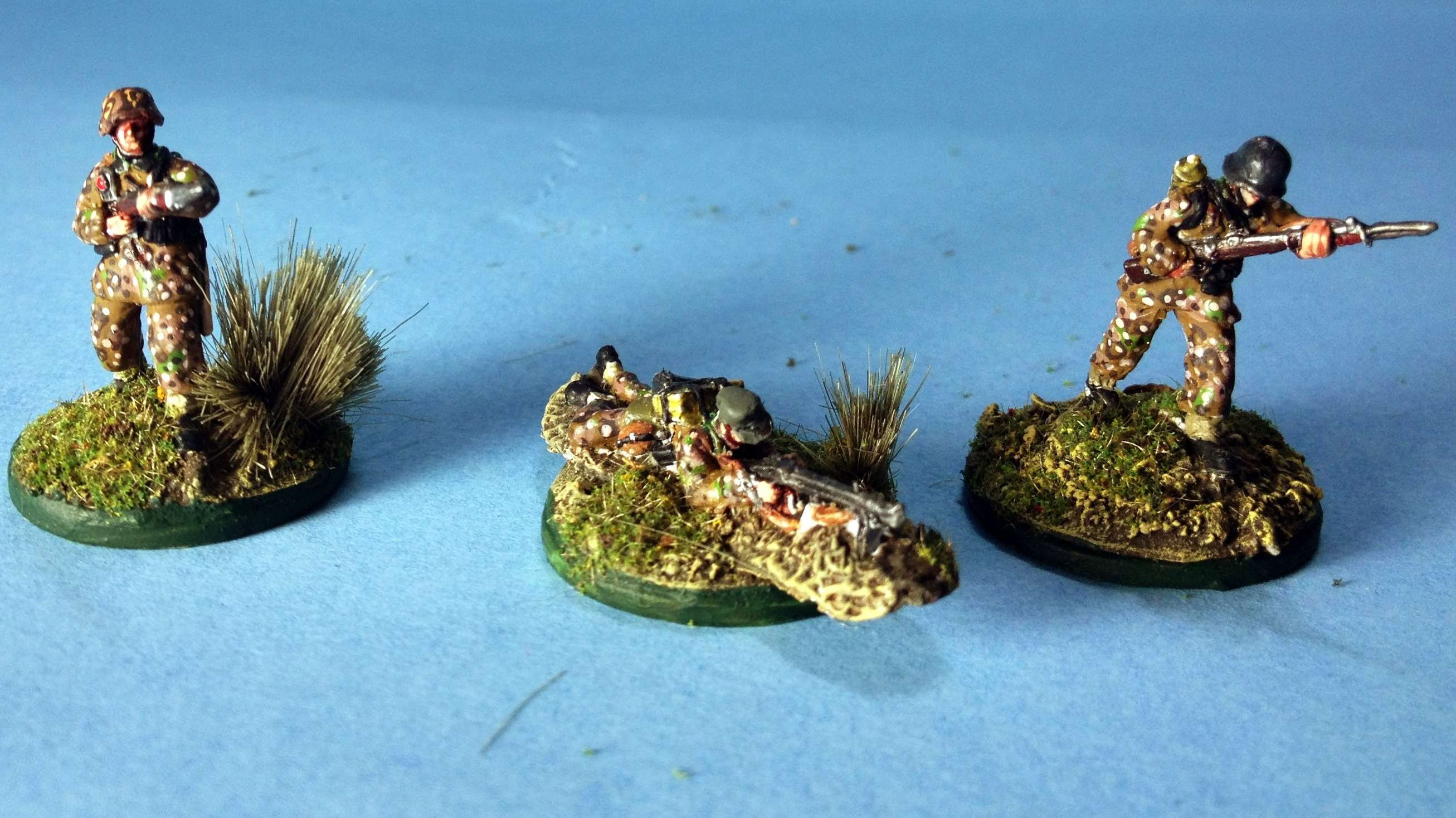 Also part of my Analogue Hobbies entry are five German casualty figures from AB Figures(WH11 Dead Germans 6 figs - I painted one previously) that have been sitting in my lead mountain for a few years, while I worked up the nerve to take on German camo. I know fellows who feel that spending perfectly good money and precious time on casualty figures for wargaming is a waste. I respect that point of view, but for me, I believe that if we are trying to faithfully recreate an experience which is fundamentally horrific, then casualty figures are necessary. Whether using them one for one in a skirmish game, or using one to indicate morale, shock points, accumulated hits on a large formation, etc, I want to use them. As Robert E. Lee said, "It is well that war is so terrible, for otherwise we should grow too fond of it."

As I said on Curt's site, AB Figures to me are the gold standard for 20mm WW2 gaming. They are simply the finest figures in that range on the market, and I would love to have more of them. I can only say this about their infantry and vehicle crew figures, I haven't seen any of their support weapons, vehicles or accessories yet. 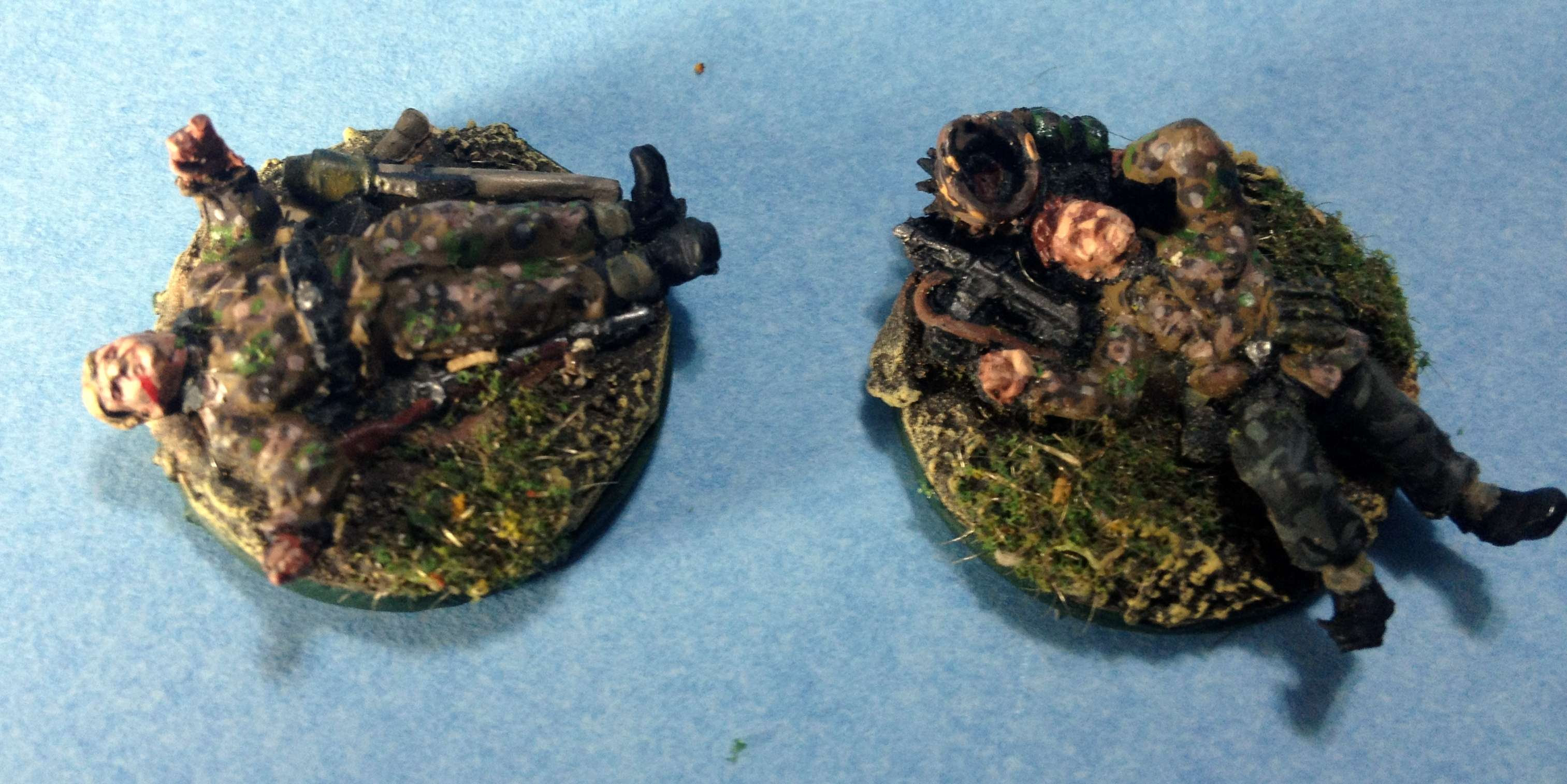 a final painting note: the TQD Wafffen SS figures were painted using a white undercoat from Army Painter. The AB casualty figures were primed some years back in a flat black spray paint from a DIY store. To me the camo looks brighter done on the white undercoat. Can you see a difference?

Thanks all for looking. Don't forget the Mad Padre Wargames contest currently running. All you need to do is write a few lines (they don't even have to rhyme) about something you see or read here and get entered to win one of four painted miniatures. To date we only have two entrants, so your chances are excellent. Don't be shy!

Next up, two Russian SU152 SP guns, another target for the Analogue contest. Painting is going well, I had a successful outing with my airbrush, and I am about to start experimenting with my Vallejo pigment set. Should be very exciting. Plus a pack of 20mm Revell Soviet Cossacks jumped onto the painting desk, jealous of the 28mm Front Rank SYW Russian Hussars I've started. It looks like February will be the month of Ivan here at Mad Padre Wargames. May God prosper your brushes and your die rolls!