After interviewing Curt Campbell for the podcast a while back, I decided that I’d like another go at his Analogue Hobbies Painting Challenge, partly for the community, and partly because it’s a great incentive to be productive.  I’ve set myself a modest goal for this year, but have gotten three entries on the board so far.

Here are five 15mm SciFi troopers from Darkest Star Games.  DSG is a small but ambitious mini maker, that was recommended to be by Ivan of Nordic Weasel Games (@weasalnordic) when I asked on Twitter for some advice on sourcing 15mm SciFi figures.    I placed a small order, some humans and their humanoid canine (!!) allies to fight what I call my Space Kitties.  Readers with long memories may recall that in 2019 I started a SciFi project that was loosely modelled on Larry Niven’s Man-Kzin wars.   I knocked off a satisfying number of space cats, and then decided to back burner it while I looked for human figures for solo games. 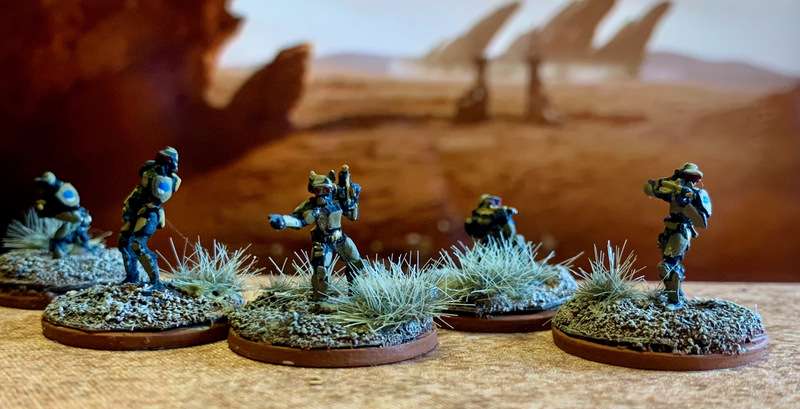 I had the idea of painting them in desert colours, using Citadel Zambezi Desert and Tallarn Sand as the main colours, while retaining sections of the dark undercoat to suggest segmented armour.  Vallejo German grey was also used for their clothing visible under the armour.

I wouldn’t want to use these in a stand-up fight but I could see them being used as Special Recon, in some SOF or LRDG role, the first to be inserted on an enemy occupied planet to scout landing zones, work with friendly indigenous inhabitants, attack high value infrastructure, that sort of thing.  All very sneaky beaky.  I gave them blue/white identifier markings on their shoulder armour, which I think is a pauldron if I remember rightly?  Which makes these guys almost Space Marines?  :)

Everybody I ever served with liked their unit patches, even on camo uniforms, and I don’t imagine the future will be any different.  Hopefully I’ll have more SciFi figures to show soon.

Thanks for looking. Blessings to your brushes!