Trouble On The Border: A Sharpe Practice Skirmish

Having laid out this table to see what my Barrage Miniatures Kickstarter modular terrain looked like, it seemed a shame not to use it, and the obvious candidates were the Perry Brothers figures I’ve just finished for my alt-ACW project.  So, inspired by the battles of Ross McFarlane’s Red on Blue battles (Oberhilse … boo!), I decided to lay out a generic solo fight as a force of Republican troops crossed the border to test the Dominion’s defences and try to seize a key crossroads.

I don’t have photos to illustrate the entire action, but hopefully can convey a sense of what happened.  Here’s the table.  I allowed the Red forces to set up first.  The Blue forces enter from a deployment point on their table edge. 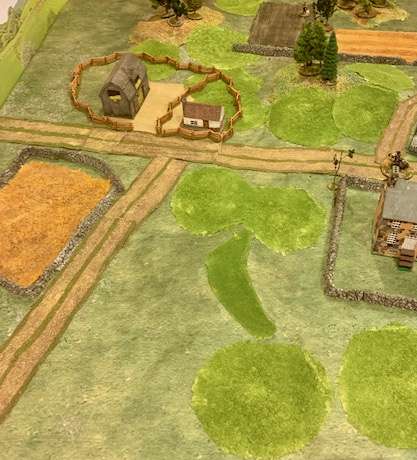 First Republican skirmishers appear on the table, led by Sergeant Quigley.   I thought it would be a nice aesthetic to use my ACW Iron Brigade figures in their Hardee hats for this skirmish.  The Republican jump off point is in the background. 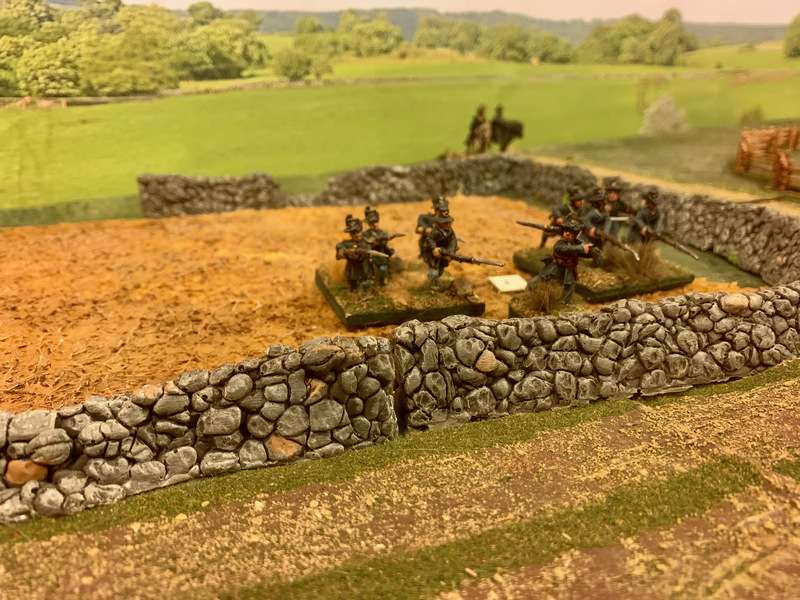 Overview of the table showing the Dominion’s positions.  The Republican infantry, in slightly larger numbers, are now all deployed on the table.   The Dominion forces, all militia infantry, are supported by a Royal Artillery gun with a Regular crew. 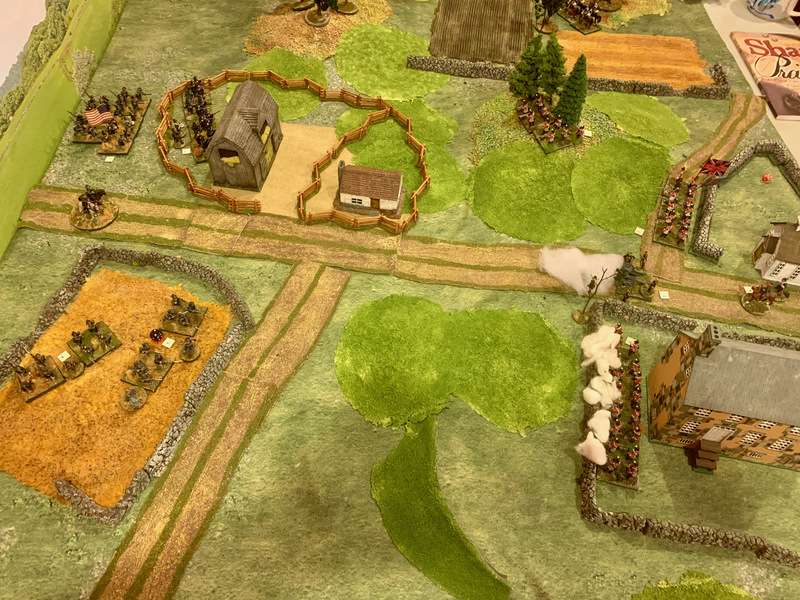 The largest group of militia squander their first volley on the skirmishers facing them, to little effect. 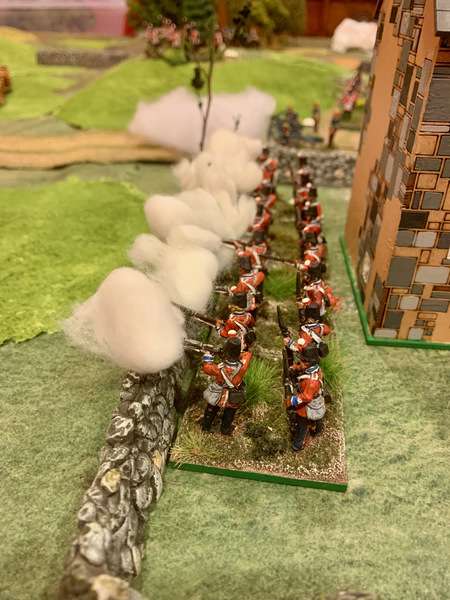 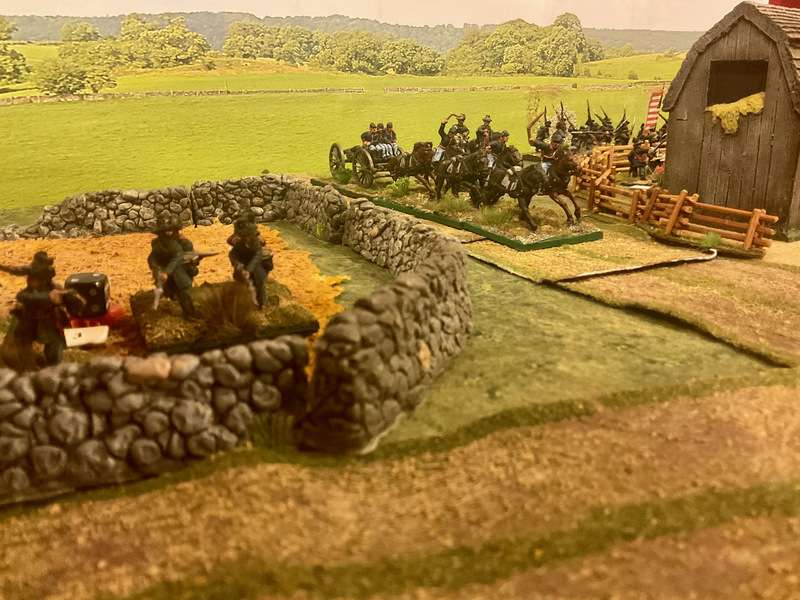 A group of Dominion militia cavalry, led by Sergeant Boscombe, probes the right flank.   Since the Republican cavalry is otherwise engaged and not at this fight, these eight riders will tie up the largest group of enemy foot for most of the game. 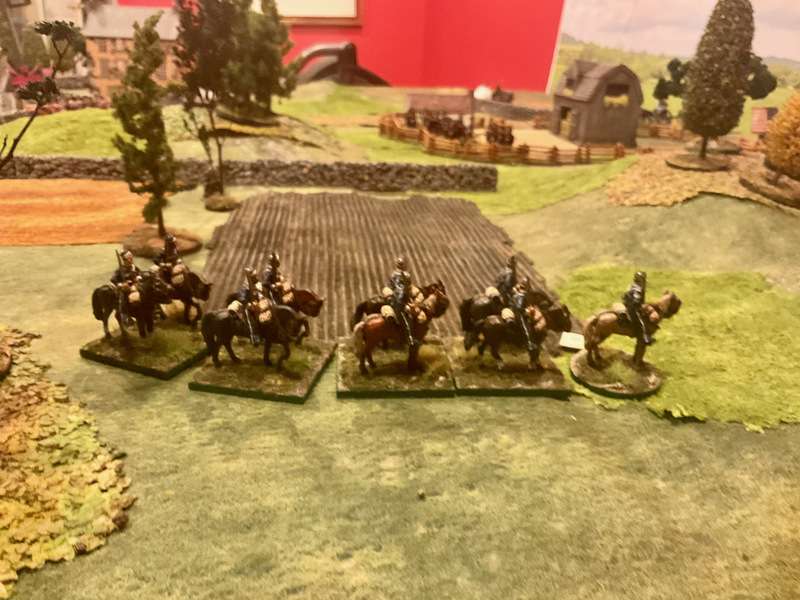 The Royal Artillery opens up on the advancing enemy limber team. 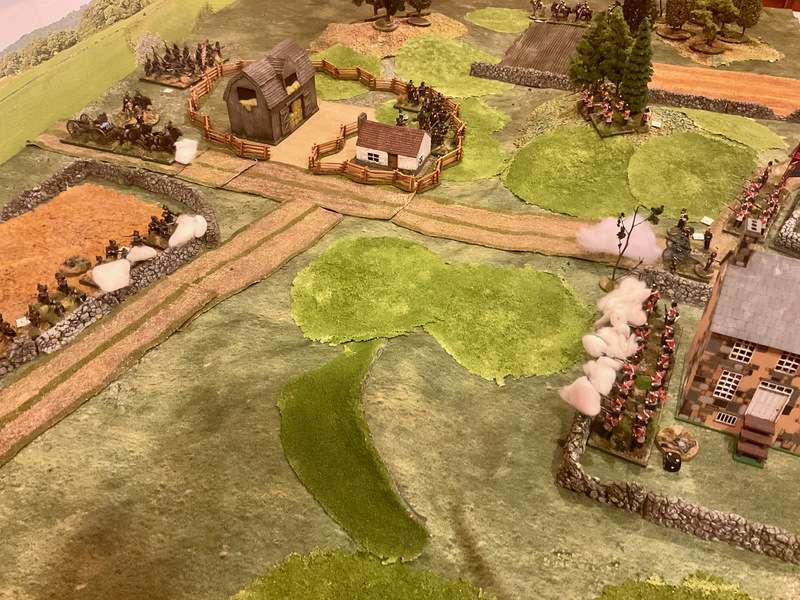 As the Sharpe Practice rules are vague on hits to limbered artillery, I rule that the two kills apply to the lead horses.  I add 2 extra actions per casualty to clear the dead horses from the traces and unlimber the gun - it will thus take four extra actions to bring the Republican gun into action. 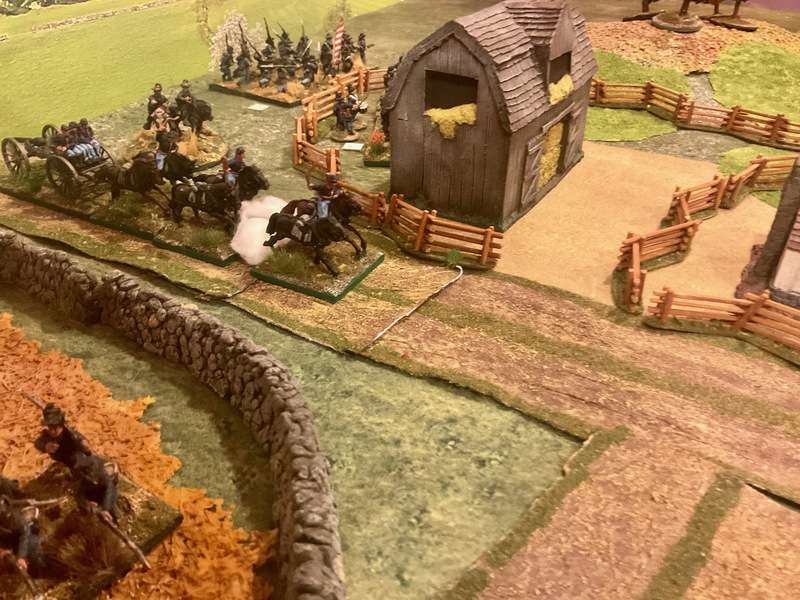 “Well done, lads!”  says Bombardier Boyle.  “Now load up and ‘it ‘em again!”  Capt. Travers, commanding the militia colour party, holds in reserve on the right of the artillery. 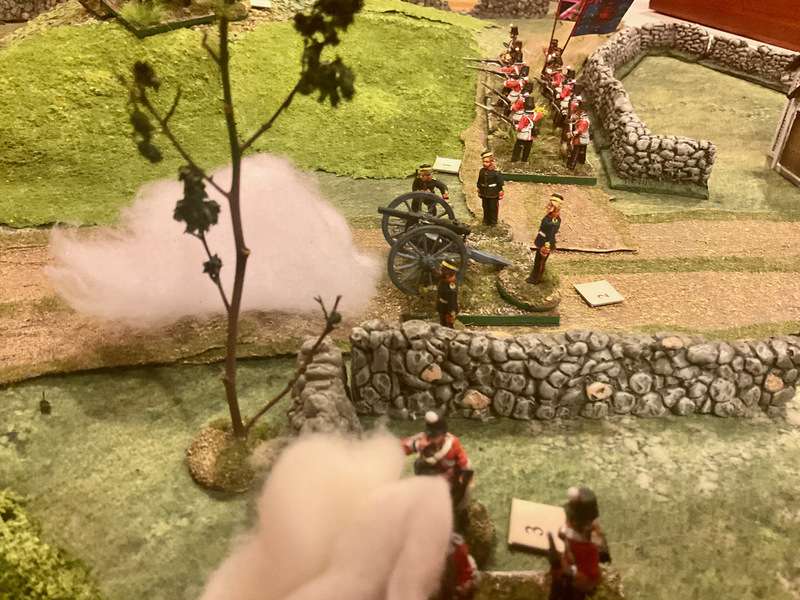 A large group of Republican infantry now unleash a devastating volley on the militia group holding a small copse on a hill above them.   They kill Cpl. Hodges and four of his redcoats, leaving the remaining four to retreat with excess shock.

The victorious Republican troops advance, only to be blasted with canister by Bdr. Boyle’s gun crew.  They fall back to rally, their lieutenant temporarily knocked unconscious. 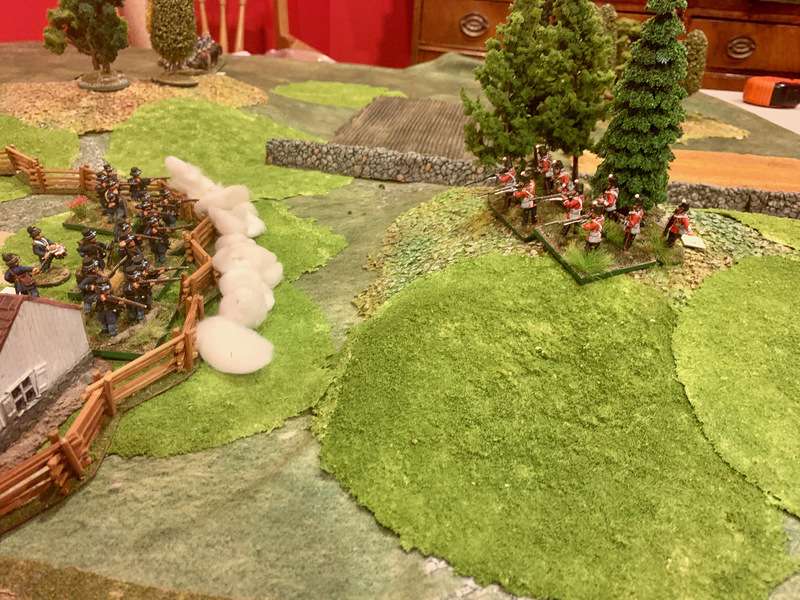 Sgt. Boscombe decides that a short and glorious life is a soldier’s destiny. He uses a pile of command tokens to spur his group in a charge with extra movement, but the Republican troops are regulars and form line, with time to present and fire a first volley, which is taken into account in their extra melee dice.  The result is that the Canadian riders are all killed save for one and the wounded Sgt. Boscombe, but the bluecoats are badly hit with casualties and shock and fall back to lick their wounds. 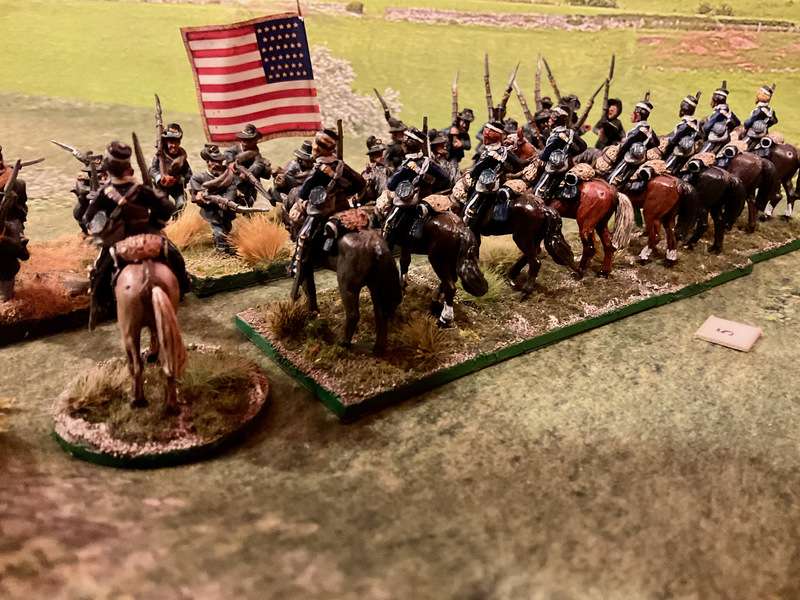 The Republican cannon now makes its presence felt.   With the Queen’s gunners have chosen to shoot canister at the closest enemy foot rather than the opposing gun, and thus take a bad hit, killing two of the crew.  Boyle and the surviving gunner now take part in an unequal artillery duel, but the next hit kills the remaining gunner and Bdr. Boyle retreats off the table with shock, one arm hanging uselessly at his side.  With his Militia slowly being picked off by skirmishers and no way to reply to the enemy cannon, Capt. Travers orders four of his men to haul the gun off the table, and concedes the fight. 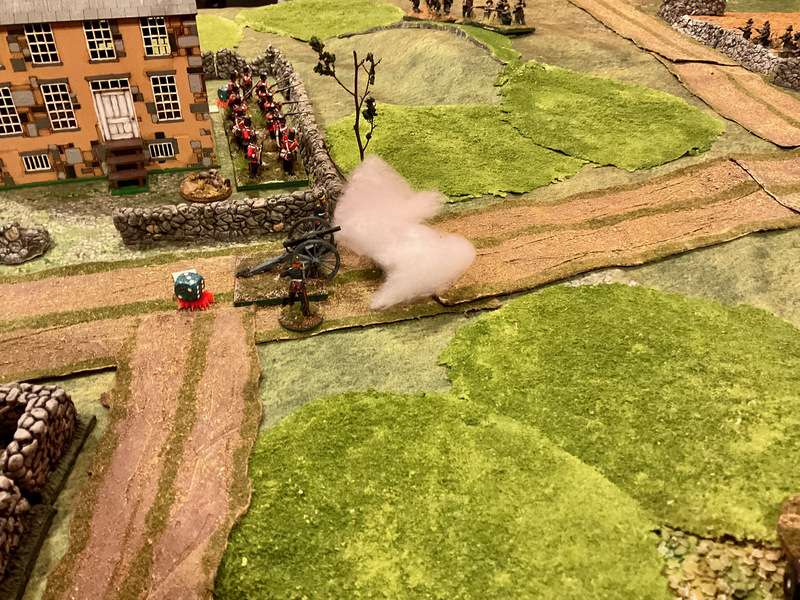 Here’s a funny thing about how characters can sometimes come to life.  To give the Dominion defenders a bit of an offset from their militia status, I gave them a Level Four Big Man officer, one of my newly painted bossy Victorians.   Incredibly, his chit only came up once, allowing him to rally the four surviving men of Cpl.Hodge’s group as they fled down their side of the hill.  After that, he did nothing, except once, when I incredibly rolled two “1”s for his movement to go somewhere and be useful.  I thus concluded that he was hopelessly drunk, and was staggering around the battlefield, being a positive nuisance and drawling nonsense in an upper class English accent.  Thus, Maj. Clive Whicker-Basquet, an incompetent but well-connected sot, is born, and will doubtless feature again in other battles.

“Have a care and hold your fire, lads, that … gentleman is in front of you!" 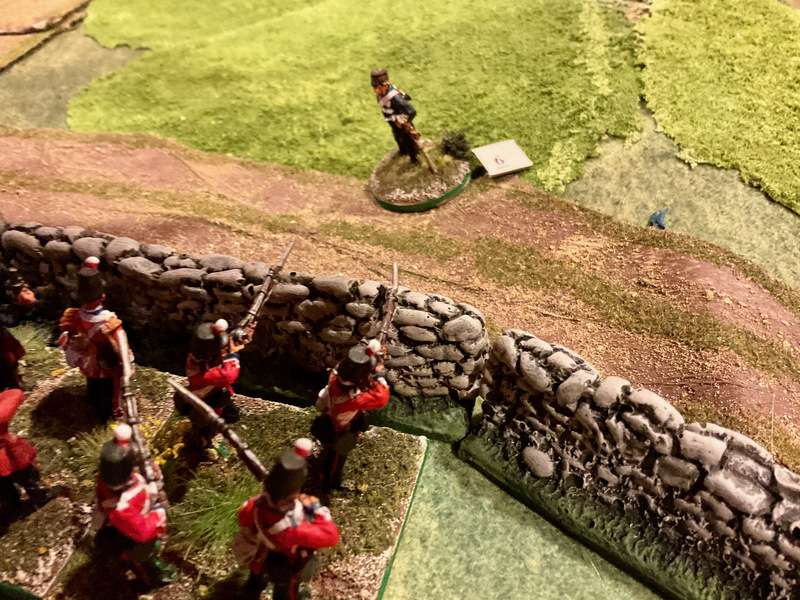 A pleasant bit of solitaire gaming and lovely to get some newly painted troops on the table with my new terrain.  The Republican side won on points, and while the defender’s force morale had not collapsed, clearly it was in their best interest to disengage and fight another day.   In a campaign game, I wouldn’t have thrown the cavalry group away, but I was curious to see how they fared against infantry.   It would have been smarter to keep them as a force in being, checking or at least slowing an advance by three times their number.