Since I don’t have a piece of wargaming terrain finished or in production at the moment, I thought I’d cheat and tell you about a piece of 1 to 1 scale terrain that has been keeping me busy of late.

This gorgeous crab apple tree sits in front of my house.  In May, when I took this photo, it is a glorious, fragrant mass of blossoms. 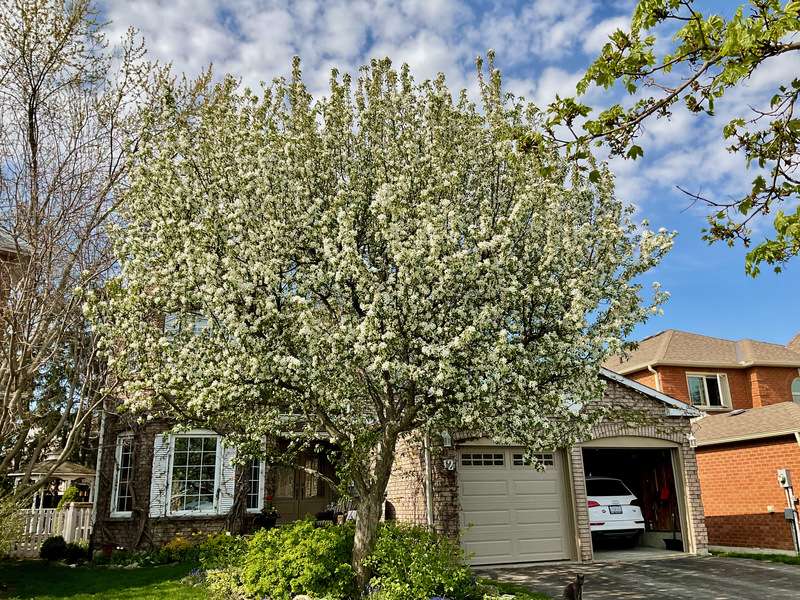 The blossoms put on a show for about a week, and then they start to fall, like a gentle snow.  They fall and fall, so that our driveway and walkway are on some mornings white as if it was winter.

By the end of May the blossoms are replaced by green leaves, at least until the gypsy moths (sorry, not allowed to call them that anymore - they are now LDD for Lymantia Dispar Dispar, or just furry hungry buggers that grow into the size of small snakes) invaded trees in the area.  The crabapple tree was a particularly tasty buffet.  All through June and July I waged war against them, picking them off, gingerly at first, and then by the fistful, and dropping them in a soapy bucket of water.  I did my best to keep the lower branches free of the caterpillars, but I couldn’t reach the upper bows, and every morning the ground was littered with fragments of leaves and tiny almost embryonic green apples.   I assumed the tree was doomed.

July came, and the caterpillars became sluggish and then disappeared.  The local paper said some sort of virus had killed them.   I found and destroyed a few cocoons, and then for a week small white moths fluttered about aimlessly, as if filled with wonder that they could fiy, albeit badly.  Then they disappeared.

August came with apples.  The tree roared back, green leaves appeared in the bare sections, and SO MANY APPLES. 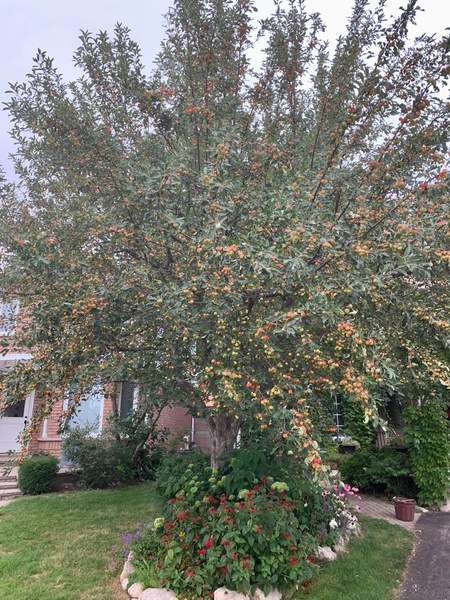 Now its the apples that fall, buckets of them every day.  I have a nifty roller tool that gathers them in a wire ball-shaped cage, and usually spend thirty minutes a day collecting them, so as not to attract wasps and alarm my neighbours, a nice young couple newly moved in who regard the tree with some alarm.  I’ve noticed they are deathly fearful of insects.   Some of the apples go into my compost bin, the rest into the city green waste bin.  My wife, who has lived with the tree longer than I have, tells me that the apples are sour and hard to cook with, so I’m content to let them return to nature and to give me free biomass for next year’s garden..

Respect for a tree that doggedly does what it wants to, bugs be damned.