Jonathan Fennell, Fighting the People’s War: The British and Commonwealth Armies and the Second World War (Cambridge UP, 2019), 932 pages.

Fighting the People’s War (FPW) was not a reading project that I approached from a wargaming point of view, but simply out of a desire to try and stay current with cutting edge military history on WW2.   After reading this massive book, though, I see some of our wargaming preoccupations with morale, troop quality, and national characteristics with new eyes.

Jonathan Fennell is a youngish scholar, who lectures at the Defence Studies Dept. of Kings College, London.  His first publication was Combat and Morale in the North African Campaign; FPW is far more ambitious, with the goal of a single-volume history of the British and Commonwealth Armies of WW2.  Rather than focus on generals, weapons systems, or battles per se, Fennell wants us to understand “the personal concerns of troops, their broad social and political perspectives, and their willingness to fight” (9).   To understand these concerns, Fennell did extensive research on the censorship summaries produced in each formation by officers who censored the troops’ outgoing letters.  These summaries were frequently produced and passed up the chain of command to help senior leaders gauge the moral and effectiveness of their men.

Fennell also focuses on the social composition of the armies that were brought into being after the outset of war.   The British and Commonwealth armies were raised from populations that were “far less fervent and less deferent” than those who supposedly flocked to the colours in 1914.  The British government knew that conscription would be necessary from the outset:  of the three million men raised to join the Army of 700,000 under arms in September 1939, three-quarters were conscripts (63).  The Commonwealth armies were volunteer forces at the start of the war, but there was little “widespread enthusiasm” to join these armies, while minority populations (Canadian French, South African Afrikans) were particularly reluctant to volunteer and even less happy about conscription.   Deferments of professional and skilled workers meant that “semi-skilled and unskilled classes … were particularly represented” in the armies.

Why did the British and Commonwealth armies perform so poorly from 1939-42, what Fennell calls the “great crisis of the Empire”?  A huge reason was lack of training.  In June 1941, for example, only ten percent of the British Army were fully trained regulars.  There was a shortage of equipment, uniforms, and training areas sufficient for a whole brigade to exercise (221).   The quality of officer training was often poor, and theatre-specific training was often left up to unit COs to implement if they felt like it, so, for example, many of the units defending Malaya were wholly unfamiliar with jungle training.

Besides the training deficit, there was what Fennell calls an “ideological deficit”.  Governments expected their soldiers to fight the Nazis and preserve the Empire, which required an “innate commitment and fighting ability of its citizens and subects” (255).   The problem was that most troops had little commitment to the British Empire (especially Indian troops), were dissatisfied with their poor pay and treatment compared to the high wages earned by skilled workers in the war industries, and had memories of the poor treatment and unemployment of demobilized soldiers after the Great War.    Generals lamented that their troops were “readier to surrender” than their foes and realized that “many of the troops still want to know what we are fighting for” (255).    After the defeat of Eighth Army at Gazala in 1942, 88 per cent of all casualties were men reporting sick or who had surrendered.   British commanders like Auchinleck asked the government to reinstate the death penalty for cowardice and desertion; these requests were refused.

By 1944, the British and Commonwealth armies had improved training, focused extensively on soldier welfare, and had learned to conserve their dwindling manpower by doctrines such as Montgomery’s set-piece “Colossal Cracks” battles.    Commanders learned to only ask “of their troops what they were capable of and trained to do” (688).   However, hard limits were reached.  The New Zealand troops essentially mutinied over a botched 1943 furlough scheme, the South African populace had largely ceased to support their government’s war effort, and the Canadian government’s attempt to introduce conscription was a military and political failure.

With victory in sight, what soldiers wanted most was an assurance that things would be better after the war – that better housing, better employment, better education would be a tangible reward for their sacrifice.  Army education schemes to help the soldiers understand what they were fighting for ironically radicalized the troops politically, which explains in part why Churchill, who cared more the survival of the Empire than he did for social engineering projects, lost the 1945 election.   Philip Zec’s famous 1945 cartoon sums up the hope of the soldiers that the peace would finally be an opportunity for the working classes.  One example of this radicalization that I didn’t know of in my own country’s history is that in 1945, Canadian progressive parties won 58% of the civilian vote and a whopping 71% of the votes of soldiers who had recently fought in NW Europe. 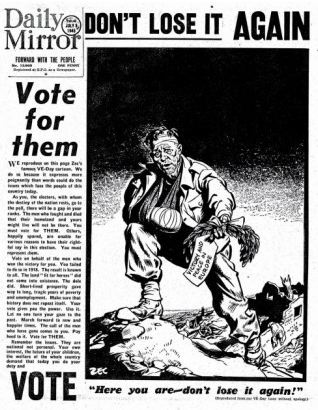 Fennell’s book has a demythologizing agenda, to be sure – he wants to debunk the idea that British and Commonwealth soldiers were “stolid … apolitical and uninterested in the broader meaning of the war” (697).   They were brave, they learned, and by the end of the war they were effective and well-trained armies that also “yearned for the camaraderie and equality of the battlefront to be present on their return to civvy street” (697).

I’m glad I persisted in reading this massive book because it took me a little closer to the mindsets of the troops who did the bulk of the fighting and dying on the ground.   As a Canadian who used to be quite the Anglophile, I always thought that the pluck and elan of the British and Commonwealth troops always got them through a tight scrape – I am sure I’d internalized old propaganda films like The Way Ahead.    In fact, the history of those armies up to 1942 is often a series of lamentable disasters as poorly trained, unmotivated, and poorly led troops learned their business the hard way while the Empire collapsed around them.    For wargaming, even in a small-scale action, Fennell’s book should lead us to question our first assumptions about troop quality, morale and training.  We can ask these questions without questioning the bravery or heroism of these soldiers.