The Mission by White Dog Games is one of those rare games where you genuinely feel like you are learning as you play.   Designed by the highly prolific Ben Madison, The Mission is a solitaire game covering the whole of Christian history from the death of Jesus to the beginning of the First Crusades.   During that time your job is to spread the Christian gospel throughout the known world, establish the church, and then defend it from enemies within and without.   At games’ end, in the 12th century, your score will determine whether Christianity survives as a world religion or as a small cult practiced in some backwards region.

The Mission is a 4X game with emphasis on the first three Xs: Explore, Expand, Exploit.  The fourth X, Exterminate, is something you try to avoid.   At first things seem easy, as the original apostles move out from Jerusalem with the gospel of Jesus.   Soon they will die and their bones will become relics, which may help you financially later in the game, but before they pass away they have, hopefully, won a foothold in each of the six geographic tracks of the game board. 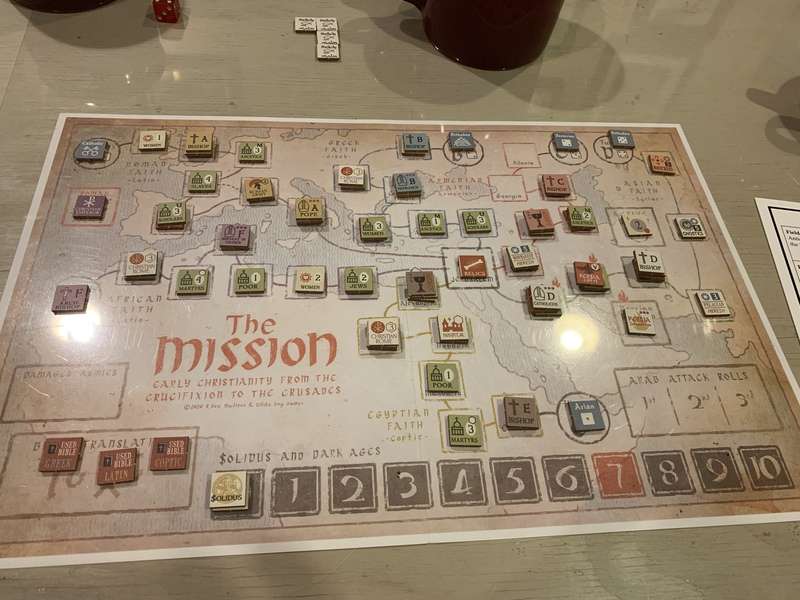 In the first phase of the game, you move further out on each of these tracks, attempting to convert regions which in turn give you revenue to fund missionaries and bishops, build key infrastructure (hospitals, monasteries, and universities), and translate the bible into regional languages (Latin, Greek, Armenian, Coptic, and Syriac).  Before Constantine, the Roman Empire can hinder or tolerate you, depending on the policies of various Caesars.   After the Empire becomes Christian, you make hay while the sun shines, because it gets tougher later on when the Empire collapses.

In the Dark Ages stage of the game, you now try to defend the five tracks against various hordes of people pushing towards the centre over 28 turns, each covering a varying number of decades.   After the fall of Rome, some of these encroaching peoples can be converted if you work at it (always convert the Saxons if you can), and others have to be resisted as best you can.  Good luck with North Africa, you’ll need it.    Later on, when you’ve hopefully got the hordes under control, the rise of Islam means that various jihads emanate from Jerusalem in the centre and try to conquer their way outwards. so you’re always fighting fires and trying to keep regions from being conquered and slipping into apostasy.   Translating the bible helps, as do various great theologians, but at the same time you’ll face challenges from local despots, schisms where various regions choose their own popes and stop talking to you or sending you money, and that perpetual annoyance, heretics.    As regions fall into heresy, you can either sweet talk them back into the orthodox faith or ruthlessly suppress them, though cruelty can work against you in the long run.

I’ve taught church history in my profession as a vicar so I thrive on this sort of thing, and don’t think there’s been a game on this subject so good since Jim Dunnigan’s venerable SPI title Empires of the Middle Ages, though the two games are only roughly comparable.  If your worldview is secular but you’re interested in the ancient or medieval histories, this game does a good job of showing you the transition from the first to the second.

White Dog Games uses a print on demand business model.  The components are attractively designed and presented, and the counters are on thick laser cut cardboard.   You’ll need four mugs or containers to hold various sets of random chits, and the game board gets more crowded as the centuries proceed.  My first game went fairly well.  The rules and player aid charts are well laid out and the rules explain themselves as you go along.

I did reasonably well for Christianity in my first game, and look forward to trying it again.  Highly recommended.  The Mission gets the Mad Padre blessing.