With four hours here in Ontario before the old year sees itself out, it seems like a good time to unveil my last completed project of the year.   Cracking on with my alt-ACW project, here are Perry Miniatures’ Canadian militia or volunteer cavalry from their British Intervention Force range.  The figures are product codes BIF 32 (Command) and BIF 34, standing with shouldered swords and stabled jackets.  I don’t know much about the organization and uniforms of the militia cavalry from this period.   There are some regiments in the Canadian Reserve Force, like the Governor General’s Horse Guards or the Queens’ York Rangers, that have pedigrees dating back to the  War of 1812, but I haven’t found much on their dress.  The uniform is my guess from one of the plates in the Osprey Book, Canadian Campaigns 1860-1870 - blue with white piping.  I have the figures for another regiment so I may do it in blue with yellow piping, just for contrast.

Sadly they don’t have a guidon bearer, though I have no idea where to source the appropriate flag or whether British cavalry units typically carried flags of any sort.  The Sergeant is single based, for use as a leader in Sharpe Practice. 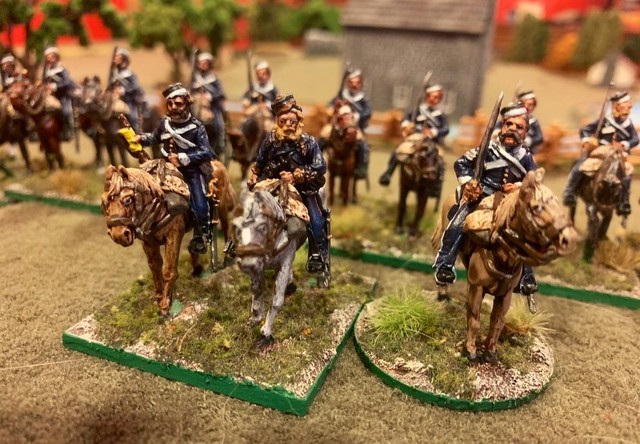 If they were anything like most Canadian militia units of the period, these fellows would most likely be gentlemen and more prosperous farmers, able to afford the horse and uniforms, hoping to impress the ladies, and probably not trained to anything near a professional standard.  Put them in the field against a trained Union cavalry unit of the 1862-63 era, and I think they’d be eaten for lunch.  You may have noticed that none of the figures are sculpted with carbines.   Again, I have no idea if carbines were issued to British cavalry of the mid-Victorian period, but having seen what Sharp breechloaders can do in my previous post, I would fear for these figures on a battlefield.  I suspect they would be employed mostly for scouting and as line of communications troops once the British Army began arriving in Canada en masse. 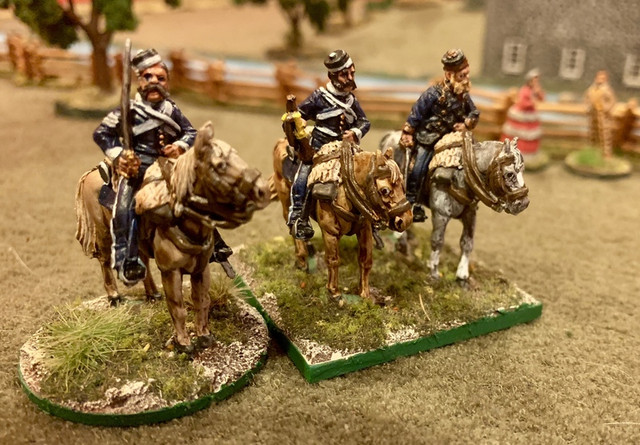 On weekend training, impressing the locals. 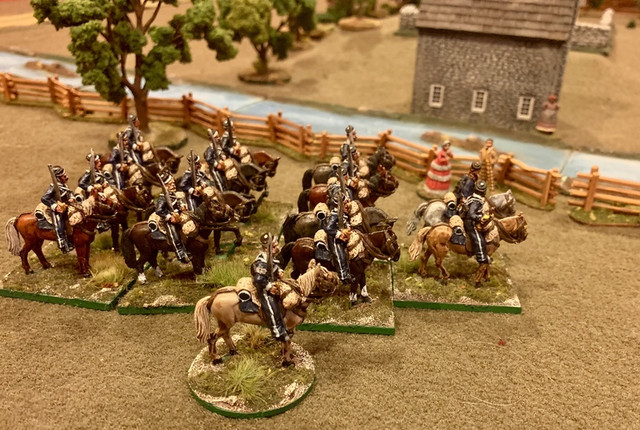 2020 saw me make a decent start on this project.  There are at least as many unpainted figures to go as you see here, so that will be a steady focus of 2021, and hopefully some battles to follow.

With that, I bid 2020 a less than fond adieu.   Joy and I were blessed with good health, and unlike many, we were fortunate enough to remain mostly sheltered in comfort, wanting for nothing, so we refuse to moan about our lot.  I missed friends and gaming in person, and I hope to see some of that resume in 2021.   May the New Year treat you and your loved ones more kindly.