Some scenic work through April has produced this charming little farm for my Dux Rohirrim project.  As most Dark Ages games seem to be focused on pillage and looting and other beastly acts, and seeing as a fair bit of beastliness goes on in Middle Earth, one needs things to pillage and to defend from pillage.

The haystacks are from a Canadian company, 6 Squared Studios, and were in hot demand at Hot Lead in March.  I grabbed the last two - yellow ochre base, wash with Army Painter Light Tone, and several successive dry brushes of light tans.   The fence sections are half a pack's worth of wattle fences by Renedra.   They do come with little feet  I have seen chaps use them to simply stand them on the table, but I am a stolid sort of fellow and wanted them to have proper bases, even if the result is that the section ends don't quite butt up against each other.  The pig is a happy little fellow I found in a toy store.   I know that Pegasus makes some plastic barnyard animals and I could use some for plunder purposes.  We all know how cranky orcs get when meat is off the menu. 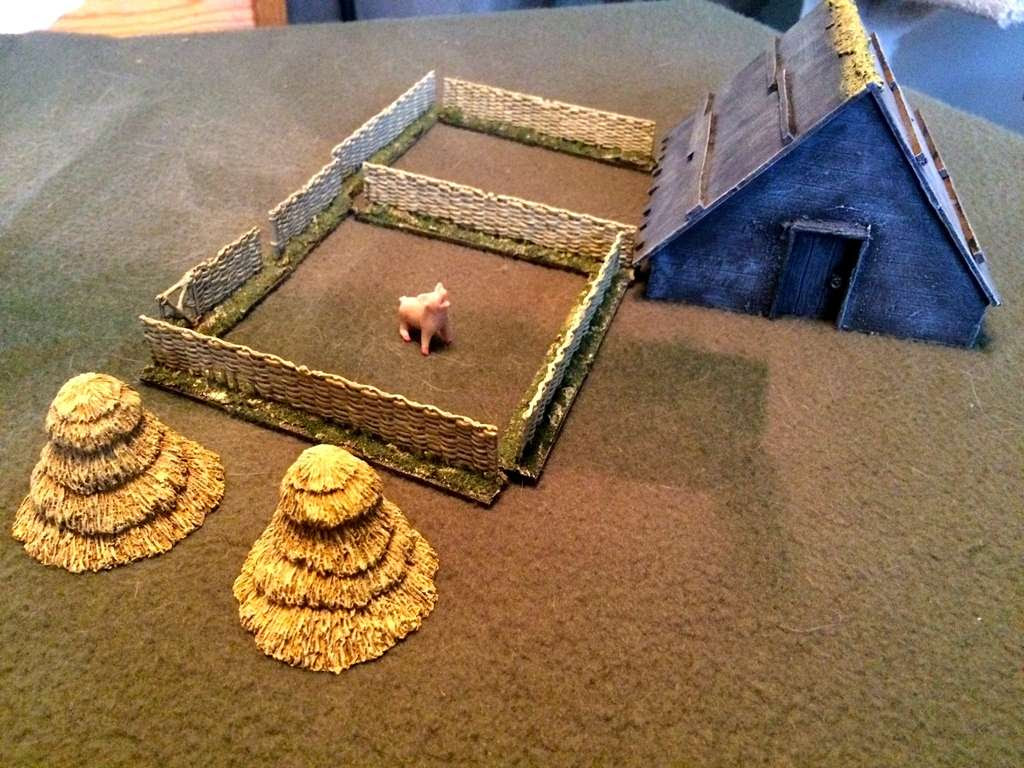 I confess I am happier with the pig than I am with the barn (if that is what it is).     It is a model kit from PlastCraft Games that Vincent from the local games store stocks.  All the cool kids are getting these, Vincent told me.   Since it was under $10, I thought it wouldn't hurt and would give me a quick medieval / Rohanish / old timey building. 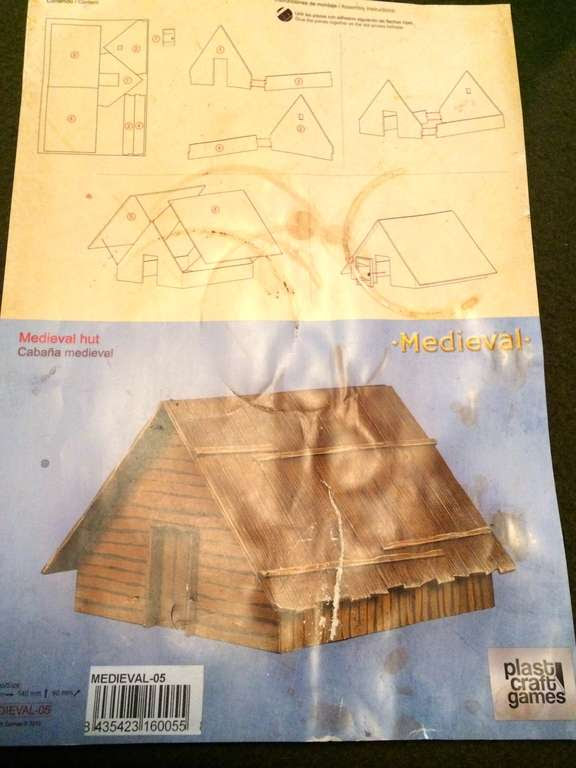 What I got for my $10 came inside a ziplock bag and was rather disappointing: Two sheets of precut plasticard pieces for the walls and roof, and a hard plastic doorframe and door made from some sort of injection moulding.  You got taken, Rabbitman wisely observed when he saw it under construction.   There was no scoring or any kind of feature on the walls and doors as suggested in the illustration - likewise the bits of wood shown on the exterior roof in the photo were missing.   I used a craft knife to score the walls and roof to suggest planking, and I cut the bottom edges of the roof pieces to make it look more like the photo.   Since the top roof pieces didn't join perfectly (I can't be sure if I should blame the model or my rotten skills), I glopped some plastic wood on top to look like a thatched crown to the roof.﻿ 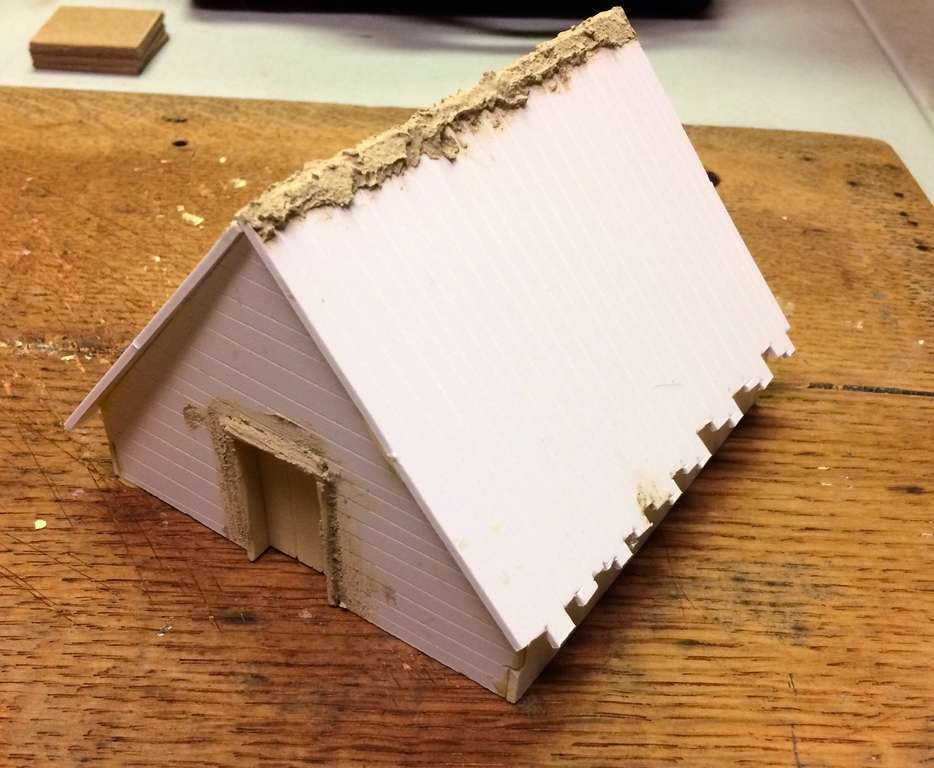 I cut some balsawood for the outside of the roof, painted it a black, heavy dark brown drybrushing and a lighter gray drybush to suggest weathering.  Since there is no chimney or opening for one, I am guessing this building is used as a barn or as storage.  It's rough and ready, but I think it will go reasonably well with my MDF Sarissa house. 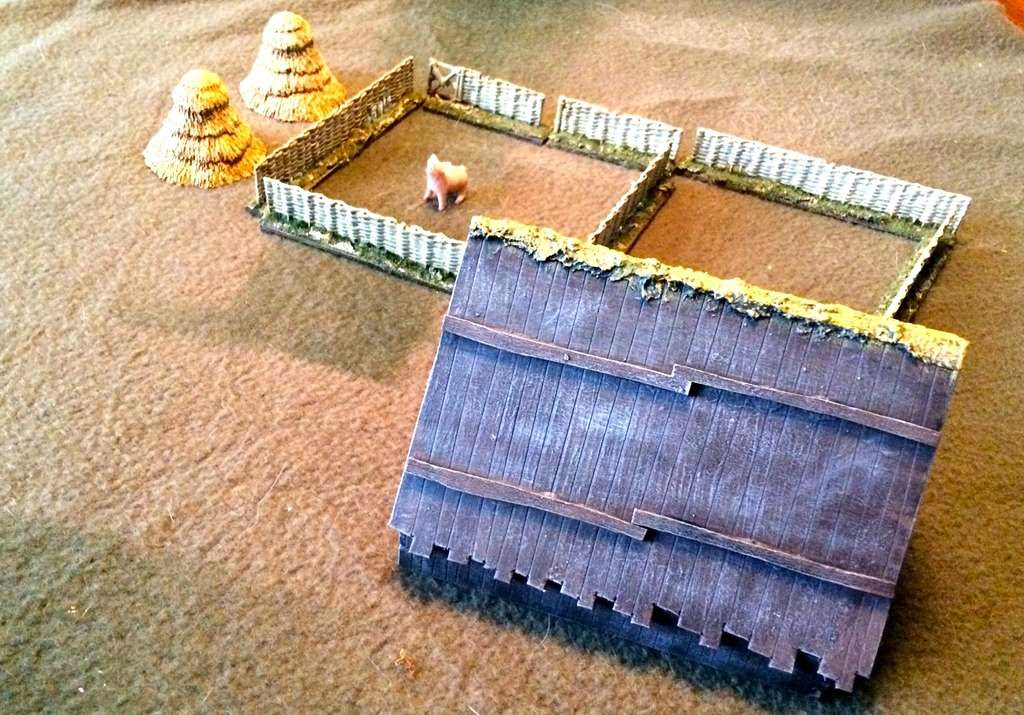 The next step is to populate the village.  For that I have this pack of Wargames Foundry Dark Ages Saxon Civilians who are next in the queue for the painting table.   I like the young bow third from left, he looks like he will be the one running to the village to warn that the orcs are on the way.﻿

I think these figures will blend in fairly well with the scenery. 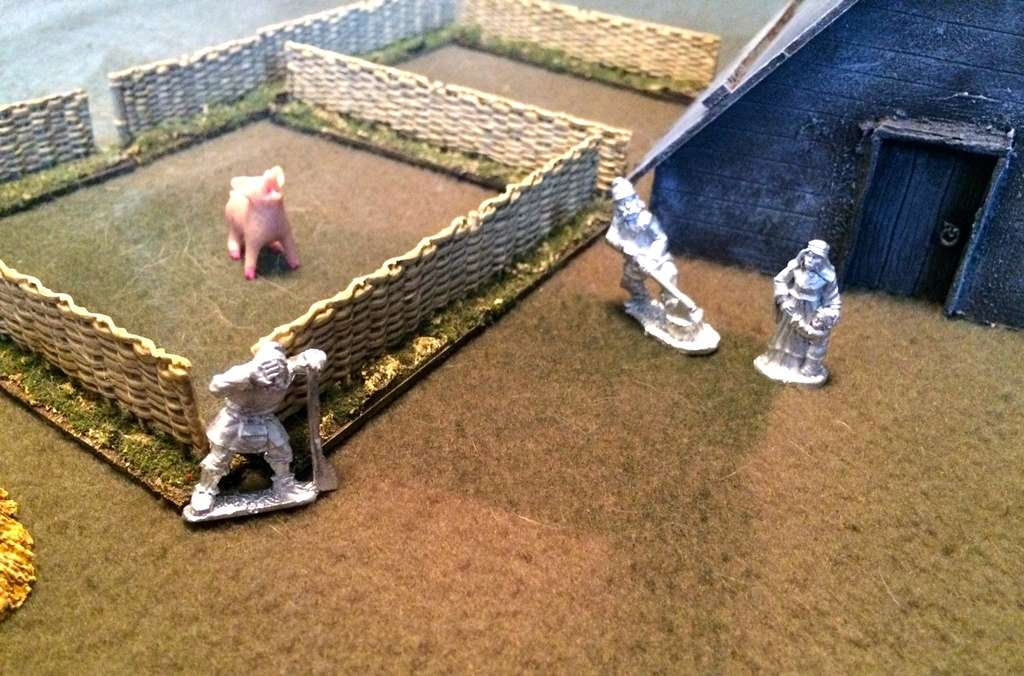 The talented and eclectic Paul from Paul's Bods blog recently showed some whimsical 20mm medieval civilians chasing geese, which I would dearly love in this scale.
﻿

Besides painting the peasants, I have some other ideas to pursue on this project.  One is building a watch tower - I think I have the plans for one from an old White Dwarf when LOTR was the big thing with GW.   Also, Rabbitman has just sent me a link to another fellow's DIY longhouse prject which looks very tempting.  Finally, there's the thought that if I was the headman of a village out on the edges of the Riddermark, with orc raids a constant source of dread, would I build some sort of palisade or stronghold at the very centre of the village for my people to take refuge in?  And, if so, would it be of stone or of wood?   I must think on this.

For my own purposes, I am going to count all the fencing sections as one terrain feature, and the two haystacks as another.  These models bring my 2016 totals to: