I had a great game last night with Rabbit Man and the gang.  I’ll write it up anon but you can read James’ account of how the Fascist hordes were stalled on the road to Moscow.

I haven’t made a plastic kit in a while.  I found this in a local hobby store some months ago and thought I’d use it to keep my hand in.  It’s the Revell Krupp Protze truck with 3.7 cm anti-tank gun. It will be useful for Chain of Command games, which make sense for my 20mm collection. 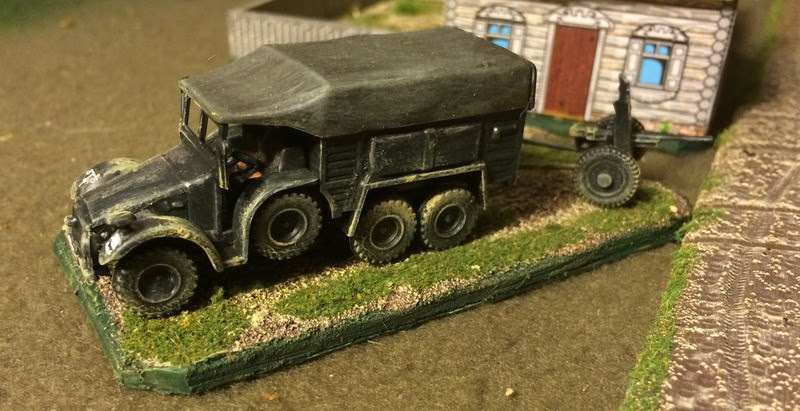 I don’t think it quite dawned on me that this was a 1/76 scale kit.   All the other Revell kits I’ve made are 1/72.  Some research on the inter webs revealed that this was originally a Matchbox kit. 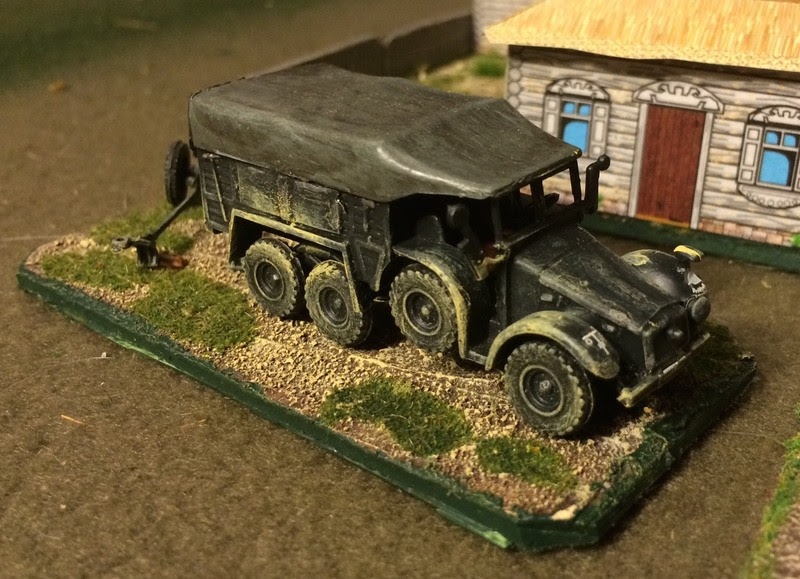 Painted with Vallejo 73.603 German Panzer Grey Surface Primer.  Drybrushed with Americana Yellow Ochre hobby paint.  I see in the photo below I forgot to dry rush the bit above the drop gate, which looks far too clean.

Nice to have a 3.7cm AT gun.  I think I’ll base it separately.  I can use the crew figures from the Matchbox Opel Blitz and 7.5cm PAK kit.

For the past two weeks I’ve been on a basing blitz.   I’ve made up MDF bases for all my 20mm German vehicles.  Each one is magnetized on the bottom, to fit into the ubiquitous cookie tins to get ready for the coming move and for better storage.   Here are the German A and B echelons.  It’s interesting to look at the various paint schemes I’ve used over the years, including the three Hanomags, a grey and rust pattern which I think I originally took from a Matchbox paint guide in my youthful naiveté.  There are two Pz MkIIs and a Pz 38 in that paint scheme which I haven’t based yet.