My Hundred Days, Or, Napoleon Bonaparte, My Part In His Downfall

It seems there were refights of the Hundred Days battles all over the world last week, and Toronto was no exception.  Last Sunday I was invited to play in a re-fight of the battle of Ligny, hosted by a gentleman named Glenn Pearce who, along with his circle, call themselves the Napoleonic Miniatures Wargame Society of Toronto, now in their 50th year as a club.  That seemed a pretty large claim to fame, so I was keen to attend.  Glenn learned of my existence through some Naps posts on this blog, which shows how useful the internet has been.  I recall in the early 1990s how difficult it was finding opponents in one’s area.

I had to leave early on Sunday morning to drive clear across Toronto to Glenn’s home in the eastern suburbs.   When I arrived in his comfortable basement, this is what I saw. 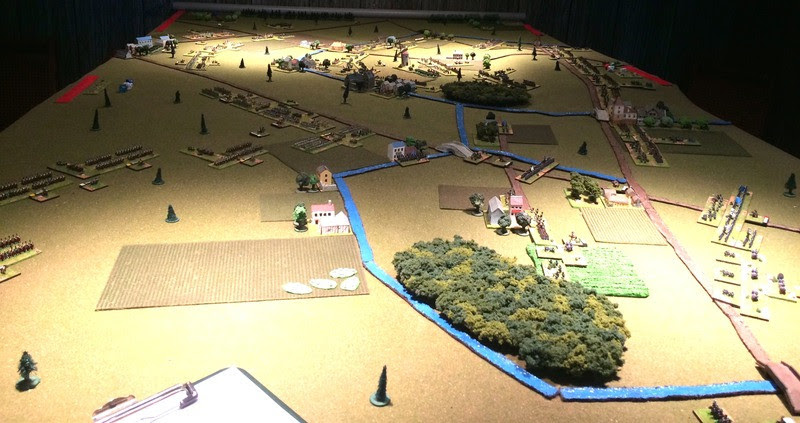 I was one of two Prussian subordinate commanders supporting Glenn as Blucher, facing two French players.   Here’s the centre of the Prussian position with the famous windmill in the centre, as the artillery fire commences.  All figures are 6mm, from Glenn’s collection as far as I could tell.  The club has been playing Baccus’ Polemmos rules for years, but after finding their Marechal d'Empire rules to be dissatisfying, have been writing their own.  I hope it isn’t betraying a confidence to say that these rules will be forthcoming from Baccus in late 2015 or early 2016.

I was given the role of Von Thielman, commanding the Prussian III Corps.   On my immediate left were the cavalry brigades of Von Marwitz and Von Luttum under Von Hobe.  These two brigades took up much of my attention in the morning.  Here Von Marwitz watches the French cavalry of Pajol approach. 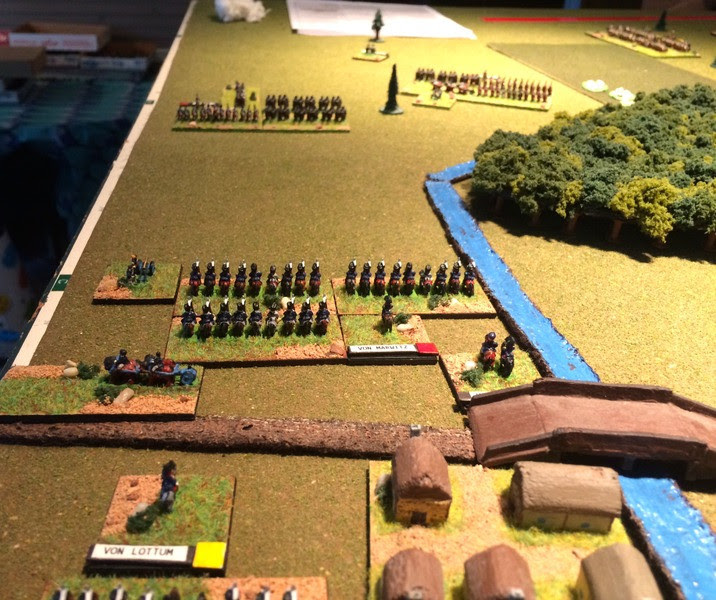 Players of the Polemos system will understand the basic mechanics of these modified rules.  Both sides start each turn with a random amount of Tempo Points, which are modified by their army cohesion levels, and then bid for initiative.  Tempo Points (TPs) need to be distributed to brigade commanders to effect outcomes on the battlefield.  Not all sub-commanders are created equal, and some require more TPs than others.  The side with initiative requires less TPs do perform actions in a turn than the side without initiative, though the player without initiative can spend extra tempo points to seize the initiative and allow brigades to move before the enemy does.   In this case, part of the French plan was to push hard at the wings and force Blucher to spend TPs to shore up his flanks, leaving him without a full hand of TPs to counter the main French blows in the centre.

Here Marwitz confronts the lead French cavalry brigade under Soult (the Marshall’s little brother).  Marwitz was quite a good commander as the Prussians went, and led a charmed life, leading two successive charges to throw Soult’s Division back.  He bought quite a lot of time holding the left flank for Blucher, but sadly, he led one charge too many and fell to French blades.   Von Lottum’s cavalry did not do so well and the French horse began to push back the Prussian left. 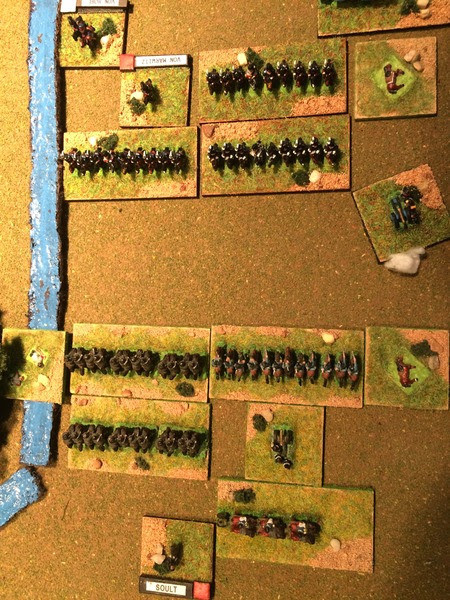 All this skirmishing left me unable to really follow the action in the centre (it was a big table) but here you can see that the French have breached St. Amand on the left and are pushing hard on Ligny village in the top centre.   Lobau’s VI Corps was marching hard towards the Prussian centre left and the Guard was moving to threaten the right.   One of the things I liked about these rules is that each brigade/division has its own integrity level, and its chances of remaining on the table depend on the number of its elements are eliminated or routing.  As the weaker Prussian brigades, primarily of Landwehr, began to disintegrate, the Prussian army cohesion level fell.  This had the effect of giving Glenn a Blucher fewer TPs to work with, and gave the French the initiative more often.  It became harder and harder for him to give me the TPs I needed on my flank, since he was weighing my requests against his own needs and that of my colleague, the right wing sub-commander. 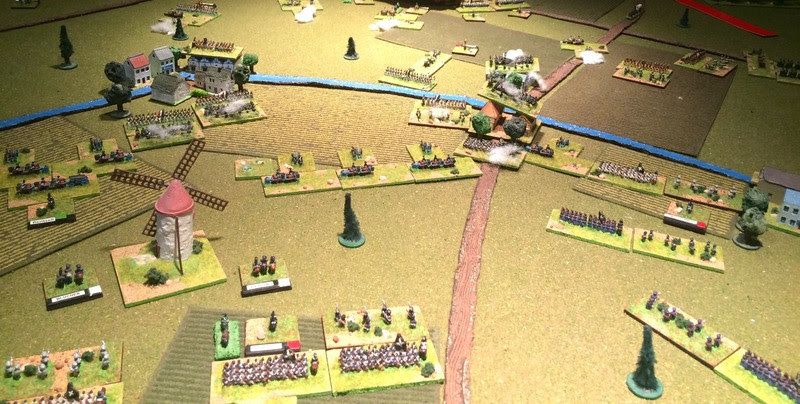 A reprieve for me, as Prince Wilhem’s cavalry corps arrives to shore up my left flank.  By this time Marwitz and Lottum are done.  Just below the woods, Subervie’s cavalry are in a position to roll up the Prussians struggling to hold the French of Lobau.  Because of the shortages of TPs mentioned above, it was difficult for me to really use these reinforcements effectively.  They kind of just sat and watched things. 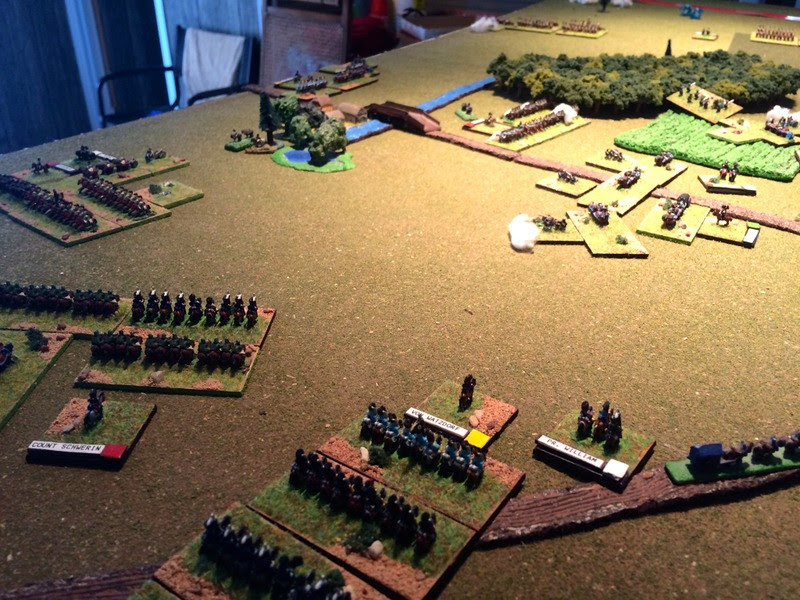 My infantry under Thielman are being pressed hard. 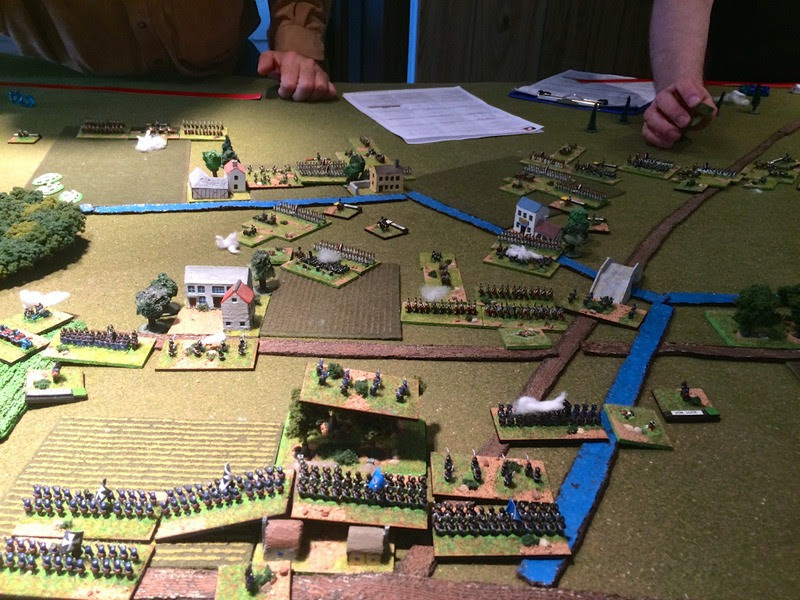 On the right things are heating up.  The Prussian cavalry mass on the flanks of the Young Guard, and do a grand job of checking that advance.  I couldn’t really follow this flank well, but it was a huge fur ball when we called the game at 4pm.   By then we agreed that the French were leading in all categories, having far fewer casualties, a higher army cohesion level, and more TPs in hand each turn.   Time for Blucher to fall back on Wavre.  Vorwarts, my children! 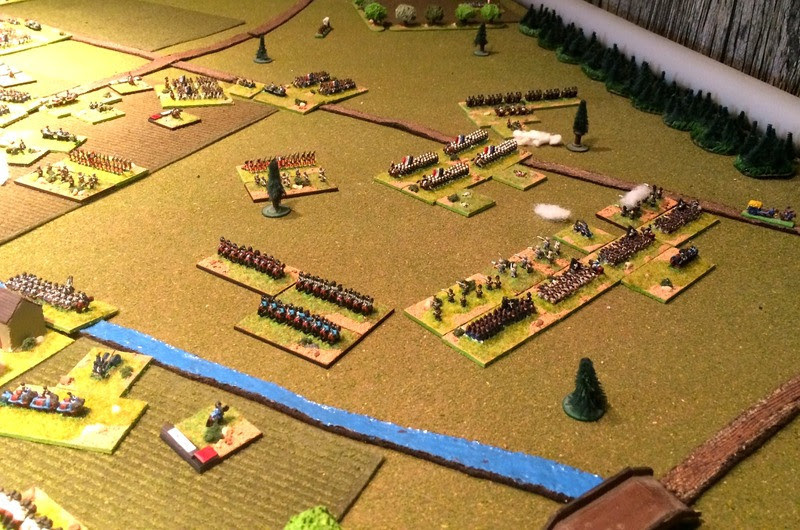 Notice anything odd about Napoleon?  Our host has replaced Boney’s face with his own in a number of famous portraits of Bonaparte.  That says something about a healthy ego, I think. :) 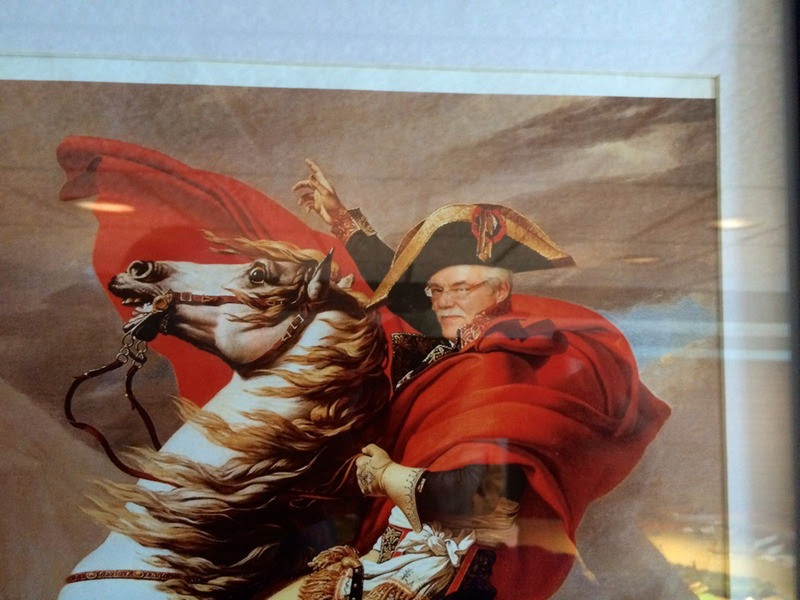 In conclusion, this was a grand day of gaming in a grand scale, with some good fellows.   It’s always awkward to be the new boy at the club, and to eat up precious gaming time with explanations (sometimes several were needed to explain the same point) but Glenn and his friends were generous to a fault.  I like the way they model command and control, and while some of the mechanics too a while to get used to (for example, artillery is restricted to a straight forward fire zone rather than the usual 45 degree fire zone on each side, and artillery used in long range fire cannot be used to defend or support a defence in close combat).  I don’t foresee many Sundays free in the year to come, as I expect to be doing some substitute ministry this fall and winter, but I hope to play with these fellows again.