We are now seeing the long, grinding scrum of the endgame.

Turkey’s weight of numbers begins to tell in the Balkans.  If you’re wondering what happened to the Italian army in Serbia, and why it couldn’t retreat to Trieste, it’s because Tri was contested in a standoff in the S1906 turn, and a province where there was a standoff is not a valid retreat destination.   It will be interesting to see Di Graspi explain this debacle, though I understand that Italy is now ruled by a military junta so he doesn’t have to answer to anyone.

France has now started to retaliate for the sneak attack by Italy, and is cooperating with the Turkish army trying to break north from Naples.  We’ve seen a second Miracle of Rome, but the sound of guns is getting closer and ruining the mornings of people taking espresso and biscotti in the cafes.  Maybe time to go visit Milan or Florence, where it’s safer?

England is playing a patient game.   Did it just betray the Sultan by occupying Moscow?  And what is that Fleet in the English Channel doing?

Perhaps the next issue of the Daily Dissembler will shed some light on this confused picture. 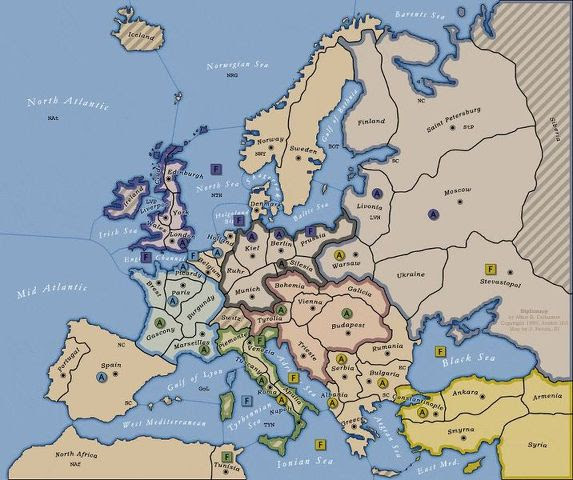 
General Notices:
All dislodged units destroyed; advancing to next phase.Order
resolution completed on 28-Nov-2014 at 09:20:54 EST

No order for unit at Silesia. Hold order assigned.Germany:
A sil Holds

A bud Supports A ser - rum

A gas Supports A pie - mar Support cut by Move from Spain.